By our correspondents
18 November 2017

The Socialist Equality Party (SEP) and International Youth and Students for Social Equality (IYSSE) held a strong public meeting at Colombo’s New Town Hall last Sunday to commemorate the centenary of the Russian Revolution. About 150 workers, students, youth, professionals and housewives, including SEP/IYSSE members and supporters, attended the event, which featured a screening of Tsar to Lenin, the authoritative documentary on the 1917 October Revolution.

The meeting was live-streamed through the SEP Facebook page. Around 300 watched the event online, among them party members and supporters in Jaffna in northern Sri Lanka and supporters of the International Committee of the Fourth International (ICFI) in Chennai, India.

Centenary meetings are being held throughout Sri Lanka and internationally by the ICFI. Four days earlier, a meeting and screening of Tsar to Lenin were held at Peradeniya University in Kandy, the hill country capital. On December 16, another meeting will be held in Galle, the southern capital.

In preparation for the Colombo event, SEP/IYSSE members campaigned in working-class areas and universities in and around the city, distributing leaflets and discussing the significance of lessons of Russian Revolution with workers, youths and students. 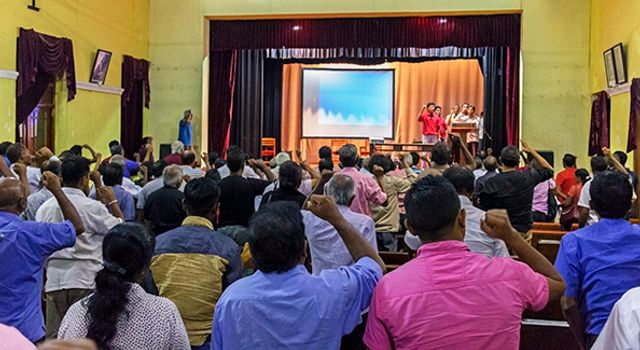 The audience singing the Internationale

Chairing the event, SEP political committee member K. Ratnayake began by sending the party’s warmest greetings to comrades in Jaffna, Chennai and internationally. He said the aim of the centenary meetings and online lectures organised by the ICFI “is to build the necessary revolutionary leadership for workers and youth coming to struggles worldwide.” Everywhere, people faced “attacks by capitalist ruling classes, including a world war drive, creating similar conditions to those that drove Russian workers to take political power 100 years ago.”

Citing remarks made by David North, the chairperson of the international editorial board of World Socialist Web Site, during his online lecture the previous night, Ratnayake pointed out that “the ICFI is the only organisation in the world, which represents true heritage of Russian Revolution.”

By contrast, Ratnayake said, pseudo-left groups held centenary meetings to prevent workers and youth from challenging capitalism. United Socialist Party (USP) leader Siritunga Jayasuriya had recently told one these meetings: “The USP joins hands with the FSP [Frontline Socialist Party], as Lenin and Trotsky did on the eve of the Revolution, gathering all those on the left.” 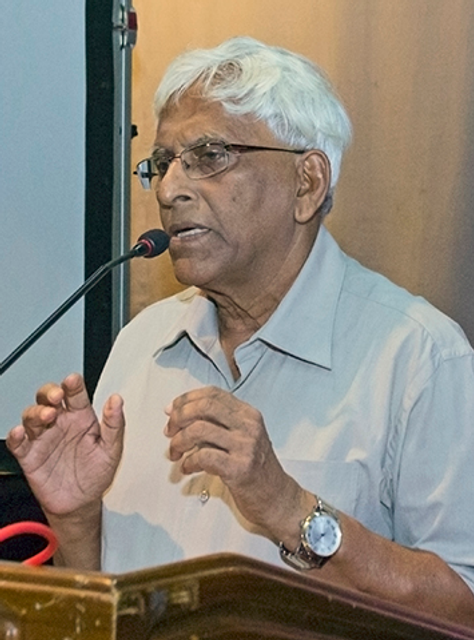 Ratnayake explained that contrary to Jayasuriya, the seizure of power by the Russian working class in October 1917 was prepared by intense “political and theoretical struggle waged by Lenin and Trotsky” against every opportunist tendency. Without that, “the October Revolution would have been impossible and counterrevolution would have triumphed.”

The main speaker, SEP general secretary Wije Dias, pointed to the world historical significance of the Russian Revolution. It marked the opening of a new progressive epoch in the development of human civilisation. Despite the later betrayals of counter-revolutionary Stalinism, the revolution had immense achievements, including in advancing the economic and social standards of working families in a vast region of the globe, based on the nationalised property relations established after the revolution.

Dias outlined the electrifying inspiration that workers and youth throughout the world, and the oppressed masses of the colonial countries of every continent, drew from the call issued by the Bolshevik Party, led by Vladimir Lenin and Leon Trotsky, for liberation and peace in the midst of the barbarism unleashed by World War I.

The speaker referred to the deepening breakdown of the capitalist world economy since 2008, and the military aggression and inter-imperialist rivalries engulfing the globe once again. “What these developments glaringly express is that the fundamental contradictions that ferociously broke onto the world political arena in 1914, in the form of the world war, have not been resolved.” 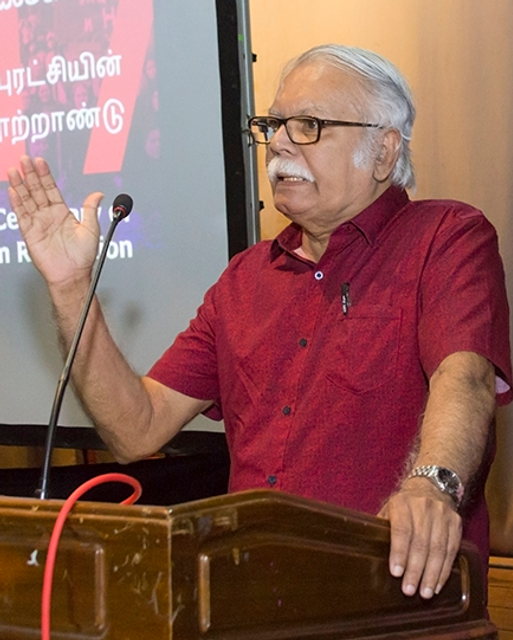 Dias said the perspective of the October Revolution was based on Trotsky’s theory of permanent revolution, which demonstrated the necessity for the working class to take power. He said ferocious condemnations of Trotsky and Trotskyism today reflected “the desperation of the imperialist ruling classes.” The speaker referred to slanderous campaigns against Trotsky by ruling class-funded academics and the Google censorship seeking to prevent people accessing the WSWS.

“But the struggles of the working people and the youth are emerging in different forms at various points of the world arena, sharply raising the need for the perspective and leadership of the world socialist revolution.” Today’s pseudo-lefts called for “broad fronts,” just as the Mensheviks, Social Revolutionaries and other “lefts” opposed the Bolshevik struggle for the working class to take power in 1917.

The speaker cited Trotsky’s 1932 Copenhagen speech, titled “In Defence of October,” in which Trotsky said: “The active intervention of the masses in historical events is in fact the most indispensable element of revolution.”

Dias concluded: “It is with unflinching confidence in such a process that we have taken the conscious decision to train the present generation of the working class and the youth in the lessons of the 1917 Revolution so they can play the leading role in the coming revolutionary struggles under the banner of Trotskyism—the program of socialist internationalism.”

The audience warmly received the screening of Tsar to Lenin, which was preceded by a brief introduction by SEP political committee member Pani Wijesiriwardane. Indicating intense interest, books worth nearly 10,000 rupees were sold at the SEP literature table and more than 11,000 rupees donated to the party’s building fund. 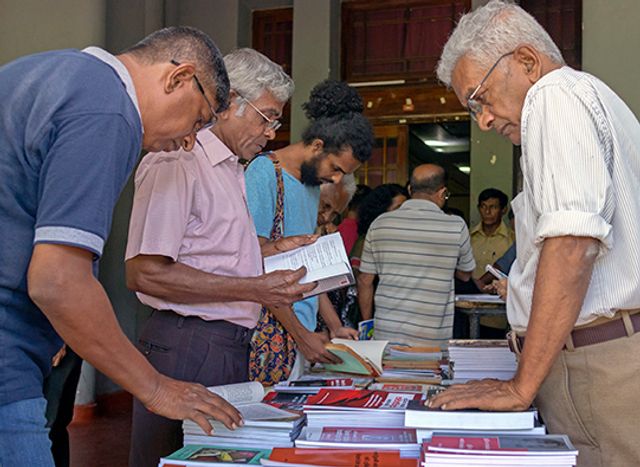 After the meeting, several audience members gave comments to the WSWS.

Anusha, a political science student said: “Although I had heard about the Russian Revolution I didn’t have a detailed knowledge of it. I became curious to know what socialism is after meeting IYSSE campaigners. I have now read The Historical and International Foundations of the SEP. After listening to the speeches here, my understanding of the contents of that book, particularly on the background in which the Fourth International was founded, further developed. I like socialism as a social system, offering equal opportunities for all.”

Ajith, a doctor, said: “I was working for the JVP [Janatha Vimukthi Peramuna] until a breakaway faction formed the FSP in 2012. I am disillusioned with both these parties. I have been following WSWS and SEP because I felt the working class needs an alternative. I attended this meeting because I think educating people with the lessons of the great October Revolution is very important today for future struggles.”