By our correspondents
16 December 2017

On December 10, Indian supporters of the International Committee of the Fourth International (ICFI) held a successful public meeting in Sriperumbudur, a global auto and electronic hub about 40 kilometres from Chennai. It was a part of the ICFI’s global campaign for the release of framed-up Maruti Suzuki workers.

ICFI supporters in India conducted a month-long campaign in the workers' residential areas in and around Sriperumbudur and the Oragadam Special Economic Zones (SEZs), winning significant support for the campaign.

Workers from Renault Nissan and Integral Coach Factory (ICF) were among those attending the meeting, which was conducted in Tamil and English and streamed live via Facebook. A summary of the speeches was given in Hindi.

Just as the meeting was about to start, two officials from the Crime Investigation Department (CID) of the state police, attempted to enter the hall, claiming that prior police permission was required. They were stopped at the entrance by meeting organisers who insisted that the indoor meeting did not require a police permit. The discussion continued for nearly 15 minutes before the CID officials ended their attempts to disrupt the meeting.

Last April, when ICFI supporters held a demonstration for the jailed Maruti Suzuki workers at the Sriperumbudur bus terminal, police and CID personnel took photographs and videotaped the event in an attempt to intimidate participants.

Sathish Simon, who chaired the December 10 meeting, explained that the lifetime imprisonment of Maruti Suzuki car assembly workers at Manesar in the northern Indian state of Haryana, was the product of a frame-up by the company, Indian police and judicial authorities. Eighteen other workers from the plant have been jailed for three to five years on lesser charges. 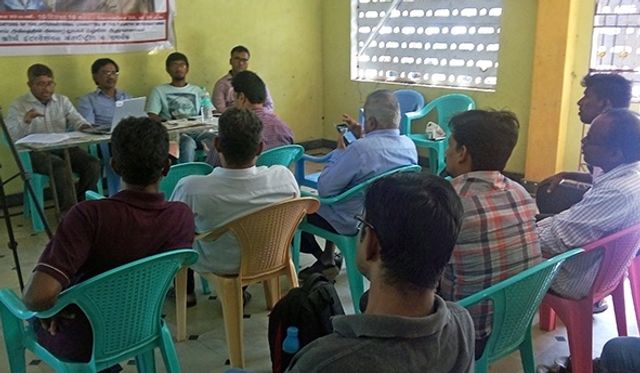 A section of the Sriperumbudur meeting

Simon explained that the Maruti Suzuki workers were targeted because of their involvement in a series of militant struggles, including strikes, plant occupations and demonstrations, against the slave labour conditions at the plant.

Yuvan Darwin, addressed the meeting, exposing the legal travesty of the prosecution case. Referring to five-part WSWS series on the frame-up, he pointed out the obvious inconsistencies, gaps and contradictions in the evidence and the trial.

He told the meeting that the police did not conduct a free, fair and impartial investigation into incident at the Manesar plant on July 18, 2012, which was seized on by the management and the police to launch their witch-hunt against workers.

The police planted evidence, forged medical reports and tutored or coached witnesses, he said. The prosecution failed prove any evidence against the convicted workers. The judge was forced to exonerate 117 of the 148 originally accused because of the lack of any, even fabricated evidence .

Arun Kumar, who delivered the main report, explained how the company provoked the July 18 altercation, which led to the death of Human Resources manager Avineesh Dev, and the subsequent frame-up of 148 workers on murder charges and also the firing of 2,300 workers.

“The courageous struggle of the Maruti Suzuki workers from mid-June 2011 to till mid-2012,” he said, “has shaken the Indian capitalist ruling class because it represented a pole of opposition to the brutal conditions of exploitation that prevail throughout the Gurgaon-Manesar industrial belt and across India.”

Commenting on jail sentences, Kumar said: “These harsh sentences were aimed at crushing all opposition to the sweatshop conditions that prevail in India’s industrial belt, which is home to massive transnational corporations, such as Japanese-based Suzuki Motors, Ford, BMW and General Motors.”

He continued: “In mounting an international campaign to secure the release of the jailed Maruti Suzuki workers, the International Committee of the Fourth International sought to mobilise the international working class in a common struggle against globally-operating transnational companies.”

Kumar explained the political role of India’s Stalinist parties, and their affiliated unions, in isolating the militant struggles of Maruti Suzuki workers. He pointed out how this had emboldened the Indian ruling elite’s ongoing assault on the working class.

Kumar reviewed the principled record of the WSWS, which defended the Maruti Suzuki workers from the outset, published numerous articles and statements on the frame-up, and provided on-the-spot reportage from Gurgaon.

Renault Nissan workers spoke with WSWS reporters after the meeting, explaining their working conditions and offering their support for the campaign to free the jailed Maruti Suzuki workers.

Chandrasekar, 30, a Renault-Nissan worker for the last seven years, previously worked at Hyundai auto plant. He spoke about the sudden disappearance of several companies from the Sriperumbudur and Oragadam Special Economic Zones.

“Companies like Nokia, Foxconn and BYD operated here for less than ten years but they have shut down and gone to other countries. We are facing a similar situation with our company and cannot confine our struggles just within the state of Tamil Nadu.

“I welcome your fight for the rights of Maruti Suzuki workers. This is the first time I’d heard about such an international organisation. I agree we have to confront the global corporations and need to fight for the unity of the international working class. When workers’ struggles erupt in these companies, management is most likely to shut down and shift to other countries.”

Ramesh, 27, another Renault-Nissan employee, pointed to the complicity of all the Indian political parties with company management. “All the parties work in favour of the global companies. They never talk about the problems of workers in these companies.

“The AIADMK and the DMK, the two major parties in Tamil Nadu, claim that employment is generated by the investment of global companies in the state and therefore workers must collaborate with them. But, as you have said, foreign companies only invest here because they want to exploit the cheap labour and can make huge profits,” he said.

“At Nissan we are fighting to form an independent union and against the company stooge union. If we are successful, we will fight for the betterment of the condition of contract workers just like the Maruti Suzuki workers did.”

“We agree that release of the jailed Maruti Suzuki workers depends on the international mobilisation of the working class. You can always count on our support for your international organisation.”

Jawahar, 28, said that the working conditions at Maruti Suzuki were similar to those at Sriperumbudur. “Workers employed in most of the companies come from agricultural families in the villages. Most of the educated from the villages migrate to the cities in search of better jobs,” he said.

“Most of the political parties, especially major parties, have contacts with these companies and gain by supplying contract workers,” Jawahar added. “How can they take up the fight for workers’ issues? We are interested to know more about your international organisation.”