The Falsification of David King’s work—Red Star Over Russia: A Revolution in Visual Culture 1905-55 at the Tate Modern in London

I have commented on several art exhibitions marking the centenary of the 1917 Russian Revolution. Certain common themes have emerged.

The Revolution, curators have told us, was a coup carried out by a handful of Bolsheviks and a deviation from the natural development of “Holy Russia” towards democracy. Exhibition catalogues have regurgitated the historical lie that the betrayal of the working class and international socialism by the bureaucratic apparatus headed by Joseph Stalin was the inevitable outcome of Bolshevism and of the revolution itself. Leon Trotsky, if he has been mentioned at all, has been trivialised—the outmaneuvered loser in a personal power struggle with his canny rival, Stalin. 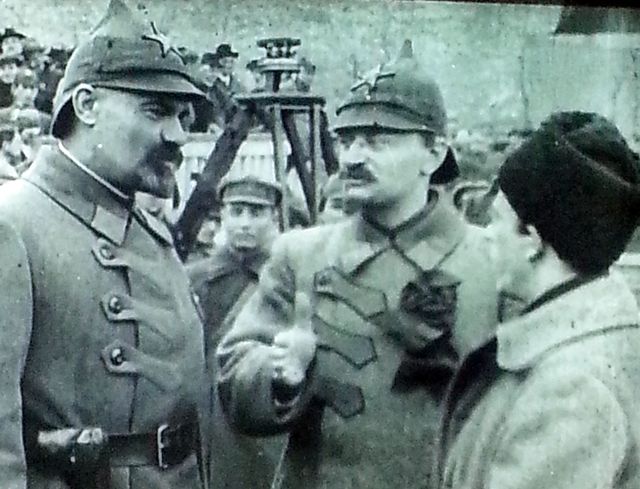 I had some expectation that this falsification of history would be remedied by the Tate Modern Red Star Over Russia exhibition. After all, the majority of exhibits are from the unique 250,000-strong collection of photographer, designer and archivist David King. He was so keen that his life’s work go on display and reach a wider audience that he virtually gave his collection away to the Tate for £1.5 million (or £6 per object!) a few years ago.

In addition, until he died, aged 73, in 2016, King was personally involved in preparations for the exhibition—named after his seminal work, Red Star Over Russia: A Visual History of the Soviet Union.

In that book and other publications including The Commissar Vanishes: The Falsification of Photographs and Art in Stalin’s Russia and Trotsky: A Photographic Biography, King provides the clear historical and political background needed to understand the graphic material that he rescued from oblivion. In accompanying texts to the illustrations, King sought to reveal the historical truth about the 1917 Russian Revolution and, above all, about Trotsky, whom he always insisted represented an alternative to Stalinism and dictatorship.

The suppressed and hidden imagery of Trotsky and his supporters in the Left Opposition, possession of which in the Soviet Union could have led to arrest, imprisonment and execution, became a key component of King’s collection. King also collaborated with the International Committee of the Fourth International (ICFI), including on How the GPU Murdered Trotsky, published in 1976, which detailed the Stalinist plot against Trotsky’s life and the operations of the deadly network of GPU agents in and around the Fourth International.

However, the Tate Modern exhibition abandons this orientation entirely. Gallery director Frances Morris brazenly declares about King, “Had he lived this would have been a very different project, but early on we made the decision to respect his spirit without imitating it.”

This decision and the claim that keeping the exhibition deliberately low key in terms of history and politics would somehow allow the images to “speak for themselves” are diametrically opposed to King’s approach. His “spirit” is thereby also eviscerated.

Moreover, politics and history of course are not abandoned. Where there is any explanation, a different politics is substituted that distorts and falsifies history. Statements such as “[T]he Bolshevik coup of 25 October 1917 led to Civil War between the Red Army and a much more diverse White Army opposing unelected Bolshevik power,” are standard anti-communist slanderous fare. The Red Army was “diverse”—workers and peasants, men and women, Russians and national minorities, intellectuals. But it was united in defence of a great liberating and popular revolution that had established the world’s first workers’ state. The White Army was led by monarchist or fascist elements, backed by the imperialist powers that sought to overturn that revolution through a bloody Civil War.

In the exhibition, Trotsky’s role as president of the Petrograd Soviet, organiser of the uprising, head of the Red Army and leader of the opposition to Stalinism, something King spent his life uncovering and popularising, is again excised. 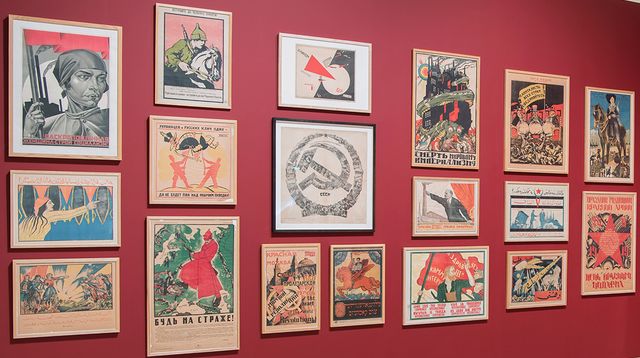 Trotsky makes an appearance in the second gallery at the Tate Modern on a stunning wall of early agitational posters in various languages, appealing to the oppressed in Russia and internationally. However, there are no translations or explanations of the posters or any indication in the “Be on Guard” poster (bottom of second column) that the figure in military uniform bestriding Europe is Trotsky and that the text, indeed, is written by him.

In a side room to the third gallery, short videos show Trotsky at a demonstration in Red Square in 1922 and speaking at the Sverdlov University in 1924. The spontaneity and enthusiasm of the occasions and the way Trotsky fraternises with workers and soldiers contrast with the third video of Soviet leaders standing aloof on Lenin’s tomb in 1927, minus Trotsky, the year he was expelled from the Central Committee. Although the information board is titled “Trotsky Vanishes”, none of the reasons for his expulsion, exile and eventual murder—the bitter disputes over perspective and programme—are given. Instead, a “power struggle” between two individuals is served up as the explanation.

Trotsky makes another appearance—among photographs and prints on display in gallery four—in a front-page cartoon in the satirical magazine Crocodile in 1927. The gallery’s caption for the cover, which displays anti-Semitic imagery, blandly says, “An internal feud within the Bolshevik party followed Lenin’s death. The Left Opposition made up of Leon Trotsky, Lev Kamenev and Gregory Zinoviev challenged Stalin’s leadership. Satirical magazines with official backing, such as Crocodile, exposed the opposition to ridicule. Here, they are shown in the guise of street musicians without an audience.” 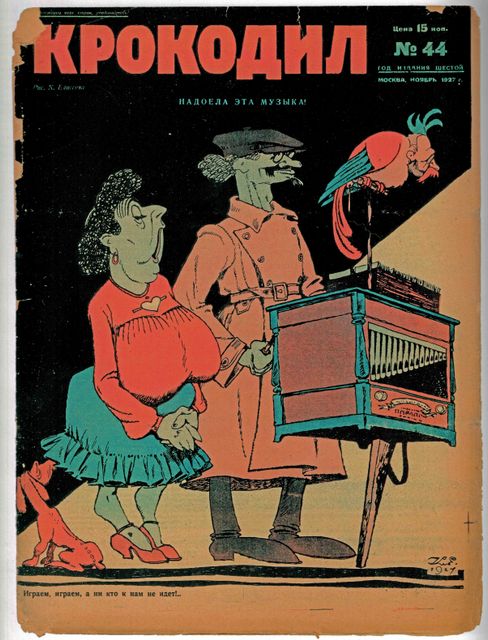 That is all the Tate has to say about the titanic struggle between the opposing perspectives of world socialist revolution defended by Trotsky and the Marxist opposition, on the one hand, and the Stalinist bureaucracy’s advocacy of “socialism in one country”, on the other—a struggle that was to play a major role in determining the course of the 20th century. The supposedly “absent audience” for Trotsky was physically eliminated in its hundreds of thousands by Stalin with purges, arrests, show trials, labour camps and executions.

The sixth room at Tate Modern contains images of some victims of the Stalinist Terror, but no one would guess that Trotsky and Trotskyists were the main target. A large display table contains police photographs of political prisoners, many arrested and executed in the first of the 1936-38 Moscow show trials, including one of a bewildered Zinoviev, a member of the Bolshevik faction from its creation in 1903 and head of the Communist International. Why Zinoviev was tried and shot (on charges being a leader of a fictional Trotskyite-Zinovievite Terrorist Centre) is not evident. 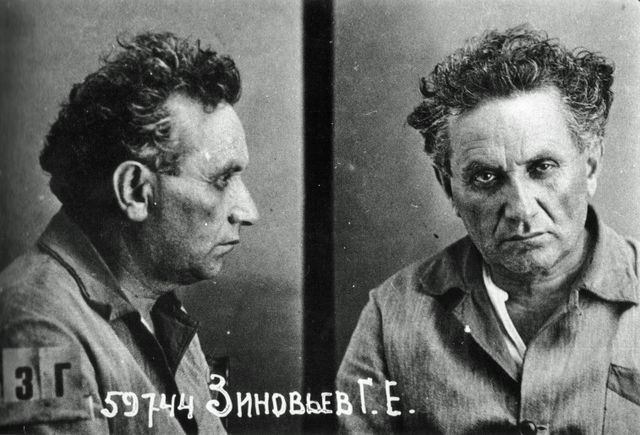 Despite the Tate’s distortions, the power of the post-revolutionary images shines through. Russia: The Way It Was, The Way It Is, The Way It Will Be, a 192-page book containing 450 high quality photographs from the 1860s until 1932 is a revelation. There are marvelous images of revolutionary sailors from the cruiser Aurora and women as soldiers, a soviet delegate and judges. Put together by Hungarian writers Sándor Márai and László Dormándi for publication by a German publishing house, Russia: The Way It Was never saw the light of day as a result of Nazi and Stalinist censorship. The exhibition is the first time the photographs have been displayed in public.

The vibrant creativity of avant-garde artists inspired by the revolution is represented in the Constructivist and Suprematist works by couples such as Alexander Rodchenko and Varvara Stepanova, Gustav Klutsis and Valentina Kulagina, and El Lissitzky and Sophie Lissitzky-Küpppers.

From the late 1920s onward, they and scores of other artists were accused of abstract formalism and their art groups and institutions dissolved and replaced by “unions” imposing Socialist Realism, the Stalinist caricature of art. Many avant-garde artists did their best in increasingly repressive conditions to produce striking imagery and innovative and interactive design to depict the Soviet Union’s spectacular social and economic advances. On display are the results of their efforts in publications such as the catalogue of the Soviet pavilion at the International Press Exhibition in Cologne in 1928 and the magazine, The USSR in Construction.

Launched in 1930, The USSR in Construction continued publication until 1941. But by then its leading contributors were under arrest or executed, including Klutsis, whose posters probably promoted the cult of Stalin more than any other.

The height of Socialist Realism conformity is displayed in three huge studies for murals in the Soviet pavilion at the 1937 World Fair in Paris and depict Stakhanovite workers [workers under Stalinism who were supposedly surpassing production goals] marching resolutely in front of the never to be built Palace of the Soviets in the background. It is the first appearance in the UK of the paintings on loan from the Perm state art gallery.

One hundred years after the overthrow of the Tsarist autocracy and the coming to power of the Bolshevik Party, the Tate and other artistic institutions continue to wage a concerted campaign to denigrate the Russian Revolution and insist it has no relevance in the 21st century. This only testifies to its enduring impact and intense political relevance.

The vilification of the Revolution is encouraged both financially and ideologically by the Russian ruling elite, as the recent Russian TV series denigrating Trotsky shows. In this way, they seek to justify their power and obscene wealth acquired by the looting of state assets that followed the collapse of the Soviet Union and restoration of capitalism. 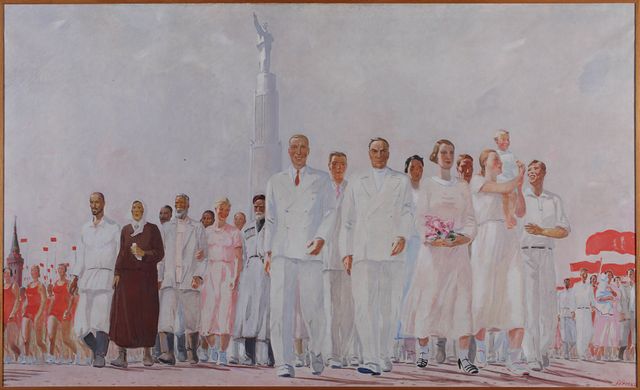 Art is an important source of patronage, influence and money-making—nowhere more so than in deregulated London. This year’s Russian art exhibitions have relied on billionaires linked in one way or another to Russia for support, including at the British Library (Mikhail Fridman) and Royal Academy (Leonard Blavatnik). The Tate exhibition is taking place in the recently opened Blavatnik wing and curated by Natalia Sidlina, who is supported by Leonid Mikhelson’s W-A-C Foundation.

Throughout this centenary year, the International Committee of the Fourth International commemorated the October Revolution by studying and explaining its origins and significance, centered on a comprehensive online lecture series. We have explained to advanced workers and young people internationally the central lessons to be drawn from October—above all significance of the defence of international socialism by Trotsky—first as the leader of the Left Opposition and later as the founder of the Fourth International—against the nationalist betrayal of October by the Stalinist bureaucracy. Those who have been introduced to this history will understand very well why the Tate Modern and leading lights within the “artistic world” try so desperately to denigrate that struggle and excise Trotsky from history.