UK: Thousands to see in the New Year sleeping rough on the streets

Last week, a committee of MPs in the cross-party Public Accounts Committee were forced to acknowledge that homelessness was a “national crisis.” They cited a report from the Local Government and Social Care Ombudsman that more than 9,000 people are rough sleepers and 78,000 families are living in temporary accommodation in England alone, including 120,000 children. Many of these are working families who have been made homeless due to the rocketing cost of private rent.

And the numbers are rising. 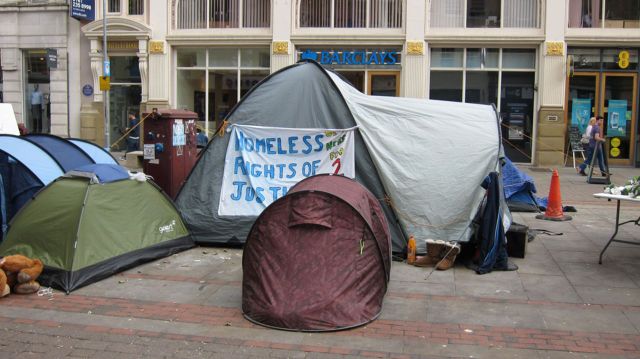 Among the poorest—those at or below 60 percent of the median income—are some one-and-a-quarter million people classed as destitute, including 312,000 children.

The destitute, as defined by the Joseph Rowntree Trust, are “people [who] have: slept rough, had one or no meals a day for two or more days, been unable to heat or to light their home for five or more days, gone without weather-appropriate clothes or gone without basic toiletries.”

The figures are startling in one of the richest countries in the world. Hunger has now become endemic, with severe levels of poverty forcing many to turn to food banks or other charities just to survive.

Earlier this year, a cross-party panel of MPs warned that up to 3 million children risk going hungry during the school holidays, when children from poorer families can no longer access free school meals.

A recent article in the Manchester Evening News alerted readers to a food bank in the town of Heywood, outside Manchester, which had run out of food.

Father Paul Daley, who runs the food bank from nearby St. Joseph’s church, told a World Socialist Web Site reporter that this crisis was caused “not because people are giving less,” but because “demand is increasing.”

“There has been a phenomenal response [donations from the public] since the article,” he said. 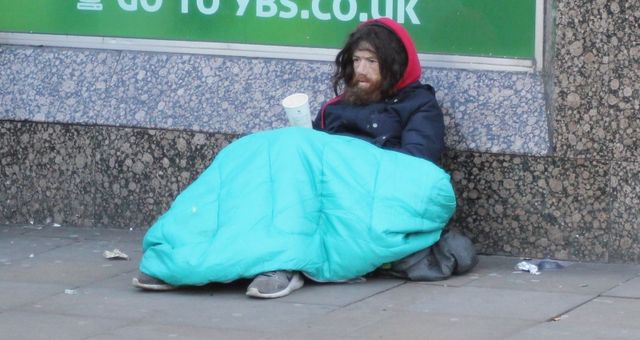 A homeless man in the Piccadilly area of Manchester city centre

Last year, the Wood Street Mission charity, based in Manchester city centre and established in 1869, helped 2,000 Greater Manchester families with donated food and toys over the Christmas period. Due to their work, 4,500 children were able to receive gifts on Christmas Day last year.

Just before Christmas, the manager of the Wood Street Mission, Des Lynch, who has worked for the charity for 20 years, spoke about its work to the WSWS.

He explained that the families the Wood Street Mission staff meet are referred to them by health visitors, mental health nurses or social workers. The help they give is varied—from donations of nursery equipment such as cots and prams, to the provision of school uniforms in the SmartStart project at the beginning of the school term.

“Last New Year we distributed £6,000 worth of brand new coats,” explained Lynch, “because poorer kids turn up at school cold and wet.”

To help children live normal lives, 10,000 chocolate eggs were distributed to them last Easter. “Every year we have a book club,” he said. “We hire a venue, take 3,000 books, and invite the kids in—they can take the books they want.”

Lynch emphasised, “There are 50,000 in poverty in Salford and Manchester today. ... If we’re dealing with 7,000 over Christmas last year, the point is we’re not even scraping the surface.”

Since the international banking collapse in 2008 and the bailout by the Labour government, it is the working class, not the rich, who are paying the price—through endless austerity cuts, the creation of precarious work and a low-wage economy, and changes to the benefits system. Successive Labour and Conservative governments have eviscerated the welfare state.

“We have seen an increase in families coming to us who are in work of some kind,” said Lynch. “Zero hours contracts are not helping. You can be the best budgeter in the world, but if you’re only working 12 or 14 hours a week, how can you possibly budget?” 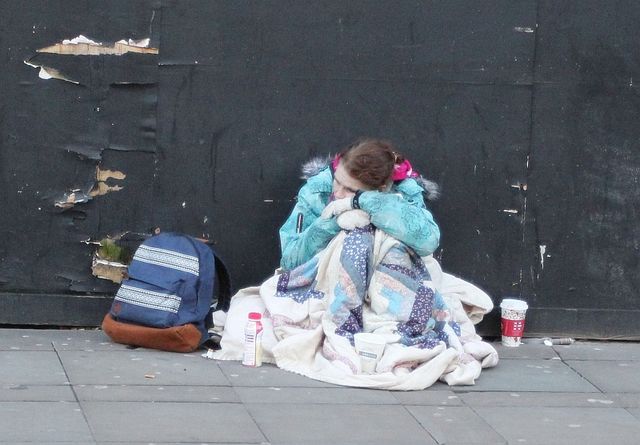 When asked if he thought the election of a Jeremy Corbyn-led Labour government would do anything to alleviate poverty, he replied with an emphatic “No!”

“We’ve had multiple changes of government since the Mission was founded in 1869, and no government of any colour has ever tackled child poverty, whether Labour, Lib[eral] Dems [Democrats] or the Tories. If we change the government tomorrow, would it make a difference?”

Increasing inequality is visible in all the major cities of the UK. “Manchester is extremely affluent. … But walk 20 minutes out of the city centre, the people on the outskirts don’t venture in, they don’t feel they belong, it’s too expensive for them. ... Take Ancoats [a gentrified former working class city centre district], it’s totally socially cleansed.”

From Manchester’s main Piccadilly railway station, every few feet there are homeless people snatching some rest in shop doorways, with their only protection against the elements a few blankets and perhaps a sleeping bag.

In 2015, the Labour-run Manchester City Council obtained a court injunction to remove makeshift tent cities that had sprung up to provide rough sleepers with some shelter from the cold.

This month, the Salford Star reported there has been an “explosion” in homeless squats in the past three years in Greater Manchester, coinciding with the rollout of Universal Credit—the new benefit system aimed at cutting welfare spending and further impoverishing the working class. A Freedom of Information request from Greater Manchester police files revealed 850 squat incidents and 39 evictions.

The number of privately owned empty properties far exceeds the number of homeless adults and families. The skyline of Manchester, as in other major cities, is being transformed by cranes and new residential tower blocks. These are not being built for working people, but as luxury apartments to be sold as buy-to-lets at exorbitant rents. No cheaper council homes are being built, when at least 80,000 are needed nationally.

People sleeping rough since 2011 has increased by 134 percent, while the number of families in temporary accommodation has risen by 60 percent since 2010. The Public Accounts Committee report condemns the attitude of the Department for Communities and Local Government as “unacceptably complacent.” The government has cynically committed to eliminating rough sleeping by 2027—10 more winters!

UK local authorities crack down on the homeless
[21 November 2015]