No decline in Michigan poverty since the Great Recession

Despite a drastic fall in the official unemployment rate for the state the same percentage of Michigan households are living below the poverty line today as did after the onset of the Great Recession in December of 2007.

According to new income and poverty statistics from the US Census Bureau released in early December, Michigan’s poverty rate was 16.3 percent at the end of 2016, the same annual rate calculated as an average for the five-years from January 2008 through December 2012. The current rate is not much lower than the peak annual poverty rate of 16.9 percent reported for the five-year period of 2010-14.

Unemployment has been below five percent in the state since the end of 2015, down from a post-recession peak of 14.5 percent in 2009. However, this month Michigan unemployment ticked up slightly, to 4.5 percent.

The proliferation of low-paying temporary and part-time jobs in the auto industry, a process enshrined in the sellout contract imposed by the UAW in 2015, has been a key factor in the general decline in living standards in Michigan. According to data recently reported by the Michigan Department of Technology, Management and Budget wages in manufacturing jobs in the state are down by $2.00 an hour, from a high of $22.73 before the crash. 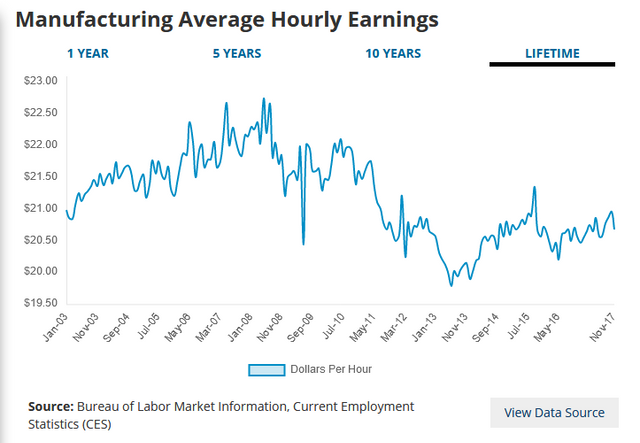 Manufacturing wages in Michigan are down by $2.00 an hour, from a high of $22.73 before the crash

Behind the apparent contradiction between declining unemployment rates and the ongoing high official poverty level is the massive and increasing income and wealth inequality in the US. As Karl Marx established over a century ago, poverty at one pole of society is complemented by obscene levels of wealth at the other. The three top American plutocrats, Amazon’s Jeff Bezos, investor Warren Buffett and the co-founder of Microsoft, Bill Gates, now own more wealth than the bottom half of the US population, 160 million people.

Like Trump’s glorification of the ever-rising bubble in the stock market, Obama pointed to job growth when characterizing his administration as “the best time to be alive.” Michigan’s Republican Governor Rick Snyder and the Democratic Mayor of Detroit Mike Duggan have incessantly boasted of the declining unemployment and job creation as signals of a recovering economy.

Unsurprisingly, the Wall Street Journal recently touted that Michigan had “increased sharply” its “capital investment and hiring.” The paper praised policies that repealed personal-property taxes for manufacturers and right-to-work legislation, policies taken from the Republican playbook and implemented in the state.

The latest Census figures demonstrate that poverty remains a chronic condition in Michigan despite this supposed resurgence in the state’s economy. Even so, the official poverty rate grossly underestimates the depth of economic want.

In the US the official poverty level is not measured as a percentage of median income, as it is in many other developed countries, but on a far narrower measure related to food costs. Poverty for a family of three is pegged at a derisory $20,000 a year, far below sixty percent of Michigan’s current median household income of about $52,400 and drastically below the amount needed to support a family.

Sustained high rates of poverty over nearly a decade have had devastating personal implications. A family’s meagre resources can dwindle as successive years’ income deficits are never offset with rising income. They have had an equally devastating societal impact.

There are smaller communities in the state where there are indications poverty has increased dramatically. The large increases in poverty in these small communities indicate how a relatively small economic disruption can have a huge effect on living standards for a village or town.

For example, some villages in the Upper Peninsula with populations in the hundreds saw double digit increases. In Baldwin, which is located toward the middle of the state’s lower peninsula, poverty increased from a third of its one thousand plus residents in poverty in 2008-2012 to well over half now.

The December ACS release shows that in the five-year look-back from the end of 2016, there was an increase in poverty in half of Michigan’s communities of all sizes over the average recorded in the five years that followed the onset of the recession. Communities located throughout the state saw such increases.

Flint and other cities such as Jackson, Lansing, Detroit, Muskegon, Bay City and Ann Arbor showed small increases in their poverty rate. Other cities with comparable population sizes had poverty rates that declined, albeit slightly, including Grand Rapids, Kalamazoo and Saginaw.

Detroit, Michigan’s largest city, recorded a shockingly high official poverty rate of a 39.4 percent using the five-year ACS average. The city’s poverty rate was one percentage point higher than the 38.1 percent average for the years 2008 through 2012.

Whole cities with substantially sized populations like Detroit and Flint have average poverty rates that are more than twice the state poverty rate. The high rates in some cities reach the level of poverty concentration that is utilized by social scientists to identify neighborhoods endemic to urban areas where pervasive poverty seriously debilitates families and social structure.

Inequality is driving communities to be divided by income like never before in recent history. The growth in concentrated poverty nationwide was noted in a Brookings Institution report last year. According to the report, between 2005-09 and 2010-14 the number of such high poverty neighborhoods in the US, where more than forty percent of households are below the official poverty line, grew by more than 4,300.

By the end of 2016 Detroit, along with Cleveland, had a poverty rate a full ten percentage points higher than the city with the third highest poverty rate in the country, Philadelphia. Detroit Democratic Mayor Mike Duggan’s recent re-election campaign relied on the narrative of an ongoing “Detroit comeback” based on highly concentrated downtown real estate investment.

Detroit’s poverty statistics present a window into the effect of exploding growth in temporary and part-time jobs and parallel wage stagnation and how it has affected workers struggling in the lowest-paying jobs.

Thirty-six percent of Detroit residents now work for less than $15,000 a year. Twenty-five percent of residents do not have access to a car. Industrial jobs have hemorrhaged out of the city over the nine years since the recession. Suburban jobs require serious time and expense to reach as the mass transit system in the area is barely functional.