Half a million metalworkers participate in strikes in Germany

On Friday, the all-day warning strikes in the metal and electrical industries concluded. According to the IG Metall trade union, assembly lines were shut down at 97 companies, with around 304,000 employees. Overall, more than 500,000 workers participated in the 24-hour strike that began Wednesday.

In both Bavaria and in Baden-Wurttemberg, the entire auto industry was shut down Friday. Workers went on strike at numerous shipyards and in the Airbus plants in Hamburg, Bremen and Lower Saxony. In addition, more than 56,000 employees at Volkswagen sites in Wolfsburg, Salzgitter, Braunschweig, Kassel, Emden and Hanover stopped working temporarily.

The determination of workers to fight the companies is enormous. IG Metall limited the strike votes to just under 280 selected companies, but everywhere the call for strike action reached 95 to 100 percent support. Workers are resisting years of wage-cutting and increased workloads that have brought billions to executives and shareholders. For example, the Daimler Group reported record sales and net income on February 1. Shareholders alone were promised dividends of up to €4 billion. 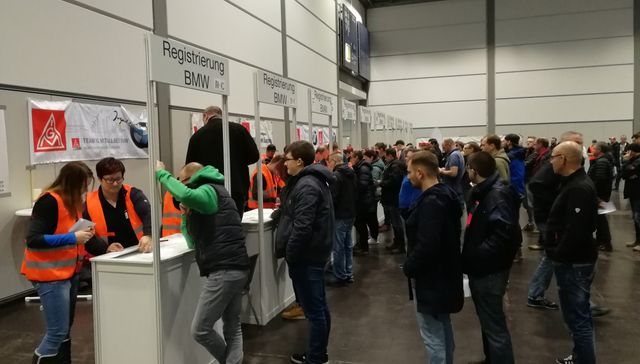 However, IG Metall is equally determined to reach a sell-out deal with the companies. On Friday, union leader Jörg Hofmann declared: “Now it’s up to the employers to understand this signal and put it on a clear footing. If the employers show this willingness, the negotiations can be continued on Monday.” According to a report by the Stuttgarter Nachrichten, the unions and employers have already agreed to continue negotiations on Monday to quickly conclude the pilot contract for Baden-Württemberg. “Behind the scenes, the thread of conversation never broke down anyway,” writes the newspaper.

IG Metall has called the strikes to control worker anger. Especially in view of the social attacks and rearmament plans of a future German government, the unions expect fierce resistance.

The fact that the unions fully support the right-wing agenda of another Grand Coalition government between the Social Democratic Party (SPD) and the conservative parties was expressed at the recent Trade Union Council. According to a report by Der Spiegel, various union representatives put pressure on SPD leader Martin Schulz to retain Sigmar Gabriel as foreign minister. In recent months, Gabriel has been driving Germany’s return to an aggressive foreign and great power policy, demanding, among other things, that Germany must again act as a “carnivore” in the world arena.

IG Metall supports the militaristic and anti-working-class policy of the Grand Coalition and is doing everything it can to demobilize workers. It has systematically separated the strikes and has avoided any major joint strike action or demonstration. At the picket lines and at the countless mini rallies outside factory gates, one encounters almost exclusively union and works council officials.

In Leipzig, IG Metall moved the registration for the striking workers away from the picket lines to the fairgrounds. There, the employees of the Porsche plant were called in on Thursday and thus kept completely separated from the workers of the BMW plant who came the day after. The scenery was more reminiscent of a post office than a strike.

Dilakshan, who works at Daimler Axis Mettingen, said that workers did not participate in the pickets because they knew that they were dominated by hated union and works council officials. Workers were told that they would not have to picket to get strike money, Dilakshan said. 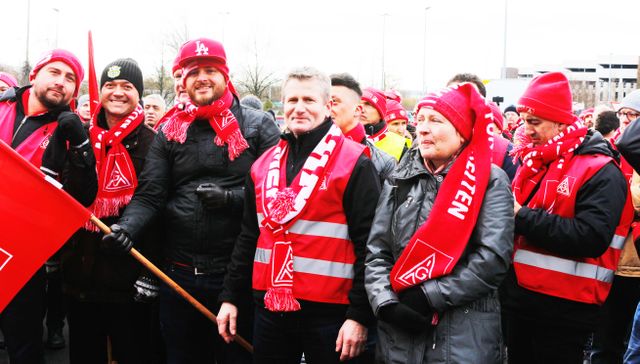 Luigi, a worker at the Mercedes plant in Sindelfingen, said that workers want to go on strike but are not interested in the union’s empty protests. “Workers know that IG Metall does not strike for six percent more wages and a 28-hour week. A filthy compromise has already been worked out. That’s just a fraud.”

The ordinary workers who participated in the pickets and rallies expressed skepticism towards the unions and hostility to the Grand Coalition.

At the rally at the Bosch headquarters in Stuttgart-Feuerbach, Peter, who started as an apprentice at the plant forty years ago, said, “I have seen many such negotiations.” He said that IG Metall should be more aggressive, but he does not believe it will happen in the light of past experience. “The role of the unions is ultimately to bring peace to factories and safeguard production.”

Peter called the plans for a renewed Grand Coalition a disgrace. Even the last government restricted the entry of refugees, he said. Now they want to shut down the borders completely, while at the same time providing new reasons for the flight of millions from their homes. “You can see on TV the pictures of the bombed cities. And Germany continues to provide weapons throughout the world and cause further destruction.” 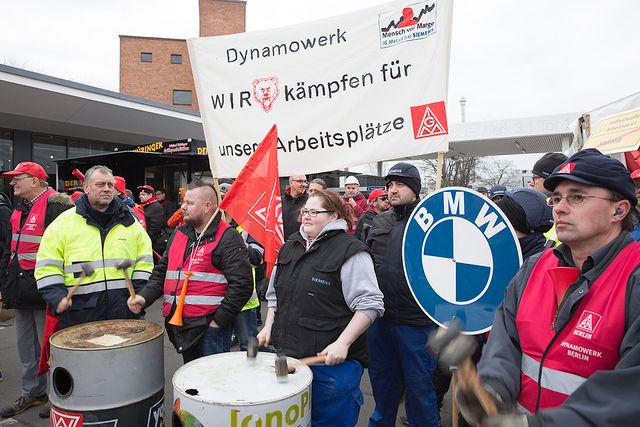 On the picket line at the BMW plant in Berlin, a young permanent worker declared his solidarity with the many temporary workers who, thanks to the unions, receive much lower wages and are not affected by the current wage demands. “I think that the union’s demands related to temporary workers are not sufficiently considered. We have so many contract workers here at BMW, whose jobs are uncertain. They are hardly represented here at the rally.”

Asked about the coalition government, he said: “The SPD is no longer a workers’ party. It has nothing to do with us anymore. Because the IG Metall leadership is organized in its majority in the SPD as well, one cannot expect it to expand the strike.” The international perspective of the Sozialistische Gleichheitspartei (SGP, Socialist Equality Party) impressed him. “It is only logical that we must confront international corporations as an international workforce.”

Axel, who works in the BMW plant in Leipzig, spoke at length about the growing workload. “They are demanding more and more, less and less people should be able to do more and more.” At the same time, he said, his salary is far from sufficient to support his family, and that’s why his wife also has to work.

He also attacked the reactionary policies of the Grand Coalition. “We have seen in recent years that it has become bitter for quite a few people. Every fifth child in Germany is affected by poverty. Twenty or 25 percent of German employees are in the low-wage sector.”

Axel said he sees a direct connection between the conditions of workers and the drive to war. “The German arms industry makes huge sums of money and thus drives the international war development.” Axel said the problems of the world could be solved through the expropriation of the wealth of individuals like Amazon founder Jeff Bezos (net worth 84 billion euros). “Then we can leave it with the war.”

Workers also spoke out against war and militarism at the large Ford plant in Cologne. “The wars as in Syria, the militarism in Germany, the arms exports of the German armaments industry. I’m watching this with concern,” said Yussuf.

He said he is also suspicious of the unions, due to their close connection with the SPD. “IG Metall says it supports the parties that support the workers. I do not think so.” IG Metall supports a new Grand Coalition, he said, but these parties do not support the workers. “The CDU [Christian Democratic Union] not at all and the SPD not for many years. That’s why they got a dressing-down in the last general election, and that will not be the last time,” he said.

An older worker expressed his distrust of the unions and denounced their negotiations with the employers. “This is all just show. The result is already established,” he said.

“This is just what is lost, what our fathers and grandfathers have built. The distribution of wealth and income is absolutely unfair,” he said. He complained that “with wages of 1200 euros, that is what temporary workers are earning, you cannot plan a future.” He pinned all his hopes on the younger workers. “The youth must take action against the austerity measures as a whole.”