Thousands of teachers across West Virginia staged one-day strikes or protests on Friday to demand a decent pay increase and protection of their benefits. Teachers from the historic coal mining battlegrounds of Logan, Mingo and Wyoming counties defied state law and carried out one-day strikes.

Approximately 2,000 educators converged on the state capitol, filling the rotunda as the state Senate considered a proposed paltry one percent pay increase. The striking teachers, who were bussed up from the southern part of the state, were joined by bus drivers, custodial workers, cafeteria workers, other public employees, as well as by other educators from across the state. 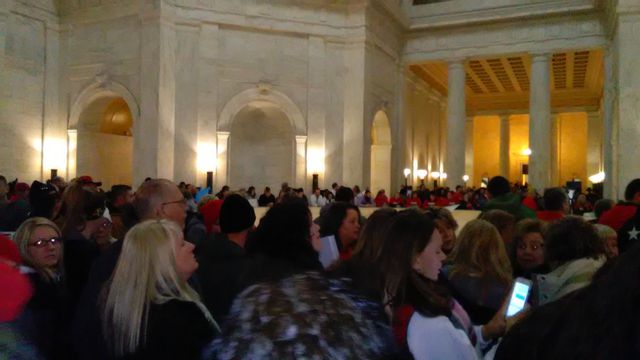 The derisory pay package, Senate Bill 267, passed 33-0, as protestors looked on. Teachers in the state have not had a pay increase since 2014 and are presently ranked 48th out of 50 US states in average salary. Moreover, the pay “increase” is actually a pay cut, as it is accompanied with demands for increased deductibles and copays to health insurance as well as attacks on seniority. The Senate bill will now go to the House of Delegates.

Districts in Kanawha, Boone, Monongalia and Berkeley counties organized “walk-ins” and rallied with students and parents prior to the start of school in defense of teachers’ rights. Similar actions and continued protests are scheduled throughout the weekend and next week. Strike votes in additional counties are expected soon.

Many students also rallied to show their support for educators. At South Charleston High School, about 30 students started the day in the parking lot in front of their school holding signs in support of their teachers. At Martin Middle School in Cabell County, teachers, parents and students held a protest, all wearing purple, and lining the roads, demonstrating their support for pay increases for educators.

The American Federation of Teachers West Virginia (AFT-WV) and the West Virginia Education Association (WVEA) have been meeting with Republican Governor Jim Justice, who promoted the bill, for the last two weeks. The unions did not take responsibility for the illegal strikes, telling the media that the striking teachers were acting independently.

In fact, the determination of protesting teachers was palpable. “We’re here because we are the coalfields. We’ve been taught since we were little not to put up with this kind of treatment, and we won’t anymore,” Angie Butcher, a special education teacher at Verndunville Elementary told the Charleston Gazette-Mail.

Referring to additional strike votes, she said, “Since it’s moving region to region, I think they’re going to pay attention at different times. If legislators don’t listen, this will be a statewide movement. In a lot of ways, it already is.” 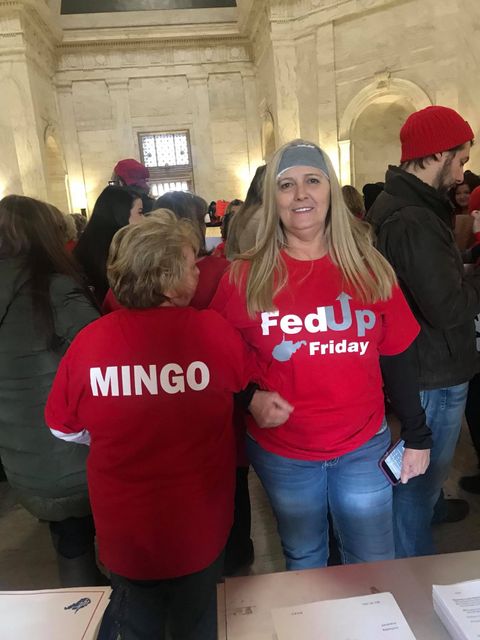 Teachers line the rotunda of the capitol in Charleston, WV [Credit: Gregory Bailey]

“Our kids are too important not to fund public education,” Kanawha County teacher Yvonne Martin told MetroNews. “Vouchers and savings accounts? West Virginia wake-up! That’s just another way to take funding away from public education.” Martin has been a teacher for 39 years.

Physical Education teacher Greg Garber said, “For years they’ve promised benefits in lieu of raises and they promised us sick leave days in exchange for insurance – they’ve taken that away. They have increased our deductibles and co-pays every year,” Garber said. “Now they have bills that do away with seniority,” the MetroNews also reported.

Tiffany Sargent, a Logan County third-grade teacher, told the Gazette -Mail, “We’re pushing for our rights, because it has been so bad for teachers for so long, and they expect us to do more with less. We have been doing that, but they keep taking more and more.”

The proposed increases in the Public Employees Insurance Agency (PEIA) premiums and deductibles will not just affect teachers, but all state employees. Public hearings on the PEIA measures are scheduled in Morgantown, Charleston and Beckley over the next two weeks. Adding insult to injury, PEIA has imposed a $25 per month penalty on public employees in 2015 should they fail to meet “healthy lifestyle” goals.

Erin Robinson, Franklin Elementary Reading Specialist, told WTAP TV, “our health insurance is slowly eroding every year to the point where we can’t afford to go to the doctor.”

In the wake of the vote, Sen. Robert Karnes, R-Upshur, lamented, “It's as much as we can do.” “We'd like to do more, but it's all we have,” stated Sen. Mike Azinger, R-Wood, adding, somewhat more explicitly, “Raising taxes on industry is not the thing we’d like to do…”

The attacks on educators in fact merely escalate the ongoing transfer of wealth from workers in the state to the coal bosses and other big business interests. Both Democratic and Republican state legislators have for years pushed through massive tax cuts on the extraction industry and other major corporations. They dramatically cut the Corporate Net Income Tax and eliminated the Business Franchise Tax entirely.

The same legislators are now pushing for a phase-out of industrial personal property tax. This new gift to big business in the state would translate to another $150 million in budget cuts to public services or substantial increases in local personal taxes, according to the West Virginia Center on Budget and Policy.

Senate Minority Leader Roman Prezioso lamely tried to distance himself from the deeply unpopular attacks on public education. “We have felt compelled to work with the governor over the past two years,” he explained. On Thursday, in last minute posturing designed to preserve some credibility, the Democrats had proposed an amendment to increase teacher pay by the “reasonable” level of three percent for one year, followed by the same one percent per year as the Republican measures.

Prezioso admitted to the Gazette-Mail that his proposal for such a paltry increase would likely not “appease people,” indicating the fears of the state’s big businesses of the escalating opposition by teachers. Prezioso added, “People are angry. I haven’t seen this kind of anger since 1990.” In any event, the Democrats’ pro forma amendment predictably failed along a party line vote. The only previous teachers’ strike in West Virginia history was an 11-day walkout in 1990.

For their part AFT-West Virginia president Christine Campbell and WVEA president Dale Lee described the passage of the bill as encouraging. “I think it had to pass at one percent,” said Campbell.

Brittany Bauer, an AP biology and AP environment teacher at Wyoming East High School, like many educators, raised the need for further strike action, invoking 1990. “Then, it was just teachers, and today it’s more than that—all public employees are rallying too, because of PEIA,” she explained to the Gazette-Mail.

Asked about the state threats to carry out mass firings or arrests, she replied, “It’s got to the point that it’s worth giving up everything,” Bauer stated, “If they aren’t going to listen to us, we may have to,” making clear the rising tide of anger throughout West Virginia.

The region has long been associated with powerful struggles of the working class and violent state repression. The Mine Wars of the 1920s and 1930s gave rise to the term "Bloody Mingo," referring to the state's southern county. Neighboring Logan County was the scene of the Battle of Blair Mountain in 1921 when some 10,000 miners fought for unionization in pitched battles with police, strikebreakers and the US Army.

Such experiences and militant traditions live on in social consciousness despite decades of betrayals by the United Mine Workers of America and other unions. The teachers strike is the harbinger of a new period of mass struggle.