This is the second part of a three-part article. The first part was posted on March 7.

There are 57 candidates for the Democratic nomination in 44 congressional districts who boast as their major credential their years of service in intelligence, in the wars in Iraq and Afghanistan, at the State Department, or some combination of all three. They make up the largest single occupational group running in the Democratic primaries that began March 6 in Texas and extend through mid-September, selecting the candidates who will appear on the general election ballot on November 6.

Aside from their sheer number, and the fact that more than 40 percent, 24 of the 57, are women, there are other aspects worth considering.

Agents, but no longer secret

First: The number of candidates who openly proclaim their role in the CIA or military intelligence. In years past, such activities would be considered confidential, if not scandalous for a figure seeking public office. Not only would the candidates want to disguise their connections to the spy apparatus, the CIA itself would insist on it, particularly for those who worked in operations rather than analysis, since exposure, even long after leaving the agency, could be portrayed as compromising “sources and methods.”

This is no longer the case. The 2018 candidates drawn from this shadow world of espionage, drone murders and other forms of assassination positively glory in their records. And the CIA and Pentagon have clearly placed no obstacles in the way.

We’ve already reviewed the cases of Elissa Slotkin, running in Michigan’s 8th District, who served three tours with the CIA in Baghdad, and Gina Ortiz Jones, an Air Force intelligence officer in Iraq, running for the Democratic nomination in the 23rd District of Texas. There are many others.

Abigail Spanberger, seeking the Democratic nomination in a district in the suburbs of Richmond, Virginia, has the following declaration at the top of her campaign website: “After nearly a decade serving in the CIA, I’m running for Congress in Virginia’s 7th District to fight for opportunity, equality and security for all Americans. My previous service as a law enforcement officer, a CIA officer, and a community volunteer has taught me the value of listening.” Indeed! 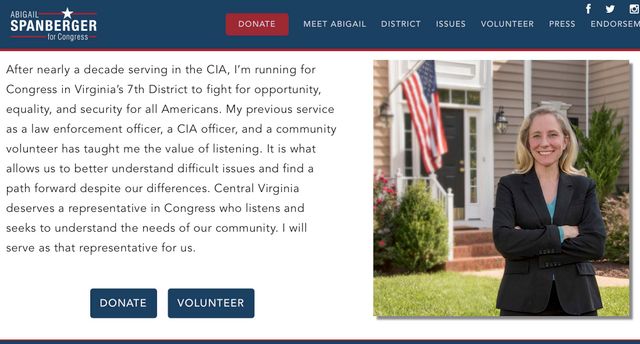 Spanberger worked for the CIA as an operations officer, in which capacity, “She traveled and lived abroad collecting intelligence, managing assets, and overseeing high-profile programs in service to the United States.” Her opponent for the Democratic nomination is a career Marine Corps pilot, Dan Ward, in one of nearly a dozen contests involving multiple military-intelligence candidates.

Jesse Colvin, running in the 1st District of Maryland, spent six years in Army intelligence, including four combat deployments to Afghanistan and a year near the Demilitarized Zone between North Korea and South Korea. According to his campaign biography, “I am a proud graduate of the US Army’s Ranger Course, the premier leadership school in the military. I am even more honored to have served in the 75th Ranger Regiment—the Army Rangers. Rangers lead in many key roles throughout the Special Operations Forces’ (SOF) community, and I am lucky to have served and led with men and women of this caliber.”

His biography continues: “As a Ranger, my four combat deployments in Afghanistan took place within a Joint Special Operations Task Force. I led intelligence teams whose work facilitated capture/kill missions of Taliban, al-Qaeda and other terrorist leaders. I managed a lethal drone program. I ran human intelligence sources. Every day, my team and I made dozens of decisions whose outcomes carried life and death consequences for my fellow Rangers, our Afghan partners, and Afghan civilians.” 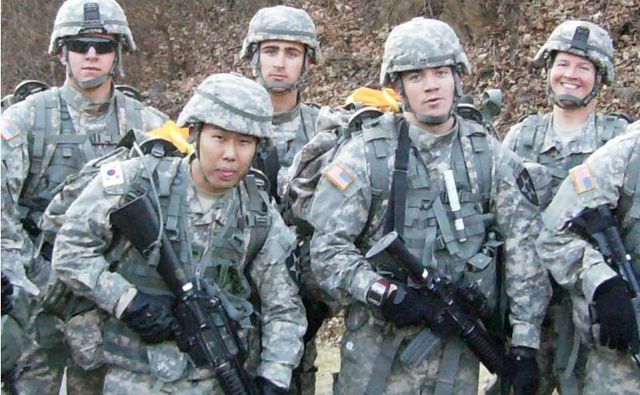 Jesse Colvin (front right) with his unit in Afghanistan

Jeffrey Beals, seeking the Democratic nomination in the 19th District of New York, is now a school teacher, but writes on his website, “After beginning my career as a CIA intelligence officer, I joined the State Department … I answered the call to help our country in Iraq in 2004 and became one of the longest serving US diplomats of the Iraq War. Fluent in Arabic, I faced down insurgents to set up the first diplomatic talks between our ambassador, our generals and the insurgency. I helped bring warring factions together to create a constitution for Iraq and was decorated by both the US Army and the State Department.”

Unfortunately for Beals, his fundraising, $174,000 by December 31, 2017, is dwarfed by that of another military-intelligence rival for the nomination, Patrick Ryan, a West Point graduate with two tours of duty in Iraq, “including a tour as the lead intelligence officer for an infantry battalion of 1,000 soldiers and officers responsible for ground operations in Mosul,” according to his campaign website. Ryan had raised $906,000 by December 31, and two other candidates in that district, a politically connected lawyer and a medical device manufacturer, had raised more than one million dollars each, all seeking to challenge two-term Republican incumbent John Faso in the Hudson Valley district.

Jonathan Ebel, running in the 13th District of Illinois, served four years as a naval intelligence officer, including on the staff of the US European Command in Stuttgart, Germany during the invasion of Iraq in 2003. He now teaches religion at the University of Illinois, Urbana-Champaign.

Then there is Shelly Chauncey, seeking the Democratic nomination in the 5th District of Pennsylvania, in the Philadelphia suburbs. Her website strikes a feminist note:

The reference to undercover operations “throughout the United States” underscores the role of the intelligence apparatus in spying on the American people, although the CIA is, by law, prohibited from such activity.

Another campaign website touches on the domestic operations of the US spy machine. Omar Siddiqui, running in California’s 48th District, describes his background as follows: “On the front lines of national defense, Mr. Siddiqui serves as a private advisor and consultant to the Federal Bureau of Investigation (FBI) on issues of national security and counter-terrorism and was formerly an advisor and community partner with the Central Intelligence Agency (CIA). Mr. Siddiqui is presently director of special projects of the FBI National Citizens Academy Alumni Association…”

Commanders and planners of the Iraq War

Barack Obama won the Democratic presidential nomination and the 2008 election in large measure by presenting himself as an opponent of the war in Iraq launched under George W. Bush. Once in office, however, he retained Bush’s defense secretary, former CIA Director Robert Gates, and continued the war for another three years, as well as escalating the long-running US war in Afghanistan.

It is noteworthy in this context that so many of the military-intelligence candidates for Democratic congressional nominations boast of their roles in the war in Iraq and even, in some cases, present it as the high point of their professional and even personal lives.

Thus Elissa Slotkin, already referred to above, met her future husband, the pilot of an Apache helicopter gunship, while working as a CIA agent in Baghdad. Dan McCready, a Marine Corps veteran turned “clean energy” multi-millionaire, backed by the Democratic Congressional Campaign Committee for the Democratic nomination in the 9th District of North Carolina, even claims to have found Jesus in Iraq, where he was baptized in water from the Euphrates River.

The Iraq War veterans are either officers, giving them command responsibility in one of the great crimes of the 21st century, or served in special forces units like the Army Rangers and the Navy SEALs, engaging in covert operations that were among the bloodiest and most brutal of the war, or had high-level responsibility at the Pentagon or the National Security Council.

Daniel Helmer, running in Virginia’s 10th Congressional District against five other well-financed candidates—including former State Department official Alison Friedman, who has already topped the $1 million mark—says remarkably little about what he did in Afghanistan and Iraq, although his photograph in military fatigues is on the front page of his website. But Helmer boasts perhaps the most extensive list of endorsements by retired national security officials of any candidate in the country, including eight generals and admirals, two former deputy directors of the CIA, Avril Haines and David Cohen, and Michele Flournoy, former under secretary of defense for policy. What he did to earn their support is left to the imagination.

Richard Ojeda, elected as a West Virginia state senator in 2016, is now seeking the Democratic nomination in the 3rd Congressional District, covering the southern third of the state. As the WSWS has reported, Ojeda has based his political career on more than two decades in the US Army Airborne, including repeated tours in Iraq and Afghanistan, where he reached the rank of major. His last post was as executive director of Army recruiting in Beckley, seeking to convince youth in West Virginia and Virginia to become cannon fodder for the Pentagon.

Josh Butner, running in the 50th District of California against Republican Duncan Hunter, Jr., “served for 23 years in the United States Navy where he saw multiple combat deployments, most recently in Iraq and Afghanistan.” The career Navy SEAL says almost nothing about what he actually did in the top military assassination unit, but that is to be expected. His campaign website features the slogan “Service, Country, Leadership,” alongside a photograph of Butner in desert fatigues.

Dan Feehan is running to succeed incumbent Democrat Tim Walz in the 1st Congressional District of Minnesota, after Walz announced his candidacy for governor of that state. From 2005 to 2009, according to his campaign biography, Feehan “served as an active duty soldier and completed two combat tours of duty as part of Operation Iraqi Freedom.” He then joined the Obama administration, first as a White House aide, then as an acting assistant secretary of defense in the Pentagon.

Andy Kim, running in the 3rd District of New Jersey, has actually raised more money than the incumbent Republican, Tom MacArthur. Kim worked at the Pentagon and as a strategic adviser to generals David Petraeus and John Allen while they were in command of US forces in Afghanistan. He then moved to the National Security Council, where he was Obama’s director for Iraq for two years.

Maura Sullivan, seeking the Democratic nomination in New Hampshire’s 2nd District, where incumbent Democrat Carol Shea-Porter is retiring, was a Marine Corps officer, rising to the rank of captain and deploying to Fallujah, Iraq, scene of some of the bloodiest battles and most horrific US war crimes of that war. She too joined the Obama administration as a civilian administrator at both the Department of Veterans Affairs and the Pentagon.

Jason Crow is running in Colorado’s 6th Congressional District against incumbent Republican Mike Coffman, where he was selected by the DCCC as one of its top candidates in the “Red-to-Blue” program. He is a veteran of the 82nd Airborne Division, leading a paratrooper platoon during the invasion of Iraq. He then joined the Army Rangers and served two tours in Afghanistan “as part of the Joint Special Operations Task Force,” where he rose to the rank of captain.

Matthew Morgan had a 20-year career in the Marine Corps “where I would deploy routinely overseas, culminating in several senior staff roles where I’d provide counsel to numerous military leaders, including the secretary of defense.” He did two tours in Iraq and also worked in counterterrorism on the Horn of Africa. Now he is the unopposed candidate for the Democratic nomination in Michigan’s 1st Congressional District, which has switched back and forth between the two big business parties and is currently held by first-term Republican Jack Bergman.