On Wednesday, Republican Governor Jim Justice, West Virginia Democrats and Republicans, the unions, and the corporate media all celebrated shutting down the nine-day strike of 33,000 school workers that sparked a wave of opposition among teachers across the country and won international support.

The unions forced the teachers back to work Wednesday after presenting the deal as a fait accompli without even letting them vote. The result was substantially the same as the deal teachers rejected last Tuesday: a five percent wage increase with no guarantee on the strike’s main demand, funding the Public Employees Insurance Agency. Adding insult to injury, Republican legislators have announced that the raise would be paid for with cuts to social programs upon which West Virginia workers rely. 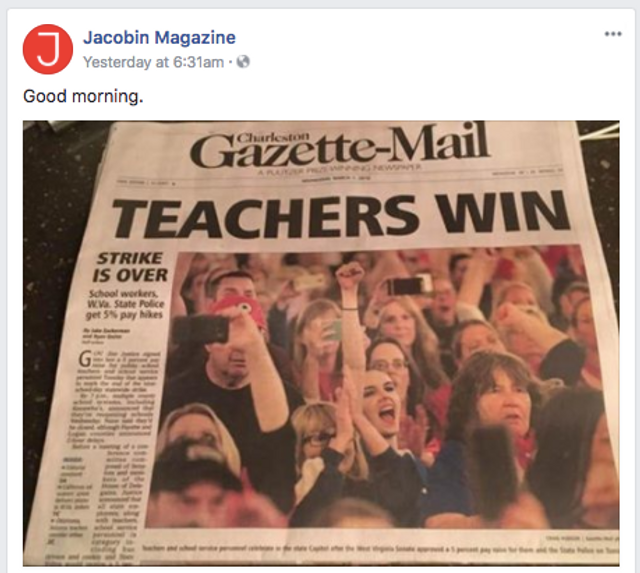 The Charleston Gazette-Mail declaring a victory for the teachers

It is critical for workers to understand and consciously assimilate the lessons of the strike, including the role of the trade unions and the Democratic Party in containing opposition and preventing it from developing into a broader political mobilization of the entire working class.

Both the ISO and Jacobin (edited by DSA national committee member Bhaskar Sunkara) joined the political establishment in praising the deal announced this week as a victory. On its Facebook page, Jacobin posted a cover of the chief publication of the West Virginia bourgeoisie, the Charleston Gazette-Mail, which announced, “Teachers win.” Jacobin ran an article praising the deal titled “What the teachers won.”

The International Socialist Organization posted on Facebook that “the West Virginia teachers won their strike.” On Wednesday, they published an article titled “The teachers united couldn’t be defeated.” Their efforts to present the unions’ sellout as a victory are aimed at quelling discontent and saving face for the unions and the Democrats who, working with Republicans, orchestrated the deal. This is consistent with their role from the beginning of the strike.

Jacobin and the ISO first ignored the West Virginia teachers altogether for weeks. Although the teachers in several counties first held a one-day strike on February 2, and walkouts spread the following week, neither Jacobin nor the ISO’s Socialist Worker paid any attention. These walkouts were organized and initiated by teachers themselves, not by the 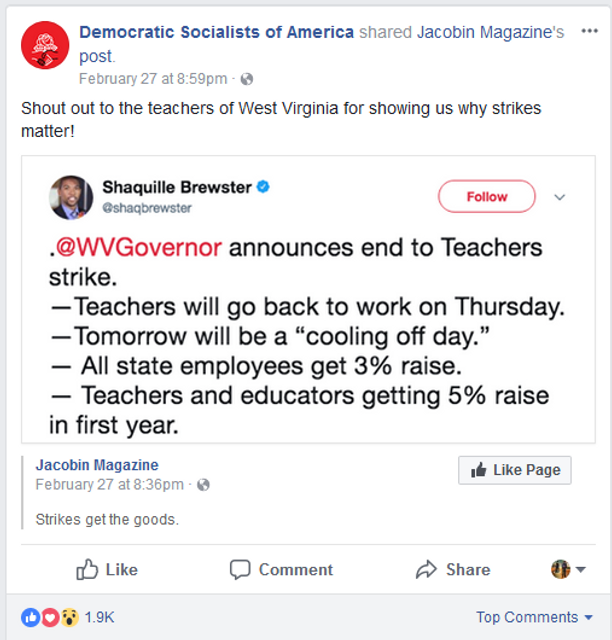 As the movement for a broader struggle spread, the unions called a limited two-day statewide strike on February 22-23 with the aim of letting off steam as they carried out discussions with Justice and state Democrats.

At this point, the pseudo-left scrambled into action. On February 22, the ISO wrote its first article on the teachers’ struggle. Jacobin did not comment until February 27, the day that the unions announced their first agreement with Justice to end the strike (which was rejected by teachers). (By contrast, the WSWS wrote 18 articles on the West Virginia teachers’ fight between February 1 and 26.) The pseudo-left realized they had a rebellion on their hands and that the trade unions needed “left” cover to shut down the strike.

In its February 27 article, the ISO credited union leaders for leading massive demonstrations the week before. The ISO claimed it was the union leadership’s decision “to continue the walkouts” and praised the fact that “union leaders are bargaining for a 5 percent increase over the next five years, amounting to almost $10,000 in raises.” The ISO lied by asserting the union wants “a permanent funding source for all PEIA-related concerns,” a claim that was exposed that day when the unions proposed a deal to end the strike that included nothing of the sort.

Jacobin’s first article, “Saving West Virginia,” also on February 27, noted with shock the extent of the teachers’ rebellion and concluded by praising “some Democratic politicians representing an emerging left-populist current within the electorate.” Jacobin urged workers to turn their frustration into votes for Democratic candidates: “It remains to be seen whether the teachers’ and public employees’ struggle, as a grassroots movement, will sustain itself beyond the strike to take political power in 2018 and beyond.”

When the unions announced a deal on the evening of February 27, it encountered immediate opposition from teachers. Jacobin and the ISO, however, rushed to proclaim victory. Jacobin and the DSA posted on Facebook that “strikes get the goods,” sharing a picture praising Governor Justice’s initial back-to-work order and empty promise for a five percent wage increase for teachers, a three percent increase for state employees, and a “cooling off day.”

Jacobin and the ISO responded to this rebellion against the unions by working to rebuild their authority. On March 3, Jacobin wrote that the “strike is actively making the teachers unions more democratic.” Incredibly, it tried to claim that the lack of PEIA funding in the union-backed deal was “not necessarily a bad thing” because “there is an election between now and 2019… If the deal passes the Senate, it will be up to the rank and file to organize for November and ensure that the 2019 legislature is more receptive to working-class demands.”

In other words—vote for the Democratic Party.

The ISO advanced a parallel argument in its March 5 article, “Inside the West Virginia teachers’ rebellion,” doing its part to repair the battered authority of the Democrats and unions. The ISO explained that “union officials and some Democratic Party politicians have played important—albeit contradictory—roles” in the strike. Both Jacobin and the ISO lavished praise on Democratic state senator Richard Ojeda, whose pro-war, anti-immigrant, pro-Trump bona fides the WSWS detailed here.

In reality, there is nothing contradictory about the role played by the West Virginia Democrats or teachers unions, which have sought to bring the strike to an end since its initiation. The Democrats, who have controlled the state for much of the past four decades with the support of the unions, are to blame for underfunding PEIA and keeping teachers’ wages among the lowest in the country. But according to the ISO, “the relationship between union officials and the rank-and-file is strained but far from broken. Most teachers continue to believe that the union officials are on their side.” 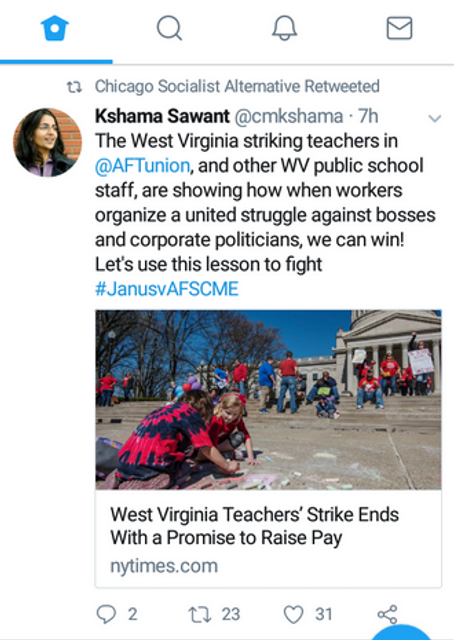 Having sought to channel opposition into the trade unions and the Democratic Party, the ISO and Jacobin were then called into action by the March 5 announcement of a deal. Neither organization raised any opposition to the fact that teachers had no opportunity to see the contract—let alone vote on it—before it was rammed through the legislature and signed by the governor. Jacobin tried to sell the deal by citing a Jacobin correspondent and union organizer who said, “I’m excited, I’m thrilled, I feel like my life won’t ever be the same again…and what a lot of people have already forgotten is how much we have already won.”

This comment is revealing—while the union is thrilled, the teachers are discontented—they have “already forgotten” that their betrayal is really a “victory.” The Jacobin article alludes to opposition among teachers. Jacobin’s Eric Blanc says, “Confusion arose” about whether paltry raises would be tied to social spending cuts. One of those interviewed cites “rumors” about this, but Blanc tells teachers and impoverished workers not to worry—“the bill itself is not tied to any such cuts.” An interviewee adds, “That will happen after we go back to school.”

As for the lack of any protection for PEIA, a union bureaucrat tells Jacobin that “people are still very skeptical,” encouraging teachers to calm down because the task force workers rejected the first time “is required to meet by March 15” and “there are going to be literally thousands of eyes watching everything they do.”

The ISO also tried to sell the deal, writing in Socialist Worker on March 7 that the deal was a “resounding victory on wages,” despite the fact that the one-time, five percent wage increase will be gobbled up by increases to healthcare costs. The ISO said the strike’s success stemmed from the fact that it forced the billionaire Governor Justice (the richest man in the state) to “realize which side he needed to be on.” The ISO urged teachers “to unite with other workers to stop the politicians from slashing budgets for social programs”—the very programs that will be slashed as a result of what they claim is a “resounding victory”!

The role played by the ISO and Jacobin over the course of the strike shows the class character of these organizations. The teachers’ rebellion shows that the working class is increasingly coming into conflict with the official institutions, including the Democratic Party, the trade unions, and the state. But at precisely this moment, the ISO and Jacobin come to the unions’ and Democratic Party’s defense, portraying them as heroes of a “victory” when in fact they betrayed the strike.

These organizations have nothing to do with the struggles of the working class. They were taken by surprise at the resolve of teachers, and only when the strike got out of control did they descend on West Virginia to sound the death knell and explain to teachers why they should go back to work. They praised two sellout deals and encouraged workers to transform their anger into votes for Democratic candidates in 2018.

The ISO and Jacobin have nothing to do with socialism or even with left-wing politics. They are fighting to defend the status quo and to advance the interests of a privileged section of the wealthiest 10 percent of American society, which sees the trade unions as a necessary bulwark against the growth of social opposition.