On Wednesday, March 21, thousands of teachers are expected to converge at the Kentucky state capitol to fight Republican Governor Matt Bevin’s proposals for drastic cuts to pension benefits, and to demand affordable health care.

With overwhelming support for the protests, at least five Kentucky school districts in the eastern region of the state announced they will close in Pike, Lawrence, Martin and Carter counties, with Ashland Independent schools in Boyd County also joining them. Reacting to the outpouring of support to the protest, superintendents in those counties have deemed Wednesday as a day selected “for staff members in our region to have a voice in Frankfort on educational issues.”

There are informal reports that the teachers may conduct their own strike vote at the Capitol. At school protest Monday morning in Louisville, teachers’ signs included the newly popular warning: “Bevin, don’t make us go WV on you!” in a reference to the nine-day strike by West Virginia teachers and school employees earlier this month. 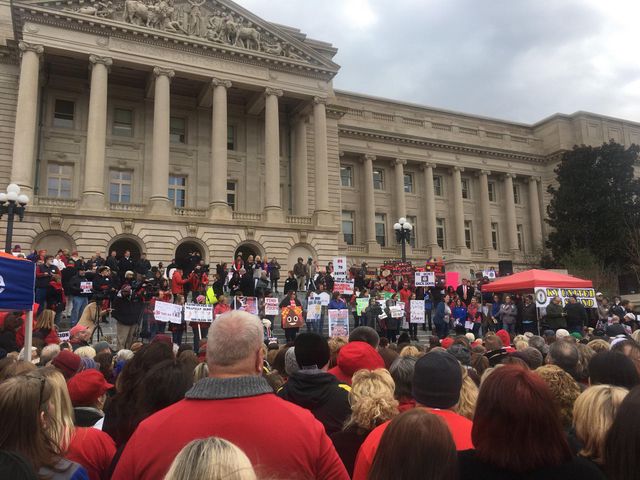 Kentucky teachers and public sector workers protest at the Capitol

“All of Pike County are going up Wednesday to protest. They haven’t called it a strike yet, but so many are going. I understand they will take a strike vote at 5 p.m.,” Kentucky resident BarbiAnn Maynard told the World Socialist Web Site. Maynard has been active in fighting for clean water in nearby Martin County.

“Kentucky has been closely following West Virginia,” she continued. “We know there is power in numbers. When you fight hard enough, long enough and loud enough, it’s power. The bravery of West Virginia teachers gave encouragement to Kentucky teachers. It’s long overdue. They are robbing the little man to pay for the big man’s mistake. This is failing the teachers and the children.”

Similar to the southern counties that sparked the West Virginia teacher walkout, eastern Kentucky is coal and natural gas country, with a long history of militant struggles and brutal repression. Pike County was the scene of the 15-month-long A.T. Massey strike of 1984-1985 in which hundreds of miners were arrested and the district virtually militarized.

For weeks, thousands of Kentucky teachers have rallied at the state Capitol, with many districts carrying out “walk-in” protests in front of their schools over education funding. Governor Bevin and state legislators have backed Senate Bill 1, a measure that would cut teacher retirees’ 1.5 percent annual cost-of-living raise to 1 percent for the next 12 years, resulting in more than an average $62,000 in lost income over a lifetime. It would also increase future health care contributions and end defined-benefit plans for future teachers. These drastic cuts follow years of de-funding public education and a sharp growth of inequality between districts. Teachers in the state are not eligible for Social Security benefits and are entirely dependent upon pension benefits.

According to the Lexington Herald-Leader, teachers hired in after July 1 of this year will be required to work 35 years and be at least 60 years old before they can collect enhanced pension benefits that presently can be collected after 30 years at age 55. The budget also proposes to transfer $481 million out of the state employee health insurance program to help balance the budget, threatening increases in employee contribution up to 50 percent by 2020.

In the face of this, the statewide teachers’ union, the Kentucky Education Association, has acquiesced to the attacks on public education and educators’ income for decades, while blocking any strike action. Brent McKim, president of the Jefferson County Teachers Association, denied the union was considering a strike. He told the Louisville Courier Journal teachers were finding success “using the democratic process that’s available to them.” Strikes by public employees are banned in the state, and the last walkout, over low salaries, was in 1970 and lasted five days.

Teachers and public-sector workers have seen little “success” as a result of the political horse-trading in Frankfort. Kentucky has the worst-funded state pension plan of all 50 states, according to USA Today, with a $41 billion pension fund deficit.

Fueling teachers’ anger were Bevin’s comments on Wednesday, March 14, when he lambasted educators for daring to oppose his plan, calling them “ignorant” and “selfish,” and “a group of people that are throwing a temper tantrum.” He compared them to ration protesters during World War II, saying, “This would be like…people having mass demonstrations about how: ‘No, I want my butter. I want my sugar. I’m going to keep all my steel and my rubber and my copper, and to heck with the rest of you people, but you better keep giving me mine. …’”

Retired Kentucky teacher Barbara Kussow Barr told the World Socialist Web Site, “I believe there’s a big movement to privatize education, and this is smoke-and-mirrors to make that happen. Public education has been a target. In Kentucky, we’ve been feeling a lot of pressure to privatize and have more charter schools and vouchers.” In June 2017, HB520, the bill enabling the establishment of charter schools in Kentucky, went into effect.

Barbara continued, “Privatization, low pay and lack of benefits and pensions go along with it. It’s an economic model. When you eliminate pensions, you eliminate people interested in teaching. It will eliminate professionals.” Emphasizing the relationship between the attack on pensions and the drive to privatize education, she said, “It’s all about building the stock market and not about people.”

Teachers are deeply angered by the years of budget cuts enacted by Republicans and Democrats alike. Per-pupil spending by the state was cut by 14 percent between 2008 and 2016, affecting every aspect of schooling. As of 2017, 54 percent of school districts have shortened the school year to save money, according to the Kentucky Center for Economic Policy (KCEP). Thirty-five percent of school districts have been forced to cut art and music programs, and 42 percent ended after-school and summer support programs. Teachers in Kentucky’s poorer districts have lost 5.7 percent in real wages since the Great Recession started a decade ago. Higher education funding is down by $78 million, 39 percent lower than it was in 2008.

The governor’s 2018 budget, currently under consideration by the legislature, deepens all of these cuts. It proposes to shift school transportation costs onto local districts, enacting a $138 million, or 62 percent, cut in state support. Bevin also calls for the complete elimination of state funding for the Kentucky Teacher Internship Program, previously $2.8 million; textbooks ($5 million); Teacher Professional Development ($3.1 million); the Early Childhood Development Scholarship Program ($2.9 million); the Kentucky Coal County Completion Program ($5.4 million); and the Teacher Scholarship Program ($2.1 million) and dozens of other education-related programs.

The governor’s budget would also eliminate teacher retiree health care for those under 65, requiring those retired teachers to pay out of pocket for their health care until they can apply for Medicare. While making existential cuts to education spending, the governor’s budget diverts $120 million in new appropriations to the Department of Corrections.

The struggles of Kentucky teachers, like those around the country, have elicited wide support from students and other workers. Social media has indicated the enormous opposition building up among Kentuckians. One commenter said, “What Bevin fails to say during this is that the teachers and educators across KY are not eligible for social security benefits at age 62 or later. … This governor is not a governor. He is a dictator.” Another asked rhetorically, why the governor isn’t taking “a 40% cut in his pay?...and also pay for his health insurance...like all of us...?” A third remarked: “You guys are not getting their attention. … Shut down the whole state’s school system then they’ll take notice...go on STRIKE !!!”

Trisha Knopp Scott, a parent, publicly commented on Facebook in support of the teachers, “…I have said for years that teachers are greatly underpaid. Having to fight for what they were promised and what they are entitled to is simply wrong. Calling them ‘selfish’ is inexcusable, Governor Bevins. Calling their peaceful walk-ins a ‘temper tantrum’ is laughable. Continuing to make comments such as those could possibly induce something much greater than a temper tantrum.”

Teachers in both West Virginia and Kentucky have also noted the fact that the billionaire coal boss governor of West Virginia, Jim Justice—responsible for the rotten deal forced on striking teachers, which fails to fix public sector workers’ health care benefits—owes $2.9 million in delinquent property taxes in Kentucky. His family-owned Kentucky Fuel Corporation owes $1.92 million in real estate, mining equipment and coal reserve taxes. Other operations in Floyd, Pike, Magoffin and Harlan County also owe hundreds of thousands of dollars. Most of these unpaid taxes would have been allocated for schools.