According to the Ministry of Heavy Industries and Public Enterprises, these enterprises, known as CPSEs or CPSUs (Central Public-Sector Enterprises or Undertakings), numbered 331 in 2017. They span most sectors of the economy, including railways, shipping, telecommunications, arms manufacturing, mining, banking, petrochemicals, airlines, and electricity generation and transmission.

In India, where working conditions as a rule are brutal and wages extremely low, CPSE jobs have traditionally been coveted as a source of relatively secure employment and better than average wages and working conditions. In a jobs competition that ended last month, more than 25 million people applied for 90,000 jobs, ranging from engine driver and carpenter to track inspector, on India’s state-run railways.

India’s ruling elite has been pursuing disinvestment for over a quarter-century, as part of its push to make India a cheap-labor haven for international capital. But the Narendra Modi-led BJP government has gone much further than its predecessors, including by targeting for privatization highly-profitable companies in what have previously been considered strategic sectors of the economy.

In this it has two long-term goals. One is to entirely eliminate CPSEs, so as to enable rapacious private investors and companies to gorge on enterprises that, although never run by or in the interests of the working class, are the product of the collective labour of generations of workers. The second is to progressively dismantle whatever social protections the CPSE provide against low-wages, mass-sackings and deleterious working conditions so as to further undermine the social position of the working class as a whole and thereby make India even more attractive to investors.

There is also a pressing short-term need for the government to raise revenue, in order to appease the international bond rating agencies, which have been pressing for India to lower its deficit to GDP ratio even while investing large sums in troubled state-owned banks.

The working conditions in CPSEs have been under concerted assault over the past two decades. Coal India Ltd. (CIL), from which the government has already sold off 20 percent ownership, is a case in point. It has announced that it plans to slash its workforce by 30 percent by 2020. This despite the fact that at least half of the 500,000 miners in CIL’s employ are contract workers whose wages, at a mere Rs. 8,500 (US $130) per month, are half those paid regular workers.

All sections of the political elite—including the Congress Party, which for the first four decades after independence championed state-led capitalist development—agree on the goal of wholesale CPSE privatization, claiming this will make India’s economy more “efficient.” By this they mean that it will unshackle management to squeeze greater profits from their workforces though an all-out assault on jobs, wages, benefits and working conditions.

When last in office (2004-14), the Congress Party implemented sweeping neo-liberal reforms, including privatization, but made a show of opposing the selling off of state-owned arm-manufacturers and the so-called “navratnas,” a handful of profitable CPSEs in strategic sectors like oil production and refining that it argued had the potential to be world-leaders.

Congress now has effectively dropped this stance, just it as has accommodated itself to Modi’s induction of India into an all but publicly proclaimed US-led anti-China alliance along with Japan and Australia.

The Stalinist Communist Party of India (Marxist) and the smaller Communist Party of India (CPI) oppose privatization, but only from the standpoint of nationalism and an alternative strategy for the Indian bourgeoisie. They argue that retaining state-owned banks and other enterprises will strengthen Indian capitalism vis-a-vis imperialist finance capital and give the India ruling elite greater room to maneuver on the world stage.

In his February 1 “2018-19 Budget Speech”, Finance Minister Arun Jaitley proudly highlighted the fact that in the 2017-18 financial year, which ended March 31, government disinvestment receipts would exceed Rs.1 trillion (US $15.6 billion).

This was a considerable increase from the goal of Rs. 720 billion ($11.3 billion) he had set during last year’s budget speech.

Cumulatively, disinvestment receipts under the BJP government, which came to power in May 2014, amount to more than Rs. 2,3 trillion or more than $36 billion. And for the current financial year, Jaitley has set a disinvestment goal of Rs. 800 billion ($12.3 billion.)

The scale of the government’s privatization drive emerges when the cumulative disinvestment receipts of more than $36 billion are contrasted, as in the pie chart, below with the government’s 2017 valuation of its stake in all 331 CPS at Rs. 12,5 trillion or $195 billion. 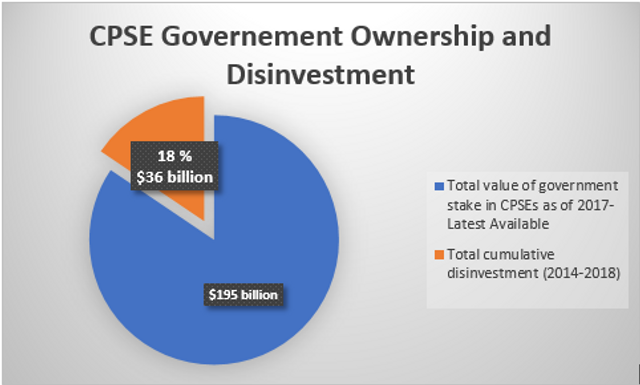 In addition to reducing the budget deficit, the Modi government has used the disinvestment windfall to sharply increase military spending to almost $55 billion per year.

One of the major enterprises now in the Modi government’s crosshairs for privatization is Air India, the national carrier. Over the past fifteen years, successive governments, including those headed by the Congress Party, have essentially driven Air India into bankruptcy by starving it of funds while forcing it to order in 2005, 111 new planes at the cost of Rs. 700 billion or close to $16 billion at the then prevailing exchange rate.

For years Air India has been forced to borrow funds even for its day-to-day operations, resulting in a debt-load exceeding Rs. 500 billion (about $8 billion). According to an article on the corporate media website FirstPost, the airline sustains daily loss of Rs. 100 million ($1.5 million), while its daily interest obligation on its loans amounts to Rs. 165 million ($2.5 million).

Prior to auctioning off Air India later this year, the Modi government plans to transfer the company’s full debt burden onto the books of the Indian treasury thus effectively gifting private investors a vast fleet of aircraft debt-free. There is no doubt that the jobs, wages and working conditions of Air India’s 27,000 employees are under major threat.

The unions have responded with a half-hearted protest campaign. Other than verbal denunciations of the Modi government, the Centre of Indian Trade Unions (CITU), the trade union affiliate of the Stalinist Communist Party of India (Marxist), has done nothing to oppose the Modi government’s plans to privatize Air India.

India’s public sector banks are also under the scanner for privatization. The government and corporate media have exploited recent scandals concerning politically-connected Indian billionaires and multi-millionaires getting additional credit even while not meeting payments on their existing debts to argue that the state-owned banks need to be put in “surer,” private hands.

In fact if India’s backs are riddled with “non-performing assets,” i.e., loans in default, it is because BJP and Congress-led governments have pressed them to keep lending to India’s business houses to prop up a flagging economy. Now the BJP government intends to “socialize” these debts, making India’s workers and toilers pay through increased taxes and social-spending cuts for the cash infusions needed to strengthen the banks’ balance sheets and prepare them to be sold off to big business.

The rapacious big business interests animating the Modi government’s privatization drive are exemplified by its appointment of Reliance Mutual Exchange Traded Fund, an investment fund owned by the billionaire Anil Ambani, to serve as the “consultant” and “expert” overseeing the quick, partial or complete privatization of ten giant and highly profitable CPSEs, including Oil and Natural Gas Ltd. (ONGC), Gas Authority of India Ltd.(GAIL), Oil India Ltd., Indian Oil Corporation (IOC), Coal India Limited, and Bharat Electronics Limited. Anil Ambani’s brother, Mukesh Ambani, is the richest person in Asia. The Ambani brothers were early enthusiasts for a government led by the Hindu “strongman” Modi, which they saw as an instrument for the Indian ruling elite to more aggressively pursue intensified exploitation of the working class and its predatory great-power ambitions on the world stage.