Fifteen days after the Ecuadoran Embassy in London cut WikiLeaks founder Julian Assange’s Internet access, details of the real motives behind President Lenin Moreno’s antidemocratic decision are beginning to emerge. Moreno and his Alianza PAIS party—representatives of Latin America’s wave of “left” bourgeois governments known as the “pink tide”—are proving to US imperialism that they are willing to trade Assange’s freedom in exchange for closer ties to Wall Street and the US military.

On April 5, Bloomberg quoted Aristodimis Iliopoulos of the imperialist think tank Economist Intelligence Unit: “The back story is that Ecuador wants to grow again by getting back into the good graces of international investors in oil and mining projects. So the wager might be that clamping down on Assange is seen as a sign of good will.”

This exposes Ecuador’s justification for cutting Assange’s Internet access—that he broke an agreement not to interfere with Ecuadoran politics—as a flat-out lie. It is bound up with the country’s efforts to please the Trump administration and Wall Street, which owns a growing portion of Ecuador’s economy and extracts massive interest payments each month. Wall Street is using its clout to impose the American political establishment’s demands to silence Assange or turn him over to US authorities.

On April 3, less than a week after cutting Assange’s Internet, Moreno announced a sweeping austerity plan to slash social spending and facilitate payments to the country’s Wall Street creditors. Citing the deal approvingly, the ratings agency Fitch cited “a 42 percent rise in interest expense” and a “sharply rising debt burden” that “reached 46 percent of GDP in 2017, up from 29.6 percent in 2014.”

On April 4, Spain’s El Pais wrote that Moreno “wants to implement austerity in his new economic program” which “the Moreno government reached through an agreement with analysts and the private sector.”

Fitch noted that “if implemented well,” Moreno’s austerity plan means “there is potential for the reforms to result in fiscal adjustment over the long term,” i.e., more favorable conditions for American and European corporations to exploit the country’s resources and cheap labor.

On March 26, eight days before announcing the austerity plan and two days before cutting Assange’s Internet, the Moreno government met with two leading representatives of US Southern Command, the section of the Pentagon responsible for the military’s activity in Latin America. Before the meeting, the US Embassy stated Lt. Gen. Joseph DiSalvo and Ambassador Liliana Ayalde met with “defense authorities and civil authorities” to “reiterate Southern Command’s commitment to boost and strengthen the friendship between the two countries.” 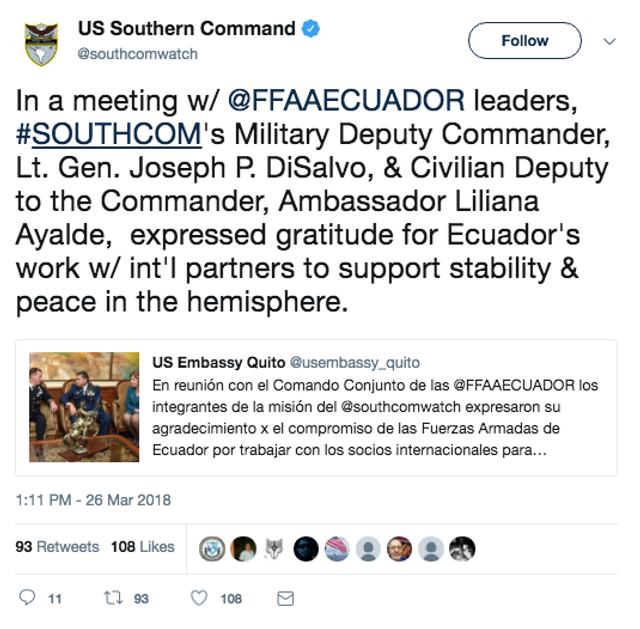 After the meeting, Southern Command’s official twitter account read, “In a meeting w/ [the Ecuadoran Armed Forces] Lt. Gen. Joseph DiSalvo & Civilian Deputy to the Commander, Ambassador Liliana Ayalde, expressed gratitude for Ecuador’s work w/ int’l partners to support stability and peace in the hemisphere.” In the weeks before Ecuador’s meeting with the US military, Moreno has publicly humiliated himself in his efforts to secure credit lines and military support from Wall Street and the Trump administration.

In an interview with Le Monde Diplomatique conducted March 1 and published in the paper’s April edition, Moreno shrugged off criticisms of the Trump administration’s ruthless attack on immigrants and said, “We are not against American citizens, nor American businesses, nor the American government which, even though we may not think the same, we must respect because the American people elected it.”

In the same interview, Moreno expressed his hostility to Assange, stating, “We did not create the Assange issue, we inherited it” from Moreno’s predecessor Rafael Correa. Moreno then attacked Assange for making statements critical of Ecuador’s far-right wing opposition parties: “I am not in agreement with what Mr. Assange is doing. We have continued to insist that he not intervene in international politics, nor Ecuadoran politics, including about the opposition… I told him no, don’t mess with that, he doesn’t have the right, that his condition does not permit that.”

The Ecuadoran government cut Assange’s Internet in the aftermath of a March 26 tweet in which Assange criticized Germany’s decision to arrest Catalan ex-President Carlos Puigdemont. Ecuador claimed Assange’s tweets threatened the “good relations that the country maintains with the United Kingdom, with the rest of the European Union and with other nations.” But the interview with Le Monde Diplomatique took place three weeks before Assange tweeted against Puigdemont’s arrest, proving that the Ecuadoran government has been looking for a pretext to cut Assange off or to kick him out the Embassy altogether and into the hands of US authorities.

Under the Trump administration, the United States has warmed to Ecuador as part of its effort to diminish the influence of China in the region. In January, the Ecuadoran government allowed the American Federal Bureau of Investigation (FBI) to investigate a bombing in the city of San Lorenzo in a move that Moreno called “the help of a brother country.”

US Army War College Professor R. Evan Ellis wrote in 2017 that the US must work with the “pink tide” governments. The pink tide “is not inherently a phenomenon that the US can or should try to ‘defeat.’ The most viable strategy for the U.S., and in the long term, the best one for the region, is to guard against subversive projects by an anti-U.S., anti-democratic subset of the left, while working to ensure that all regimes, regardless of their ideology, succeed through good governance and strong democratic institutions…”

In other words, American imperialism recognizes the pro-capitalist, anti-working class character of the Latin American governments that comprise the pink tide and views them as a bulwark against the development of genuinely anti-imperialist movements of the working class.

Twenty years after the 1998 election of Venezuelan ex-President Hugo Chavez inaugurated the pink tide period, Moreno’s decision to cut Assange’s Internet proves that the building of a socialist movement in Latin America requires an appraisal of the right-wing, pro-capitalist character of the pink tide period. All the groups that constitute the international pseudo-left have lent support to these bourgeois governments and now bear responsibility for the urgent danger confronting Assange.