Thousands of Arizona teachers, parents and students are holding the first of three days of “walk-in” protests before school today in the lead-up to a scheduled statewide strike on Thursday. The planned walkout by nearly 60,000 educators in the southwestern US state is part of a rebellion of educators that is national and international in scope.

Last week, the Facebook group “Arizona Educators United,” announced that 78 percent of the 57,000 teachers polled had voted for strike action. Teachers are demanding a 20 percent pay raise, substantial wage improvements for support staff and the restoration of funding cuts, which have slashed $1 billion from the public schools over the last decade.

“The mood of the teachers is one of determination,” a teacher from Tucson told the World Socialist Web Site. “We feel the need to fight for the rights of our students and education as a whole. We believe in our students and their futures and know education needs to be able to provide for those futures. We are in buildings with leaky roofs, 25-year-old textbooks with duct tape and broken desks. We need to fight for our fellow workers: bus drivers, cafeteria workers, custodians and other support staff. 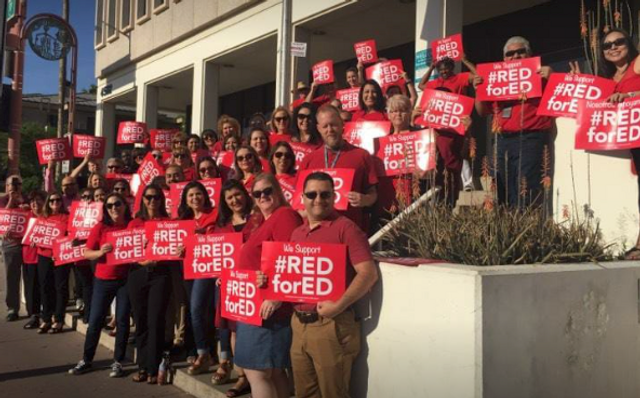 “Governor [Doug] Ducey has refused to meet with teachers and has presented a half-baked plan of taking desperately needed funding from hospitals, the arts, universities and the programs that help the developmentally disabled. This is not how we want our schools to be funded, by taking away from other social programs. Since the announcement of a statewide strike, teachers and parents are preparing for a battle that need not have casualties, such as those whose programs he wants to take from. This state deserves better and so do its citizens.

“We are being told we will have to make up the time we are on strike for our students. At this point, we are not sure if that is true or just a tactic to scare teachers. We are planning to walk out anyway. Some schools will have walk-ins until Thursday and then will walk out on Thursday. We support our fellow teachers in every state, and some hope that a nationwide strike is forthcoming. We need to fight for education before it is too late.”

As in West Virginia and Oklahoma, the struggle in Arizona has been initiated by rank-and-file teachers, not the unions, which have colluded with state and federal authorities in the systematic defunding of public education and the funneling of resources to charter schools and other for-profit educational schemes.

Teachers in Arizona have been holding “#RedForEd” protests, sickouts and demonstrations at schools, neighborhoods and at the state capitol in Phoenix for a month. The Facebook group, Arizona Educators United, however, has no independence from the Arizona Education Association and it is promoting the same fatal illusions that teachers’ demands can be won through lobbying and appealing to the governor and the state legislature.

But the experience of the West Virginia and Oklahoma teachers has proven the futility of such a perspective. “We were told to just go into the legislators’ office and tell our story, but they didn’t care,” Jane, a teacher in Oklahoma City, told the WSWS. “I was looking for hope, that the state government would fund education. But they said, ‘We’ve got prisons to fund.’ We said the better educated we are, the fewer kids will be in prison. But they are renting to own two to three new prisons, which are a business here in Oklahoma.

“We’re supposed to live in a democracy with checks and balances, where the government is supposed to rule by the consent of the people. But if you’re part of the ruling class, you don’t do what the people want but what the gas and oil companies want. The legislators are cutting the session short, so they can go out and fundraise for the elections.

“It was rank-and-file teachers that started this. We didn’t listen to the OEA [Oklahoma Education Association]. A lot of people were educated in this strike, including teachers, about state politics. We knew the bills better than the legislators did. But they weren’t listening, and now a state representative wants to push a referendum to veto our wage increases. While the governor promised us a pay raise, we are constantly reminded that it is not funded next year.”

Referring to the need to unite teachers across the country, Jane concluded, “I want this to go nationwide. If we all go together, and go to Washington, they can’t all run away.”

As Arizona teachers prepare to walk out, teachers in Kentucky, Colorado, Florida and many other states are pressing for statewide strike action. Teachers in Puebla, Colorado have voted to strike, rejecting a two percent pay proposal from the local school board, which is also proposing a four-day school week next year due to budget cuts.

Hundreds of Colorado teachers are planning to walk out and march on the state capitol Friday to demand higher pay and defend their pensions in the state run by Democrats. State Republicans have introduced a bill to authorize school districts to obtain injunctions against striking teachers, who would then face not only fines but up to six months in county jail if they defied a court order to return to work.

The National Education Association (NEA) and the American Federation of Teachers (AFT) betrayed the West Virginia and Oklahoma strikes, and are seeking to prevent walkouts from occurring in more than one state at a time, fearing that this could rapidly spread into a nationwide strike. Instead, the NEA and AFT are trying to limit the Arizona strike to one day and divert the anger of teachers behind a campaign to elect Democrats in the 2018 midterm elections.

However, the school crisis is the result of the deliberate policies of both big-business parties, which have been aided and abetted by the teacher unions. Over the last three decades, tax cuts for the corporations and the wealthy, implemented by Ducey, his Republican predecessor Jan Brewer, and former Democratic governor Janet Napolitano, have drained nearly $4 billion from the Arizona state budget.

The same is true on the national level. By the early 1990s, the Clintons had fully embraced the nostrums of “school choice,” which until then had chiefly been advocated by the most right-wing enemies of public education and free market advocates. This was accelerated under George Bush’s “No Child Left Behind,” co-authored by liberal stalwart Senator Edward Kennedy, which utilized high-stakes testing to scapegoat teachers for the educational problems caused by decades of budget cutting and the growth of poverty.

The NEA and AFT then promoted Obama as the champion of public education. While the Democratic president bailed out Wall Street and funneled limitless resources to fund war, he deliberately starved states and school districts of needed resources and used the resulting funding crisis to oversee the destruction of the jobs and living standards of hundreds of thousands of educators. Obama’s Race to the Top program gave cash-starved districts federal money to close “failing” schools and vastly expand charter schools.

During the two terms of the Democratic president, the AFT and NEA all but banned teachers strikes. When they did occur, as in Chicago in 2012, the unions quickly sold them out. With the Janus case now pending in the Supreme Court—which threatens to end “agency fees”—the unions are working double time to prove that they can suppress the resistance of teachers to a new wave of attacks on public education.

Led by wealthy business executives—AFT President Randi Weingarten (salary $490,000) and NEA President Lily Garcia (salary $348,000)—the unions want, as the AFT slogan says, “school reform with us, not without us.”

To take the struggle forward, teachers must sever all ties with unions by electing rank-and-file committees in every school and community to take the conduct of the struggle in their own hands. Instead of fruitless “lobbying” of corporate-controlled politicians, educators should dispatch delegations to the public and private sector work locations throughout the state to mobilize the broadest support for this struggle.

At the same time, these committees should establish lines of communication with educators and other workers across the US and internationally and prepare for a general strike to defend public education and other vital services.

The struggle to defend the right of all children to high-quality public education is, above all, a political fight. This necessitates the building of a powerful political movement of the working class, independent of corporate parties, to take political power and redistribute society’s wealth to fully fund public education, eradicate poverty and raise the cultural and material conditions of the population as a whole.