Tens of thousands protest in Berlin against far-right AfD

A rally by supporters of the neo-fascist Alternative for Germany (AfD) Sunday was met with mass demonstrations throughout Berlin by tens of thousands of people protesting the policies of xenophobia, racism and militarism that the party embodies.

The AfD chartered buses to bring demonstrators from across Germany and paid thousands of people to participate. Nevertheless, the fascist rally was dwarfed by counter-demonstrations which, according to organizers, involved as many as 70,000 participants.

Demonstrators said they were disgusted by a speech delivered by Alice Weidel, the AfD’s co-leader, who opened the German parliament’s legislative session with a fascistic tirade condemning Muslim migrants as “burqas, knife-men and other good-for-nothings.” Using all the tropes of Nazi demagogy, Weidel warned of the “downfall of our nation” resulting from the admission of people from “tribal” societies.

The mass protests against the AfD make clear that while the German political establishment tolerates and promotes fascists, the broad majority of workers and young people in Germany will not accept a return to the 1930s.

Notably, the demonstrations in Berlin took place over the same weekend that tens of thousands of protestors rallied in Paris against the austerity measures demanded by French President Emanuel Macron and as voters in Ireland overwhelmingly cast ballots to overturn the country’s ban on abortion. 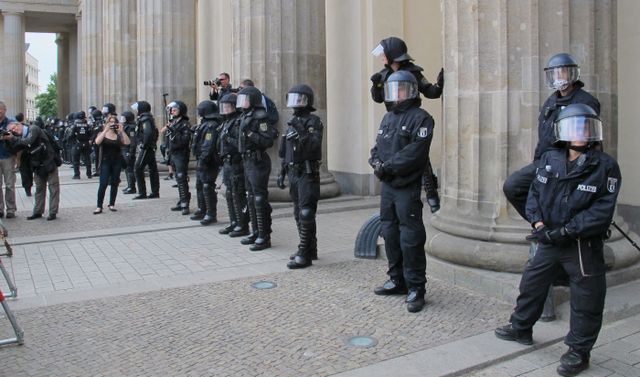 With the protection of heavily-armed police, the right-wing extremists marched from Berlin’s main train station to the Brandenburg Gate, where AfD leaders delivered fascistic tirades. Federal executive member Beatrix von Storch blustered about “the rule of Islam in Germany,” which was “nothing other than the rule of evil.” In his speech to the rally, AfD leader Alexander Gauland fumed, “We will teach them a lesson.” 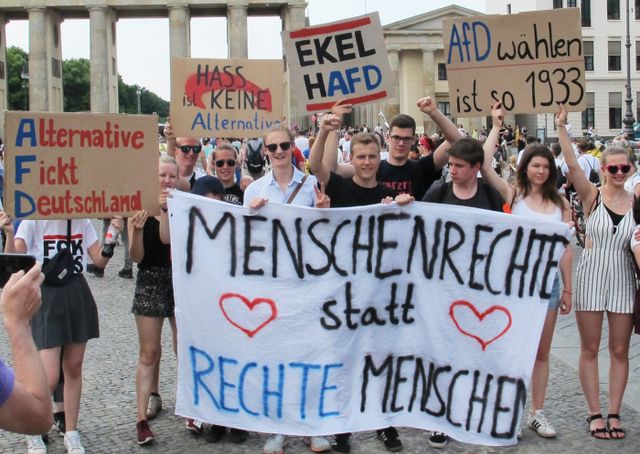 Participants in the anti-AfD demonstration

Many young people gathered at the Brandenburg Gate in the morning. A student standing near the Bundestag (federal parliament) and holding a handmade sign with the slogan “I am disgusted by Nazis” told the World Socialist Web Site that it was “horrifying” that the far-right was marching once again in Germany, of all places. “We’ve had this before. They killed millions of people in its name,” he said. 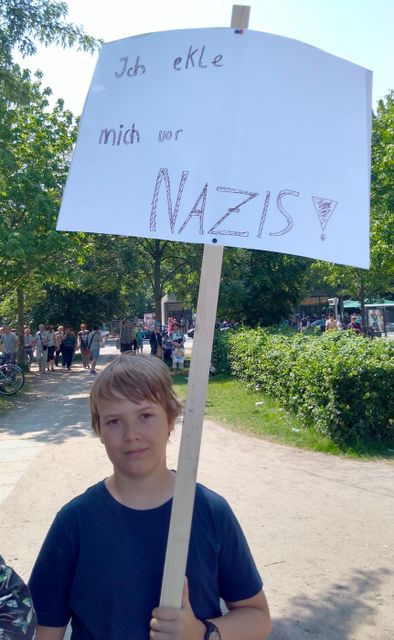 A student protests against the AfD

Sarah, 28, who is self-employed, took part in the anti-AfD demonstration because she felt it was necessary to fight against racism and xenophobia. Asked about the other parties in parliament, she said, “Nobody else is fighting the AfD.” This was not surprising, she continued, because the Christian Democrats were also agitating against refugees and had virtually adopted the AfD’s policies. “Today’s demonstrators show that the majority of the population is opposed to the AfD and the far-right,” Sarah added.

Oliver, a 24-year-old apprentice tradesman, came to the demonstration with friends, to protest not only against the AfD, but also against “the right-wing, racist policies” it stood for. He stated that it was “shameful” that this party was once again advocating racial hatred.

Many participants drew parallels to the 1930s and the Nazis and criticised the major parties for paving the way for the AfD with their right-wing, anti-social policies. The enormous gulf between the hostility towards the far-right among youth and workers and the hypocritical attempts of the established parties to pose as opponents of the AfD was plain for all to see. The vast majority of demonstrators simply ignored the official rally held in front of the Bundestag by the Social Democrats, the Left Party, the Greens and the trade unions.

Anti-AfD demonstrators gather in front of the Brandenburg Gate

Members of the Sozialistische Gleichheitspartei (Socialist Equality Party—SGP) and the International Youth and Students for Social Equality (IYSSE) explained in discussions with demonstrators that a struggle against the neo-fascists required a political reckoning with the establishment parties and a socialist programme.

“Under conditions of the deepest crisis of capitalism since the 1930s, wars all around the world and growing conflicts between the major powers, the extreme right is being deliberately bolstered by the ruling class in order to push through its policy of militarism, increasing state powers at home and abroad, and social austerity,” the SGP and IYSSE declared in a statement.

The statement went on to explain that the origins of leading AfD politicians demonstrated that the struggle against the far-right could not be based on the capitalist state and its political parties. Large sections of the AfD were recruited directly from the state apparatus—including the military, judiciary and police—or were formerly members of the other bourgeois parties. “The most important lesson of German history is that the fight against fascism and war is inseparable from the struggle against its cause, capitalism, and against all those parties that defend this bankrupt system,” the SGP statement insisted.

The SGP has played a leading role in the struggle against right-wing extremism in Europe. In 2014, the party initiated a campaign against the official promotion of the right-wing extremist professors Jorg Baberowski and Herfried Münkler. For this, it was condemned by the political establishment, which rushed to the defence of these ideologists of the extreme right.

Many demonstrators were aware of the connection between the rise of the fascistic right and the capitalist policies of war and austerity. Martin Morand, a physiotherapist, spoke out against the grand coalition’s planned increases in military spending. The money would better be invested in combatting “real poverty,” he said. “People are fleeing from war and violence and poor conditions in Africa,” he said. Instead of military rearmament, Martin called for "turning swords into ploughshares.”

Rene, who teaches German, brought his son to the rally. He was motivated to participate by AfD leader Alice Weidel’s fascistic tirade last week. Until a few years ago, he had thought that, after 1945, something like this “could never take place.” He said, “I am very saddened that this is just accepted. That’s why I said to my son: let’s go to the protest today and help.”

The AfD’s demagogy was the same as that used by Hitler and the Nazis, but the established parties were all “gradually” adopting the AfD’s positions, Rene declared.