The Socialist Equality Party held a powerful rally yesterday at Sydney’s Town Hall Square, demanding that the Australian government of Malcolm Turnbull take immediate action to secure Julian Assange’s freedom and return to Australia, with a guarantee that he will not be extradited to the United States.

Hundreds of workers and young people attended the event, under conditions of a media blackout of the protest and the growing dangers facing the WikiLeaks editor. Attendees travelled from as far away as Hobart, the Tasmanian capital—a trip of 1,500 kilometres. Contingents came from Victoria’s capital city, Melbourne, as well as Newcastle, a working-class regional centre of New South Wales, and other cities and towns. 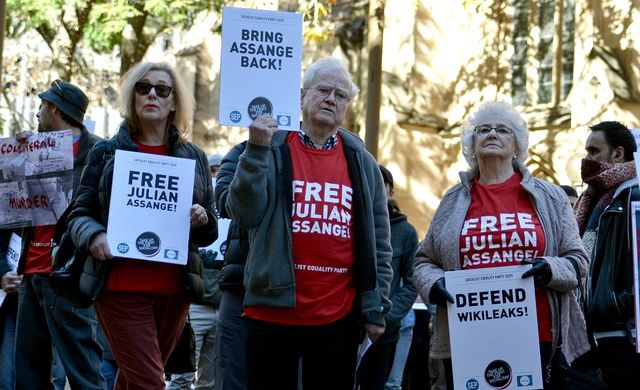 Assange supporters at the Sydney rally

Thousands more people watched a livestream Facebook video of the event. Speakers, including SEP national secretary James Cogan and investigative journalist John Pilger, indicted the Australian political and media establishment for its role in the attacks on Assange and WikiLeaks. So far, the video has been viewed more than 20,000 times.

Sam, a young IT worker, drove more than 200 kilometres from the city of Bathurst to take part in the demonstration. “I have been an online supporter of Assange in the past, sharing information through the Internet,” he said. “Especially in the last couple of years, witnessing the black PR and smear campaigns against Julian, I felt it was important to speak up for him and show my face. I wanted to be part of showing support for him. 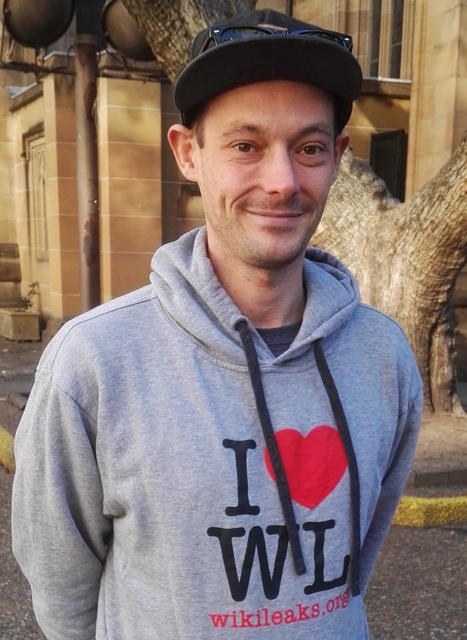 “I’ve been appalled at how governments have treated a fellow citizen. Assange has not been charged with any crimes, yet he has been chased around by governments, including our own, the British and the Swedish. It’s disheartening to see any Australian having their human rights ignored.

“Julian can’t even get daylight, get fresh air or see his family. All he has done is publish the truth. Ever since publishing the Afghan war logs, the Iraq war logs and the US diplomatic cables, there has been a secret grand jury and sealed indictment against him in the United States. They didn’t want these facts coming out because they want to carry on with their disgusting war games. All Julian has done is give information to the general populace, which is the role of journalism.

“Since the 2016 US election, there have been a lot of lies told, including about Russia. What is revealing is how much the media has been censoring truthful news and spreading propaganda from Hillary Clinton and others. Who can you trust? What is the truth? The lies are so rampant in all media, and across all platforms.

“I’ve been reading articles from the World Socialist Web Site, mainly in relation to Assange. They are great, comprehensive, honest and trustworthy news. The rally today was really important. We showed solidarity and support for Julian. It’s good to see that there are plenty of us starting to come together. That gives me courage and confidence.” Cynthia, originally from New Zealand, has worked in the media and at universities. “As a former journalist I wanted to support freedom for Julian Assange because he has committed no crime,” she said. “The Australian government should intervene as they did for Peter Greste, the Al Jazeera journalist whom they helped get out of Egyptian custody.

“There has been virtually nothing in the mainstream media about Assange and his situation. It has been ignored, but it should be something that is reported. We need to know about it. There are implications for democratic rights in Assange’s case, because you cannot have democracy if individual rights are not protected and especially the right to free speech. I think that the Australian government has to act to defend Assange.” 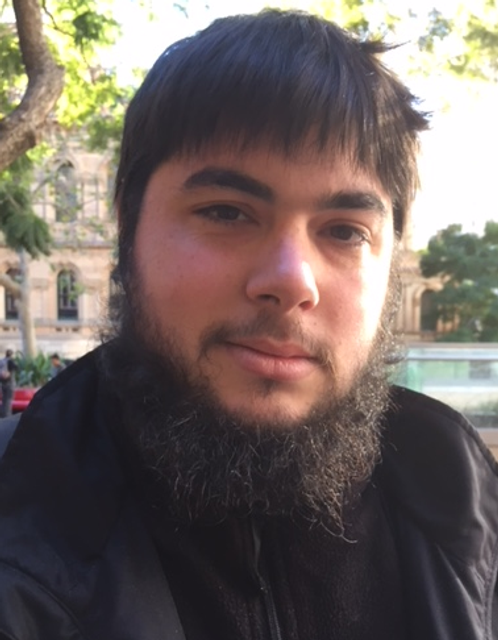 “Assange is a target of the US government because they want to send a message to anyone else who wants to expose the truth.”

James, a mature-age student at Western Sydney University, stated: “This rally reinforced how important the work of Assange is. Governments are not transparent, so we need heroes like Assange to continue this work and tell us the truth. It also hit home for me, that US imperialism is determining Assange’s situation. They either want him arrested or dead for revealing their secrets. 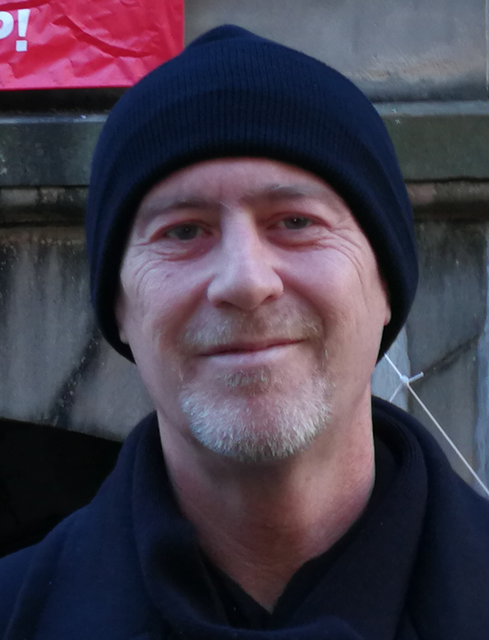 “In 2010–11, the Labor government of Julia Gillard abandoned Assange and claimed what he did was illegal. They didn’t want to strain the imperialist relationship with the US that has existed for over 70 years now. Australia relies on the US for its foreign policy, for defence, for basically everything. It’s all under the table deals and discussions.

“WikiLeaks revealed the criminality of US protected sources within the Labor Party who were acting as informants for the US embassy. It goes to show how pervasive US imperialism is, with hegemony all over the world. They don’t like that they are being challenged and are trying desperately to hold on to their past glories as economic and military leaders of the world.”

Joyce, a retired office worker, said: “I came here today because I am so angry about the state of the world. We really need to stops wars, wars, wars. The governments of the world don’t seem to care about war happening. I’m here to defend Julian Assange because it’s really bad to treat a good decent man like that and the governments are out to persecute him. It’s disgusting and I have no respect for the governments that are allowing this to happen.” 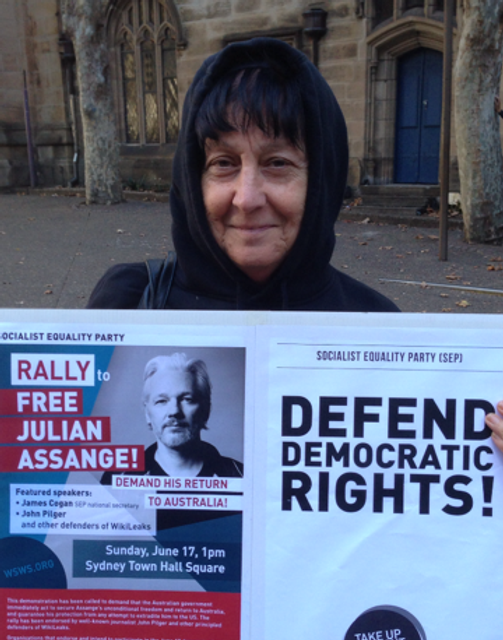 No government can be relied upon to free Julian Assange, she said. “The governments are very resistant. They are digging their heels in, and the only way we are going to win is if there is more protest and more people making their voices heard.”

Bogna said she came to the rally because “I’m worried about Julian Assange. He’s doing the whole world a favour by exposing the truth behind how the governments operate and oppress people and drive to unnecessary wars.

“I really believe humanity has learned from previous world wars about the need for freedom and peace for everyone, but it’s not happening. So Julian is exposing the governments and it’s just appalling the situation he is in. He should be freed.” 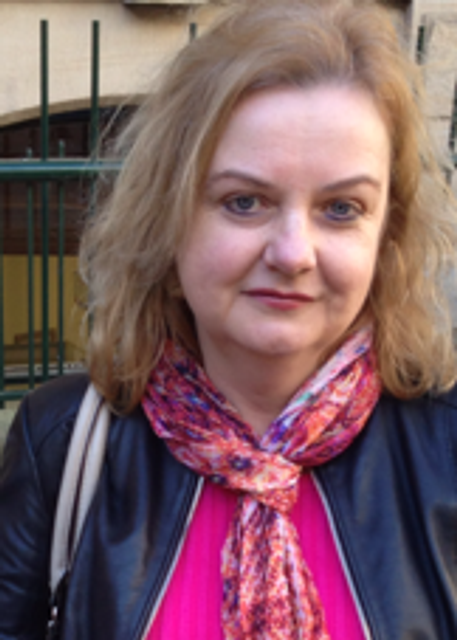 Bogna said governments were afraid of millions of people knowing the truth. “Governments have dirty motives and they don’t want them exposed,” she commented. “They are all just striving to retain power and the support of the lobbyists who only have monetary interests. They don’t want people to realise that.”

“It’s not just about Julian Assange but everyone’s freedom of expression. I know that your party, the Socialist Equality Party, also has problems with being able to exercise that freedom because of the efforts to censor the Internet.”