Around 200 people, including workers, youth and retirees, attended a vigil outside the Ecuadorian embassy in London Tuesday evening to demand the freedom of WikiLeaks editor Julian Assange.

Susan Manning, the mother of US whistle-blower Chelsea Manning, was in attendance, as were people from various countries including Greece, Chile, Portugal and India. A vocal contingent of Ecuadorians led the chanting with shouts of “Free Julian Assange!” at regular intervals. Participants held WSWS and Socialist Equality Party placards declaring “Free Julian Assange,” “Defend Free Speech” and “No to Internet Censorship.” The event was met with a blackout by the British and Western mainstream media.

The WSWS statement “The Sydney rally to defend Julian Assange: An important step forward” was distributed and read eagerly by many of the protestors. It reported the successful rally in Sydney on Sunday, organised by the Socialist Equality Party (SEP) (Australia), to demand that the Australian government intervene to protect Assange, an Australian citizen, and guarantee his right to return home and his freedom from being extradited to the US.

The Sydney protest and the London vigil are part of a deepening international campaign to free Assange, who has now been forced to remain in the Embassy for six years. Other demonstrations have been held from New Zealand and Australia, to Sri Lanka and India, across Europe and in many US cities, including Washington, D.C.

Among those speaking in defence of Assange were Craig Murray, the former UK ambassador to Uzbekistan, and Lauri Love, the young British citizen who was accused by the US government of hacking FBI and NASA computers and who fought his extradition from the UK. Love explained how his family and supporters waged a successful campaign against his extradition, which he finally won this year. 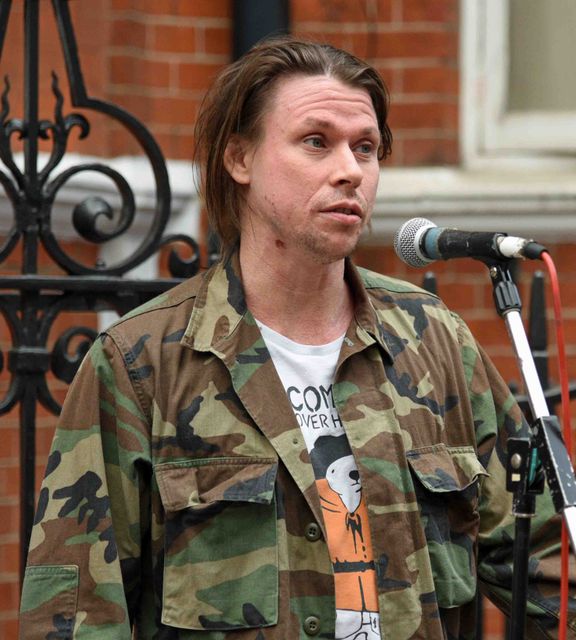 Julie Hyland, the assistant national secretary of the Socialist Equality Party (UK) spoke, receiving rounds of applause and the loudest cheers of the evening from the audience. The text of Hyland’s speech is published below.

On Thursday, there will be further reports including interviews with those attending the London vigil.

“On behalf of the World Socialist Web Site and the Socialist Equality Party, I want to extend our solidarity to Julian Assange and the demands for his freedom.

“The British government must be made to end its vindictive persecution of Julian and allow him to leave the Ecuadorian embassy and, if he chooses, leave the United Kingdom without fear of arrest or interference.

“Julian Assange is an innocent man. He is a political prisoner—the victim of a monstrous frame-up.

“It is more than one year since Sweden dropped its trumped-up allegations against him and more than three years since the United Nations condemned his detention as “arbitrary, unreasonable, unnecessary, disproportionate.” 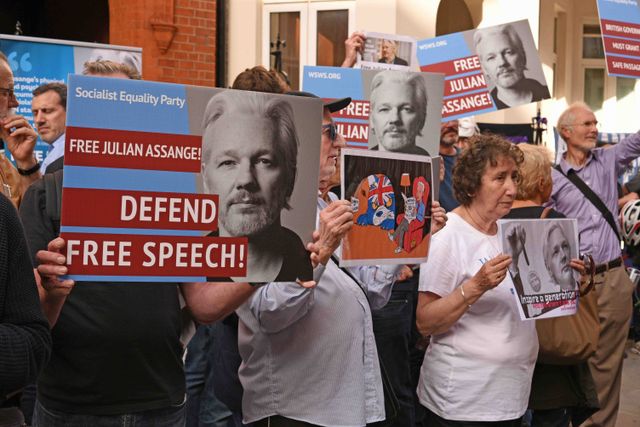 “Yet, after six years, he still cannot leave the Ecuadorian Embassy. Only in February, a British judge stated that he faces arrest for breaching bail conditions if he tries to leave the building.

“These were bail conditions imposed as a result of his justified efforts to resist his extradition to the US to face charges of espionage, which carries the death penalty. The British judge’s threat was made just one day after the US Justice Department confirmed that it is still seeking his extradition.

“Assange has more than paid for any such breach. Despite never having been charged with any offence, he has less rights than a convicted murderer. Confined for six years without access to sunlight, fresh air or exercise, his health has significantly deteriorated.

“For almost three months now, he has been denied contact with the outside world, save his lawyers. He cannot speak to his family, and is unable to receive visitors, make phone calls or access the Internet. 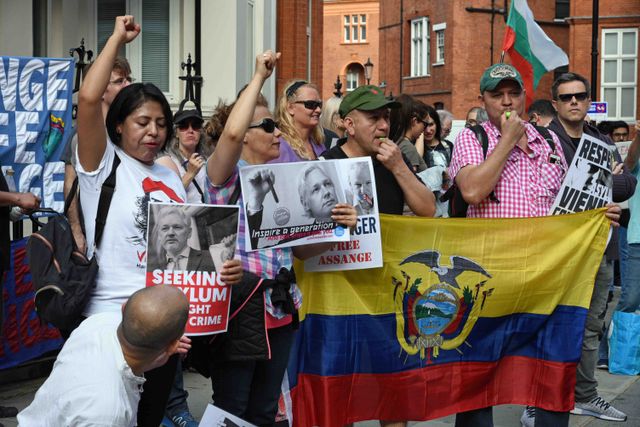 “There is the real and imminent danger that this is the prelude to his expulsion from the embassy.

“The cruel and inhuman treatment meted out against Assange stands in stark contrast to the kid-glove handling of the fascist dictator and mass murderer General Augusto Pinochet back in 1998. Pinochet’s extradition to Spain from London under an international arrest warrant was resisted for more than a year while he lived in luxury until the then Labour government Home Secretary Jack Straw cited “compassionate grounds” allowing him to return to Chile.

“Julian Assange is being punished because he is someone all too rare these days—a journalist who tells the truth and courageously exposes the crimes of governments, giant corporations and other powerful organisations.

“Crimes that include the indiscriminate murder of hundreds of civilians in Afghanistan and Iraq by the US and its allies following the illegal invasion of these countries.

“Conspiracies, such as CIA operations to hack into phones, PCs, servers, smart televisions and even vehicle computer systems, so that it can spy on the communications of tens of millions of people in the United States and around the world.

“It is for fearlessly reporting the realnews that he has been targeted by the US, subject to de facto detention by successive British governments and abandoned by the Australian authorities—the same three countries that have been in the forefront of regime change operations the world over in the last two decades. 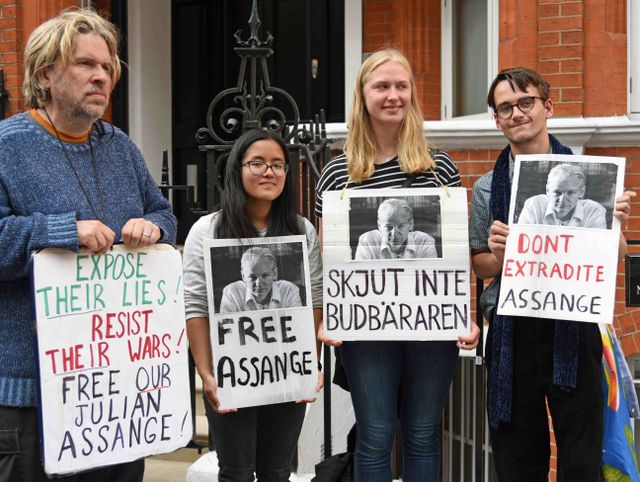 “It is no accident that his communications were cut off just before the US-led bombing of Syria, Israel’s mass shootings of Palestinians in Gaza and now the Saudi-led assault on Yemen, using weapons supplied by Britain.

“The attack on Julian Assange is at the centre of the assault on free speech and media censorship waged by governments across the world, in concert with corporations such as Google, Facebook and others.

“The powers-that-be are not only trying to cover up their past crimes but are preparing new and even worse ones.

“They know there is massive opposition to their war-mongering, which threatens a confrontation between nuclear powers.

“They know there is massive opposition to the years of austerity that have destroyed vital social provision and produced record levels of social inequality. 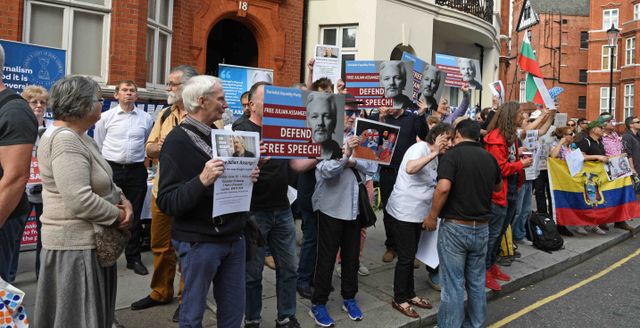 “This is behind their turn to state repression and censorship.

“All the more disgraceful then are the actions of the so-called ‘liberal’ media such as the Guardian and the New York Times that have played the lead role in smearing Assange. John Pilger has rightly described this as Vichy journalism, after the Vichy government that collaborated in the Nazi occupation of war-time France.

“Joining the Vichy journalists are the numerous ‘progressive,’ ‘left’ and ‘socialist’ organisations and individuals who are silent in the face of the campaign against Assange.

“It is shameful that Jeremy Corbyn has not made a single public statement in Julian’s defence since he was elected party leader in 2015, almost three years ago.

“There is no question that if he used his considerable support to pledge Labour’s defence of Assange and WikiLeaks, there would be thousands here today and those plotting against him would have to think twice.

“The next weeks are critical. We call on workers and youth in Britain and across the world to break this wall of silence by renewing the fight for Assange’s freedom as vital to the defence of free speech and a critical and independent media.”