On Saturday, as many as 2,000 people rallied on the campus of the University of Michigan in Ann Arbor as part of a nationwide day of protest against the recent ramping-up of the war on immigrants by the Trump administration.

The rally was one of hundreds organized nationally by MoveOn.org and various other satellite organizations of the Democratic Party under the banner “Families Belong Together” in response to growing popular outrage over the Trump administration’s horrific practice of separating child refugees from their parents when they are detained at the border. This past week also saw the release of plans by the US Navy for the construction of two enormous and “austere” concentration camps near major cities in California, and the Supreme Court ruling upholding Trump’s travel ban on seven countries targeted for domination by US imperialism. 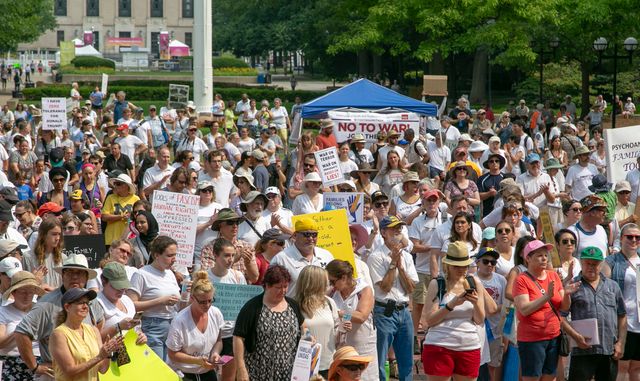 A section of the rally in Ann Arbor

The rally’s main speaker was Democratic Congresswoman Debbie Dingell, the Representative for Michigan’s 12th congressional district. She delivered a demagogic speech devoid of any political perspective (“We must never, ever, ever, ever give up!”, “I wanna scream from the rooftops!”, etc.). Dingell railed against the horrors meted out on immigrants by the Trump administration, while stressing the need to “keep our nation safe,” meaning the continuation of the detention and deportation of immigrant workers and further militarizing the border.

The Socialist Equality Party’s candidate for Michigan’s 12th congressional district, Niles Niemuth, is running against the incumbent Dingell in November. An advanced request for Niles to be given time address the rally from the platform was denied by the event’s organizers. 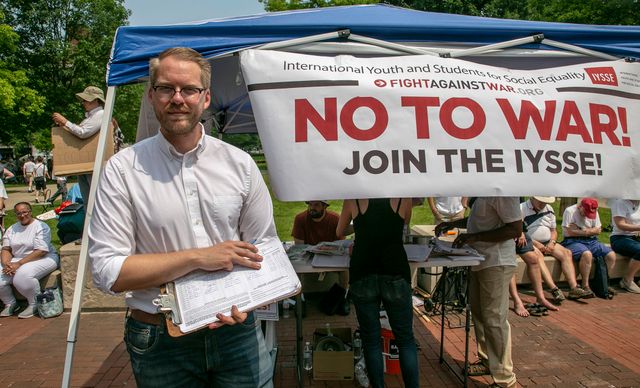 A campaign team of SEP and IYSSE members intervened in the rally, collecting over 500 signatures to put Niles on the ballot in November, raising hundreds of dollars in donations, and distributing hundreds of leaflets calling for the mobilization of the working class in defense of immigrants, open borders, the ending of deportations and the abolition of the American Gestapo—Immigration and Customs Enforcement (ICE) and Customs and Border Protection (CBP).

SEP campaigners sought to broaden the discussion from the particular crimes of Trump and explain the class issues involved and the role of the Democrats in the assault on immigrants; to draw the connections between efforts to whip up anti-immigrant sentiment and the issues of war and inequality; and to fight for the building of an independent socialist movement of the working class to defend the rights of all workers, immigrant and native-born. 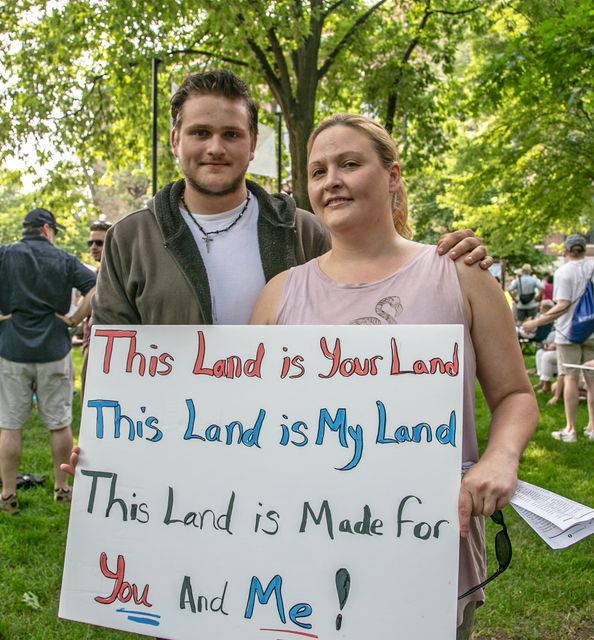 Mary and her son Kelly

Mary, a computer programmer, said she was horrified by reports of children being held in cages by ICE and noted that she saw immigration as a class issue. “If you were born to a wealthy family overseas, you’re welcomed into this country,” she said, “but just because you were born wealthy doesn’t mean you are more worthy to come here. And I think it’s crazy we’re trying to keep other people out just because of their heredity, basically.”

She pointed to the historical parallels for the current war on immigrants, saying, “It’s like the rise of nationalism before World War II. That kind of thing was happening all over the world at the same time. So it’s really scary.” Her son Kelly, a high school student, said, “It’s crazy that we’re dehumanizing people, pulling people away from their families. Let them live their own lives! They’re not hurting us.”

Tiffany, a government employee who works with many undocumented workers, came to the rally with her husband and son. “Seeing their fear of being deported is horrible. Just because I was born here shouldn’t mean I have any more rights than them. Everyone should have an equal opportunity.” 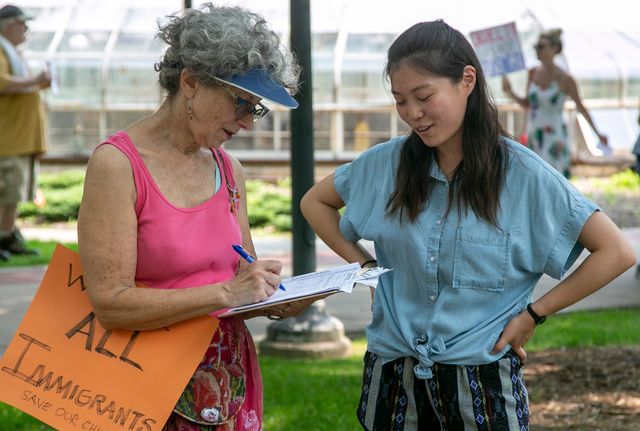 Tiffany said she was “not a Democrat or a Republican. I suppose I’m more of a moderate. The Democrats talk a big game but when you see their voting record, who funds their campaigns? I know who funded the Clinton campaign: big money, corporations and businesses who profit off of poverty and war. The Republican Party is open about it. The Democrats are smoke and mirrors.”

She continued: “Obama was the ‘Deporter in Chief.’ With the whole idea of what Trump calls ending ‘catch and release,’ it wasn’t actually that people were all being released before. People were actually still being tracked, deported and separated. Now it’s done in a more direct, explicit way.”

Tiffany said she was “not in the mindset that capitalism is good or solves anything. People all over the world are working very hard and don’t get anywhere. I want a political organization that acknowledges that capitalism is not working, and I don’t support the Democrats and Republicans.”

Manal, Nadine and Sabrine are university students in nearby Dearborn, Michigan. Nadine explained the slogan “Nobody is Illegal” on her poster: “Everyone has the same rights as everyone else. We are all human beings.” Manal added, “I don’t understand. We’re in the 21st century and human rights are put on the backburner for capitalism and money. Literally everything else is on the backburner: free education, health care, jobs. You’re supposed to come here for opportunities. It’s supposed to be the ‘land of the free and the home and the brave.’” 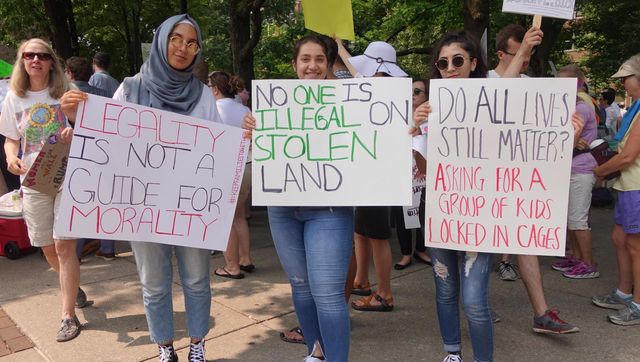 Sabrine added that she came to the rally because “strength comes in numbers. If we stay silent, we’re supporting the oppressors.” Manal agreed, adding, “We’ve seen so many things in history, like with Hitler, and it’s like, ‘How could that happen?’ But now here we are repeating many of the things over and over again. Separating families, ruining lives, doing this to children’s lives and mental states. If someone is coming to America, they are running from something. Who are we to push them out?”

Manal said the attacks on immigrants were aimed at providing a scapegoat for the social crisis. “When people can’t find jobs, they blame immigrants. They say they’re coming in to steal the jobs.” Nadal added, “It all comes down to money.” None of the three students believed the Democratic Party provided any real alternative to the Trump administration. “I had always sided more with the Democratic Party in my life,” Manal said. “Recently, ever since Trump ran and won, it’s been ridiculous. What you see from both parties is so terrible.” 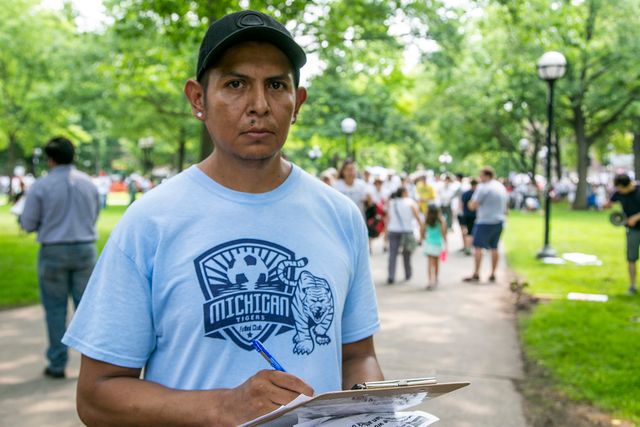 Francisco, an immigrant worker from Mexico City who lives in Ann Arbor, said, “Why can’t we have some program for immigrants to be allowed to be here and work, and to be able to go back to visit our families? To live our lives? [The Democrats] talk too much about the KGB from Russia. Look around! There are police forces everywhere here! It’s on another level.”

Francisco said that immigrants were under attack so they could be exploited by the rich. “They don’t want to help us because they want that money. They have a war to fight, and they need to pay for it.”

He went on, “I’m sure that there’s a lot of people that really believe it’s time to change. It’s going to get to the point that some generation is going to even talk about revolution. A revolution is a big deal, a fight against the whole government, with an army on your side. There could be a lot of blood. But a war—that could be the end of everybody! And the United States is pushing too much against Russia, China, all these countries that the US thinks it can pass over and do whatever it wants. But it’s not going to be so easy.