“US autoworkers have to accept a culture of poverty”

Sergio Marchionne, the Italian-born CEO of Fiat Chrysler Automobiles (FCA) who collaborated with the trade unions in brutally attacking the jobs, wages, and working conditions of autoworkers throughout the world, died Wednesday at age 66. 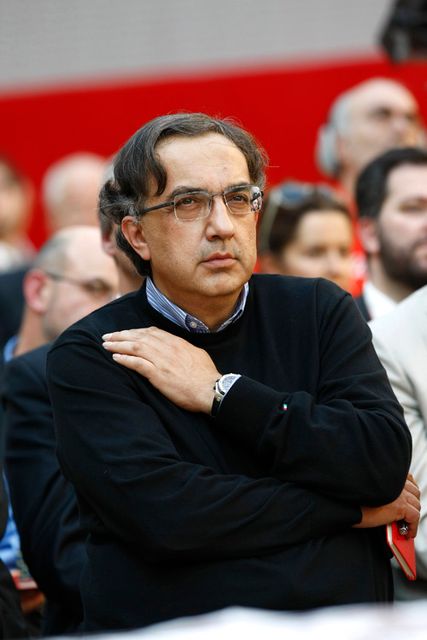 Marchionne had reportedly been undergoing treatment at a hospital in Zurich, Switzerland, for over a year. According to the Italian site Lettera43.it, he suffered an embolism during shoulder surgery for cancer several weeks ago and slipped into a coma, from which he did not recover. On Saturday, FCA announced that Mike Manley, head of the company’s profitable Jeep and Ram brands, had been appointed to replace Marchionne as CEO.

Marchionne has received glowing eulogies in the corporate media for, among other things, “saving Chrysler” when Fiat took over the bankrupt US automaker in 2009. The auto executive, who had duel Italian and Canadian citizenship, was a brutal cost cutter who knew the value of paying off the unions to beat back the resistance of workers to the slashing of jobs, plant closures and destruction of the hard-won achievements by workers in Europe and North America.

Marchionne’s death comes in the midst of an unprecedented crisis for the United Auto Workers (UAW) union. An ever-widening corruption scandal has revealed that FCA executives funneled bribes to UAW officials in order to secure “company friendly agreements” since at least 2009, when Fiat took control of Chrysler.

A year before Marchionne joined Williams to express shock and “disgust” over the money-laundering scheme, federal prosecutors had questioned Marchionne in downtown Detroit in July 2016. It strains credulity to believe FCA chief had no knowledge that FCA Vice President Alphons Iacobelli was handing out bribes to leading UAW negotiators to make them “dumb, fat and happy,” according to the criminal indictment.

The UAW, which was handsomely rewarded, both legally and illegally, for working with Marchionne to restructure the auto industry and decimate workers’ living standards, has rushed to issue fawning tributes to their late partner.

Gary Jones, who was recently appointed president of the UAW at the union’s constitutional convention in June and who saw the salary for his position rise 30 percent to $199,000, wrote in a statement Wednesday:

Our thoughts and prayers are with Sergio’s family. And when history looks back at his legacy, despite bumps and bruises along the way, in the end, the sun wasn’t setting when he left the company, the sun was rising. That will long be remembered.

Cindy Estrada, former-UAW vice president for General Motors, now for Fiat Chrysler, who has also been linked to the bribery scandal, wrote separately:

UAW FCA members recognize that Sergio Marchionne helped build a growing company that provides job stability and certainty for their families every day… We may have had some tussles along the way at the bargaining table. But Sergio Marchionne never abandoned his commitment to the collective bargaining process even when he disagreed with membership. For our members the success of his vision changed peoples’ lives. That is a rich legacy. (Emphasis added).

Dennis Williams, infamous among autoworkers for warmly embracing Marchionne on stage at the opening of the 2015 contract negotiations, has yet to issue a statement—either on the executive’s death or the accusations made by Johnson. 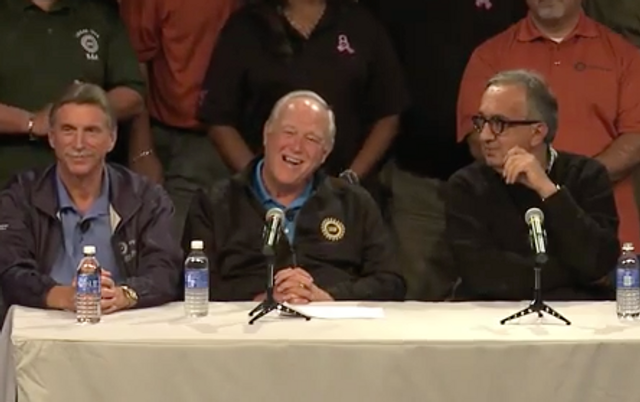 An FCA worker in Kokomo, Indiana, where workers recently voted almost unanimously to authorize a strike over numerous health and safety grievances and the abuse of temporary part-time workers, rejected Estrada’s statement, stating that Marchionne in reality attacked “people’s wages, got rid of pensions for new-hires, added AWS [the Alternative Work Schedule, which eliminated the eight hour day], and created a three-tier wage system.”

In its gushing statements on Marchionne’s passing, the UAW is mourning the loss of a patron, a man who saw the benefits of satisfying the corrupt appetites of the union bureaucracy, in order to beat back opposition and impose management’s dictates.

What was Sergio Marchionne’s “rich legacy”?

Sergio Marchionne was born in 1952 in Chieti, Italy. His father was a Carabiniere, a member of Italy’s military police. His maternal grandfather, Giacomo Zuccon, suspected of fascist sympathies, was killed by Yugoslav partisans in 1943.

Marchionne moved to Canada at 13, attended university in Toronto, studying philosophy and later law. After working as a tax specialist and accountant, he served as a senior manager and later chief executive at a number of Swiss companies, cultivating an image as a chain-smoking, hard-driving “turnaround specialist.”

Marchionne joined Fiat’s board of directors in 2003 and was appointed CEO in 2004. As the WSWS wrote in 2009, as Fiat was planning a wave of plant closures throughout Europe, “Sergio Marchionne is a typical representative of the layer of financial managers who run industrial enterprises as if they were hedge funds, i.e., buying up enterprises, slashing labor costs and then selling them again in order to pay back the debts of the investment funds and increase the wealth of the financial backers.”

In carrying out his attacks on jobs and wages, Marchionne found compliant partners in the Italian trade unions. “Marchionne does not fit the pattern of managers to which we are accustomed in Italy,” Guglielmo Epifani, leader of the Italian General Confederation of Labor (CGIL), said in 2009, adding that Marchionne did not make him feel he was superior.

Following the collapse of the auto industry as a result of the financial crash of 2008, Marchionne engineered the takeover of US automaker Chrysler by Fiat. The company, which along with General Motors had been forced into bankruptcy by the Obama administration, was essentially handed over to Fiat.

In the course of the negotiations, in which the UAW agreed to reopen the 2007 contract, Marchionne, the Obama administration, and the union worked together to impose historic and far-reaching concessions on autoworkers, including the expansion of the two-tier system and halving of wages for all new hires.

Obama’s auto “czar,” Steven Rattner, a multi-millionaire Wall Street investor, wrote in his account of the auto bailout that Marchionne told then-UAW President Ron Gettelfinger in April 2009 that US autoworkers had to accept a “culture of poverty” rather than expect a “culture of entitlement.”

In the book Mondo Agnelli: Fiat, Chrysler, and the Power of a Dynasty, author Jennifer Clark, described the ease with which Marchionne secured the UAW’s acceptance of the “World Class Manufacturing” system, a quality improvement scheme, which entails the imposition of relentless speed-up, greater labor “flexibility” and the erosion of work rule protections.

“World Class Manufacturing seemed to be different, [UAW Vice President General] Holiefield had thought as he looked over the manual that Marchionne had brought. It had a culture attached to it that workers could buy into. It looked empowering. Holiefield knew Chrysler wouldn’t survive if it didn’t improve the quality of its products.

“If this is what you want, you can have it,” Holiefield said. “I will give it to you without a fight.”

The late Holiefield referred to, who led the UAW Chrysler department from 2006 to 2014, emerged as a key figure in the UAW bribery case, spending hundreds of thousands in illegal funds on luxury goods and travel for himself and his wife, Monica Morgan. The money was siphoned from the UAW-FCA National Training Center—one of the numerous labor-management “partnerships” set up by the union and auto companies in the 1980s—and funneled into fake companies and Holiefield’s phony charity, the Leave the Lights on Foundation.

Throughout the contract battles during Marchionne’s tenure—in 2009, 2011, and 2015—only the Socialist Equality Party and the WSWS Autoworker Newsletter called for a break with the UAW and the formation of independent rank-and-file factory committees to oppose the sellouts and unite autoworkers in the US and internationally in a common struggle against the global auto giants and banks. The development of an industrial counter-offensive, the SEP and Autoworker Newsletter explained, had to be combined with political counter-offensive by the working class for a socialist alternative to concessions, layoffs and plant closures.

In 2014, Marchionne, once again revealing his class arrogance, bluntly expressed his determination to purge the factories of higher-paid senior “legacy” workers, telling investors, “We need to freeze the tier ones and make them a dying class… I object violently to the notion of entitlement in the wage structure.”

While Marchionne repeatedly objected to the “entitlement” of workers to decent paying jobs, by early 2018, he held hundreds of millions in stock value alone. Marchionne owned $362 million worth of Fiat Chrysler shares, $190 million of Ferrari NV shares, and $169 million of shares in CNH, the truck and tractor manufacturer, according to a February report by Bloomberg. As the article noted, “The dramatic rise in Fiat Chrysler’s stock has had a multiplier effect on Marchionne’s wealth, putting the 65-year-old executive in the ranks of the mega-wealthy who typically found and own companies, not those hired to run them.”

In recent years, Marchionne eliminated small and mid-size car production in the US, and repeatedly (and unsuccessfully) sought to engineer a merger between FCA and another major auto company. In a presentation to investors titled “Confessions of a Capital Junkie,” he argued that auto industry consolidation—that is, the elimination of “redundancies” through mergers, plant closures, and mass layoffs—was the only way for FCA to maintain profitability.

FCA and Ferrari, the luxury brand, which was spun off from FCA under Marchionne, are now worth nearly 10 times as much as they were when he joined them. The colossal growth in the companies’ stock prices, far from being the product of Marchionne’s business acumen, was fundamentally based on the impoverishment of hundreds of thousands of workers and the suppression of the class struggle by the unions.