Nick Beams, a decades-long leader of the Socialist Equality Party (SEP) and a prominent writer for the World Socialist Web Site, this month completed a successful series of lectures at Australian universities on the contemporary relevance of Karl Marx, 200 years since after his birth.

Events were sponsored by clubs of the International Youth and Students for Social Equality (IYSSE), the SEP’s youth movement, at Western Sydney University (WSU), the University of New South Wales (UNSW) and Macquarie University in Sydney, at Newcastle University, a working class campus north of Sydney, at University of Melbourne and via video link to Victoria University of Wellington in New Zealand.

The meetings were attended by dozens of people, including diverse layers of international and domestic students and academics, along with workers and retirees. 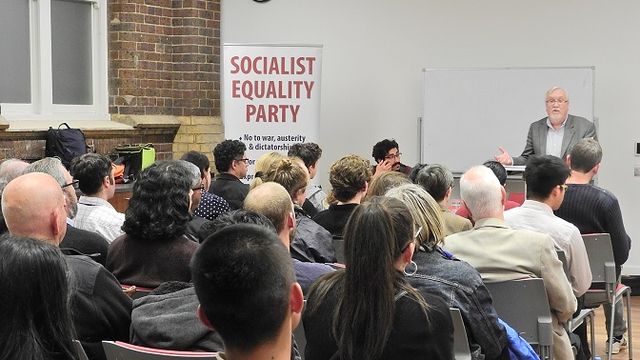 A section of the Melbourne meeting

Beams delivered an extensive report, published separately on the WSWS today. He stressed that the 2008 global financial meltdown, and the social, economic and geopolitical crises that have flowed from it, could only be understood on the basis of the categories and concepts elaborated by Marx.

Beams emphasised that Marx’s theoretical developments were inseparable from his work as a revolutionary to politically arm the emerging working class for the tasks that it confronted. Beams detailed Marx’s major discoveries, including his labour theory of value and identification of the revolutionary role of the working class. He concluded by stressing the need to “carry out the revolutionary task revealed by the analysis and work of Marx” by joining and building the International Committee of the Fourth International.

Beams’ lecture provoked a series of questions at each campus.

The meeting at UNSW was attended by a significant cohort of Chinese international students.

One asked whether Stalinism was an “extreme form of Marxism.” Beams stated that Stalinism was “the antithesis, the opposite, of Marxism.” He reviewed the role of Stalinism, in “betraying countless revolutions” and carrying out “the mass murder of the flower of revolutionary Marxism in Russia." 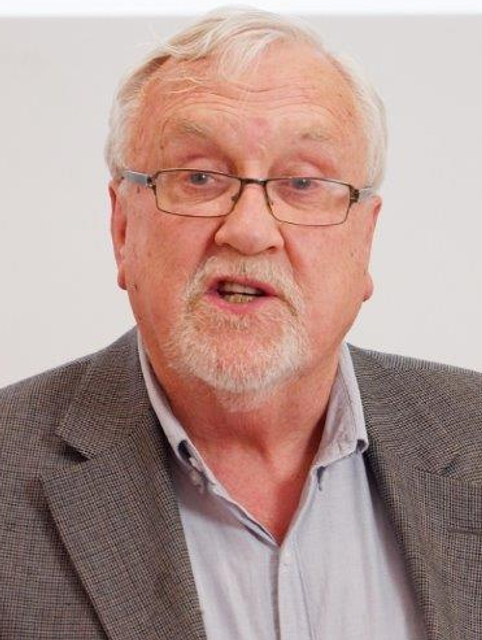 Beams noted that this was a product of the nationalist perspective of the Stalinist bureaucracy, which repudiated the socialist and internationalist perspective which had been the basis of the October 1917 Revolution. Beams stated that this was a decisive issue in China, because “Maoism is a derivative of Stalinism and the fundamental tenet of Stalinism is nationalism. Its origins lie in the perspective of socialism in one country, versus world socialist revolution as advanced by Lenin and Trotsky.”

Another student asked about the role of the peasantry in socialist revolution. In response, Beams explained that it was a “great myth,” promoted especially by anti-Marxist tendencies in the 1960s and 70s, that the peasantry could play an independent revolutionary role. He said: “Trotsky explained this very well in his analysis of the Russian Revolution. The peasantry is an intermediate layer. The two main classes are those of the city: the capitalist class and the working class.

“The peasant is driven into struggle, it is dominated by big capital just as the small farmer is today. But the peasant cannot resolve the fundamental contradictions of society, because the peasant has a fundamentally different relationship to the means of production to the proletariat. The peasant aspires to acquire his holdings. The working class can only resolve the oppression it suffers by overthrowing the very system of private profit and leading mankind to a new stage of historical development.”

Beams explained that the massive growth of the Chinese working class over the past three decades had substantiated the classical Marxist analysis and further refuted the promotion of the independent revolutionary role of the peasantry by Maoism.

Other students asked how the socialist revolution would develop in China, and the global impact that it would have. Another asked for an assessment of the ecological movement.

At Newcastle University, one student asked for “empirical evidence” that Marx’s analysis had been correct.

Beams stated in reply: “The evidence of what is being raised is clear. It is the ongoing and empirical data of the crises of this system. It is not a theoretical postulate on the pages of Das Kapital. We have had two world wars fought for profit, we had the Great Depression.

“Today, in the midst of extraordinary wealth, we have poverty and unprecedented social inequality. We have an enormous technological development over the last 20 years. We’re going to have even more in the next period with Artificial Intelligence and bourgeois economists are worried it will cause ever greater impoverishment. Capitalism is heading from one disaster to another.”

In Wellington, one student took issue with Beams’ emphasis on class, rather than other forms of “identity.”

Beams replied that class divisions were objective and, as Marx explained, it did not matter what members of a class thought about themselves. “We all grew up in different places, we have different ideas and cultural experiences, but these are not germane to the driving forces that overthrow capitalism.”

Beams pointed out that in the Egyptian revolution of 2011, religious barriers “which are supposedly insuperable, were in fact overcome. There was a common struggle in which these various identities didn’t go away, but they were not the determinant driving force.” He said the promotion of identity politics was intended to “divide and atomise the working class along racial, sexual, national, whatever lines it can find,” and divert workers and youth away from a socialist perspective.

WSWS reporters interviewed some of the students who had attended the lectures.

At UNSW, one Chinese international student commented: “I have learned a lot. I have acquired new knowledge, more understanding of the socialist revolution against the capitalist system. I totally agree the working class should be united.” The student expressed his appreciation for Beams’ clarification of the anti-Marxist character of Maoism, stating, “I now have a learning plan to study the real Chinese history.”

Another Chinese international student said: “I became interested in Marxism when I was about 13 years old. I read the Communist Manifesto when I was 14. When I saw there was a lecture about Karl Marx here on campus I wanted to attend. I consider myself a revolutionary, but I have found that nobody I meet understands those ideas. After the lecture, I have the confidence that I do have some comrades, I am not alone.”

Asked about the internationalist perspective of the ICFI, he commented: “I think it is becoming more necessary to fight against nationalism and imperialism, and global capitalism, and important to give up the differences of race, and religion, and strive to unite and fight for revolution.” 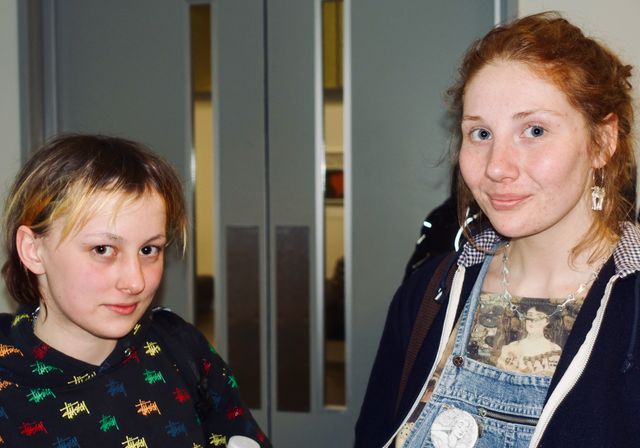 Zoe, who is studying sonic arts at Victoria University in Wellington, said “the talk was especially helpful in going into ideas that I've recently been exposed to,” including the discussion on the need to build a political party and what a socialist revolution entails.

Zoe had become interested in socialism because she “saw a lot of poverty growing up in Blenheim, [in the South Island] where I lived in the poorest area of town." She decided to come to the lecture after watching a Netflix documentary about Karl Marx and reading the Communist Manifesto.

An anthropology student, Caitlyn, told the WSWS she found the lecture “fascinating” because “every other time I've heard about Marxism or communism in Russia or China it’s been in a way that I can’t really identify with, it seems like it was in a different era that I have no context for.” Caitlyn found “especially interesting” the ideas about “identifying as working people, rather than through a religion or through other aspects, to unify in that way.” She said the discussion had helped her to understand why society could not be fundamentally changed by elevating “people of colour or minorities into high-power positions.”

Tenzin, a student in her final year of high school, drew diagrams during the lecture, about the exchange of money for commodities. 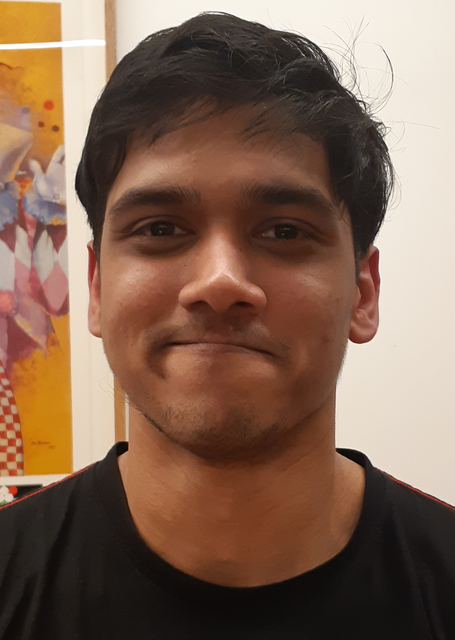 “The lecture was difficult but good,” she said. “I was nodding the whole time, going, yes, throw it at me! Students like myself aren’t really aware of these things, but applying Marxism to our current society reinforces the importance of it. The fact is that this isn’t just history. We can’t just ignore it, because history repeats itself. We’re still capitalistic, our society still revolves around buying and selling of commodities.”

Sayed, an engineering student at Victoria University who is originally from Bangladesh, said: “I could especially relate to what Nick was saying about the state of American politics and how Trump got into power. He was absolutely right. Trump used economic anxieties in the working class to drum up power. Obama made big promises and then didn’t deliver. Workers felt left out and then some looked to Trump.”