The rotating strike initiated last week by the Canadian Union of Postal Workers (CUPW) hit Montreal on Tuesday, with 6,000 workers off the job, and impacted much of suburban Montreal on Wednesday. On the latter day, workers were also on strike in Canada’s capital, Ottawa, as well as Prince Edward Island, and several other smaller Quebec cities, including Sorel, Joliette, and St. Jerome.

Postal workers are angry because of the huge erosion in their living and working conditions in recent decades, in particular since the CUPW ordered workers to submit to the Harper Conservative government’s law criminalizing their 2011 strike and went on to sign a concessions-filled contract.

The rotating strike is designed to dissipate workers’ energy and militancy, minimize any disruption to corporate Canada’s activities and any curtailing of Canada Post’s profits, and to avoid at all costs a confrontation with the union-backed, Justin Trudeau-led, Liberal government.

It also enables the union apparatus to avoid making any payments from the strike fund, since under CUPW rules, workers must be off the job for five consecutive days to receive strike pay.

Wednesday afternoon, CUPW announced another tame pressure tactic. It has imposed an overtime ban, which it says is in protest of management’s failure to address a surge in workplace accidents and injuries due to speed-up and a huge increase in the volume of parcels. In a demagogic statement, union President Mike Palecek said, “Until the Canada Post negotiating team decides to address these issues, we will fix them ourselves.”

In fact, CUPW and the entire pro-capitalist trade union apparatus have no intention of mobilizing postal workers, let alone the working class as a whole against the government-employer assault on public services, working conditions and worker rights. 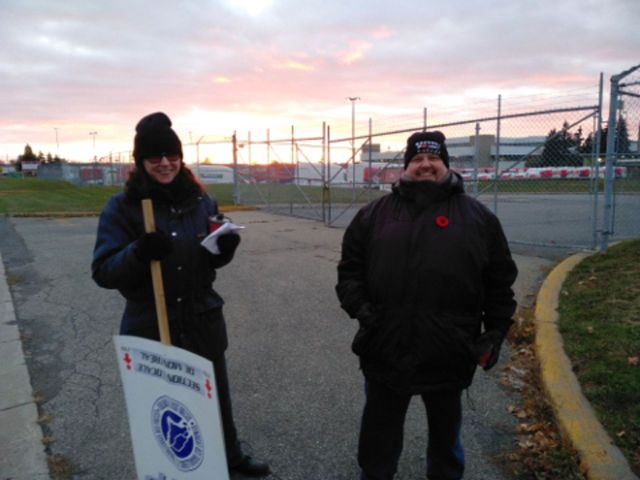 CUPW has mounted no serious struggle against the privatization of much of Canada Post’s retail operations and its much-touted campaign for a postal bank does not challenge the privatization of public services. Rather, the union accepts that Canada Post should be run as a for-profit business and appeals to management and government to provide it with new revenue streams.

Similarly, the union has remained silent on the threat of government intervention to illegalize the strike, although Liberal and Conservative governments have outlawed postal strikes on numerous occasions in the past, including in 1978 when the current prime minister’s father, Pierre Trudeau, threatened to fire postal workers en masse when they didn’t immediately abide by such a law.

Since then, the CUPW, like the rest of the union bureaucracy, has used the passage of anti-strike laws to short-circuit militant struggles.

When WSWS reporters spoke with workers picketing Montreal’s main postal-sorting facility Tuesday evening, many were eager to speak out against the deterioration of their working conditions.

“Before it was more balanced,” said a worker who wished to remain anonymous. “We didn’t talk about work overload as we do today. There was Christmas, but they hired more people at that time”. Now “the workload increases from day to day, no matter what the time of year.” Retirees are not being replaced, she added. 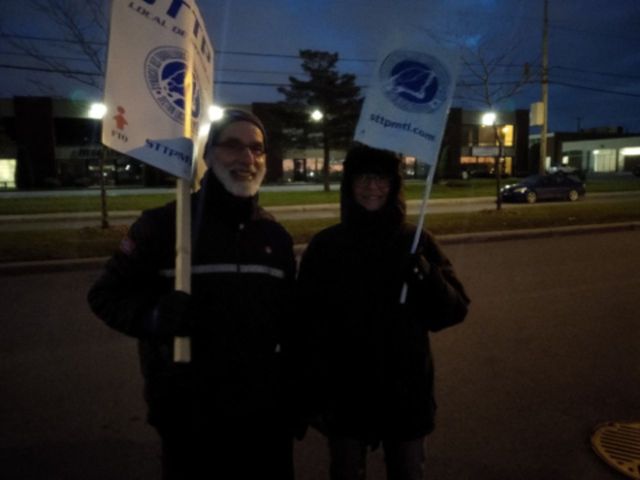 Commenting on the growth of precarious jobs especially for young people, she noted that at Canada Post young people often only have a 20-hour workweek, forcing them to have two jobs. “But you can’t combine your two jobs!” A worker who refuses a shift at Canada Post, because the schedules at their two jobs do not match, can be quickly dismissed,” she explained. “Don’t refuse a second time, or it’ll be bye-bye.”

When the WSWS asked whether workers had voted for rotating strikes, a young worker employed since 2011 said that “it was the union that decided on the rotating strike” strategy. He agreed that “it would be better to have a general strike.”

Two other strikers, Marie and a co-worker, spoke with the WSWS about the decline in living conditions, the growth of social inequality, and past struggles.

Referring to the 2011 strike and the Conservative government’s savage response despite the union’s tame rotating strike strategy, Marie said, “After a few days of rotating strikes, (Canada Post) locked us out. Then the Conservatives put in a special law ordering us back to work, although it was them who had put us on the street.” Speaking of Canada Post and employers in general, Marie went on to say, “Of course they always want to put more in their pockets: except that at some point, we have families to support.”

As for Marie’s co-worker, he had the feeling that we are going back to the 1930s and 40s. A native of Gaspésie, a region hard hit by unemployment, he approvingly referred to his father who had told him that the younger generations will relive the conditions that existed when he was young, that there will only be the rich and the poor without middle classes in between. He added: “There are limits, people will eventually revolt,”

WSWS reporters who spoke with striking postal workers in Edmonton, Windsor, and Toronto last week found workers expressing like grievances. And this commonality is true not just of postal workers or workers in Canada. In the United States, postal workers are fighting against the Trump administration’s plans to privatize the US Postal Service, while in early October, UPS workers rejected a contract only to have it imposed on them by the Teamsters union despite their rejection vote. In France, a letter carrier killed herself last week after denouncing employer harassment, a phenomenon that has provoked local strikes that the union has isolated.

If postal workers and workers around the world are facing the same increasingly difficult conditions, it is because these conditions are determined by the global capitalist crisis. But the unions that claim to represent them meekly submit to every demand of globally mobile capital and keep workers divided between different countries, regions, cities, and industries.

To mount a counter-offensive, striking Canada Post workers must seize control of their struggle by forming rank and file committees, independent of the CUPW and the other pro-capitalist unions, that will make a broad appeal to all sections of the working class for a unified struggle in defence of public services and workers’ social and democratic rights.