By our correspondents
22 November 2018

The Socialist Equality Party (SEP) and the International Youth and Students for Social Equality (IYSSE) held a successful meeting on Sri Lanka’s political crisis last Monday at the N. M. Perera Centre in Colombo. Over 60 workers, youth and housewives attended.

The political crisis was triggered on October 26 when President Maithripala Sirisena sacked Ranil Wickremesinghe as prime minister, replacing him with former President Mahinda Rajapakse in an unconstitutional political coup.

In the lead-up to the meeting, SEP and IYSSE members distributed thousands of Sinhala and Tamil-language copies of the SEP statement, “Fight for a socialist solution to the Sri Lankan political crisis” at universities, in neighbourhoods and in workplaces. 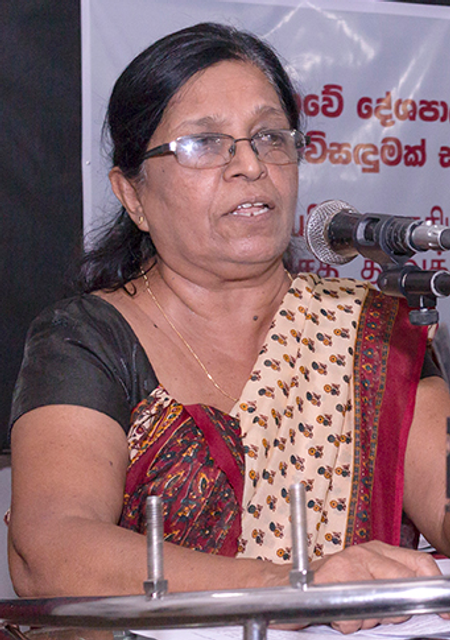 Vilani Peiris, an SEP Political Committee member, chaired the meeting. She explained that the political turmoil in Sri Lanka is part of a world crisis of capitalism. Sri Lanka, she noted, is viewed as critical geo-strategically in the US-led confrontation with China, which India is also centrally involved in.

Whether Wickremesinghe or Rajapakse was victorious in the ongoing factional struggle, Peiris warned, the next government would be subservient to the imperialist powers. She noted that the US, the EU and India are presently backing Wickremesinge, because of their concerns that a Rajapakse government will orient towards Beijing.

The crisis is prompting a further lurch towards authoritarianism, with Sirisena taking key ministries under his control and Rajapakse asserting that the president can appoint whomever he likes as prime minister.

Peiris explained that the pseudo-left Nava Sama Samaja Party was promoting Wickremesinghe as a “great democrat.” This was aimed at tying the working class to the ruling elite and covering up the anti-democratic record of his United National Party. 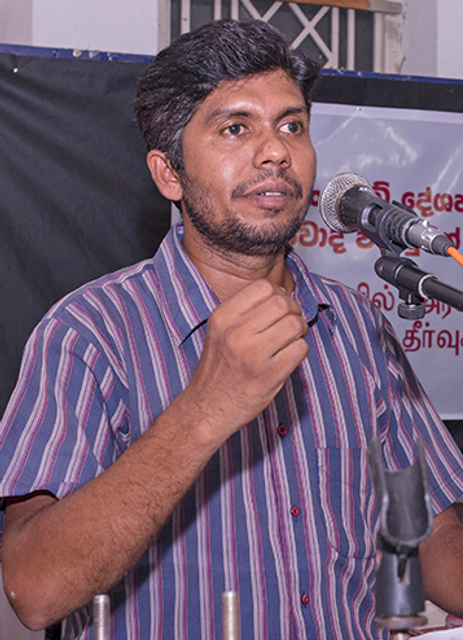 Kapila Fernando, the IYSSE convener in Sri Lanka, outlined the pro-imperialist character of all of the bourgeois parties, including the UNP and Sirisena’s Sri Lanka Freedom Party.

While some leaders of his faction have criticised the Western powers for supporting Wickremesinghe, Rajapakse has signalled that a government he led would work with the US and India. Fernando noted that Rajapakse’s previous government had collaborated closely with the US military as it was waging a brutal war against the separatist Liberation Tigers of Tamil Eelam.

Fernando said that an emerging movement of university students, and mass struggles of workers and the poor, had played a direct role in precipitating the political crisis. He called on young people to turn to the working class, and reject the attempts by the student unions to subordinate them to one or other faction of the ruling elite. 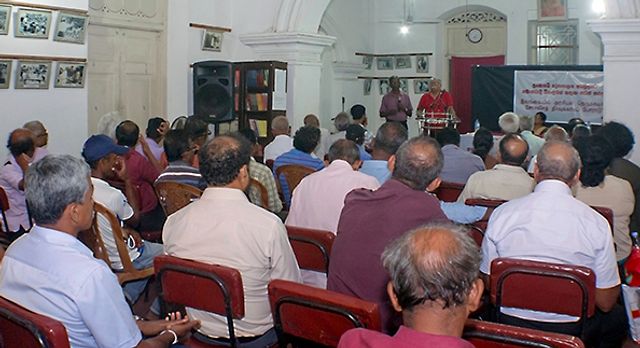 The main speaker, SEP general secretary Wije Dias, explained that the SEP is the only party that has provided a Marxist analysis of the political crisis through its continuous coverage on the WSWS.

“The SEP and the International Committee of the Fourth International do not take this crisis of bourgeois rule lightly,” Dias said. “The implosion of the old parliamentary forms has revolutionary implications from which political conclusions must be drawn by the working class. It can only do this through the political work and analysis of the SEP.

“Intelligent observers would have noticed that two crucial words, ‘capitalist’ and ‘class,’ are missing from all bourgeois and pseudo-left reporting of the crisis. They never indicate that what has erupted is a crisis of capitalist rule and that the fight is between two factions of the capitalist class. This is because such a class characterisation raises the necessity for an independent political perspective and socialist program for the working class and youth, which they oppose.”

Dias explained that parliamentary democracy has always served as a smokescreen for the dictatorship of the bourgeoisie. He cited Vladimir Lenin’s polemic against the reformist arguments of Karl Kautsky, the theoretician of the German Social Democratic Party. Lenin had insisted: “As long as there are exploiters who rule the majority, the exploited, the democratic state must inevitably be a democracy for the exploiters.”

Dias stated that the current conflict within the ruling elite is over how best to prepare the repressive state machine to crush the emerging struggles of workers and the oppressed.

The speaker reviewed the historical attitude of the revolutionary movement to parliamentary rule. He said that when it was introduced to Sri Lanka by the British imperialists, one year before the granting of formal independence in 1948, the Trotskyist Bolshevik Leninist Party of India (BLPI) characterised parliament as “A conspiracy against the people.”

Although the BLPI later retreated, the SEP and its predecessor, the Revolutionary Communist League, had upheld this revolutionary socialist perspective for the past 50 years. While intervening aggressively in parliamentary elections, the SEP had always insisted on the necessity to establish a workers’ and peasants’ government based on independent organs of working class power.

Outlining the SEP’s responsibilities in the present crisis, Dias cited a speech delivered by WSWS International Editorial Board Chairman David North during the crisis triggered by the theft of the US national election by George Bush and the Republican Party in 2000.

North wrote: “In the final analysis it is not the power of the capitalist state alone that blocks revolution. At a more profound and historically essential level, it is the lack of political confidence and consciousness, within the broad masses, of their ability to intervene and reconstruct society from top to bottom.” North added: “But the present crisis will provide an impulse for significant and progressive shifts in social consciousness.”

The political upheaval in Sri Lanka, Dias said, was set in motion by processes stemming from the breakdown of world capitalism which began with the financial crisis of 2008. This had led to revolutionary struggles by the working class in Tunisia, Egypt and elsewhere.

In Sri Lanka, major protests had erupted in the free trade zones in 2011, followed by a movement of fishermen against fuel price increases in 2012, and mass demonstrations in 2013 over unclean water.

Rajapakse, who was then president, had unleashed police and military repression against each of these struggles. He then called early presidential elections in 2015 in a bid to derail the emerging movement.

The pseudo-left groups and trade unions gathered around the bourgeois “common candidate,” Sirisena, fraudulently claiming that he would champion “democracy” and grant social concessions. In this, they were backed by Washington, which was increasingly concerned over Rajapakse’s growing ties with China.

“The bourgeois ‘unity’ government of Sirisena and Wickremesinghe, which came to power on the shoulders of these rotten advocates of ‘democracy,’ used violent force to suppress the struggles of workers from the outset,” Dias said. The police and military were deployed against strikes and protests involving postal, electricity and port workers, university staff, students and the rural poor.

The developing movement had exacerbated the crisis of the government, leading to last month’s split between Sirisena and Wickremesinghe. 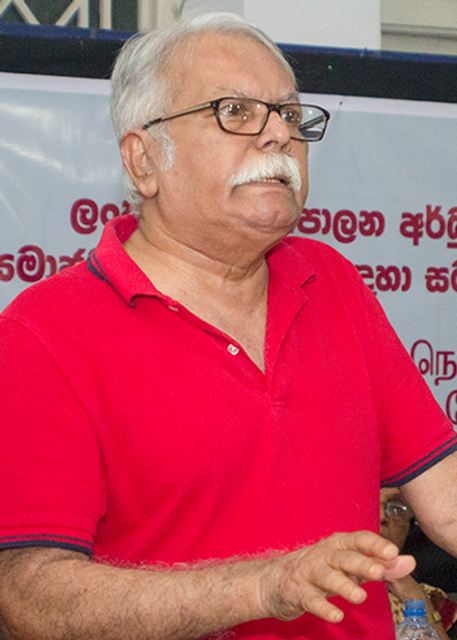 Dias said: “Although the class struggle is subdued at present under the weight of the rapidity of the political crisis and the confusion it has caused, mass struggles against war, austerity and dictatorship are on the agenda. This is why the more thoughtful sections of the elite are clamoring for a compromise between the two factions before any intervention by the masses.”

Dias noted that the imperialist powers were actively seeking to stabilise bourgeois rule on the island and maintain their dominance in South Asia.

He quoted a Sunday Times article reporting a US embassy statement last week, which declared there was “much at stake” in the ongoing crisis. “US foreign policy towards Sri Lanka considerably improved from January 2015, with more direct military-to-military exercises, exchange and training programs … The participation of senior US, Japanese and Australian military leadership at key Sri Lankan defence and security seminars during the last two months underscores the importance the countries have placed on ties with Sri Lanka,” it noted.

Dias stated: “These developments further underscore the vital importance of the politically independent intervention of the working class in the crisis. A perspective for such an intervention cannot come out of the blue. It needs to be firmly grounded on the strategic experiences of the past class struggles.”

The repository of the political lessons of those experiences is the Marxist movement, of which the contemporary representative is the International Committee of the Fourth International (ICFI). Above all, it is necessary to build the SEP and the ICFI as the leadership of the emerging revolutionary struggles of the working class.