A stage-managed “debate” conducted yesterday on refugee policy at this week’s Australian Labor Party national conference in Adelaide pointed to an underlying feature of the preparations being made for a Labor government.

For electoral purposes, claims are repeatedly being made throughout the three-day conference that a Labor government would deliver “fairness” and even “compassion,” in contrast to the current Liberal-National government.

In reality, the party’s program is one of maintaining, and deepening, the decades-long bipartisan attack on the basic rights and conditions of the working class, including those of the most vulnerable layers, such as refugees and the unemployed.

At the same time, Labor is proposing to continue expanding the police-military-intelligence apparatus, whose central purpose is to suppress social and political unrest.

Media reports that dissent over refugee policy could be a “flashpoint” at the conference proved misleading. Labor’s factional leaders came together to agree to keep a Labor government committed to militarily “turning back” all refugee boats and detaining asylum seekers in appalling conditions in camps on remote Pacific islands.

This factional deal permitted Labor leader Bill Shorten to pre-empt the afternoon’s debate on refugees by announcing the party’s policies during a speech that morning. While he looked forward to a “constructive debate,” Shorten said he wanted to make clear what a Labor government would implement.

Shorten’s most revealing pledge was to triple the number of Australian Federal Police officers deployed to Indonesia and other countries to block or “disrupt” the departure of refugee boats to Australia.

The Labor leader further announced that one of his first acts as prime minister would be to consult with the chiefs of the Australian Defence Force, the Home Affairs Department and the Australian Security Intelligence Organisation (ASIO) on measures to strengthen the current “border protection” regime of repelling refugee boats.

Innocent asylum seekers fleeing war, persecution, poverty and oppression will continue to be the targets of these police, military and spy agencies. But this repressive stance is also a warning of the brutal methods that a Labor government will use to enforce its pro-business program on the working class as a whole.

To further stop refugees fleeing to Australia, Shorten promised to commit $500 million over five years to support the UN High Commissioner for Refugees in screening asylum applications in Asian and “closer to source” countries.

This means foisting more of the burden of the global refugee crisis—predominantly caused by US-led and Australian-backed wars in the Middle East and northern Africa—onto impoverished countries least able to cope with the scale of the human suffering.

Shorten said a Labor government would take up a token offer from the Labour Party-led coalition government in New Zealand to annually “resettle” up to 150 Nauru and Manus detainees.

But this deal would be on the same “terms and conditions” as an agreement that the Coalition government struck with the Obama administration, designed to bar the refugees from ever being permitted to live in Australia.

Shorten claimed that when the last Labor government, in which he was a senior minister, reopened the Nauru and Manus camps in 2012, it “never meant” to keep people indefinitely incarcerated in conditions that would destroy their mental health.

That is rewriting history. When Labor reintroduced the “Pacific solution” of the previous Howard Coalition government, Prime Minister Julia Gillard emphasised that, in order to deter refugees, they could be detained for many years.

Shorten foreshadowed a small gradual rise in the annual official refugee intake from the current level of 18,750 to 32,000, with a “community-sponsored” program increasing “over time” from 1,000 to 5,000 a year. Based on a Canadian model, this scheme shifts the costs of refugee settlement onto charities or employers that sponsor “humanitarian entrants.” 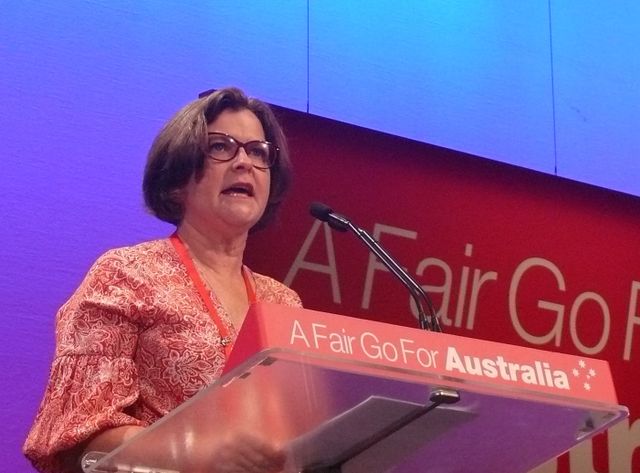 Former Australian Council of Trade Unions president Ged Kearney, who has postured as a defender of refugee rights, was assigned the task of moving the agreed resolution. It vaguely urges a Labor government to “prioritise resettlement of all eligible refugees on Manus and Nauru” in third countries, but sets no time limit.

Kearney described the motion as “not perfect,” but claimed it “gets us closer.” She shamelessly declared it to be the party’s “most progressive policy ever” and praised “Labor for Refugees,” an internal cross-factional group, which agreed not to pursue an amendment calling for an end to boat turnbacks and offshore imprisonment.

“Left” faction leaders ensured that a negotiated amendment was passed without any opposition. A small number of delegates voiced a barely audible “no” vote, and made no call for a vote count.

The only disagreement arose on a subsequent amendment to give appeal rights to about 6,000 asylum seekers already living in Australia whose refugee applications had been rejected by a “fast track assessment” process introduced by the Coalition government.

Shadow immigration minister Shayne Neumann flatly opposed the proposal on the grounds that it had “budgetary implications.” After this display of open contempt for the basic legal rights of thousands of refugees, the amendment was defeated, again without a vote count.

Just before the refugee policy session, a dozen young people held a sit-down protest in the foyer, urging delegates to “close the camps.” After about half an hour, police and security guards escorted them out of the conference venue, the Adelaide Convention Centre.

The demonstrators’ anger at Labor’s bipartisan unity with the Coalition gave some idea of the deepening popular disgust with the barbaric treatment of refugees by successive governments. 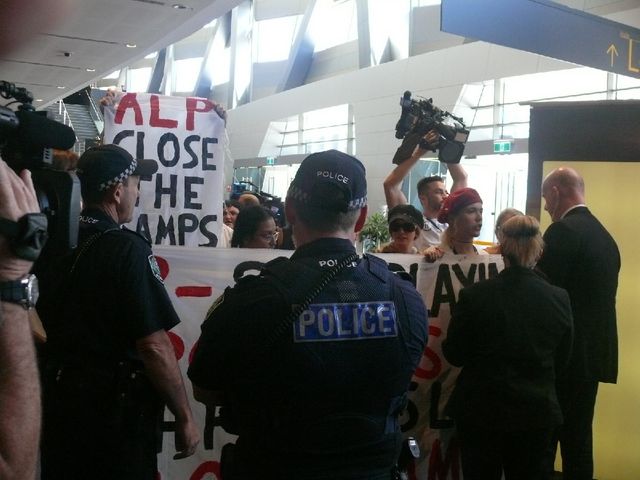 Protesters being confronted by police

Despite the anti-refugee consensus already being stitched up, the protest spokeswoman made a futile appeal for the Labor Party to “find its conscience” and for the Left faction to “consider its humanitarian values.”

This only serves to sow illusions in the same party, and Left faction, that pioneered the mandatory detention of refugees under the Keating Labor government in 1992. Moreover, the prime minister who reopened the Nauru and Manus camps, Julia Gillard, was a Labor “Left.”

Labor’s supposed “progressive” policy is in line with that foul record. It also mirrors the promotion of anti-refugee and anti-immigrant xenophobia by the Trump administration in the US, and governments across Europe—all of which are militarising their borders and shutting out refugees.

Labor and the unions are seeking to divert the mounting discontent in the working class over escalating inequality and deteriorating social conditions in reactionary nationalist directions, pitting them against workers, including vulnerable refugees, in other countries.

This poisonous nationalism should be rejected. Workers must have the right to live and work in whichever country they choose, with full civil and political rights, instead of being treated like criminals.