Top officials from the Unifor union used a rally Friday in Windsor, Ontario, ostensibly called to oppose GM plant closings, as a platform to spout Canadian nationalism. The gathering took place across the Detroit River from General Motors’ world headquarters in Detroit where a stockholders meeting was taking place. 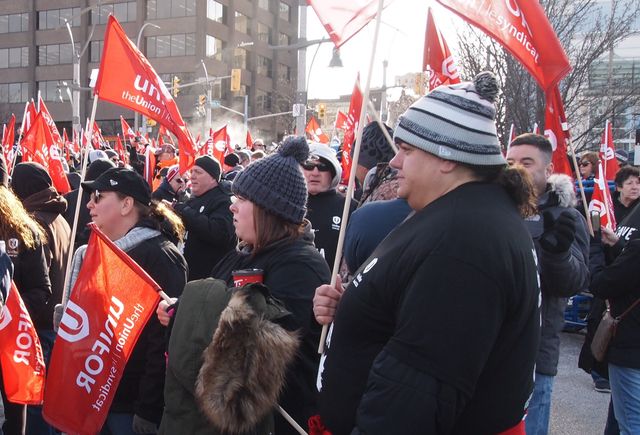 The rally came in the wake of a wildcat job action by workers at the Oshawa, Ontario GM plant slated by GM for closure. Workers staged a sitdown protest Tuesday, stopping production at the facility which employs 2,600, following an announcement by GM reaffirming its plan to close the plant later this year, once one of the largest car plants in the world.

While press accounts claimed more than 1,000 were in attendance at the Windsor rally, there appeared to be far short of that number. It was evident Unifor did little to promote the protest in a city where there are thousands of Ford and Fiat Chrysler autoworkers, including 6,000 at the Chrysler minivan plant alone, which was on shutdown this week.

Unifor has adopted the slogan “Sell in Canada, build in Canada” as its mantra. The union printed up hundreds of jackets with the slogan “Canada didn’t bail out GM to move our jobs to Mexico.” In an evident racist gibe at Mexican workers, a woman festooned in stereotyped Mexican clothing, including a large sombrero, stood near the speakers’ platform.

Further underscoring its nationalist orientation, Unifor made no appeal for a common struggle with US autoworkers on the other side of the Detroit River who face the closure of the Detroit-Hamtramck plant.

Unifor bused in perhaps 300 Oshawa workers to Windsor for the protest. Indeed, the holding of a rally in Windsor, hundreds of miles from the Oshawa factory, seemed to be a calculated move to dissipate workers’ anger and direct it away from the facility, especially in the wake of the wildcat action. 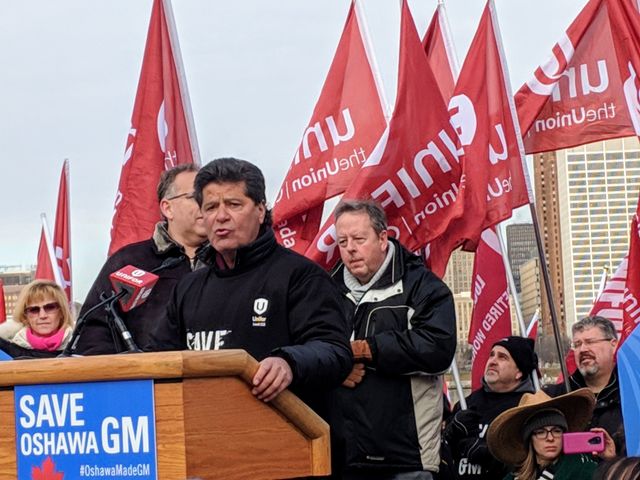 As the main speaker, Unifor President Jerry Dias combined demagogic tub thumping with groveling appeals to GM stockholders and federal and provincial politicians, who he asked to “look in the mirror” to see if they were doing enough to oppose the Oshawa closure. He went on to demand a meeting to discuss the closure with Doug Ford, the ultra-right-wing Conservative Ontario premier, Liberal Canadian Prime Minister Justin Trudeau and GM CEO Mary Barra.

Dias made no appeal to American autoworkers, barely mentioning that four of the five GM facilities slated to close were in the US along with the bulk of salaried workers facing the loss of their jobs. Nor did he mention Ford’s announcement that it is cutting thousands of jobs in Europe. He neither called for any industrial action by Unifor nor did he mention the job action by Oshawa workers.

Indeed, in the previous weeks, Unifor’s focus has been convincing GM that the union can assist in slashing production costs in Canada, including by driving out older, better paid workers and bringing in lower-paid multi-tier workers. 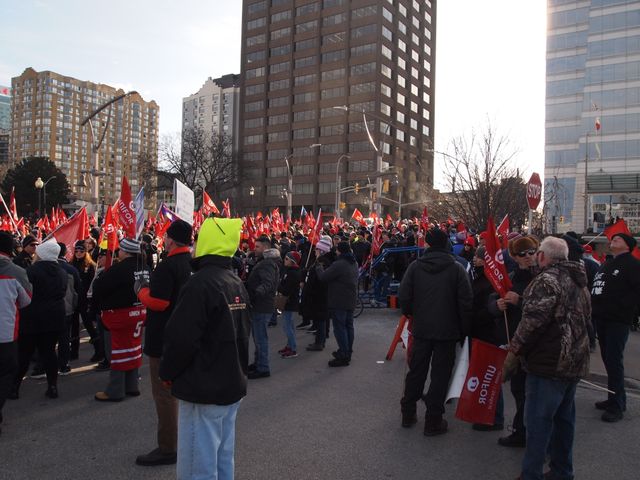 A section of the rally in Windsor

A Socialist Equality Party campaign team distributed copies of the WSWS Autoworker Newsletter with the call by the Steering Committee for Rank-and-File Factory Committees for a demonstration uniting US and Canadian autoworkers February 9 at GM headquarters in Detroit. It also contained an appeal to Canadian autoworkers to reject Unifor’s nationalism and join with their US and Mexican brothers and sisters by forming independent rank-and-file factory committees.

A GM Oshawa worker said that after stopping work Tuesday the workers had been told by management to go home, but everyone decided to stay. Then the next day Unifor had come and asked workers to sign up to come down on a bus to Windsor.

He said he “absolutely 100 percent” agreed with uniting US and Canadian workers in a common fight against GM. “I think that is the next step. It’s about keeping jobs. People can’t live unless they have a job to support their families in some way or another.”

Lisa, a worker from Leamington, Ontario came to support the fight of GM workers. She spoke out against the demonizing of immigrant workers. “Where I am from we have thousands of immigrant workers who are brought in from all over the Caribbean and South America and the companies abuse the hell out of them. 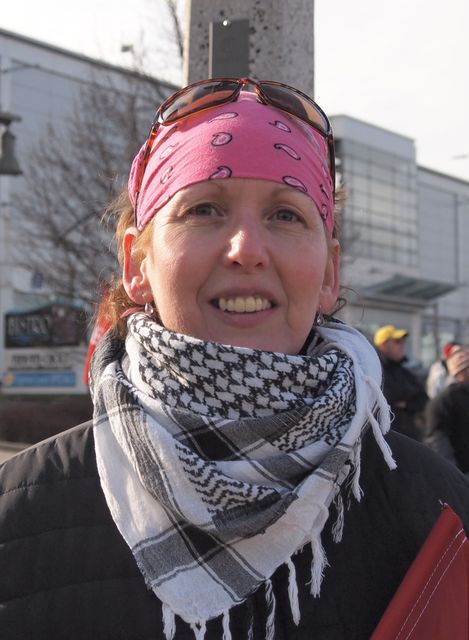 “These workers are forced to accept extremely low wages and bad working conditions and there is nothing they can do about it. The problem is not Mexican workers. They are exploited as hell, worse than us.”

Recalling the promises made in the aftermath of the auto bail-out she noted, “This year they made $6 billion in profits. Could they have done with $5 billion or $4 billion? How much profit is enough? When does it come back to the workers? I’ll tell you—it’s never enough. There is so much corporate greed, meanwhile workers are just trying to get by, send their kids to college and you can’t anymore. You can’t live a normal life anymore.”

While Lisa said she considered herself “pro union” she agreed that Unifor did not seem to be acting in the interests of the workers. 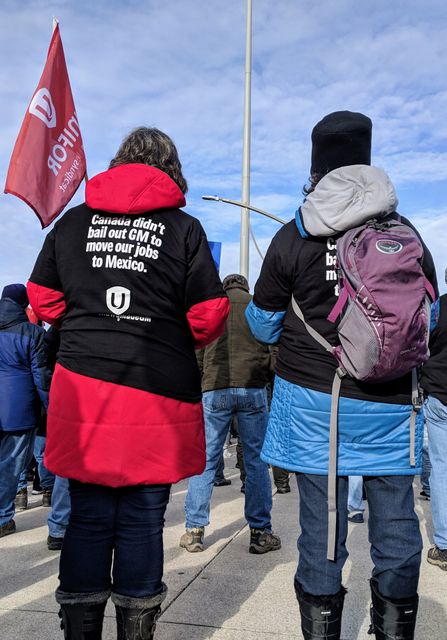 She also agreed with the call by the WSWS Autoworker Newsletter for the unification of workers across borders in a common struggle against the plant closures. “These guys [the union officials] are not militant. What we need are some of those Yellow Vests over here,” she said referring to ongoing protests by French workers. “We need to show them that the workers are united and militant, like they did there.”

The WSWS Autoworker Newsletter also spoke to a number of Fiat Chrysler workers employed at the minivan plant in Windsor who came to show their support for their fellow workers at GM. Windsor Chrysler workers are currently on short time as the company “adjusts” its inventories.

One young worker said he had worked at the plant for just five months, after working at a feeder plant for five years prior.

“We are not working full eight-hour days any more. I was hoping it would stop, but it looks like its not supposed to. No one wants to lose their job. I don’t want GM to pull out, that’s for sure.” 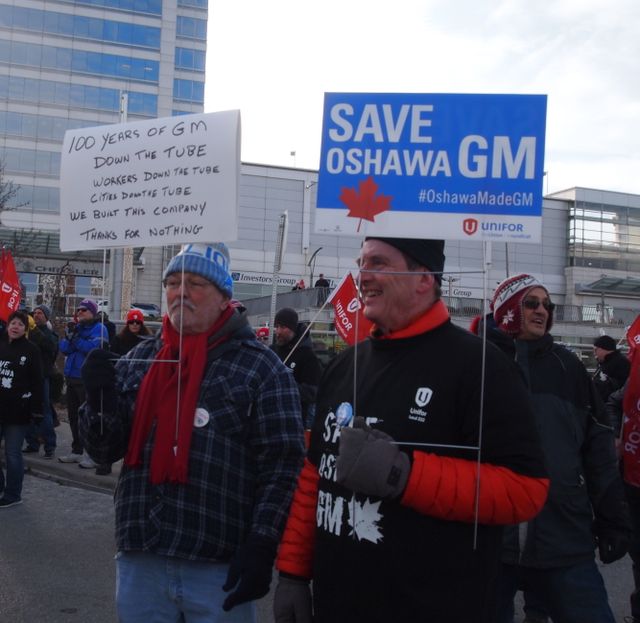 Signs at the rally

When asked about fighting for the international unity of autoworkers he said, “That’s why we are here.”

A veteran Windsor Fiat Chrysler worker said, “I am afraid for my job. We need to be able to feed our families. They are just leaving people high and dry. We have to do everything we possibly can to oppose this.”

When asked about the claim by Unifor that Canadian workers’ jobs were being taken by Mexican workers she said, “I don’t think they are stealing our jobs. We shouldn’t be pitted against each other.”

Another Chrysler worker said she was concerned by the low turnout at the rally, “There is no reason there shouldn’t be 6,000 people down here. We are laid off this week. When it happens to us, who will stand up for us?”