“I think we should take action like the L.A. teachers”

There is growing unrest among the hundreds of thousands of unpaid federal workers and contractors as the partial shutdown continues without an end in sight. As a second missed payday approaches Friday, 800,000 government workers will have gone without their wages for a month and counting, with approximately 500,000 compelled to work without pay.

The World Socialist Web Site spoke to demonstrators on Wednesday afternoon as hundreds of federal workers, contractors, and supporters gathered to protest in the atrium of the Hart Senate Office Building.

Faye, a contractor for the Smithsonian for the past eight years, said she was "broken" by the shutdown and that she had "never experienced anything like this" since she first began work. "I have bills coming, I have a new apartment to pay for." Faye said that she was trying to become a substitute teacher through the county to help pay bills. 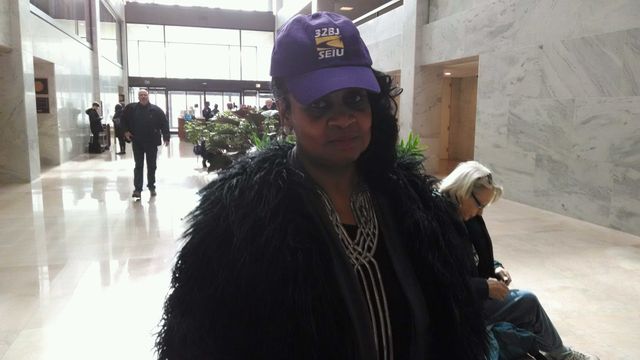 Kendra, a furloughed librarian under contract with the United States Department of Agriculture explained she had been forced to borrow from family and friends, as well as seek unemployment benefits in order to make ends meet. "I'm thankful for family. My parents have helped me, but I know that it is taking money from their retirement savings."

Speaking about the way forward for federal workers, she felt that a "bold strategy" was needed. When WSWS reporters raised the possibility of a strike in order to end the shutdown and guarantee back pay, she said this was a "good question," but had concerns that such an action might be isolated by the trade unions and smothered.

WSWS reporters pointed to the strikes occurring around the US and the world in which workers have rebelled against the unions as well as the corporations, to which she responded, "workers need to coalesce around one another. We need to unite. I am not a part of a union because I am a contractor, but I hope something like that occurs." 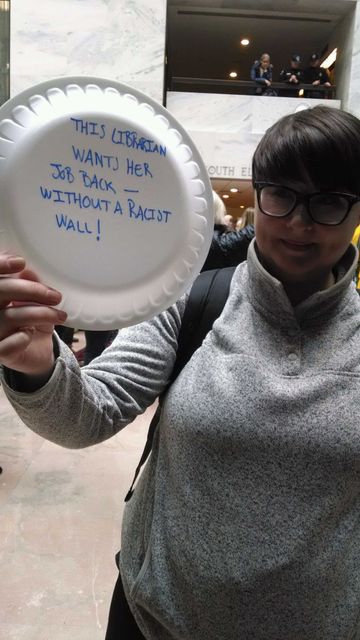 The event Wednesday was organized by a group of unions, including the National Federation of Federal Employees and the American Federation of Government Employees (AFGE), which bargain on behalf government workers, as well as the Service Employees International Union (SEIU) and other unions representing some contractors.

Union officials stood in silence for 33 minutes, one for each day of the shutdown. Following the event a group of about a dozen union bureaucrats, including AFGE President David Cox, chanted loudly outside Senate Majority Leader Mitch McConnell's office, leading to a staged arrest by Capitol Police.

Throughout the 33-day shutdown, the unions have consciously limited their actions to impotent, scattered protests and stunts, promoting illusions in the Democratic Party, while steadfastly refusing to entertain workers’ demands for job action, including strikes.

For out-of-work contractors like Kendra and Faye, the consequences of the shutdown and the union-imposed isolation are amplified, since they will likely not see a penny in back pay for the time they are furloughed. While Congress passed legislation ensuring that workers employed directly by the federal government eventually receive back pay after the shutdown ends, they refused to extend that benefit to the thousands of contracted museum guards, food service workers, custodians, information technology specialists, scientists and others out of work.

An analysis by the Washington Postestimated that 10,000 companies holding contracts with the federal government have been affected by the partial shutdown, representing $200 million a week in value. The number of workers involved may be as high as 1.2 million according to Paul Light, a governmental studies professor at New York University. The US government as a whole employs around 3.7 million civilian contractors, nearly twice the number of federal civilian employees. 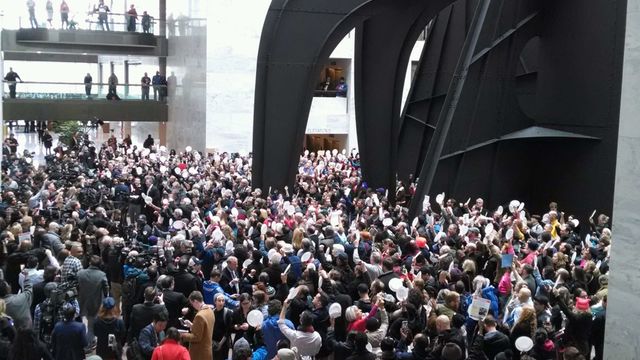 Protesters gathered in the Hart Senate Office Building in DC

The longer the shutdown drags on, the more companies are unable to pay bills and more employees are furloughed. David Berteau of the Professional Services Council, a group of 400 federal contractors, said last week during a call with reporters, “we have tens of thousands of people laid off or not working in the nine cabinet agencies and other agencies shut down. Contractors are feeling more and more impact. Each day, we’re getting notices of stop-work orders from our member companies.”

For unpaid contractors and federal employees alike, going without pay for a month and counting is becoming intolerable.

At the Hart Building rally Wednesday, another worker, Woby, said that federal employees "need to work." She was not interested in a hand out, she said. She felt federal workers were being held hostage "because of Trump's wall." Though Woby's husband works and she says she was okay, some of her co-workers were in "bad shape, one paycheck away from being homeless." 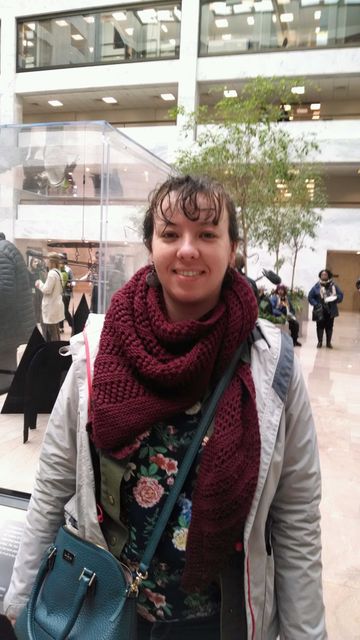 Elizabeth, who works at the Department of Agriculture, said that she was absolutely against Trump's attacks on immigrants, calling the shutdown "self-inflicted by lawmakers." Explaining some of the functions from her job that were affected by the shutdown, she said, "the Department of Agriculture has overseas offices, whenever something like this occurs, food items sit at ports all across the world. This potentially can cause a logjam of goods which help American farmers produce crops." She also noted the "insanity" of Trump's trade war with China, which was impacting people all around the world.

A growing number of workers are being compelled to find additional work in order to compensate for their lost wages. Around a hundred furloughed federal employees attended a hiring event for Fairfax County Public Schools in Virginia Wednesday. This was the third such event in which hundreds filled out applications for substitute teaching.

Simone, a federal worker for 22 years currently working for the Environmental Protection Agency, told the WSWS, “It’s very frustrating to not know every single day what you’re going to do—if you’re going to work. I am here a second time substituting. I substituted during the 17-day shutdown in 2012 as well. I planned ahead in early December. I had a sense this wouldn’t be only a 3-day shutdown.

“I am here with my 10-year old daughter who is in fifth grade. She is trying to wrap her head around why mom is not going to work. She is happy that mom is home to make breakfast each morning but our food is rationed. I cut back on every single thing.”

Asked about the role the unions have played throughout the shutdown, she responded, “I am very upset with the unions. They haven’t come to bat for us. I think we should take action like the Los Angeles teachers.”

The US Government Shutdown