State Republicans in Oklahoma are preparing to introduce a series of bills on February 4 that would punish teachers for striking, participating in political activities and exercising their freedom of speech. The bills are designed to intimidate teachers who are once again considering strike action to win significant improvements in pay and school funding.

Tens of thousands of Oklahoma teachers waged a powerful 10-day statewide walkout in April 2018, but state and national unions shut the struggle down and cut a deal with the state’s Republican governor and state legislature that ignored the educators’ most critical demands.

The proposed bills from both the state Senate and House of Representatives are in anticipation of another strike as early as 2020. House Bill 2214, authored by state Representative Todd Russ (R-Cordell), includes language to make any walkout or sickout by teachers punishable by arrests, fines and rescinding teaching certifications. 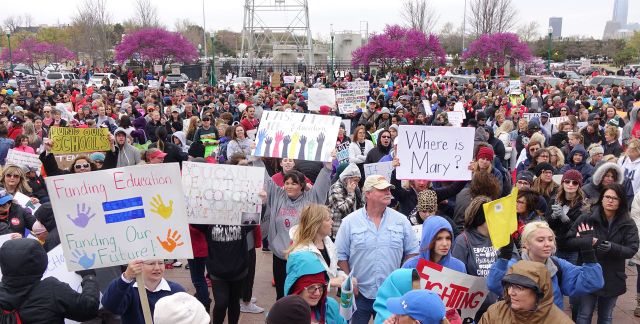 The bill would make it illegal for board of education or school district employees “to strike or threaten to strike or otherwise close schools or interfere with school operations as a means of resolving differences with the board of education, the State Department of Education, the State Board of Education, the Legislature or any other public official or public body.” Anyone engaging in such a strike “shall be denied the full amount of his or her wages during the period of such violation,” and the bill states if the person is certified by the State Board of Education, “such certificate shall be permanently revoked.”

Strikes by teachers and public employees were made illegal in the 1990s. Last April, teachers defied the anti-strike laws, but local school administrators did not try to keep schools open. State Republicans chose not to employ the laws, relying instead on the unions to smother and end the strike.

State Senator Mark Allen (R-Spiro) introduced Senate Bill 574. It requires the 500 school boards in Oklahoma to implement a code of ethics for teachers that would prohibit any political activity, for example, running for office or campaigning on behalf of candidates. It would also prohibit discussing political issues during the school day, or any other time the teacher is considered employed. This is so broad that it could conceivably encompass almost all the time teachers are consumed with school work, which is routinely 16 hours or more.

Senate Bill 592, also introduced by Allen, would require $50,000 bond for any gathering of 100 or more people in the state capitol. This proposal is reminiscent of the “anti-bunching” laws employed by the industrial barons more than a century ago, which made gatherings of four or more coal miners or steelworkers illegal.

The unions promoted state Democrats who have defended the interests of the powerful oil and gas industry and financial sector just as ruthlessly as the state Republicans. The state’s new governor, Kevin Stitt, a Republican, is the former CEO of Gateway Mortgage Group.

The threats against Oklahoma teachers coincide with growing state repression against educators worldwide. In southern India, more than 2,000 striking teachers have been arrested and 400 suspended for taking part in a powerful strike by hundreds of thousands of teachers and public employees. Last month, police attacked striking teachers in Athens.

Emboldened by the Obama administration’s attack on public education with the Race to the Top (RttT) law that provided states with financial incentives to promote school privatization across the nation, Oklahoma has been a testing ground for the “portfolio model” of education promoted by billionaire school privatizer Eli Broad.

During last year’s strike, educators demanded the restoration of cuts to public education that have been greater than in any other state in the US. Oklahoma slashed 30 percent of its general education funding while giving massive tax cuts to the state’s oil producers. Income taxes were cut first in the mid 2000s by the Democrats and then Republicans.

The Oklahoma Education Association pushed through a deal that included an average $6,100 raise, not the $10,000 demanded, and only $50 million in extra funding for schools. Teachers demanded the restoration of the more than $350 million lost through years of cuts enriching the top 5 percent.

The deal is being paid for by a series of regressive taxes: a six cent tax increase on diesel fuel and a three cent increase on gasoline, a $1 tax on cigarettes, expanding types of gambling allowed in tribal casinos, and sales taxes on online purchases. Additionally, a small increase on oil drilling’s gross production taxes was enacted but which keeps the state’s taxation rate at the bottom nationally.

While right-wing Republicans are seeking to use these ruthless laws to strip teachers of any rights, the Democrats in Oklahoma and other states—most recently during the six-day strike in Los Angeles—rely on the teachers unions to suppress social opposition to austerity and social inequality. This underscores the need to build new organizations of struggle, rank-and-file committees, independent of the unions, to reach out to teachers and every section of the working class to prepare a counter-offensive against both corporate-controlled parties.