The Socialist Equality Party (SEP) is pleased to announce that highly respected journalist and filmmaker John Pilger will address the March 3 demonstration at the Martin Place Amphitheatre in Sydney, which will demand that the Australian government immediately act to secure the freedom of persecuted WikiLeaks’ publisher and Australian citizen Julian Assange. The following week, on March 10, the SEP will hold a demonstration at the State Library in Swanston Street, in the centre of Melbourne. Both rallies will be live-streamed via Facebook to a world audience.

John Pilger is a trustee of the Courage Foundation, which is committed to the defence of persecuted journalists and whistleblowers. Pilger has been, and remains, at the forefront of the fight to defend Julian Assange. On June 17, 2018, he delivered a widely circulated speech at the rally organised by the SEP at Sydney Town Hall Square. He told the audience present and watching online: “Assange’s ‘crime’ is to have broken a silence. No investigative journalism in my lifetime can equal the importance of what WikiLeaks has done in calling rapacious power to account.” 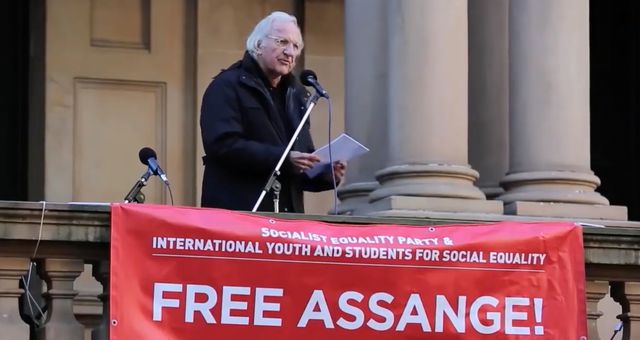 Pilger’s condemnation of the establishment media and its role in spreading lies and falsifications about Julian Assange as “Vichy journalism”—after the French regime that collaborated with the Nazi occupation of France—has been cited around the world.

As well as John Pilger, the Sydney rally will be addressed by SEP National Secretary James Cogan, who has made the defence of Assange a central aspect of his political and journalistic work. Cogan will also be the main speaker at the demonstration in Melbourne. Leading members of the SEP’s youth movement, the International Youth and Students for Social Equality (IYSSE), will speak at both rallies.

SEP members are now campaigning in working class suburbs of both cities to build support and participation in the March rallies. Over the coming weeks, campaigns will be held at key workplaces to call on workers to organise meetings, independent of the trade unions, to move motions in support of Assange and commit to sending delegations to the rallies.

As the universities in Australia reopen this month for the new academic year, the IYSSE will be campaigning during orientation weeks and club days for students to join the demonstrations for the freedom of Julian Assange.

Assange is being persecuted for his leading role in WikiLeaks’ exposures of US-led war crimes, diplomatic intrigues, mass spying and corporate and government corruption. The aim of the vendetta against him is to intimidate and silence independent and critical journalists and would-be whistleblowers.

The SEP rallies will demand that the Australian government immediately exercise its diplomatic powers and legal discretion to secure Assange’s right to leave the Ecuadorian embassy in London, where he sought political asylum on June 19, 2012 and has been effectively imprisoned by British authorities for over six-and-a-half years.

Assange is an Australian citizen. The Australian government has the undeniable duty and ability to intervene and compel the British government to allow him to unconditionally leave the Ecuadorian embassy and return to Australia, if he chooses to do so. Assange has not committed any crime but has been threatened since 2010 with being rendered to the United States for a show trial and decades of imprisonment, or worse, on false charges of espionage or conspiracy.

Assange must be given public assurances by both the current Liberal-National Coalition government and the Labor Party opposition that, if he returns to Australia, he will be protected from any extradition request by the US.

According to lawyer Greg Barns, who represents WikiLeaks, Australian officials from the country's British High Commission did visit Assange this week—only the second time they have done so in over six years. On the eve of the June 2018 demonstrations as well diplomats spoke with Assange, but the Coalition government, then headed by Malcolm Turnbull, did nothing in his defence.

Barns told the Sydney Morning Herald: “They have seen firsthand the untenable situation Julian is in. His health is deteriorating yet he cannot get medical care for fear of arrest. We will be asking [Foreign Minister] Senator Payne to seek undertakings from [the] UK that [Assange] can leave the embassy for health care without being arrested.”

According to Barns, Assange is suffering from chronic pain in one arm and needs dental work.

The sordid complicity of successive Labor and Coalition governments in the persecution of Assange leaves no doubt that Canberra will take serious action on his behalf only if it is compelled to do so by the greatest pressure from below.

The demonstrations in March will also need to be built in complete opposition to what falsely passes itself off as the “left” and “progressive” wing of official Australian politics and journalism.

The trade unions are fully collaborating with the Coalition government and Labor against Assange. In 2010, then-Australian Council of Trade Unions (ACTU) President Ged Kearney declared: “WikiLeaks has broken no Australian law and, as an Australian citizen, Julian Assange should be supported by the Australian government.”

Today, current ACTU National Secretary Sally McManus, who occasionally postures as concerned about social and democratic rights, has nothing to say in defence of Assange, while Kearney sits silent in parliament as a Labor member.

The Media Entertainment and Arts Alliance, the journalists’ union, granted membership to Assange in 2010 in recognition of his services to journalism and the truth. It has not so much as issued a press statement about his persecution in over eight years.

In 2010, the Greens vowed to support Assange. Within months, the Greens lined up with the Labor government it was propping up in parliament and joined the witch hunt against WikiLeaks.

“Independent” Andrew Wilkie, who bolstered his credentials by speaking alongside John Pilger in defence of Assange in March 2011, has likewise abandoned the persecuted publisher and refuses to state a single word of opposition to his treatment.

Against the official conspiracy of silence, the SEP calls on all defenders of civil liberties and democratic rights to circulate information about the March demonstrations in factories, workplaces, campuses and schools across the country and throughout social media.