A recent health report in the Washington Post, citing a study conducted by the Centers for Disease Control and Prevention (CDC), noted an increased use of methamphetamines, injection drugs, and heroin use among women and heterosexual men diagnosed with primary and secondary syphilis.

In the latest edition of the Morbidity and Mortality Weekly report, dated February 15, the authors found that during the period from 2013 to 2017 the national annual rate of primary and secondary syphilis cases in the United States increased by 72.2 percent, rising from 5.5 to 9.5 cases per 100,000 population. 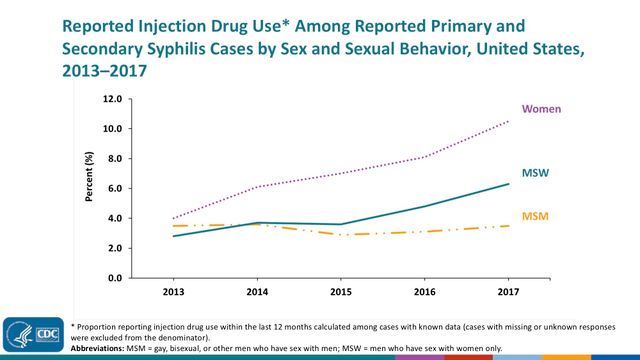 The repository for this data is the National Notifiable Disease Surveillance System. Local health departments treating these patients collect demographic information that includes detailed risk factor assessments, which include information on sexual behaviors and drug use within the preceding 12 months. The CDC extracts this data on sexually transmitted diseases from the 50 states and the District of Columbia to analyze these trends.

The CDC found that among women and men who have sex only with women (MSW) diagnosed with primary or secondary syphilis, those who reported methamphetamines use, having sex with persons who inject drugs, or using injection drugs or heroin themselves had more doubled from 2013 to 2017, the period of analysis.

Until 2013, the increased incidence was attributed to MSM while rates remained low and stable among women. Since 2013, rates among women and MSW have risen alarmingly in association with the rise in reported drug use. According to the study, “These findings indicate that a substantial percentage of heterosexual syphilis transmission is occurring among persons who use methamphetamine, inject drugs or have sex with persons who inject drugs, or who use heroin, and that heterosexual syphilis and drug use are intersecting epidemics.”

Correctly, the study admits that the abuse of drugs and drug-seeking behaviors also lead to unsafe sexual behaviors that put people at risk. This is further aggravated by the social stigma associated with drug abuse and mistrust of the health care system. Furthermore, many of these people lack health care and stable housing, face an abusive penal system, and lack steady employment.

However, like every study of its kind, after making cogent but troubling observations, this one does not address the identified causal factors that lead to these statistical results. These reports beg for a clear political perspective, but this is never forthcoming.

If we want to address these health issues within the population, then we need also to state what is apparent to everyone. As the report notes: “In addition, among persons who use drugs, stigma and mistrust of the health care system along with other social determinants of health (e.g., unstable housing, poverty, incarceration, and lack of health insurance or a medical home) might contribute to decreased health care utilization and reluctance or inability to identify and locate sex partners, resulting in delays in diagnosis and treatment” (emphasis added). The question begs answering, why do these social determinants exist?

The Washington Post, parroting the authors’ conclusions, states the obvious: “To stem the transmission of syphilis, the CDC urges more collaboration between programs that address STDs and programs that treat substance abuse.”

As we previously reported, drug overdose deaths in the US topped 72,000 in 2017. According to the National Institute on Drug Abuse, every day more than 130 people in the US die from an overdose, which includes prescription pain relievers, heroin, and synthetic drugs like fentanyl. The direct and indirect economic burden costs the nation close to $80 billion per year. That includes healthcare, loss of productivity, treatment for addiction and criminal justice involvement.

There is no indication that the rates of drug abuse or STDs are expected to decline, let alone reverse. The US has the highest rates of death from opioid overdose. This study highlights even broader concerns for the health of the populace as younger people will face not only the health crisis posed by drug addiction; this will be compounded by the rise in diseases like syphilis.

The rise in these epidemics is not because of individual weaknesses or failures. These are the byproduct of the social ills produced by the nature of capitalism and its very material impact on the health of working people. And each time new evidence is unearthed, it demonstrates that conditions for working people continue to deteriorate even further.

The federal funding to the CDC for the prevention of STDs has decreased by 40 percent since 2003, essentially halting many state and local programs reliant on these monies.

That the opioid crisis is killing far more people each year than HIV/AIDs ever did in the US highlights the lack of real interest in the establishment of addressing this deadly issue. Despite the fanfare and media blitz, Trump’s promises to deal with the opioid epidemic have not and will not materialize.

A study by Massachusetts General Hospital (MGH) Institute for Technology Assessment, published in JAMA Network Open, projected that the opioid epidemic is likely to increase over the next several years.

The authors found that in a conservative scenario where there was no further reduction in the misuse of prescription opioid drugs in the intervening years, they projected that the annual number of overdose deaths would increase to 81,700 by 2025. They attribute 80 percent of these deaths to illicit drugs like heroin and fentanyl. In all scenarios they tested, they found “interventions directed towards reducing misuse of prescription opioids were projected to decrease overdose deaths by 3 to 5 percent.”