Netflix is currently presenting to its worldwide audience the virulently anti-Semitic television series, Trotsky, which was originally produced by the Russian state in 2017.

Esteban Volkov, Trotsky’s 93-year old grandson, has recently denounced the series as “a political assault, masked as historical drama” and “a justification of the murder of the ‘monster’ called Trotsky.” The Latin American edition of the Spanish newspaper El Pais has described the series as the “second assassination of Leon Trotsky” and rejected its portrayal of the revolutionary “as a sadist, a complete traitor, and as a puppet.”

What is being presented by Netflix is not history. It is not even an artistic fictionalization of history, in which certain liberties have been taken for legitimate dramatic purposes. Netflix’s series is a monstrously reactionary exercise in historical falsification. There is not a single scene that attempts to depict historical events with any discernable degree of accuracy. Most of the scenes are grotesque fabrications. Not a single character, least of all Leon Trotsky, bears any resemblance to the historical figure the series purports to represent.

To state the issue posed by this series as bluntly and precisely as possible: Netflix’s Trotsky is the most explicitly and unrelentingly anti-Semitic film that has ever been presented to an American and international television audience. It is a frenzied incitement to Jew-hating. The inspiration for this production is the Protocols of the Elders of Zion, the notorious Russian anti-Semitic forgery, produced in pre-1917 Russia, that claimed to document an international Jewish conspiracy to take over the world.

The portrayal of all Jewish characters in the movie, beginning with Trotsky, is based on malicious anti-Semitic stereotypes. They are blood-thirsty and self-promoting fanatics, devoid of human pity, contemptuous of the down-trodden masses, and insatiable in their lust for power. They are also obsessed with sex. The main male Jewish character, Trotsky, is denigrated in semi-pornographic scenes, a device of anti-Semitic defamation well-known from the propaganda of the Russian far-right and the Nazis.

The Russian revolutions of 1905 and 1917 are depicted as the outcome of a Jewish conspiracy, funded from abroad. The origin of the Revolution of 1905 is a criminal pact between Trotsky and Alexander Parvus, who obtains funds from the German government. The October Revolution in 1917, the most monumental social upheaval in history, is depicted as a “coup,” orchestrated by Trotsky with the help of only two other well-known Bolshevik leaders who were also Jewish: Lev Kamenev and Grigory Zinoviev.

Trotsky is a demonic figure who revels in death and destruction. Parvus, a significant Marxist theoretician, is motivated by nothing other than insatiable greed and appears like a caricature of the scheming money-grubber familiar from Nazi-era anti-Semitic propaganda films.

Lenin is portrayed as little more than a thug who ultimately falls victim to Trotsky’s conspiracy. 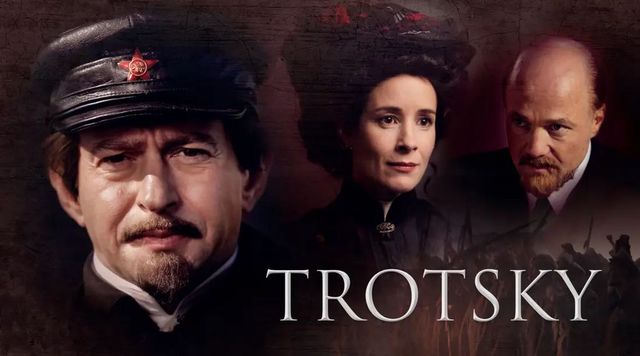 Trotsky cedes power to Lenin, the series implies, only to guarantee the success of his bid for world power through world socialist revolution. In a totally fabricated conversation with Frank Jacson—his future assassin—Trotsky argues that he handed over power to Lenin because “a Jewish ruler would never stay in power in Russia for even a month” and to pursue “my real, genuine goal.” Jacson replies: “Yeah, yeah, I know. To fan the flames of world revolution.” And Trotsky continues: “And as a dictator of Russia I would have only made my hands dirty. The path to power does not always go forward. You need to be able to stop and wait.”

The film’s Trotsky feels nothing but contempt for the Russian people. In a characteristic scene, Trotsky tells his companion, Natalia: “The people is a weak woman. The people have a female psychology.” Natalia replies: “I don’t understand how you can speak with such contempt of the people for whose luck you are, as I understand, fighting.” To which Trotsky answers: “Does a people that have suffered tyranny for decades deserve anything else but contempt?”

In another scene, set during the Civil War, Trotsky, ensconced in the Kremlin, plots the extermination of the Russian population. “We are creating a future into which we will by far not take everyone. Let’s say 30, 50 or 70 percent of the population will die, but the rest will come with us into communism… The cruelty [we will employ] will be of biblical proportions... This is the birth of the new world.”

The only sympathetic figure in this film is Trotsky’s assassin, the Stalinist agent Jacson (Ramon Mercader). He is portrayed as taking up a noble fight against Trotsky, who, the viewers are made to believe, was a veritable demon. In one scene, Trotsky’s eyes actually turn black. In case viewers miss the point, Mercader says of Trotsky, “He’s literally the devil. He sucks my soul out bit by bit, every day.” At the end of the film, the murder of Trotsky is presented as a legitimate act of self-defense by Mercader.

One could cite countless other instances of outrageous, not to mention semi-deranged, fabrications. The series consists of a fusion of hysterical anti-communism and the filthiest anti-Semitic elements of the obscurantist ideologies of the Orthodox Church and virulent Russian nationalism.

The series bears the foul odor of the homicidal anti-Semitism that was propagated by the most reactionary elements in Russia prior to the 1917 Revolution and during the Civil War. In the late nineteenth and early twentieth centuries, Russia witnessed the most murderous anti-Jewish pogroms. The Tsarist regime viewed anti-Semitism as a powerful ideological weapon that could be deployed against the mounting threat of socialist revolution. The Black Hundreds, led by Vladimir Purishkevich, was only the most prominent of the anti-Semitic forces that were mobilized as shock troops against the socialist movement.

The Bolshevik revolution and the ensuing victory of the working class in the Russian Civil War drove many of the leading ideologues of Tsarist anti-Semitism into exile in Germany, where they played a major role in promoting a deadly form of Jew-hatred that exerted substantial influence on what was to become the Nazi movement. As the historian Michael Kellogg has thoroughly documented in his book, The Russian Roots of Nazism, the future leaders of the Third Reich drew heavily in the formulation of their views on the “conspiratorial-apocalyptic White émigré conceptions of international Jewry as a malevolent force that strove for world domination through dastardly means.”

Hitler was introduced in 1919 to The Protocols of the Elders of Zion by his political mentor, Dietrich Eckart. The latter, as documented by Kellogg, “lamented that the ‘Jew Trotskii’ presided over a ‘field of corpses’ that had once been Imperial Russia. He bitterly remarked: ‘Oh, how wise you wise men from Zion are.’” [The Russian Roots of Nazism: White Émigrés and the making of National Socialism 1917-1945, Cambridge University Press, 2005]

Netflix’s Trotsky could have been produced, without any changes, under the auspices of the Nazi regime. Moreover, the fact that the production of this anti-Semitic trash was sponsored by the Putin government testifies to the fundamentally reactionary character of a regime that rules on behalf of criminal oligarchs and desperately fears the resurgence of a revolutionary socialist movement in Russia.

Given the virulently anti-Semitic character of the Trotsky series, one might have assumed that a storm of protest would have greeted Netflix’s distribution and promotion of this film. But nothing of the sort has happened. Despite daily campaigns denouncing anyone who dares issue a word of criticism of the Israeli state’s brutal treatment of the Palestinian people as an anti-Semite, Netflix’s Trotsky has been given a pass. The few reviews in the capitalist media of the United States and Europe that have appeared have made no reference to the film’s blatant anti-Semitism, or even called attention to the innumerable fabrications. The New York Times has not published a review.

In a review published on February 20, The Washington Post’s Luke Johnson notes, without complaint: “The show depicts him [Trotsky] as daring, literate and foreign, reading Freud in Paris and going to a cocaine-fueled soiree, but ultimately violent and destructive.” Johnson recalls with amusement that at a viewing of the film at Cannes in 2017, the Russian producer, Konstantin Ernst, sought to promote the show to potential buyers “by jokingly comparing Trotsky’s sexual exploits to Harvey Weinstein’s misconduct.”

The failure to denounce the Netflix film, let alone demand that it be removed from the company’s roster, is not confined to the media. Jewish organizations have not issued any protest. The World Socialist Web Site attempted to elicit a statement from the Anti-Defamation League but received no callback. Prominent academics have, with few exceptions, maintained their silence as well.

What accounts for this indifference to the presentation of a viciously anti-Semitic work to a mass audience?

First, the cultural and political climate for this indifference has been created by decades of historical falsifications. In particular, the demonization of Trotsky, including the use of anti-Semitic tropes, has been developed by Western academics since 1991. In their books on Trotsky, both Ian Thatcher (Ulster University) and Robert Service (Oxford University), repeatedly referred to Trotsky as “Bronstein” (Trotsky’s original family name which he, however, never used) to highlight his Jewish origins. Service even changed Trotsky’s first name from “Lev” to “Leiba” (a Yiddish form never used by Trotsky or his parents). He described Trotsky’s family as “plucky Jews”, and falsely accused Trotsky of trying to conceal the extent of his father’s wealth. He described Trotsky as “brash in his cleverness, outspoken in his opinions… Trotsky had these characteristics to a higher degree than most other Jews… But he was far from being the only Jew who visibly enjoyed the opportunities for public self-advancement.” Service noted that Trotsky’s “real nose was neither long nor bent.”

Second, under conditions of mounting political crisis, there is an increasing fear of the growth of interest in revolutionary socialism. The ruling elites and their agents in the media and academia are responding to this threat. The historical lie, as Trotsky wrote, is the ideological cement of reaction.

Anti-Semitism and all forms of racism, in the final analysis, are based on the falsification of history. It must be opposed. There are, no doubt, innumerable historians who know very well that Netflix’s Trotsky is a compilation of lies and fabrications. It is time for them to speak out publicly and register their protest.

The International Committee of the Fourth International and the World Socialist Web Site condemn this film as a depraved exercise in historical falsification and anti-Semitic and anti-socialist propaganda. We demand that Netflix withdraw this series from its international network.