The following speech was delivered by Emmy Butlin of the Julian Assange Defence Committee at the Solidarity Vigil for Julian Assange held outside the Ecuadorian Embassy in London, on March 10. 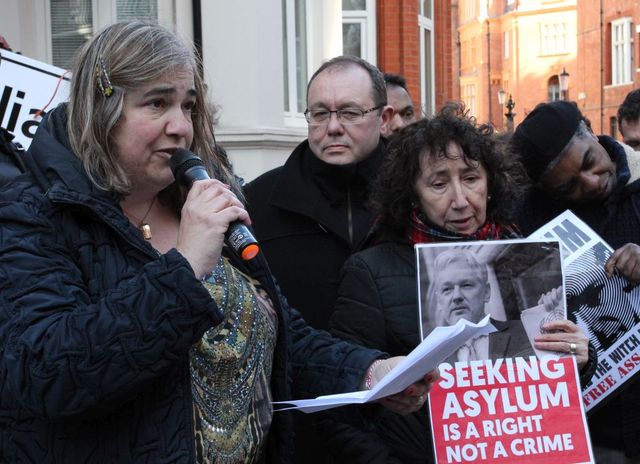 In February, we had two anniversaries that bring home the dire situation Julian Assange faces.

On February 5, it was three years since the United Nations Working Group of Arbitrary Detention published their ruling in his favour demanding he is released and compensated.

Despite this clear direction, the UK has refused to fulfil its international obligations and as a result, on February 23, Julian Assange completed 3,000 days of arbitrary detention.

With a sealed indictment against him in the US that was accidentally revealed late last year, and political developments in Ecuador moving to remove the political protections of asylum and nationality granted to him by this nation, Julian Assange’s freedom and safety have never been at more risk. He endures a draconian protocol imposed inside the Ecuadorian Embassy, including a year’s-long gagging preventing him from publicly speaking not only about his work and opinions, but also about his life and well-being.

WikiLeaks whistle-blower Chelsea Manning was subpoenaed to testify in the WikiLeaks grand jury Department of Justice investigation in the Eastern District of Virginia on March 5. She resisted the DoJ order and she was jailed on Friday March 8.

In her own words she said, “I will not comply with this, or any grand jury. Imprisoning me for my refusal to answer questions only subjects me to additional punishment for my repeatedly stated ethical objections to the grand jury system.

“The grand jury’s questions pertained to disclosures from nine years ago and took place six years after an in-depth computer forensics case, in which I testified for almost a full day about these events. I stand by my previous public testimony.”

It’s extremely important that we listen to these words because the media do not cover widely what she actually said.

She continues, “I will not participate in a secret process that I morally object to, particularly one that has been historically used to entrap and persecute activists for protected political speech.”

These are her own words.

We honour the courageous principled stance she has consistently kept. We take up again the solidarity for Chelsea’s resistance as we did before, with banners, posters and fliers and marching at the forthcoming London Pride. Please support Chelsea by donating to her legal defence fund.

Earlier today in Australia, a rally in Melbourne, organised by the Socialist Equality Party, demanded that the Australian government take immediate action to secure the freedom of WikiLeaks founder and Australian citizen Julian Assange.

We cannot stand by and witness his ordeal unmoved.

We are grateful for the rallies in Australia and inspired by them, we continue in solidarity with Julian Assange. As long as he is in there, we shall be out here. I encourage all to participate in the campaigns run by his legal team and the Courage Foundation, writing to your Members of Parliament and NGOs in the UK.

We need international solidarity to bring about a positive outcome in this struggle for freedom for Julian Assange whose work has served humanity, selflessly and courageously, at a great personal cost. We welcome everyone who believes in justice and in human rights, organisations and individuals, to stand with us in respectful vigil in support of the publisher of WikiLeaks and thank you all for your participation in today’s vigil.