Hundreds of thousands of people took part in protests in France this weekend. The 18th successive yellow vest protest against social inequality took place alongside protests directed against the Algerian regime of Abdelaziz Bouteflika, and a demonstration against climate change.

Multiple police prefectures refused to provide the number of demonstrators in their regions, and the interior ministry claims only 32,300 people joined yellow vest protests across the country. This figure, far below the figures reported in previous demonstrations, was accompanied by claims in the press that the protests are decreasing in size.

In fact, what is shown by the protests is the continuing growth of opposition among workers and youth. The Facebook page “The Yellow Number” reported 230,766 protesters on Saturday, as the yellow vests marked the end of Macron’s fraudulent “grand national debate.” More than 350,000 people protested at the “March of the century” to oppose climate change, according to organizers. Thousands joined protests in solidarity with the Algerian workers and youth demanding the fall of Bouteflika’s National Liberation Front (FLN) regime. 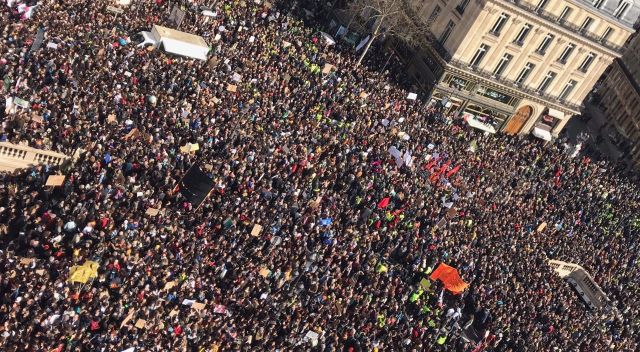 “March of the century”

Fearing, above all, that the mobilization of millions in Algeria may inspire a revolutionary struggle by large sections of workers in Europe—already shaken by yellow vest protests—the government and media have stepped up their denunciations of the protests. Citing acts of public vandalism in which the police have played a murky role, the Elysée and media called for suppression and end to the protests.

In Lyon, 30,000 people protested on Saturday in three demonstrations. The protests against Bouteflika in Algeria were livestreamed on the internet. Thousands demonstrated in Toulouse, a hotspot of yellow vest protests. A group of protesters separate from the group insulated the right-wing mayor, Jean-Luc Moudenc, who denounced the “climate of terror” imposed by the yellow vests. Large protests were reported in Montpellier, Caen and Dijon.

In Bordeaux, where, like in Toulouse, the prefecture refused to provide the number of protesters, thousands demonstrated. Skirmishes broke out with police forces. A retiree at the yellow vest protests told France-Television, “I saw a protester injured by a grenade. He was against a wall and was doing nothing. Many people are sickened by the police’s actions. This will not calm people down. On the contrary. It’s always the same people rioting, and if they [the police] had really wanted to arrest them, they could.”

Yellow vests at the “March of the century” expressed demands both on climate change and also broader social issues. “The yellow vests are not only fighting for higher purchasing power, but also against social injustice and the predatory actions of multinational companies that plunder the planet’s resources,” one participant told Le Monde. A care worker added: “We’re told to buy electric cars, but when you live in an apartment complex, where would you park it, and how can you pay for it?”

On the Champs-Elysées, the police deployed a large force to block off sections of the road, and began firing tear gas from the morning onwards. WSWS reporters noted the presence of a large number of police officers in civilian clothing standing side-by-side with their colleagues on the barricades supposedly established to fend off rioters.

After the arrival of a group of a few hundred people dressed in black and wearing masks, who passed through all the police barricades, clashes broke out between protesters and police. Around 80 well-known store brands on the street suffered damage, including the Fouquet’s brewery, the Gaumont cinema, the Swarovski jewellery store, and the Tarneaud bank.

As masked protesters arrived at the Champs-Elysées, yellow vests who spoke to the WSWS expressed their hostility toward the rioters and their suspicions that they were collaborating with police. One protester from Lyon said: “You come once to protest, and you get hit and tear-gassed. At a certain point there is no longer any respect for the people. In Lyon the fascists come, and they are protected by the police. It’s not normal. We went to find the riot police to get them to protect the yellow vest protesters. They ran away in the other direction.”

He added, “In the protests, half the time they are there infiltrating. We all know them. The cops don’t change. The BAC police insulted my wife. We don’t speak to people like that.” 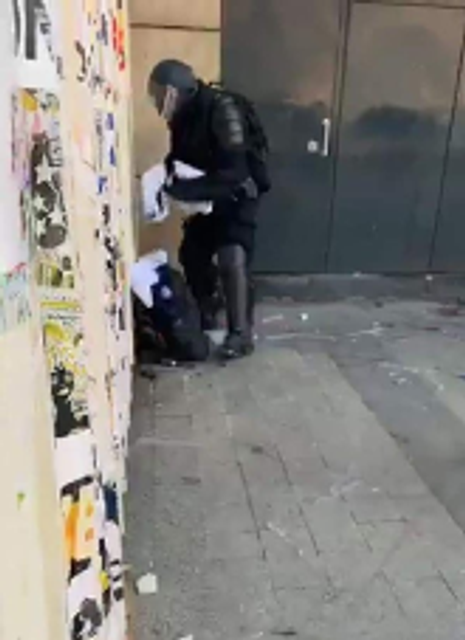 It remains to be established exactly what took place on the Champs-Elysées and above all the responsibility of the police for the events. Police officers were filmed by a reporter, Remi Buisine, as they were stealing merchandise from the store of the Paris Saint-Germain football club. In the video, which has been widely viewed on social media, police strike Buisine to try to take his phone and prevent him from filming. A police source told Liberation that the images of the incident were “embarrassing.” The Paris police prefecture has announced that the General Inspectorate of the National Police (IGPN) would conduct an internal investigation.

The emergence of a mass movement demanding the fall of the Algerian regime since February 22 objectively raises the problem of the international unification of working-class struggles. While strikes are taking place against European austerity measures from Portugal to Berlin, a new revolutionary wave is developing in northern Africa, targeting a regime directly supported by Paris. Terrified by this development, the Macron government is responding with repression and provocations.

Prime Minister Edouard Philippe denounced the yellow vests as responsible for the violence on the Champs-Elysées, because “all those who excuse or encourage the acts that I denounced, in excusing, in encouraging them, become complicit in them.”

While the most serious questions are raised about the role of the police, Macron, rushing back from his ski weekend in La Mongie, also targeted protesters. In an emergency meeting of the interior ministry, he declared that “all those who were there were complicit.”

The government propaganda against the protesters has been taken up by a large section of the media close to the government. On Twitter, Bernard Henri-Levy vituperated: “Let’s stop with the myth of ‘certain’ Yellow Vests, ‘infilitrated’ by the bad ‘rioters.’ This movement of [yellow vests], from day one, has been a factional, hateful and anti-republican movement.”

These are shameless lies and provocations. The vast majority of the yellow vests, and the other protesters from Saturday, were not rioting. The official torrent of denunciations against the protesters is a defence of the tiny capitalist elite in Europe, completely corrupted and no less terrified of the working class than the bloody regime around Bouteflika that they support.

The question posed by the protests is the necessity for a perspective and revolutionary leadership capable of uniting the struggles of workers and youth on an international scale, in a struggle for political power and the overthrow of the capitalist system.