The strike by hundreds of thousands of Polish teachers shut down 75 percent of the country’s schools and kindergartens on Tuesday, according to teacher unions. Educators on Monday began an indefinite national strike—the first since 1993—to demand improved wages and classroom conditions and to oppose efforts by the extreme right-wing Law and Justice Party (PiS) to rewrite the school curriculum to promote the government’s nationalist and xenophobic agenda.

A 90-minute negotiating session on Tuesday between the heads of two unions and Deputy Prime Minister Beata Szydło broke down, with the government saying it had no money to increase its pay offer of 15 percent over several years, which would be tied to an increase in the number of weekly lessons a teacher must give from 18 to 25. 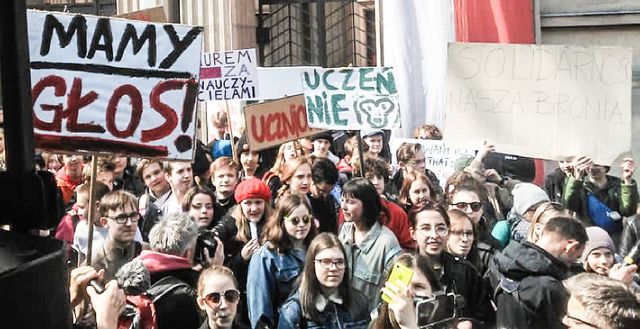 Students protest in Warsaw in support of striking teachers

Szydło called on teachers to return to their classrooms to give final exams to millions of elementary and middle school students that are scheduled for today, while school directors attempt to recruit retired teachers, religious school teachers and non-striking teachers to conduct the tests.

However, the teachers, who are demanding a 30 percent pay raise, remain defiant and are continuing the strike. The walkout has won the strongest support in the cities, but even in rural areas with a lower participation rate, the strike shut down more than half the schools and kindergartens. In total, at least 15,000 schools and kindergartens have been closed due to the strike, and many have hand-made signs hanging on school gates declaring, “Strajk.”

“I absolutely support their strike,” Tomasz Pietka, father of a 4th-grader in Warsaw, told an Associated Press reporter. “They are really earning peanuts for a job that involves responsibility and knowledge,” he said. According to a social media analysis by the internet platform politykawsieci.pl, the hashtag #StrajkNauczycieli had a record reach of 60 million on the internet, with some 300,000 references. (Poland has a population of 40 million.)

Polish media also indicated that high school and middle school students throughout the country were ready to walk out or had already done so. In the capital city of Warsaw, students organizing a “student strike” wrote on Facebook: “We are a group of young people who want to say enough! We have enough of the ossified education system... We will create an organization which will conduct a fundamental reform of the school system in Poland. Our primary goal is to demonstrate solidarity with the teachers. We want to show that the youth are not indifferent and that we will not passively watch what happens to our schools.” 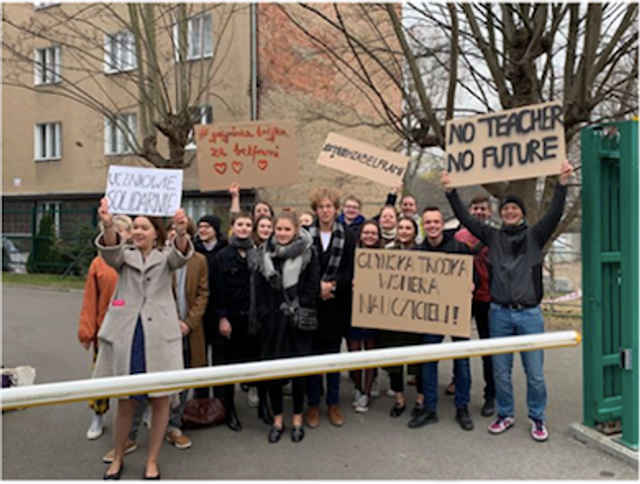 Students carrying signs in support of their teachers at a school in Gdynia. Credit: Strajk Uczniowski

Like the millions of other teachers around the world, teachers in Poland barely survive on their salaries and are forced to work additional jobs to pay their bills. Newly hired young teachers make the minimum salary of 1,800 zlotys (US $470) a month, leaving them in dire poverty. The maximum salary of around 5,603 Zloty ($1,471) a month cannot keep up with the cost of basic food items and other living expenses, which are similar to those in Western European countries.

Talks between the unions and government over wages and conditions broke down Sunday. Facing immense pressure from teachers, two unions—the Polish Teachers Union (ZNP) and the Trade Unions’ Forum (FZZ)—rejected the government’s pay offer and called the strike.

The only union to accede to the government’s demands was Solidarity’s teacher union, which is aligned with the ultra-right PiS government. On Monday, union head Ryszard Proksa, who is also a PiS local government official, denounced rebellious teachers who walked out in defiance of Solidarity and threatened retribution against striking union branches.

Politico cited one teacher disgusted by the union’s strike-breaking. “When the agreement was announced last night, I felt betrayed,” said Marlena Kałużniak, who teaches German in a primary school in the mountain resort town of Zakopane. “I am handing in my resignation from Solidarity today.”

The other two unions are seeking a quick end to the strike. Sławomir Broniarz, leader of the main ZNP union, has said the union wants to “put out this fire” and called early Tuesday for a mediator to help end the standoff with the government, according to the Associated Press. ZNP, the largest teacher union, has already made numerous concessions while demanding cuts to other social programs to fund wage increases for teachers.

While the government claims there is no money for teacher salaries or to improve education, it is spending $48 billion by 2026 to expand its armed forces in line with preparations by the United States and NATO for war with Russia. By 2030, the government plans to raise military spending to 2.5 percent of GDP, in line with Washington’s demands.

The opposition party, the neo-liberal Civic Platform (PO), has attacked the government over its education reform and for its failure to successfully negotiate with the trade unions. When it was in power, the pro-European Union PO implemented some of the most anti-social measures in the history of Poland, in the name of the free-market transformation of the economy. In 2012, it raised the retirement age to 67, attacked the nationalized health care system and shut down state-owned industries, including mining, steel and shipbuilding. It also undertook an assault on education and cultural institutions, liquidating public schools, destroying technical and occupational high schools, decreasing the educational budget and subsidizing private schools for the affluent minority. 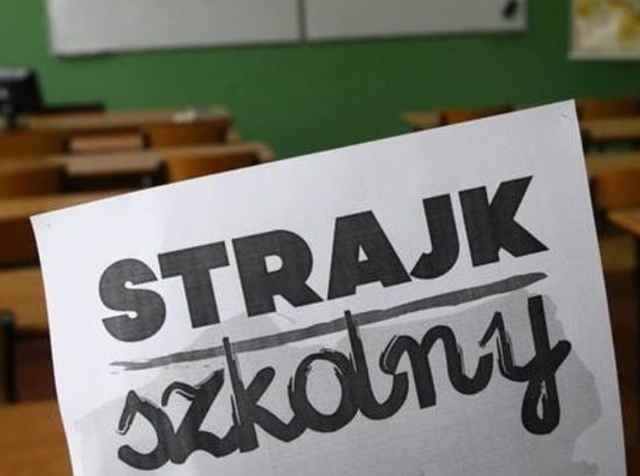 The restoration of capitalism by the Stalinist regime in 1989 has led to a social and economic disaster, not only in Poland but in all of the former Soviet and Eastern European countries. The promises that capitalism would lead to rising living standards and the flourishing of democracy have been belied by the grim reality of social deprivation, the enrichment of corporate and financial oligarchs and the spread of ultra-right and fascistic parties throughout the region.

According to a 2015 report, since 1989, the share of national income going to the richest group of Poles, (one percent of society), has doubled. A report by Poland’s central bank found that in 2016, the top 10 per cent of households held as much as 41 per cent of total net assets, while the net assets of the bottom 20 percent households accounted for barely 1 percent of all household assets.

According to a recent Organization of Economic Cooperation and Development survey, workers and young people in Poland are near or at the top of all 21 OECD countries in several categories of economic insecurity. Sixty-nine percent of all 18-to-29-year-old Poles say they expect to do worse than their parents, while a majority feel that they do not have access to good quality and affordable public services, including housing and health care.

Thirty years after the restoration of capitalism, there has been a rise of the class struggle throughout eastern Europe. The strike by teachers, one of the biggest in decades, follows a two-week strike by workers at the national airline LOT and Polish Amazon workers, and strikes by autoworkers and other workers in Romania, Hungary and the Czech Republic.

The ruling classes and the unions fear the teachers strike could spark a far broader movement of the working class, which could spread across borders and undermine the anti-immigrant agitation every capitalist government has employed in order to impose its program of austerity, social inequality and militarism.