Prime Minister Benjamin Netanyahu is set to form his fourth consecutive Likud-led coalition government after an election that saw a spectacular collapse of Labor, the party that governed Israel for the first 30 years of its existence.

Netanyahu will head a coalition of ultra-orthodox religious and right-wing parties as well as an openly fascistic organization, all of which have pledged to introduce legislation giving him immunity from prosecution for bribery, fraud and breach of trust. He called early elections to face down Attorney General Avichai Mendelblit over his expected corruption indictment for allegedly granting regulatory concessions to businessmen in return for lavish gifts and favourable news coverage. 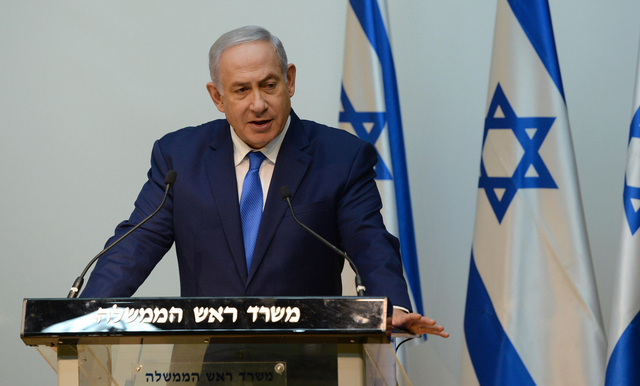 In an unexpectedly close race, portrayed as a referendum on Netanyahu, the incumbent won the same number of seats, 35, in the 120-seat parliament, the Knesset, as the Blue and White electoral alliance of his main rival, former Army Chief of Staff General Benny Gantz. He was able to emerge with a clear road to a new term in office because his allies in the far-right and religious parties won a further 30 seats.

Gantz could at most muster only an additional 20 supporters for his nominally “centre-left” government--a misnomer, as he was offering in opposition to Netanyahu’s fascistic orientation only redoubled militarism. He conceded defeat on Wednesday, the day after the election, when it became clear that Netanyahu’s right-wing bloc had a 10-seat lead.

President Reuven Rivlin will call on Netanyahu to form a government once the 300,000 double-sealed votes by soldiers, prisoners and overseas Israelis, equivalent to eight Knesset seats, have been counted. Since at least two parties are close to the threshold of 3.25 percent of the vote, the distribution of seats among the various parties may change slightly when the final count is announced on April 17.

Included in Netanyahu’s bloc are the religious parties, Shas and United Torah, which increased their seats from 13 to 16, in line with the increase in the religious population; Kulanu, a split-off from Likud, whose seats have fallen from 10 to four; and the far-right Rightist Union, with five seats.

The Rightist Union agreed to an electoral alliance, brokered by Netanyahu, with the fascist and anti-Arab terrorist Jewish Power, comprised of followers of the late Rabbi Meir Kahane, who advocated the “transfer” of Palestinians to neighbouring Arab countries and a ban on intermarriage between Jews and Arabs. The precursor to Jewish Power, Kahane’s Kach Party, was banned as a terrorist organization.

Another right-wing nationalist party, Avigdor Lieberman’s Israel Beiteinu (Israel is our Home), won five seats. Israel Beiteinu quit the government in November last year because of what Lieberman said was an insufficiently aggressive policy towards Gaza, leaving Netanyahu’s government with a majority of one.

Lieberman wants to make loyalty to the Jewish state a condition for citizenship. He has said he would join a Netanyahu-led government only if it waged a proper “fight against terrorism in the south,” i.e., against Gaza; enact a law to draft ultra-Orthodox men into the military; and introduce a pension overhaul to help immigrants, his main support base. Without Israel Beiteinu, Netanyahu will have only a bare majority in the Knesset.

Netanyahu’s far-right and religious allies will seek to leverage his weakened parliamentary position to their advantage, adding to the deepening instability of Israel’s political system.

The New Right party, formed by Netanyahu’s justice minister, Ayelet Shaked, and his education minister, Naftali Bennett, as a split-off from their own nationalist-religious Jewish Home party, is part of Netanyahu’s electoral bloc. It has thus far failed to reach the 3.25 percent threshold. It wants to limit the power of Israel’s judiciary while strengthening the influence of both the executive and the Knesset over the courts, and to free the armed forces of all legal constraints.

Shaked provoked international outrage after appearing in an election ad in sultry poses, promoting a fictional perfume called Fascism. In the ad, she opens the bottle and sniffs its content, saying, “To me, it smells like democracy.”

On Election Day, Netanyahu warned his Likud members against complacency, telling them the party was in danger of losing power to pro-Arab “leftists” and they had to get to the polls. Emboldened by US President Donald Trump’s announcement last month recognizing Israeli sovereignty over the Golan Heights, captured from Syria in the 1967 war, and determined to bolster Likud’s vote over his right-wing rivals, Netanyahu declared his intention, in the final hours of the campaign, to annex the West Bank.

He was able to increase Likud’s seats in the Knesset from 30 to 35 at the expense of his right-wing coalition partners, whose Jewish supremacist and fascistic policies he has adopted wholesale to build his support base. His right-wing bloc remains approximately the same, at 65, as in the 2015 election, on an election turnout of 61 percent compared with 62 percent in 2015.

This corrupt and widely despised politician was able to win the election because of the collapse of the Zionist “left,” upon which Gantz was dependent if he was to form a government. Labor’s vote fell to a historic low, resulting in just six projected seats, down from 19 in 2015, and the same number as the Israeli Arab coalition Haddash-Ta’al. Labor’s parliamentary representation will likely fall even lower, to five, when all the votes are counted.

At the outset of the campaign, Labor leader Avi Gabbay dumped his alliance partner, Tzipni Livni, leader of the Hatnua Party, on live television in the hope of salvaging his party, which is hemorrhaging supporters. With both parties facing electoral wipe-out following the demise of the “two-state solution,” after Trump’s decision to move the US embassy to Jerusalem, Livni and her Hatnua withdrew from the elections and from political life.

The virtual disintegration of the Zionist “left,” which controlled the government for the first three decades of the country's 71-year history, is a measure of the rightward movement of the Israeli ruling class and the political evolution of the Zionist project upon which it is based.

Gantz, a former general with no political experience, had no economic programme to resolve the soaring cost of housing, which sparked mass protests in 2011, nor did he offer any answer to overcrowded hospitals and schools and the totally inadequate transportation system. In a country wracked by social tensions and the highest poverty rate of any of the developed countries, neither candidate addressed the social crisis.

Turnout was reportedly at a historic low—amid calls for an election boycott—among Israel’s Palestinian community, which constitutes some 20 percent of the electorate. Some of the right-wing parties waged overtly anti-Arab campaigns, and Netanyahu’s Likud provided activists with 1,200 hidden cameras to “monitor” Arab polling stations, which prompted the Central Elections Committee to file a police complaint.

Gantz was touted as a candidate more amenable to reaching an accommodation with the Palestinians, despite having led Israel’s murderous wars against Gaza in 2012 and 2014. But he repeatedly ruled out any political alliance with the two Arab parties, Ra’am-Balad and Hadash-Ta’al, without which he had no chance of forming a stable coalition government.

Both slates had pledged to ensure a Jewish majority in Israel/Palestine—a policy whose logical extension is fascism, xenophobia and apartheid, and whose costs will be borne by both the Palestinian and Jewish working class in the interests of Israel’s corporate elite.

The increasingly corrupt, militaristic and authoritarian character of Israel’s political parties—in a country whose founding was defended with the claim that it would provide a refuge from fascism and anti-Semitism—mirrors similar trends internationally. It demonstrates the bankruptcy and reactionary dead-end of the entire Zionist project.

Almost 40 percent of Israeli voters, without any political vehicle to express their hostility to the political perspective on offer, abstained.