The demonstration, one of the largest since Moreno took office in 2017, was met with brutal repression. The security forces unleashed mounted police, attack dogs and tear gas against the marchers as they came within two blocks of the Plaza de la Independencia, the site of the Carondelet presidential palace, which was ringed by a heavy cordon of police and armed troops. 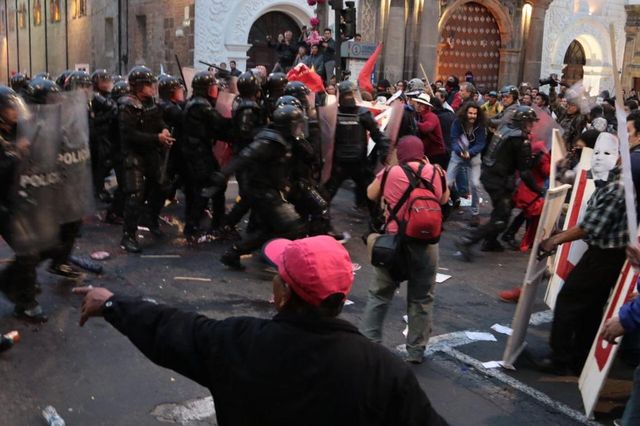 Several people were wounded in the police attack, including two news photographers, and at least six were arrested.

Protesters carried signs demanding “Free Assange,” and many wore Assange masks. Others carried placards with photos and drawings depicting Assange’s cat, mocking the Moreno government, whose ambassador in London had absurdly accused the pet of “spying” on the embassy staff.

The crowds chanted, “Moreno, hypocrite and traitor, the people reject you!”

The trigger for the demonstration, called under the slogan “not one less right” [#niunderechomenos] was the Moreno government’s order to throw open the doors to the London embassy, where Assange had been granted asylum since 2012, to a police snatch squad which dragged him away to a British jail cell. As a result, he now faces the threat of rendition to the US to face trial for daring to publish documents exposing the war crimes and global conspiracies of the US government.

Organizers of the march, which included prominently the party Revolución Ciudadana which supports the former president and Moreno opponent Rafael Correa, said that as many as 20,000 took part in the protest.

Inscribed on the banners carried on the march were slogans denouncing Moreno as a “traitor” and “world disgrace” for his action against Assange.

One prominent banner read, “Assange is an Ecuadorian,” a reference to the citizenship that was granted to the Australian-born journalist in 2017 and summarily and extra-legally stripped from him by the Moreno government in conjunction with handing him over to the British police. Another warned Moreno that “Assange will be your nightmare.” 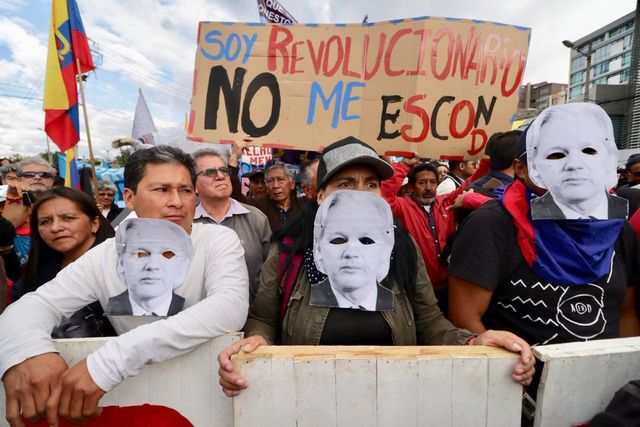 “Assange was the trigger” for the protest, said Edwin Jarrin, the former spokesman for Ecuador’s Council of Citizen Participation and Social Control, who participated in the march, which he said was also an expression of “collective indignation over the attack on basic rights” as well as “mass layoffs” and “neo-liberal policies” of the Moreno government.

As part of a deal signed with the International Monetary Fund (IMF) for $4.5 billion in credits, the Moreno government is implementing a series of “structural adjustment” measures that have included the gutting of labor laws, the layoffs of over 10,000 public employees, attacks on pensions and sharp cuts to government services.

Moreno served as vice-president under Correa and was his hand-picked successor. While Correa cast himself as part of the “Pink Tide” and “Bolivarian revolution” that saw bourgeois populist nationalist governments take office in Venezuela, Brazil, Argentina and elsewhere, he himself had initiated moves toward rapprochement with Washington as the commodity boom ended. He also took the first measures to silence Assange, cutting off his internet access after the WikiLeaks release of emails exposing the Democratic Party leadership’s attempts to rig the primaries against Bernie Sanders and the closed-door speeches given by Hillary Clinton pledging to defend the interests of Wall Street.

Once in office, Moreno violently accelerated this turn to the right, with his betrayal of Assange to the British and US authorities culminating an ever closer embrace of Washington’s foreign policy and its military and intelligence apparatus, which has been invited back into Ecuador.

This right-wing turn, combined with escalating attacks on the rights and social conditions of the Ecuadorian working class, has inevitably given rise to increasingly repressive measures by the Moreno government that are bound up with the case of Julian Assange.

In advance of Tuesday’s march, the Moreno government had sought the arrest of two of its principal organizers, the country’s former foreign minister, Ricardo Patiño, and Virgilio Hernández, a former legislator, on trumped-up charges.

It has also jailed Ola Bini, a Swedish citizen residing in Ecuador, who was arrested on charges of hacking public and private phones and social media accounts on the sole evidence that he was a friend of Assange and had visited him on a number of occasions at the Ecuadorian embassy in London.

Bini, who has resided in Ecuador for five years, was working for a Quito-based center that specialized in internet security, encryption and the expansion of free software.

His parents, who arrived in Quito on Monday, issued a public statement insisting that their son “is innocent of what they have accused him; our son has not attacked the safety of any system, private or public.” They told the media that friends of their son all over the world were concerned over his arrest in Ecuador, and that they had come to “bring him home.”

The frame-up of Bini is bound up with the Moreno government’s retaliation against the exposure of the president’s and his family’s involvement in a massive corruption scandal involving the funneling of millions of dollars in bribe money from a Chinese construction contractor into an offshore shell company named after the president’s three daughters.

The publication of the so-called INA papers exposing this corruption was widely reported and prompted the initiation of a congressional investigation in Ecuador before WikiLeaks called attention to the scandal on its Twitter account last month. The Moreno government seized on the tweet to accuse WikiLeaks and Julian Assange personally—despite the intense surveillance and conditions approaching that of solitary confinement in the London embassy—of having hacked the phones and social media accounts of Moreno and his family to secure the evidence of corruption.

Moreno cast himself as a victim of an invasion of privacy, expressing his ire over the publication of personal photographs, including one of himself eating a lobster dinner in bed at the same time that his government was ordering massive layoffs and austerity measures.

During his trip to Washington this week in the immediate aftermath of the handing over of Assange to the British police, Moreno participated in a public forum at the Inter-American Dialogue, a big-business-controlled Washington think tank, where he repeated his claim that he was justified in inviting the British police to drag Assange out of Ecuador’s London embassy because he had turned the diplomatic facility into a “center of espionage.”

This ridiculous claim, under conditions in which Assange was himself subjected to 24/7 surveillance, dovetails with the position of the Trump administration, put forward by former CIA director and current Secretary of State Mike Pompeo, that WikiLeaks constitutes a “non-state hostile intelligence service” and is designed to facilitate his prosecution in the US under the Espionage Act.

While Moreno is claiming overwhelming popular support for his betrayal of Assange, the mass protest in Quito expressed broad sentiments of support for the courageous journalist and the anger of millions of Ecuadorians that their government has become a pawn of US imperialist interests, prepared to carry out the filthiest betrayal in return for potential debt relief and trade deals. 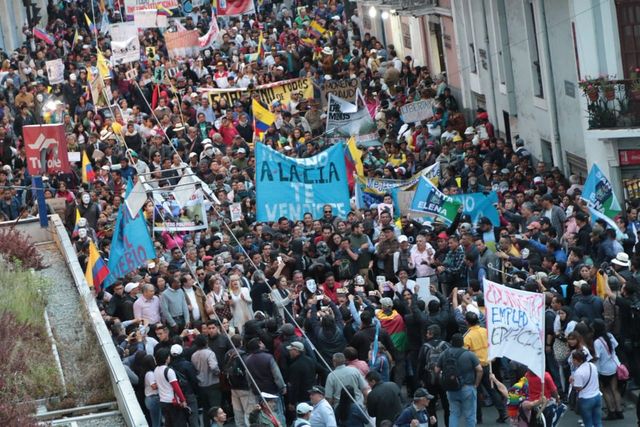 The thousands who marched in Quito on Tuesday speak for millions of workers and youth all over the world who feel disgust and outrage over the jailing of Julian Assange in the UK and the threat that the Trump administration will illegally seize the WikiLeaks founder and subject him to detention, possible torture and even death for exposing the war crimes and diplomatic conspiracies of the US government.

The resurgence of the struggles of the working class on a worldwide scale is the foundation for the mobilization of mass support for the defense of democratic rights and the freeing of Julian Assange, Chelsea Manning and others jailed for exposing and opposing the crimes of imperialism.