New study documents over 1,600 killed in US siege of Raqqa, Syria

“Indiscriminate” US air strikes and artillery bombardment of the Syrian city of Raqqa between June and October of 2017 claimed the lives of at least 1,600 civilians according to a comprehensive new report issued jointly by the human rights group Amnesty International and the conflict monitoring organization Airwars.

The real death toll is unquestionably far higher—reports from Raqqa residents place it at over 3,000. The 1,600 figure provided by Amnesty and Airwars is based upon extensive corroborating evidence, including the naming of 1,000 of the victims and Amnesty’s verification of the deaths of 641 of these named casualties during two months of investigation and interviews on the ground in Raqqa. 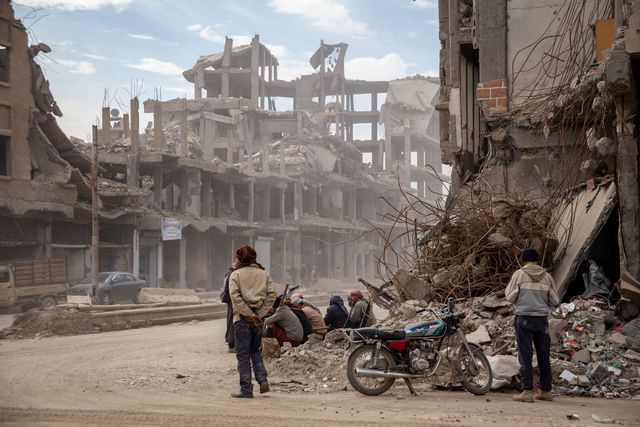 Thus far, the US-led “coalition” that has carried out the nearly five-year-long war in Iraq and Syria in the name of combating the Islamic State (ISIS) has admitted to killing just 159 civilians in the four-month siege of Raqqa—less than one-tenth the number of fatalities verified by the new report.

The Pentagon’s figure is ludicrous on its face. The city was subjected to a relentless bombardment that left at least 11,218 buildings destroyed, over 70 percent of the city in ruins. Both ISIS, and more decisively, the US bombing campaign, cut off escape routes for civilians trying to flee the carnage.

The campaign recalls nothing so much as the infamous statement of a Vietnam War-era US officer that “It became necessary to destroy the town to save it.” In this case, however, it was a city inhabited since remote antiquity, with a population of over 220,000 before the onset of the US-orchestrated war for regime change in Syria.

In addition to the tens of thousands of munitions dropped on Raqqa by US and allied warplanes, the report cites the boasting of a US military official that US Marine Corps units fired some 30,000 artillery rounds into the city during the siege—the equivalent of one strike every six minutes over the course of four straight months. The rounds fired by the Marines’ 155mm howitzers into Raqqa’s crowded urban neighborhoods have a targeting margin of error of 100 meters, roughly the length of an American football field. The use of such an indiscriminate weapon in a populated city itself constitutes a war crime.

The report includes an interactive web site Rhetoric versus Reality: How the ‘most precise air campaign in history’ left Raqqa the most destroyed city in modern times providing photographs, videos, 360-degree views of the devastation, satellite imagery and gut-wrenching testimony of civilians who survived the US bombardment.

The report quotes Munira Hashish, whose family lived in Dara’iya, a low-income neighborhood in western Raqqa. While the family made repeated attempts to flee the city, it lost 18 members over a two-week period in August 2017. Nine of them were killed in a coalition air strike, seven died trying to flee down a road that had been mined by ISIS and two more were killed in a mortar attack by the US proxy ground troops of the so-called Syrian Democratic Forces (SDF).

“Those who stayed died and those who tried to run away died. We couldn’t afford to pay the smugglers; we were trapped,” Munira Hashish said.

What remained of the family, she said, managed to escape “by walking over the blood of those who were blown up as they tried to flee ahead of us.”

“Planes were bombing and rockets were falling 24 hours a day,” she said. “I saw my son die, burnt in the rubble in front of me. I’ve lost everyone who was dear to me. My four children, my husband, my mother, my sister, my whole family. Wasn’t the goal to free the civilians? They were supposed to save us, to save our children.”

Taha Mohammed Othman recounted arriving at the scene of a June 28, 2017 airstrike that destroyed his family’s apartment building, where they had sought to hide in the basement from unrelenting shelling:

“The first thing that I saw when I went to the collapsed building was my brother—Mohammed Mahmoud Othman [50]. He was dead. Then I saw his son, 17-year-old Mahmoud, trapped under a pillar. We tried but we couldn’t drag the pillar off him. Then I saw his 12-year-old brother Anas, who was dead. I couldn’t see their sister Amal, 13, but I could hear her. My brother’s wife Fatima was in there as well. I didn’t see her but later we dug out her body and buried her.”

In the crowded central Raqqa neighborhood of Harat al-Badu, Mohammed told Amnesty investigators how an October 3, 2017 airstrike wiped out his entire family. The attack came in the final days of the siege, after the US military and the SDF had already reached a deal with ISIS allowing 4,000 of its fighters and family members to flee the city. Mohammed lost his wife Aya and their two young daughters, as well as his father and mother, his sister, her husband and their four children.

“I was with my family less than two hours before the strike,” he said. “We were all sheltering in the same apartment—but I left to help an injured neighbor. At about 10.30 other neighbors came to inform me that my entire family had been killed. I ran to the building and found it collapsed. Almost everyone was dead; only my brother was still alive—the explosion had thrown him across the road.

“My neighbors and I dug in the rubble with our bare hands. We had no tools. I found my daughters’ bodies—Rimas and Kafah. Kafah was only 11 days old. I buried them in a nearby house. My brother was left paralyzed. A year has passed but I have not been able to get a wheelchair for him. I have asked many organizations, but none has helped. My brother remains confined to bed.”

Ahmad, a resident of the Darai’ya neighborhood of Raqqa described the terror of a June 10, 2017 US artillery bombardment:

“The first artillery shell landed right behind the house where I was. Instinctively I fled across the road to the home of another relative, but the next shell struck that house, killing Mahmoud and his grandson; more shells hit other houses nearby. One killed two women and two children; another killed Ibrahim, his baby son, and his friend Rahmoun; another killed Hisham, and another still killed the daughters of Hsein Kenjo. It all happened in the space of a few minutes. The shells struck one after the other. It was indescribable, it was like the end of the world—the noise, people screaming. If I live 100 years I won’t forget this carnage.”

Among the survivors of this attack was 11-year-old Fatima Hussein Ahmad, who described how she lost her mother, Aziza, and her three younger sisters in the artillery barrage that morning. “I was thrown over there by the explosion,” she told Amnesty International. She lost her right leg and her left leg was badly injured and she still cannot stand on it, almost two years later. She uses a wheelchair donated by an NGO to get around and her only wish is to go to school, a wish that is denied to most of Raqqa’s children, with the majority of the city’s schools destroyed.

A spokesman for the US-led “coalition” insisted that the testimony of the survivors of the attack was “non-credible” and that “there is insufficient evidence to find that civilians were harmed in this strike.”

An equally horrific artillery strike took place in the same neighborhood a month later, on July 16, 2017, killing five women, six children and one man, with the youngest victim seven months old and the oldest 55. A man who lost his wife and three daughters in the attack—with two other children, ages six and 10 suffering terrible injuries—told Amnesty that there was no way to get away from the shelling.

“With all due respect, how did they know who they were hitting? They don’t even know our neighborhood or the people they hit and killed,” he said.

Amnesty and Airwars called upon the Pentagon and its anti-ISIS “coalition” to “end their denial about the shocking scale of civilian deaths and destruction caused by their offensive in Raqqa.” They appealed for “transparency” and for the US military to establish “an independent, impartial mechanism to investigate all reports of civilian harm, including violations of international humanitarian law, and make the findings public.”

That these appeals will fall on deaf ears goes without saying. The cover-ups and lies about what the former US defense secretary, Gen. James Mattis, described as a war of “annihilation” extend well beyond Raqqa. In Mosul, once a city of two million in Iraq, the devastation was equal if not greater, with an estimate by Iraqi Kurdish intelligence putting the number of civilian victims as high as 40,000.

The lies extend not only to the scale of the carnage unleashed by US imperialism in its latest Middle East war, but also its purpose. Washington’s strategic aim has never been that of “annihilating ISIS,” itself the product of the 2003 US invasion and occupation of Iraq, followed by Washington’s utilization of Islamist fighters as proxy ground forces in the regime-change wars in both Libya and Syria.

Rather than fighting “terrorism,” US imperialism’s central strategic objectives remain what they have been for decades: consolidating US hegemony over the oil-rich Middle East and preparing for war against the principal obstacles to this goal, Iran, Russia and China.

These predatory aims are the source of war crimes that over the past quarter century have claimed “collateral damage” that includes the lives of millions of Iraqi, Libyan, Syrian and Yemeni civilians.

It is certain that the devastating report issued by Amnesty and Airwars will be essentially ignored by the same US corporate media that churned out endless propaganda for a “humanitarian” war to oust the Syrian government of President Bashar al-Assad. A similar silence will inevitably be observed by the various pseudo-left organizations that portrayed the CIA-orchestrated war in Syria as a “revolution”, while demanding a far more aggressive US intervention.