UK: Liverpool man dies after being declared fit for work and denied benefits

Stephen Smith, 64, died in an emaciated state on April 15. The last years of his life were marred by serious ill health, made worse by the punitive actions of the Department for Work and Pensions (DWP) who denied him Employment Support Allowance (ESA) and declared him “fit for work.”

Smith’s ailments included chronic obstructive pulmonary disease, osteoarthritis and an enlarged prostate. He also had a colostomy bag. He had recently been in hospital with a bout of pneumonia, which may have led to his death. His chronic ill-health meant that his weight had dropped to six stones (84 lbs./38 kgs.) and he feared for his life.

Smith had worked all his life, until his health deteriorated in 2006/2007. He was employed as a plumber and then ran a shop repairing fridges and washing machines. Well-known and respected locally, he never married but had family in the area. He was admitted to hospital last Christmas because of deteriorating health. 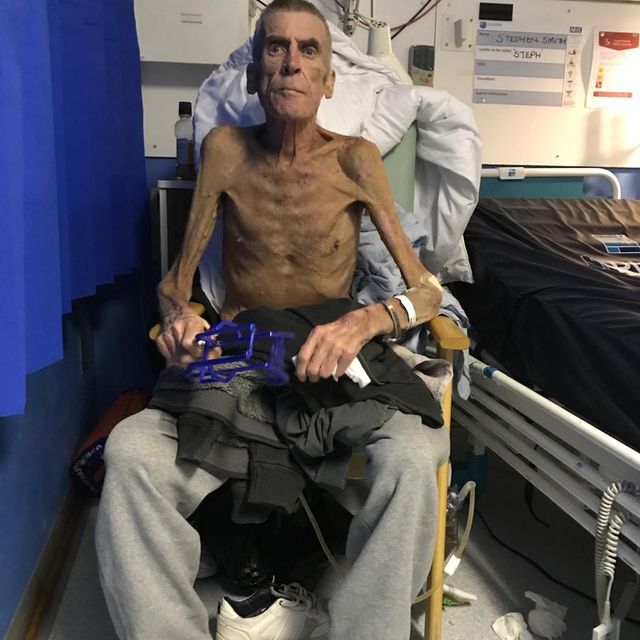 Despite his long-term chronic health problems, Smith failed a DWP Work Capability Assessment (WCA) in March 2017. Failure meant he lost his right to ESA and instead had to sign on each week as available for work to receive Job Seeker’s Allowance of just £67 a week. JSA requires claimants to prove they are actively seeking work.

Photos of Smith published in the Liverpool Echo at the time he was refused ESA are heart-breaking and caused widespread outrage. The DWP dismissed letters from two doctors who had written in Smith’s support. They stated that because of his chronic illness, he was unable to walk 20 metres without getting exhausted and being in pain.

Speaking to the media in February, Smith explained that he struggled to survive at home: “I could only make it to the kitchen to make food once a day. I had no muscles in the back of my leg, which meant I couldn’t stand up at all, and had to lean or sit down all the time, but they were telling me I was fit for work.”

At a tribunal held in January this year, the DWP decision was overturned as the judge could clearly see Smith not capable of working. His ESA was restored and more than £4,000 awarded in back payments for benefits denied over the course of more than a year. Smith had to sign himself out of the hospital to attend the hearings.

In a cruel irony, the £4,000 back payment will be used to pay for his funeral.

After he had struggled for many months, Smith had turned to the Community Advice Service Association (CASA).

The CASA was set up at the end of an 850-day strike in 1998 by sacked dockers to give advice and assist anyone suffering poverty.

The WSWS spoke to Terry Craven, who works at CASA advising people on benefit claims and their rights. He described Smith’s first attempt to appeal against the March 2017 decision to remove ESA: “All that stress for someone already living in poverty, when the health care professional scored Smith it meant he was fit for work.

“He went on his Zimmer frame … he was obviously struggling to breathe. He went to the assessment alone. Like lambs to the slaughter … he should never have been found fit for work in a million years. But once the decision is made, that’s it. The Independent Assessment Service—There’s no comeback with them … they are getting seven out of ten assessments incorrect.”

Craven said he went to see Smith after he was admitted to hospital on December 21 last year. He represented him at the tribunal in January.

At the tribunal hearing a doctor acting for the DWP referred to medical notes on Smith from 20 years ago. The doctor claimed Smith was a heavy drinker, which Smith denied. “All of a sudden I realised they may not have read the papers properly … The qualification for ESA and to get into the support group—is that you unable to walk 50 metres without pain, breathlessness, etc.”

Smith was awarded Personal Independence Payment (PIP) in September 2017. PIP is paid to people with poor mobility because of illness or disability. To qualify for PIP a claimant has to show they cannot walk 20 metres without pain, etc. As Smith had qualified for PIP, the DWP could not argue he could walk 50 metres and conceded that his ESA must be restored.

“We had started to put a case together with a solicitor with a view to suing the DWP and or the Independent Assessment Service (formerly ATOS),” Craven said. “There could be a charge of corporate manslaughter for reason of gross negligence. I just feel so angry that he didn’t even get the benefit of the back-payment.”

Smith’s death shorty after having his right to benefit restored was not the first such case and will not be the last. Jeff Hayward died in June last year aged 52 from a heart attack. Prior to his heart attack, he spent 18 months trying to overturn a decision not to award him ESA in November 2016. This was despite his GP deeming him unfit for work. The ESA health assessor awarded him zero disability points.

With the help of the Ribble Valley Citizens Advice group, Hayward lodged appeals. Following his death, his daughter Holly pursued his case and in January this year the family was paid the backdated entitlement he should have originally been awarded. The medical evidence used to overturn the original decision was that submitted in the original application for ESA.

Analysis of DWP figures in 2015 showed that from December 2011 to February 2014, around 90 people a month had died shortly after being found fit for work after a work capability assessment. WCAs were first brought in by the Labour government in 2007, with its strict criteria tightened by successive governments.

The number of deaths where welfare cuts have contributed was uncovered in a Freedom of Information request from disability campaigner Gail Ward. An article on the Welfare Weekly site noted, “shocking statistics reveal that 111,450 ESA claims were closed following the death of claimants between March 2014 to February 2017.”

While no direct causation can be made between the ending of ESA entitlement and deaths, it noted, “The DWP has since been urged to update these statistics to include individuals who flowed off ESA after being found ‘fit for work’ and who died soon after this time.”

Speaking to Welfare Weekly, Ward said, “The fact the DWP know that disabled people are dying in such large numbers and refuse to adjust policy to reduce the stress on claimants and make sure the right outcome is 100% all the time, and with Universal Credit coming with such strict criteria, doesn’t bode well for the future for the disabled community’.”

The cases cited above give lie to the claim by the Conservative government that the era of austerity is at an end. Austerity is the response of capitalist governments all over the world to make the working class pay for the bailout of the banks and super rich after the 2008 global financial crisis. The tragic death of Stephen Smith confirms that the attack on the right to welfare is a permanent feature of that response.