A packed public meeting in London yesterday, convened by the Socialist Equality Party (UK), issued a powerful call for the mobilisation of the working class in defence of jailed WikiLeaks publisher Julian Assange and courageous whistleblower Chelsea Manning.

Around 150 attended and many more watched a livestream of the event on the SEP’s Facebook channel. The event was also broadcast live on the YouTube channel of independent journalist Gordon Dimmack to an audience of several thousand people. 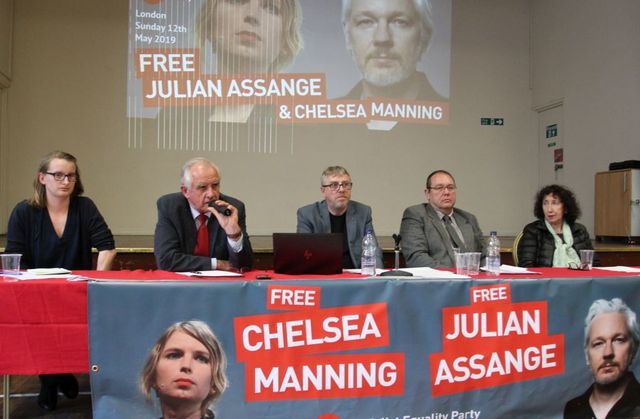 SEP National Secretary Chris Marsden and Uli Rippert, the national secretary of the Sozialistische Gleichheitspartei (SGP-Socialist Equality Party), who travelled to the meeting from Berlin, warned that the criminal methods being employed against Assange exposed the lurch of the imperialist powers to authoritarianism and war.

Oscar Grenfell spoke on behalf of the SEP in Australia and Niles Niemuth from the SEP in the United States. Alice Summers represented the International Youth and Students for Social Equality in the UK.

For the last seven years, Campos and other members of the JADC maintained a vigil outside the Ecuadorian Embassy in London. The vigil continued until the day that Assange was illegally seized, arrested and dragged out of the Embassy by British police on April 11.

Campos said, “For years we stood vigil outside the Ecuadorian Embassy in support of WikiLeaks publisher Julian Assange, witnessing the Embassy siege by the Metropolitan Police… The intention clear, his arrest and silencing, and collecting all information relating to his publishing operation with a view of stopping him.”

She added, “His brutal arrest on the 11th of April intensifies his arbitrary detention further. We must act now, mobilising to free him. He is one of us.”

The audience at the meeting

Rippert explained that the SGP were standing in the European elections and that winning the freedom of Assange and Manning was being made a central issue in the party’s campaign. He said that the freedom of Asange and Manning would be secured on the basis of a mass movement of workers and youth in their defence. He said to applause, "The future is not decided in Westminster. The future is not decided by the Chancellory in Berlin. It's not decided in Brussels and the headquarters of the EU and its definitely not decided in the European Parliament. It's decided by the people who are sitting in this room."

Summers said, “The persecution of the WikiLeaks founder is a concentrated expression of the turn towards authoritarianism and the drive to war by the global capitalist class.”

Grenfell noted that the SEP in Australia had held a number of protests to demand the freedom of Assange and Manning, receiving a powerful response from workers, students and young people. To applause he stated, “We’ve stressed that we are not issuing a plaintive appeal to the Australian government or to any of the official parties. Their participation in the attacks on Assange demonstrates that they are the enemies of democratic rights and of the working class.”

Niemuth said Assange and Manning are “two courageous individuals” who “have the support of workers all over the world which must be organised and developed. They are the targets of an international conspiracy by the ruling elites and a fight to defend them must be based on an international movement of the working class.”

Marsden said that “the Socialist Equality Party views the defence of Julian Assange and Chelsea Manning as the spearhead of an emerging global struggle against imperialism.”

He noted that their arrests and jailing were part of an “eruption of imperialist militarism and break with democratic forms of rule” that, “together with the cultivation of far-right forces, is too fundamental a shift to be explained away as the actions of criminal political elements in the ruling elite such as Trump. They are the malignant symptoms of a global capitalist system that is in terminal crisis.”

Following these speeches, a lively discussion was held with a number of questions put to the speakers and strong contributions made from the floor.

A resolution was unanimously adopted (see full text below) opposing the US extradition proceedings underway against Assange and calling for workers and young people to join the fight for Assange and Manning’s freedom.

The strong turnout in London and determined audience, who listened attentively to contributions for over two hours—defying the lies and smears of the corporate and state media—expresses the growing international support for Assange and Manning.

A full report will be published in the coming days. A video recording of the meeting can be viewed on Gordon Dimmack’s YouTube channel.

The resolution passed at the meeting:

This public meeting in London condemns the arrest, imprisonment and US extradition proceedings against WikiLeaks founder, publisher and journalist Julian Assange. We demand the immediate and unconditional release of Assange and courageous whistleblower Chelsea Manning.

Assange and Manning have been targeted for exposing war crimes, corporate and state corruption and anti-democratic conspiracies that have cost more than one million lives in Iraq and Afghanistan alone. The state persecution of Assange and Manning for publishing true information to the world’s people is the political crime of the 21st century.