Questcor Pharmaceuticals and Mallinckrodt: Financial parasitism and the US pharmaceutical industry

According to a recently unsealed lawsuit filed by whistleblowers, Questcor Pharmaceuticals, now owned by Mallinckrodt, allegedly bribed doctors to increase the sales of its H.P. Acthar Gel, an anti-inflammatory drug that until recently was primarily used to treat babies with infantile spasms.

Questcor, and later Mallinckrodt, has come under intense criticism for raising the price of Acthar Gel by over 97,000 percent over the past 18 years.

Questcor did not spend millions of dollars researching and developing Acthar Gel—the catch-all rationalization used by the pharmaceutical industry to justify its price-gouging practices—but instead acquired the drug from another company, dramatically hiked the price, and then fought off potential generic competitors and aggressively marketed the drug to drive up sales. Mallinckrodt, which purchased Questcor for $5.6 billion in 2014 solely to acquire Acthar, continued this basic strategy. 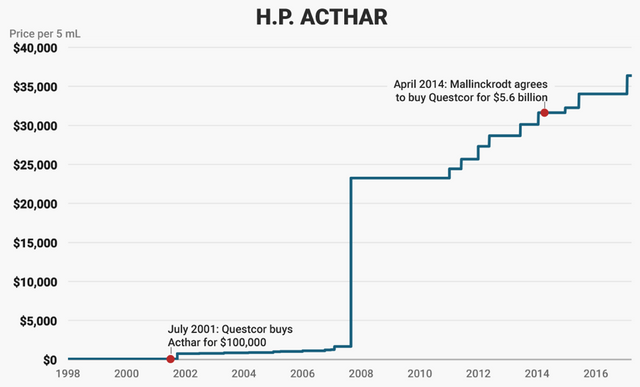 Price hikes of Acthar drug by Questcor and Mallinckrodt

The Justice Department intervened in the lawsuit after conducting its own investigation and finding the whistleblower claims to be credible, leading a federal court to release the complaint on March 6.

According to CNN, the lawsuit claims that Questcor “has cheated the federal government out of millions of dollars that should not have been paid, thereby enriching [the company] and subjecting patients to unapproved, unsafe and potentially ineffective uses of H.P. Acthar Gel.”

“Questcor has attempted to conceal and cover-up its payment of kickbacks and its illegal promotion of H.P. Acthar Gel by making false statements to the FDA and directing employees to conceal evidence,” the lawsuit says.

These illegal practices by Questcor began in 2007 and “have knowingly been continued since the merger and acquisition of Questcor by Mallinckrodt.”

The business strategy of Questcor and Mallinckrodt reflects the increasingly parasitic and predatory nature of the pharmaceutical industry under the pressure of finance capital and highlights the irrationalities of drug development and medical care under the capitalist profit system.

Acquiring an old drug and raising the price

While Turing Pharmaceuticals and Valeant Pharmaceuticals have come under scrutiny in recent years for acquiring old drugs and then dramatically hiking the price, they were simply following a path forged by Questcor and Mallinckrodt.

The active ingredient of Acthar Gel, adrenocorticotrophic hormone (ACTH), was first obtained from the pituitary glands of pigs by a division of Armour and Company in 1948. Acthar Gel, a purified form of ACTH mixed with gelatin to provide an extended release of the drug after injection, received approval by the Food and Drug Administration (FDA) in 1952. Doctors began using Acthar off-label (uses not approved by the FDA) to treat infantile spasms in 1958.

The product was eventually acquired by Rhone-Poulenc, which—through a series of mergers and acquisitions—became Aventis and then Sanofi.

In 2001, Questcor Pharmaceuticals, an Anaheim, California-based company founded in 1990, purchased the rights to Acthar from Sanofi for $100,000.

Critical to Questcor’s strategy was maintaining its monopoly hold on the drug while jacking up the price. Although the patent on the drug had expired, a proprietary and complex manufacturing process kept most potential generic competitors at bay.

Still, there did exist a competing product, Synacthen Depot, which was much cheaper than Acthar. Questcor purchased the US rights to Synacthen in 2013 from Novartis AG to ensure that competing companies didn’t acquire and sell the drug at a lower price. In 2017, Mallinckrodt reached a $100 million settlement with the Federal Trade Commission for its anti-trust law violations. As part of the settlement, Mallinckrodt agreed to sell the rights to Synacthen to another company, but it did not admit guilt.

Early on, Questcor came to terms with the reality that doctors generally limited Acthar’s use to infantile spasms. After Mallinckrodt acquired Questcor, however, it pushed the drug into other areas—including rheumatology, pulmonology, ophthalmology, dermatology and kidney disease—where there was little evidence to support the drug’s use and cheaper alternatives were available.

Mallinckrodt states that the company has conducted additional research on the drug, but these trials have been relatively small in size, few in number and riddled with conflicts of interest.

In a 2017 editorial in JAMA Internal Medicine, Saate Shakil and Rita F. Redberg, both from the Department of Medicine at the University of California, San Francisco, reviewed the clinical trial evidence for Acthar gel.

“The lack of high-quality evidence supporting Acthar gel’s benefit in a variety of conditions,” Shakil and Redberg conclude, “along with the unconscionable price increase by the manufacturer, should give pause to all practitioners.”

How would Mallinckrodt convince doctors to prescribe a treatment for which there was little evidence to support its use and when there were readily available cheaper alternatives? As the whistleblower case reveals, the company did so by allegedly bribing doctors and even their staffs.

The lawsuit claims that the company, among other illegal activities, violated the federal Anti-Kickback Statute by bribing doctors, promoted Acthar for off-label uses and caused false claims to be submitted for reimbursement by federal healthcare programs.

Starting with Questcor and continuing on at Mallinckrodt, the lawsuit claims that the bonuses for sales representatives were designed to promote a “sell at all cost” mentality.

When the company ran into resistance from doctors treating multiple sclerosis (MS) patients because there already existed a cheaper alternative, it turned to bribing doctors to get them to change their prescribing behavior. When MS doctors refused to meet with Questcor sales representatives, the company resorted to bribing office staff to schedule the meetings anyway.

The strategy paid off, as a relatively small group of doctors increased their prescriptions of Acthar. An investigation conducted by CNN last year looking at Medicare Part D claims found that the number of claims for Acthar rose from 1,471 in 2011, to 12,867 in 2016. Over this five-year period, Acthar claims cost the Medicare program nearly $2 billion.

The CNN investigation found that more than 80 percent of the doctors who filed Medicare claims for Acthar in 2016 received compensation from Mallinckrodt for consulting, speaking and other services. Between 2013 and 2016, Questcor and then Mallinckrodt paid 288 prescribers $6.5 million.

The CNN investigation followed the publication of a 2018 research article in JAMA Network Open that conducted a cross-sectional study of 235 specialist physicians who frequently prescribed Acthar. It found that 88 percent of these specialists received compensation from Mallinckrodt in 2015.

The researchers found that every $10,000 paid to doctors by Mallinckrodt corresponded to a $53,000 increase in Medicare spending on Acthar, a 5:1 return on investment.

At the same time that Mallinckrodt is fleecing taxpayers and driving up health care costs, it has gone to great lengths to avoid paying US taxes. Founded in 1867 in St. Louis, Missouri as a chemical processing firm, the company remains based in St. Louis, but headquartered itself in Ireland for tax purposes after it executed a corporate tax inversion in 2013. The tax inversion freed up money for Mallinckrodt to merge with and acquire other companies, including its purchase of Questcor in 2014.

Mallinckrodt contributes to the opioid epidemic

Although Acthar is Mallinckrodt’s primary moneymaker, the company is also one of the country’s largest manufacturers of the opioid painkiller oxycodone. Like a number of other drug companies and drug distributors, Mallinckrodt flooded communities with opioid painkillers and ignored laws designed to prevent diversion to the black market.

Federal law requires drugmakers to monitor opioid sales and report any suspicious orders to the Drug Enforcement Agency (DEA), but Mallinckrodt failed to conduct due diligence as long as the money continued to pour in, according to a 2017 report in the Washington Post .

The DEA began investigating the company in 2011 after discovering diversionary activities among some of the drug wholesalers to whom Mallinckrodt was selling painkillers. In 2010, for example, the drug distributor KeySource Medical shipped 41 million tablets of Mallinckrodt’s oxycodone to Florida.

Ultimately, Mallinckrodt shipped 500 million pills to Florida, 66 percent of all oxycodone sold in the state, between 2008 and 2012—enough painkillers to provide every man, woman and child in the state with 6 pills every year.

So many of Mallinckrodt’s 30-milligram oxycodone tablets flowed into Florida that drug dealers and users began referring to them as “M’s” because of the company’s logo on the pills.

Mallinckrodt continued to ship painkillers even after the DEA informed them of abuses by particular wholesalers. In total, federal prosecutors discovered 43,991 suspicious orders from drug distributors that Mallinckrodt should have reported and which could have resulted in fines as high as $2.3 billion.

When prosecutors put forward their settlement offer in 2015, however, instead of pursuing billions in fines, they proposed a $70 million fine that was eventually whittled down to $35 million, citing “litigation risk” if the case were to go to trial.

For a company that in 2016 had $3.4 billion in revenue and $489 million in profit, the fine was insignificant. As one government official told the Post, this was “chump change.”

The entire pharmaceutical industry is beset by the same irrationalities and parasitic behaviors, but companies like Mallinckrodt, Turing, Valeant and Marathon Pharmaceuticals—an Illinois-based company that raised the price of its muscular dystrophy drug by 6,000 percent—provide its most vulgar expression. They operate, as Marx put it, where “money, filth and blood comingle.”

In response to the widely publicized outrages committed by these companies, the industry’s trade group, the Pharmaceutical Research and Manufacturers of America (PhRMA), kicked out Mallinckrodt and Marathon Pharmaceuticals in 2017 and updated its rules to require companies to spend at least 10 percent of global sales on research and development.

This was purely a cynical public relations exercise. Under the pressure of finance capital, the pharmaceutical companies represented by the trade group are engaged in similar parasitic behavior, focusing on increasing the wealth of shareholders with only minimal investments in research and development.

For example, the 18 drug companies on the S&P 500 index spent $516 billion on buybacks and dividends between 2006 and 2015, 11 percent more than they spent on research and development, according to a 2017 study by the Institute for New Economic Thinking.

The life-and-death tasks of curing disease and advancing medical care cannot be left in the hands of profit-hungry corporations and the banks that finance them. The pharmaceutical industry must be nationalized, transformed into public utilities, on the basis of a larger socialist transformation of the economy.

Financial parasitism and the stock market surge
[9 May 2019]