Report highlights mistreatment of refugee children in US internment camps

A report this week by the Associated Press (AP) on conditions facing children at a Border Patrol station near El Paso, Texas, highlights the inhuman treatment of children under the Trump Administration’s savage anti-immigrant campaign.

The AP, in an account that has not been widely reported elsewhere in the media, describes young teenage girls taking responsibility for caring for toddlers and infants who have been separated from their parents under the government’s drive to penalize undocumented immigrants fleeing the poverty and violence that have been stoked by American imperialism in their home countries. 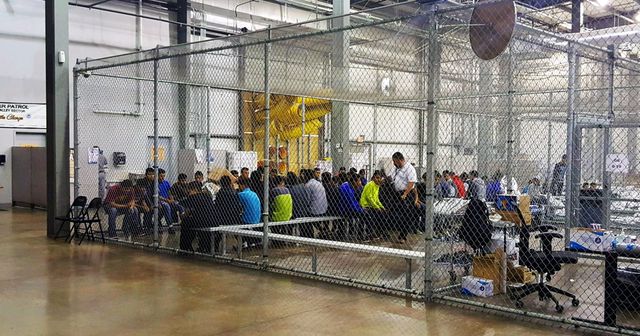 The legal team that spoke to the AP gained access to the facility in Clint, Texas, about 25 miles southeast of El Paso, after negotiations with federal officials. The lawyers interviewed 60 children, out of the total of 250 infants, children and teenagers at the station. They reported inadequate food, water and sanitation, amid other neglect of the most basic needs of toddlers and children less than one year old.

The detention camp includes six children three years of age and younger, including three infants. There were many examples of children taking care of children. One girl explained, “A Border Patrol agent came in our room with a 2-year-old boy and asked us, ‘Who wants to take care of this little boy?’”

A 14-year-old girl from Guatemala who had been holding two smaller children in her lap told the lawyers, according to the AP report, “I need comfort too. I am bigger than they are, but I am a child, too.”

A father who is a US resident said that authorities had separated his daughter, who would be in second grade in a US school, from her aunt when they entered the country. He only found out where his daughter was when an attorney visiting the camp found his phone number written on a bracelet the little girl was wearing. “She’s suffering very much because she’s never been alone,” the father explained.

The children at the Texas camp, held in conditions that undoubtedly prevail in hundreds of other facilities run by the federal government, are fed oatmeal, a cookie and sweetened drink for breakfast, instant noodles for lunch, and a burrito for dinner. They have had no fruits or vegetables, nor have they had a clean change of clothes or the opportunity to bathe for weeks.

The AP spoke to some of the lawyers as well as others involved in the struggle to defend immigrants.

Warren Binford, director of the Clinical Law Program at Willamette University, reported that some of the children “are so tired they have been falling asleep on chairs and at the conference table.” Holly Cooper, a director of the University of California, Davis, Immigrant Law Clinic, said, “In my 22 years of doing visits with children in detention, I have never heard of this level of inhumanity.” Gilbert Kliman, a San Francisco psychoanalyst who has experience with families with children seeking asylum, noted, “The care of children by children constitutes a betrayal of adult responsibility, governmental responsibility.” Kliman said the current conditions would have lasting impact and psychological damage on the children.

Meanwhile, in a courtroom in San Francisco, the Trump administration argued that the “safe and sanitary” conditions mandated for migrant children by a 1985 class action lawsuit that was filed during the Reagan presidency do not require that soap and toothbrushes be provided, and also that sleeping on cold concrete floors in cells with low temperatures similarly qualifies as “safe and sanitary.” The court hearing, reported by Newsweek, was part of a federal appeal of a lower court ruling against the Trump administration.

Department of Justice lawyer Sarah Fabian, the Trump administration’s representative in the case, insisted that the above conditions do not violate the terms of the 1985 agreement. “One has to assume it was left that way and not enumerated by the parties because either the parties couldn’t reach agreement on how to enumerate that or it was left to the agencies to determine,” Fabian coldly argued.

Several justices of the 9th Circuit of the US Court of Appeals registered their concern. “You’re really going to stand up and tell us that being able to sleep isn’t a question of safe and sanitary conditions?” Judge Marsha Berzon asked. Judge William Fletcher added, “Are you arguing seriously that you do not read the agreement as requiring you to do anything other than what I just described: cold all night long, lights on all night long, sleeping on concrete and you’ve got an aluminum foil blanket?”

The federal onslaught on the elementary rights of asylum seekers and other migrants began long before the current administration, although Trump has escalated the attacks and used them to whip his fascistic base into a frenzy, as seen most recently in his 2020 reelection campaign kickoff in Orlando, Florida.

Immigration and Customs Enforcement (ICE) has just announced plans to reopen the internment camp at Fort Sill in Oklahoma that was used to house Japanese-Americans rounded up by the administration of Franklin Roosevelt during the Second World War. The new concentration camp will be used to detain 1,400 children. Without even the excuse—as yet—of a shooting war, the government in Washington is stepping up its criminalization of working class immigrants.

The Democrats are mostly silent on the latest outrages, and in some cases they have joined in the campaign, quarreling at most with Trump’s way of going about “border security.” It was the Obama administration that deported a record 3 million undocumented immigrants during his eight years in office, providing Trump with a baseline from which he could intensify the attacks. This past week the president tweeted his latest threat to round up “millions,” beginning with the one million immigrants who are subject to removal orders—an action that would have devastating consequences not only for these families but for the cities and communities in which they live and work. Plans were announced for raids to begin across the country as soon as Sunday.

The record of both big business parties demonstrates the irrefutable truth that no section of the working class can defend its interests except through a break from these representatives of the ruling elite and a united struggle for the socialist reorganization of society. Native-born workers must come to the defense of their immigrant brothers and sisters, whether documented or not. The mass mobilization of the working class, through protests, mass demonstrations and strikes, will be necessary to stop the bipartisan attack on immigrants. This must be part of a political struggle for a socialist workers’ government that will tear down the artificial national boundaries and extend its hand in friendship to workers all over the world.