John Pilger warns: “Do not forget Assange. Or you will lose him”

John Pilger issued a warning on Wednesday that people “must not forget Julian Assange” or they will “lose him.” The world-renowned investigative journalist outlined the WikiLeaks founder’s deteriorating health, and the draconian conditions in which he has been held in London’s Belmarsh Prison, since being illegally arrested by British police on April 11. 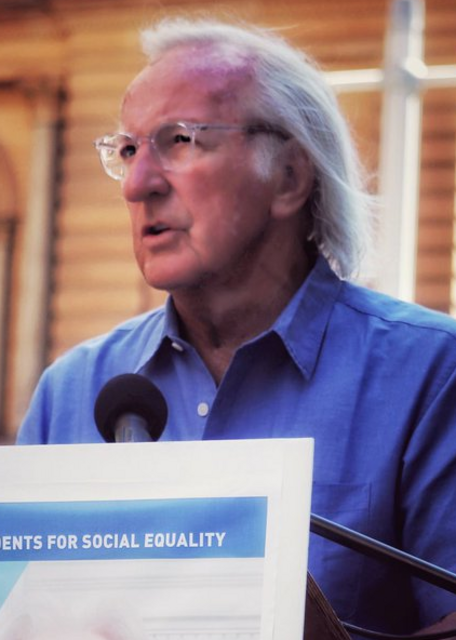 In a tweet that has been shared more than 10,000 times, Pilger wrote: “Do not forget Julian #Assange. Or you will lose him. I saw him in Belmarsh prison and his health has deteriorated. Treated worse than a murderer, he is isolated, medicated and denied the tools to fight the bogus charges of a US extradition. I now fear for him. Do not forget him.”

She indicted those responsible for the “slow murder” of Assange, including the US, British, Swedish and Ecuadorian governments, and the corporate media. She also condemned the Australian government for refusing to defend her son.

Pilger’s post is the latest public indication of the immense physical and psychological damage inflicted on Assange by his decade-long political persecution.

Last week, Jennifer Robinson, one of Assange’s lawyers, confirmed that her client remained in the hospital wing of Belmarsh, where he was transferred in late May. She was “very afraid” for Assange’s health. He had likely suffered “permanent damage” as a result of his seven years of arbitrary detention in Ecuador’s London embassy.

When Assange was first transferred to the prison medical wing, WikiLeaks issued a statement explaining that during the first seven weeks of his incarceration in Belmarsh, his health had “deteriorated” and he had “dramatically lost weight.”

The British authorities have refused to ease Assange’s conditions, despite his health issues. This is in line with the British government’s attempts to facilitate the WikiLeaks founder’s extradition to the US, where he faces the prospect of life imprisonment, or worse, for his role in exposing American war crimes, mass surveillance operations and global diplomatic conspiracies.

The British government rejected, out of hand, a report in May by UN Special Rapporteur on Torture Nils Melzer, which found that Assange had been subjected to “psychological torture.” Melzer pointed to the responsibility of the British authorities, who enforced Assange’s confinement in the Ecuadorian embassy, by threatening to arrest him if he left the small building.

In a letter to the British government in May, publicly released earlier this month, Melzer outlined the central role of the British state in facilitating Assange’s arbitrary detention and his “public mobbing” by senior politicians and the press.

Melzer said Assange’s rapid weight loss during his incarceration in Belmarsh Prison, and his transfer to the medical wing, confirmed the WikiLeaks founder’s “continued exposure to progressively severe psychological suffering and the ongoing exacerbation of his pre-existing trauma.”

Melzer called for Assange’s 50-week prison sentence, on trumped-up bail charges, to be commuted. He said it was necessary, at the least, for British authorities to provide Assange with “urgent access to a psychiatrist of his choice and confidence, and through urgent relief from his constant exposure to traumatising psychological stress, anxiety and depression.”

Pilger’s tweet also alluded to the role of the British authorities in preventing Assange from preparing a legal defence to the threatened US extradition. Assange has been denied access to a library and computers, and has had limited access to visitors, including lawyers.

Pilger’s statement underscores the criminal role of the corporate media, in facilitating the state persecution of Assange. His tweet was posted a week after an American federal court dismissed “with prejudice” a US Democratic National Committee (DNC) civil lawsuit against Assange.

The presiding judge found there was no evidence of collusion between Assange and Russia. He said WikiLeaks’ 2016 releases, exposing the DNC’s attempts to rig the Democratic Party primaries against self-declared “socialist” Bernie Sanders, along with the publication of Hillary Clinton’s secret Wall Street speeches, were “entitled to the strongest protection that the First Amendment offers.”

Having promoted the lie that Assange is a “Russian agent” for the past three years, corporate outlets, including the New York Times, the Washington Post and every major publication in Australia, either buried the damning ruling or did not mention it at all. The response underlines their function as mouthpieces of the intelligence agencies and governments persecuting Assange.

Pilger’s statement reinforces the urgency of transforming the widespread popular support for Assange into a mass political movement, in Australia and internationally, fighting to prevent his extradition to the US and to secure his complete freedom.