On Tuesday, the San Francisco Unified School District Board of Education (SFUSD) continued its censorship efforts by voting to cover the “Life of Washington” mural at George Washington High School with panels. In the face of widespread popular opposition, the school board felt obliged to amend its June 25 decision to destroy the mural by painting over it.

The 13-panel work shows scenes of the complex social development of the United States, including scenes depicting slavery and the genocide of Native Americans as well as the American Revolution. The artwork was created in 1936 by left-wing Depression-era artist Victor Arnautoff and covers the walls and ceiling of the school entrance. 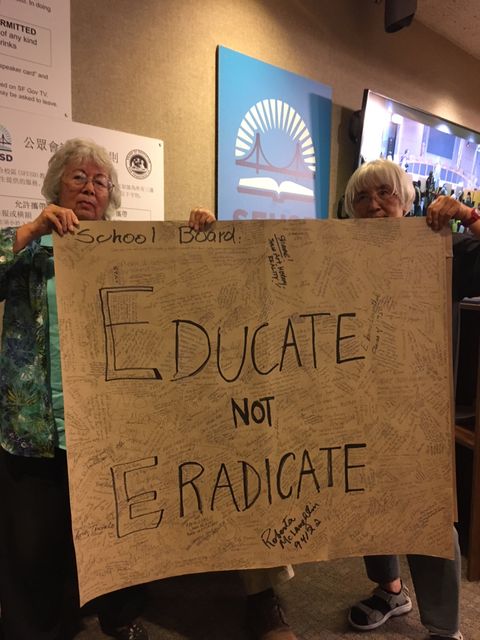 School Board President Stevon Cook and various media outlets have presented Tuesday’s vote as a “compromise.” Cook, in a self-serving SFUSD press release, described the board’s action as an effort to solve “an issue that is dividing our city when we really need to be coming together in service of our students.” He suggested that people on both sides of the issue would be unhappy with the result.

This is pure sophistry. As speakers at the meeting pointed out, the school board is effectively suppressing the “Life of Washington” mural, rendering it inaccessible as a living work of art. If the Nazis had merely hidden away the books they objected to, instead of burning them, would that have fundamentally changed matters? The board’s decision is an act of censorship carried out by reactionary, petty bourgeois elements whose methods and instincts are deeply antidemocratic and authoritarian.

Significantly, a group of San Francisco school bus drivers were on hand at Tuesday’s meeting to express their opposition to the privatization of busing students. Austerity measures, profiteering and censorship go hand in hand.

The board’s “compromise” solution is merely a shabby attempt to quell popular anger that has grown exponentially in the weeks since the vote in June to destroy the murals. As the agenda for Tuesday’s board meeting made clear, “further analysis” suggested “that painting over the mural will result in undue delay in comparison to alternative means of removing the mural from public view,” leading the board to advise covering the artwork with “solid panels or reasonably similar equivalent material.”

For the past several months, SFUSD officials and local activists have used racialist politics to claim the murals upheld a “white supremacist” or “colonizer” narrative of history and were “traumatizing” students because of their depiction of slavery and the genocide of American Indians. On August 1, the school board attempted to keep secret from the public an open house to view the murals for two brief hours at the high school, yet hundreds of supporters showed up to see them. The meeting on Tuesday was again well attended by those opposed to the censorship campaign. 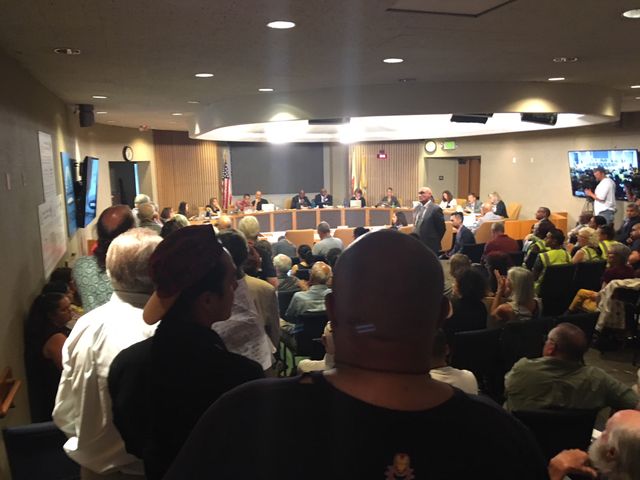 Line of mural supporters and school bus drivers on the right

As the World Socialist Web Site explained in a statement that was distributed at the meeting, “The censorship campaign against the 13-panel mural titled the ‘Life of Washington’ is based on the brand of right-wing politics that promotes race and gender as the fundamental categories of American society in order to obscure the class exploitation that is the driving force of capitalism and the basic source of social inequality and poverty.”

The public meeting room quickly reached capacity as board officials began with a bureaucratically imposed 30-minute public comment window—15 minutes for those in favor of keeping the mural and 15 minutes for those in favor of removing it from public view. This farcical proposal drew opposition from the audience as name after name was called to speak in opposition to the board’s decision to cover over the artwork.

Of the many who lined up in support of the murals, only the first half or so were allowed to speak. As time ran out, supporters of the murals protested the muzzling of discussion by the board, finally prompting school board president Stevon Cook to extend the time for a mere five minutes. When this time period too ended with many still left desiring to speak, supporters of the murals again argued for the right to speak, leading the board to eject one supporter from the meeting and threaten the rest with the same fate. Both WSWS reporters at the meeting had submitted cards to speak but were not allowed.

Opponents of the murals were given their opportunity to speak. However, the clock was paused after each speaker, extending the actual time allotted to approximately 30 minutes. Nearly every opponent of the murals was given a chance to condemn the artwork. Various opponents argued that the murals had to be permanently destroyed or they could possibly be revealed once again in the future. Some contributions came from parents and students at the school repeating prepared statements about “trauma” caused by the murals as students had supposedly been told, “Meet me by the dead Indian.” 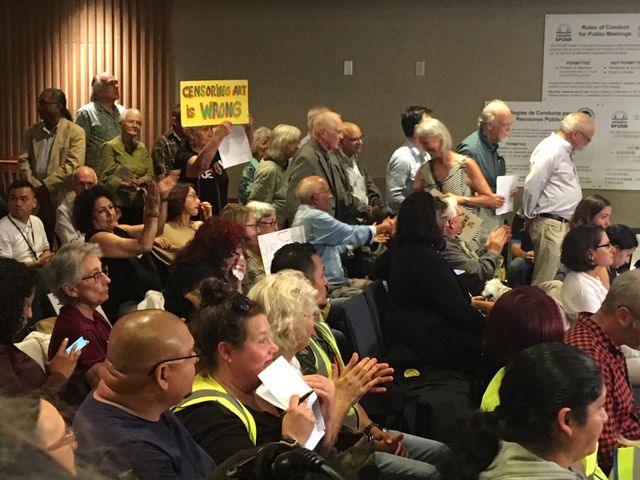 Some of those attacking the murals had statements making use of the SFUSD board’s carefully coded language. They asserted that the issue at hand was not “the content of the artwork but the context” and that the murals “do not reflect SFUSD values.”

One individual, who introduced herself as a former San Francisco high school student, expressed the racialist hysteria that pervades these layers. She asserted that the “fight is not about art it is about the California Education code …This mural does not provide a safe space for students. … It disturbs me to the deepest depths of my soul that we have adults in this room that show zero empathy for black, Native American, and Latino students.” In fact, opposing censorship and attacks on democratic rights is in the interest of every section of the working class, including black, Native American, and Latino youth.

The speaker went on, “For over 50 years, the cries and concerns of the most vulnerable students have been ignored and dismissed … now we have adults that are more concerned for an inanimate object than they have for actual living children of color.” This is demagogic nonsense. There is no indication that wide layers of students are crying out about the murals.

On the contrary, school board president Cook was forced to admit in July that the “preponderance of email we’ve received at this time, indeed, speaks to the desire to keep the mural as is.” He also acknowledged that, as a New York Times column pointed out, “four Washington High freshmen agreed while 45 disagreed with the removal of the mural after being asked to write about the controversy as a class assignment.” The destruction of the murals is popular only with a narrow layer of identity politics zealots.

At the end of public discussion, Board Commissioner Alison Collins used her platform to smear defenders of the Arnautoff murals as allies of the far right. 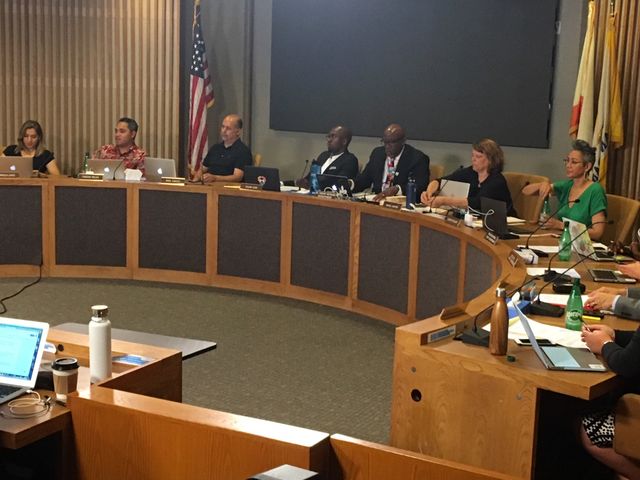 “Just recognize,” Collins argued, “that Tucker Carlson, and Breitbart, and Stormfront, an Alt-Right website banned on Facebook, are all pushing the same false narratives that mural supporters are pushing, that we need to preserve history, that historically marginalized kids need to toughen up, and that students need to be exposed to shame and trauma in order to prevent history from repeating itself.” This is simply foul, McCarthyite slander.

Collins is married to Chris Collins, cofounder of Urban Pacific Development, LLC, which has partnered with multibillion-dollar corporations Hines and Goldman Sachs in various development projects in San Francisco and throughout California. Alison Collins has repeatedly claimed that the murals depict a “white supremacist” narrative and are “racist.” In recent years, she has been an apologist for the charterization of public schools in San Francisco, arguing that the District’s “hands are tied” when the issue has come up for debate in low-income communities. These are sympathies and interests that are clearly of another world from working-class students of all races, including Native American and African American students.

Board president Cook closed the discussion with the statement, “Where we all agree is that the mural depicts the racist history of America, especially in regard to African Americans and Native Americans. It is important that we all share the agreement and acknowledgement of racism, discrimination, and the dehumanizing of people of color and women in American history.”

The school board again unanimously reaffirmed their opposition to the murals on the basis that they “do not reflect SFUSD values” and voted four to three in favor of the new proposal to obscure the murals from view.

As noted, following the discussion and second vote on the murals, a number of school bus drivers, many who attended George Washington High School, addressed the meeting with pleas to preserve their own jobs and student safety going into the new school year in the face of SFUSD proposals to privatize bus service, among other reactionary measures.