Peter Greste’s panel discussion in Sydney: Support for censorship and throwing Assange to the wolves

A panel discussion, on the subject “My Crime is Journalism,” took place on September 1 at the Sydney Opera House. The promotion for the event stated: “Around the world, leaders attack truth through censorship and state control. But even in the face of harsh punishment, journalists are still committed to exposing corruption, documenting abuse and combating misinformation.”

The forum was hosted by Australian journalist Peter Greste, who was imprisoned for 14 months in Egypt from 2013 to 2015 on politically motivated charges of “spreading false news” as a reporter for Al Jazeera. The panel consisted of Steve Coll, a writer for the US New Yorker magazine; Maria Ressa, of the Philippines-based Rappler website; Lina Attalah from the Egyptian publication Mada Masr; and Irina Borogan, deputy editor of the Russian-based Agentura.ru news-hub. 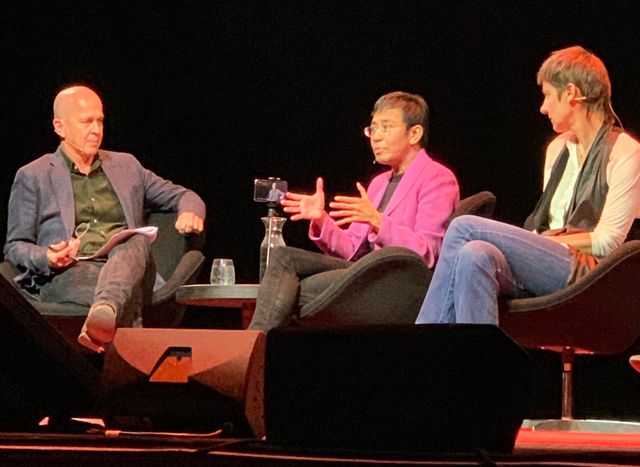 The context of the discussion was the recent police raids on the Australian Broadcasting Corporation (ABC), and News Corp journalist Annika Smethurst, over the publication of whistleblower leaks revealing Australian war crimes in Afghanistan and secret government plans for expanded domestic surveillance. Trials are taking place of a whistleblower and lawyer who revealed that the former Australian government bugged East Timor negotiators in 2004 during fraught talks over the division of energy resources in the Timor Sea.

Internationally, the best-known journalist suffering “harsh punishment” is WikiLeaks publisher Julian Assange. The US is seeking to extradite him on 18 charges, including 17 of espionage, over WikiLeaks’ 2010 publication of leaked documents that exposed war crimes in Afghanistan and Iraq, and diplomatic intrigues around the world. Assange is threatened with up to 175 years’ imprisonment—a life sentence.

Chelsea Manning, who leaked the information that was published by WikiLeaks and major media publications, has been incarcerated until she agrees to falsely testify that Assange “conspired” with her. As well as being deprived of her liberty, she is being bankrupted by a fine of $1,000 for every day she refuses to perjure herself.

The event at the Opera House, however, was not organised to contribute to the defence of Assange, Manning or any other journalist or whistleblower. Instead, it was used by the panelists to appeal to the very state apparatus attacking freedom of speech to put its trust in the major media companies and assist them to maintain profitability by censoring alternative news and opinion being distributed via internet platforms.

Until audience questions were taken at the conclusion of the discussion, Assange’s case was only referenced in passing by Coll, who noted the implications for the official press of a publisher being prosecuted as a “co-conspirator.” Greste immediately shifted the discussion to the “dangerous environment” produced by terrorism, in which “national security” has been declared by governments to be at risk. The state, he implied, has simply gone too far in giving “priority” to security “over journalistic freedom.”

Coll responded with the revealing assessment that the state did not need to target the establishment media. The “press and government had functioned successfully,” he asserted, to censor what the authorities did not want made public. He related how when he was working for the Washington Post during the “war on terror” and the invasions of Afghanistan and Iraq, editors would have “informal discussion” with various state agencies and agree on what information should be “withheld.” This arrangement of self-censorship, he stated, had “operated successfully for 30 to 40 years.”

Maria Ressa, a conservative pro-US publisher who is hostile to WikiLeaks, opined that the problem had been the emergence of alternatives to the establishment press. One of the “great selling points of the internet and social media,” she said, had been that it would “democraticise” the publication of news and opinion. Instead, she asserted, it had enabled people to bypass the mainstream media “gatekeepers,” who “vetted” information before it was published. “We forgot the gatekeepers,” she complained.

Coll agreed, adding that there had been “euphoria” and “utopian thinking” that social media would lead to a more educated populace. The problem, he pontificated, was that “news organisations lost control of the distribution of truth.” The information available on the internet, he said, had “drowned out the media.” In fact, large numbers of people use internet sources because they can access truthful information and critical opinions that they simply do not find in the establishment press.

But, Coll declared, “in Europe they are fighting back.” He did not elaborate, but he could only have been referring to sweeping censorship laws that have been imposed by the European Union on the pretext of protecting copyright, or the even more draconian German laws compelling that “illegal content” be removed or blocked within 24 hours. Internet companies, working hand-in-hand with intelligence and police agencies, have been given unchecked power to decide what is commercially unlawful or political “hate speech” and extremism. It has enabled the wholesale censorship of content that is critical of government policy or exposes corporate abuses.

The European laws followed already pervasive censorship by Google, which since 2017 has rewritten its algorithms to give preferential placement in searches to establishment news and downgrade into virtual obscurity independent and critical sources. Facebook, Twitter and other platforms also engage in flagrant censorship of content on behalf of the ruling class and state apparatus of countries.

It is worth recalling the origins of Google and social media censorship. Much of the establishment media, along with the CIA and other intelligence agencies, asserted that “fake news”—not the objective reality of capitalism in crisis and breakdown—is why the majority of Americans view society as unequal, unjust and undemocratic. The defeat of Hillary Clinton and the victory of Donald Trump in the 2016 presidential election was blamed on “Russian interference,” not the fact that millions of workers refused to vote for either right-wing representative of the billionaire oligarchy.

In that context, it was significant that Peter Greste concluded the discussion by drawing attention to surveys in the US that found people only view politicians with more distrust than the official media. He worryingly asked: “How much is it a problem of our own making?”

The simple explanation is that masses of people view the official media with distrust and contempt because that is all it deserves.

The almost universal propagation by the establishment media of the claims that Iraq was concealing “weapons of mass destruction” has left an enduring legacy. The credibility of the establishment television and newspaper corporations was shattered by their belated admission that they had propagated a tissue of lies to justify an illegal war. It has never really recovered.

Moreover, the discrediting of the official press coincided with the exponential improvement of internet technology and growth in usage. The political implications were demonstrated in 2010–2011. The masses of Tunisia and Egypt, responding in part to exposures published by WikiLeaks, extensively used social media to disseminate news and organise the overthrow of seemingly entrenched US-backed dictatorships. The Tunisian upheaval was nervously described by Newsweek magazine as the “first WikiLeaks revolution.”

Today, in every country, mass movements are developing in the working class against social inequality, authoritarianism and militarism, with revolutionary implications. When Greste, Coll and Ressa et al. talk about restoring the “control” of the corporate media as the “gatekeeper” of information, they are advocating working with the state to suppress independent and critical media, as part of its attempts to head off open challenges to the capitalist oligarchy.

That is why the US, British and Australian ruling classes are so determined to make an example of Assange. And it is why an entire layer of the ex-liberal and ex-left political and media establishment have thrown the WikiLeaks publisher to the wolves. They oppose any journalism that is committed to providing the population with truthful exposures because, in today’s conditions of extreme class antagonisms, it could trigger unpredictable social upheavals.

Peter Greste is one example, though a great deal could also be said about the public hostility conveyed by Coll, Ressa and Borogan toward Assange and WikiLeaks.

In April, just after Assange was dragged by British police from the Ecuadorian embassy in London and incarcerated in the high security Belmarsh Prison, Greste publicly denounced him in a column in the Sydney Morning Herald.

Greste wrote: “To be clear, Julian Assange is not a journalist, and WikiLeaks is not a news organisation.” Journalism, he condescendingly pontificated, “demands more than simply acquiring confidential information and releasing it unfiltered onto the internet for punters to sort through. It comes with responsibility.”

That is, Greste advocates the elitist and anti-democratic conception that a “responsible journalist” censors information about goings-on in the political and corporate establishment that is deemed too controversial for the population to know.

Greste wrote his April column in his capacity as the spokesperson of the “Alliance for Journalists’ Freedom (AJF),” which is backed by the media corporations and trade union. The misnamed organisation denies the relationship between the persecution of whistleblowers and journalists in Australia, and the precedent established by the near nine-year, Australian government-backed, US-led vendetta to silence and destroy WikiLeaks. It is seeking to undermine the campaign to defend Assange.

After the discussion, Greste and his panel were posed with three questions on Assange from the audience. Coll said that his case raised the need to be “vigilant.” Greste admitted his prosecution was a “travesty” and that he was unlikely to get a “fair trial.” Neither of them, however, offered any support for the campaign defending Assange and Manning and demanding their freedom.

With the countdown underway toward the February court hearing in Britain to rubberstamp Julian Assange’s extradition to the US, all organisations and individuals must decide on which side of the fence they will stand—with the fight of the working class for democratic and social rights or with the lurch by the ruling elite toward dictatorship.

The conclusion that this writer drew from the Opera House event is that the panelists had made their choice.