The indefinite walkout, which began on Tuesday, was in response to government refusals to grant the strike demands, which include the payment of all salary increases provided to other public sector employees since 2015, as well as higher wage incentives and a pension scheme. 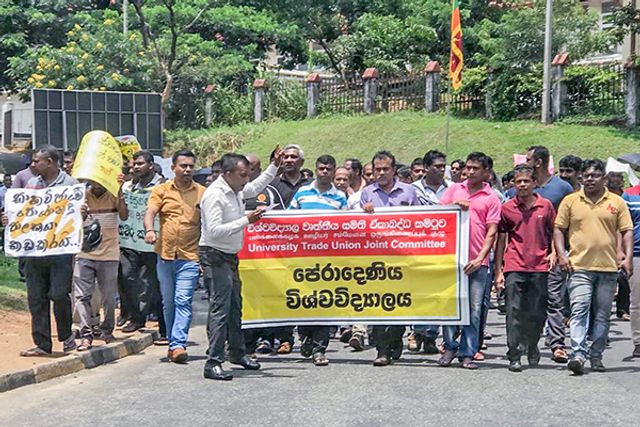 Previous reports indicated that Federation of University Teachers Associations (FUTA) members would join the strike. This has not occurred despite university teachers indicating they are keen to fight for higher salaries and improved education facilities.

Contacted by a World Socialist Web Site (WSWS) reporter, FUTA president Rohan Fernando said union officials had held a discussion with Prime Minister Ranil Wickremesinghe on September 4 on a university reform bill. Fernando claimed that Wickremesinghe “assured” the union leaders that the bill would not be implemented without consulting them.

Coinciding with the university workers’ walkout, public administrative officers held a national two-day sick-leave campaign on Tuesday and Wednesday. Government school teachers announced they will strike over wages and conditions on September 26 and 27.

Notwithstanding the unions’ efforts to limit the island-wide university walkout, and isolate it from industrial action by other workers, the strikers held demonstrations at their respective campuses.

Socialist Equality Party members distributed copies of the SEP’s statement “A socialist perspective for the Sri Lankan university employees’ struggle” at some of the rallies.

Numbers of strikers spoke with the WSWS, voicing their anger over difficult working conditions and the current and previous governments’ attacks on their low wages. Many issued calls for united action by all workers, and criticised the unions’ attempts to roll back their struggles.

On Tuesday, about 300 workers demonstrated and chanted slogans near the entrance to Moratuwa University, south of Colombo. Addressing a meeting after the protest, JCUTU Moratuwa branch president K.M. Sirisena declared: “We might get a discussion [with authorities] on the 16th or 17th this month and it’s possible we may get a solution from this discussion.”

Last week, the JCUTU Moratuwa branch president is reported to have said that if the forthcoming presidential election campaign were announced soon, the unions would have to end the strike. In other words, the union leadership is looking for any excuse to call-off the industrial action.

Anura, a technical worker from Moratuwa University, told the WSWS he was forced to look for work overseas after passing his advance level exams. Following his return to Sri Lanka, he secured temporary employment as an AutoCAD draftsman at Colombo University and later got a job at Moratuwa.

“I have two children. The oldest one is a graduate and the other is waiting to enrol at university, so both are unemployed. My wife had to resign from her university job because of illness,” he explained.

“My gross monthly salary is around 55,000 rupees (about $US305), so I’ve been forced into part-time work because my university salary is not enough.”

Niranjala, also from Moratuwa University, said all the problems facing the strikers’ were related to economic hardship. “It is clear that the workers cannot fight to overcome these hardships without a common struggle,” she said. “We oppose the trade unions working to bring capitalist parties to power.” 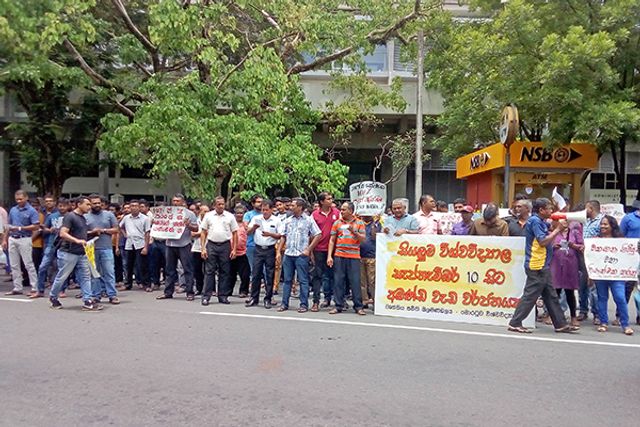 Priyantha, a technical worker, said workers should launch a general strike. “You can see from the many struggles that have erupted in Sri Lanka that the workers are ready to fight for their rights but the unions divide and discourage them,” he said.

“The university unions have betrayed our struggles, always accepting the false promises made by the government. I understand, as you’ve explained, that the unions are the main obstacle in broadening the workers’ struggles.”

At Peradeniya University, near Kandy, over 400 workers marched for about a kilometre—from the administrative office to main campus—and held a demonstration. An informatics worker told the WSWS he received only 57,000 rupees a month after deductions, and struggled to live.

“Everything—the cost of essentials and charges for services, including electricity, water and transport—has gone up. I’ve got two children who are still in school and so I’m compelled to do part-time jobs to pay for basic family expenses,” he said.

In Sri Lanka’s north, all Jaffna University workers, including at the Kilinochchi and Vavuniya campuses, are participating in the strike. Some faculties, such as law and management, are conducting lectures for final-year students, following requests from the students’ union.

“Manpower workers”—i.e., employees hired by contracting companies—at Jaffna and Kilinochchi campuses are holding a hunger-strike protest outside Jaffna University’s main gate. They are being supported by other contract employees demanding permanency.

Universities have slashed expenditure by employing hundreds of low-paid manpower and contract workers. There are over 100 workers employed on this basis, some of them for up to four years, at the Jaffna and Kilinochchi campuses. 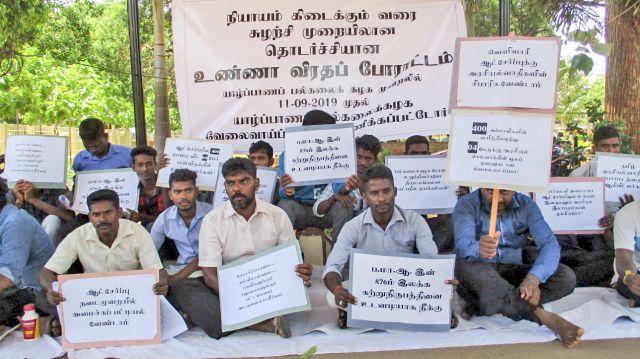 Hunger strikers told the WSWS that when Sri Lanka’s higher education ministry calls for applications for permanent jobs, the university authorities ignore the manpower workers and attempt to hire the minister’s cronies.

S. Manimaran, a manpower worker, said he had been at the campus for four years. “We are only paid 1,000 rupees per day but you can’t survive on this. If we can’t attend work for some reason then we don’t receive anything, and when we sometimes have to work beyond normal working hours we’re not paid overtime.”

K. Paramalingam, a permanent worker in the arts faculty, referred to the SEP statement on the strike. “I’ve read your leaflets and you’ve written good things,” he said. “Were fighting continuously but we’ve not been able to get anything. The government has no solution and so for us there’s no alternative without a struggle.”

N. Thasarathan, a geography teacher at the university, voiced his solidarity with the striking non-academic employees. “I support the workers’ strike. We also face salary discriminations. When compared with other countries, Sri Lankan lecturers get a low pay.”

On Tuesday, over 300 striking Colombo University workers held a 30-minute demonstration outside the campus. Union officials were hostile to SEP campaigners and blocked distribution of the party’s statement. 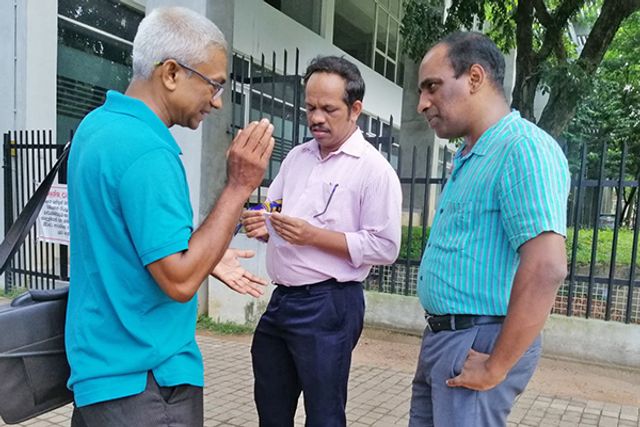 When SEP members challenged this blatant censorship and asserted their democratic rights, L.D.G. Richmond, who introduced himself as a union media secretary, responded with a threat: “If you distribute leaflets there will be trouble [for you].”

Richmond’s crude intimidation is yet another indication that the union bureaucracy is desperate to block any discussion of the SEP’s socialist perspective. The unions are determined to prevent the strike developing into a broader political confrontation of education workers and students, and other sections of the working class, with the Sri Lankan government and the entire political establishment.