By our correspondents
19 September 2019

More than 5,000 striking university workers and executive officers demonstrated in Colombo, holding a protest near the University Grant Commission (UGC) office yesterday, to press for their demands on a wage hike, proper pension scheme and other benefits.

Strikers marched about one kilometre from Independent Square, chanting slogans and holding a nearly one-hour protest in front of the UGC premises. Not only were there workers from universities and higher education in Colombo and its suburbs, but also thousands from the north, east, south and hill districts who participated in the protest.

An indefinite strike of 17,000 non-academic workers and executive officers, which began on September 11, has now entered its second week. As the militancy among workers is growing, the Inter-University Trade Union Unity (IUTU), a coalition of several unions, has been compelled to call a series of public protests. 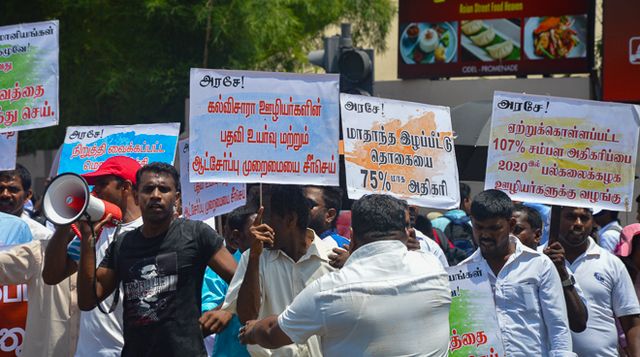 On Monday, about 300 workers at Peradeniya University held a demonstration in the nearby town of Kandy, the capital of the hill district. On Tuesday, several demonstrations were held inside university premises. Tomorrow, another major protest at universities in and around Colombo is scheduled at Nugegoda. Demonstrations will take place in other towns with universities.

The university workers’ strike is taking place amid a growing mood of opposition among workers, as well as professionals, over declining living conditions. Yesterday hundreds of Sri Lanka Transport Board workers gathered in Colombo to hold a demonstration to press for their wage demands. By Tuesday, workers at 80 bus depots, out of 110 around the country, were on strike.

At the same time, tens of thousands of Government Medical Officers Association employees stopped work yesterday, demanding a pay hike and warning they would resort to an indefinite strike from September 25 if their demand was not met. 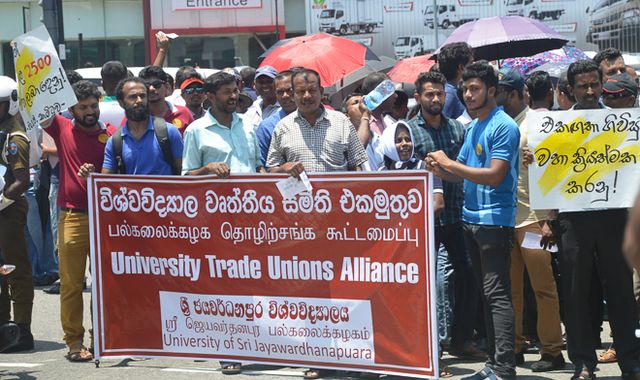 At a meeting in front of the UGC yesterday, union leader Dhammika Priyantha, said if the demands were not resolved in two weeks “decisive steps will be taken.” He did not explain what the “decisive steps” would be, but his aim was to defuse workers’ anger by convincing them that their demands would be met by pressuring the government.

Priyantha went on to lament that the authorities had not called them in for a discussion. “The Minister [for higher education, Rauf Hakeem] has not even intervened,” he said. Priyantha is the president of the Joint Committee University Trade Unions, affiliated to IUTU.

The attitude of the UGC and the minister demonstrates that the government has no intention of granting the workers’ demands. The Colombo regime is cash-strapped and bent on implementing a program, dictated by the International Monetary Fund, to slash government expenditure, including on social programs such as education and health.

Opposed to the working class mounting any independent political fight based on socialist policies, the trade unions are treacherously seeking to divert workers’ opposition behind the right-wing parties. Speaking at yesterday’s meeting, the leader of the Commercial and Industrial Services Workers Progressive Union, Janaka Perera, declared, “If this government does not address these demands our government will.”

Perera’s union is affiliated to the Sri Lanka Podujana Peramuna (SLPP) led by former President Mahinda Rajapakse. The SLPP, like other sections of the political establishment, is vigorously campaigning to come to power and shift to police state rule, in order to crush the growing social opposition.

In contrast to the unions’ role, workers’ opposition is growing, not only to the government, but also to the unions and capitalist parties. Earlier, the unions hinted that they would be compelled to call off the strike if a presidential election were called. Yesterday, the country’s Election Commission announced that it will call nominations for presidential elections from October 7, and that the elections will be held on November 16. 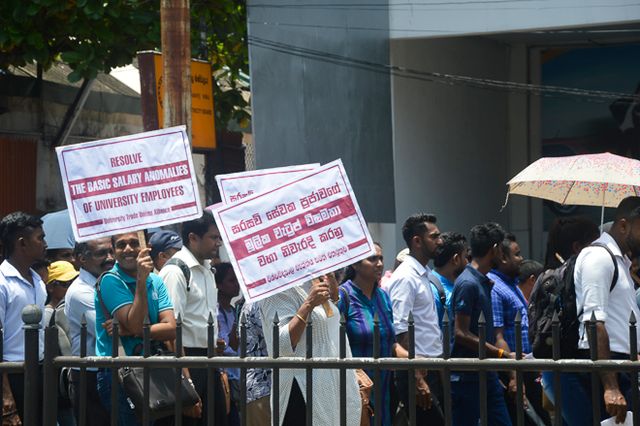 Many non-academic workers, however, told World Socialist Web Site reporters that they opposed the shutdown of the strike in the event of an election.

A worker who participated in the protest from North-Western University explained the financial difficulties he was experiencing amid rising living expenses. “We have been fighting for three years for this pay hike, but the government has disregarded our demands. I participated in this protest because it is a common fight, although I have no faith that the government will give in to our demands,” he said.

“We voted for this government but we have been cheated. I don’t believe that any government that comes to power in the coming elections, whether UNP, SLFP or SLPP, will grant us decent living conditions. The JVP is no different. All these parties hand out promises—until they get into power and then forget them.”

Last week, in a demonstration of the role of the trade unions, the Jaffna union branch of non-academic workers issued a statement on Thursday asking workers to participate in the reactionary nationalist demonstration, “Rise up Tamils” [Eluka Tamils], called by the bourgeois Tamil Peoples Council (TPC), which was held on Monday. 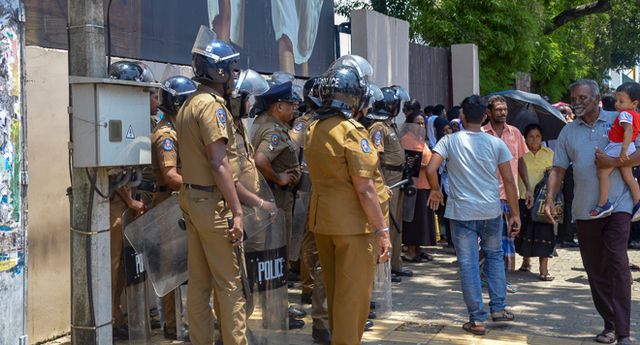 The Socialist Equality Party’s (SEP) Jaffna branch issued a leaflet calling on workers to reject this request. The SEP leaflet noted: “Lessons have been learned in blood by the Tamil masses, Sinhalese and Muslims that the programs of the bourgeoisie in the South and in the north and east, have only brought them one disaster after another.

“Workers must turn to their class brothers and sisters in the south, in India and internationally, to unite with them and fight against the attacks on their rights. The source of the attacks on the social rights and living conditions of the working class is Sri Lankan capitalism, which is part of world capitalism.” It called for the organisation of action committees to advance the fight for the workers’ demands. 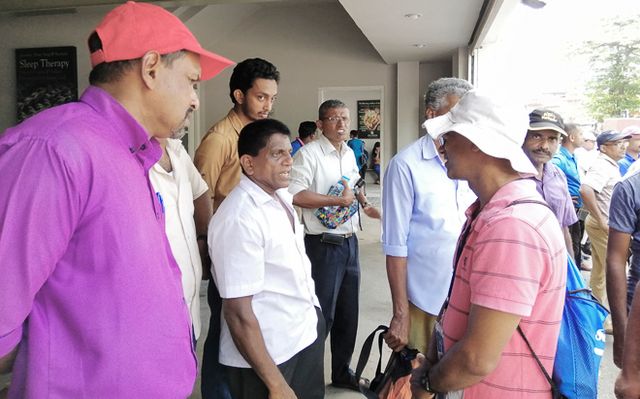 An SEP member (right) in discussion with workers

Several workers at Jaffna University yesterday responded to the SEP’s call. One worker, who did not want his name published, said: “We know [TPC leader] Wigneswaran. He used to be with Colombo’s rulers [while he was a Supreme Court judge]. Now he is talking about the Tamils. We don’t want any divisions between Sinhala and Tamil. It was just such a policy that led to the country’s civil war. We agree with what you say in the leaflet.”

As the political crisis of the government and the ruling class as a whole deepens, the trade unions are desperately seeking to suppress the workers’ struggle. As the non-academic workers’ strike began, the SEP emphasised that workers should build action committees, take the fight into their own hands and expand the struggle by calling for support for the working class in Sri Lanka and internationally on the basis of the fight for socialist policies.