A large crowd rallied outside Belmarsh Prison in London on Saturday as jailed WikiLeaks publisher Julian Assange received the Gavin MacFadyen Award 2019—the only journalism prize given by whistle-blowers. Assange’s father John Shipton accepted the award on his son’s behalf.

Saturday’s rally was the first outside Belmarsh Prison since District Judge Vanessa Baraitser ruled September 13 that Assange would not be released despite the end of his sentence on a trumped-up bail infringement. He is now being held in remand over a US extradition request and faces Espionage Act charges carrying a 175-year prison term. 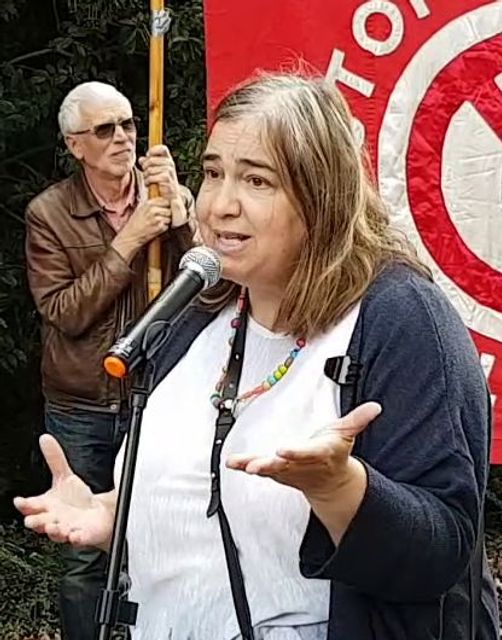 Emmy Butlin from the Julian Assange Defence Committee opened Saturday’s award ceremony just metres from the prison’s maximum-security walls and razor-wire fences. She told those assembled that the award was “an amazing opportunity to honour Julian Assange, unfairly imprisoned behind those walls.”

The award was delivered by Eileen Chubb, a whistle-blower who led efforts to expose criminal abuse in the social care sector. Chubb is founder and director of Compassion in Care and was co-founder of “The Whistler” with the late investigative journalist Gavin MacFadyen, a friend and mentor of Assange.

Chubb outlined the history of the Gavin MacFadyen award, “I dedicated this award to my friend Gavin who was passionate about great journalism, being a power for good, to give a voice to whistle-blowers, so the truth can be told, no matter how inconvenient that truth is.

“In highlighting great journalism this award also aims to shine a light on the worst of journalism. That which aids and abets lies or which simply remains silent when it should speak out. This year’s award is unique because it pays tribute to one of the greatest journalists and publishers in history, Julian Assange.

“This man has committed no crime and his detention is a stain on the UK justice system. As a whistle-blower, I know only too well that injustice, abuse and all the wrongs in this world can only prevail if silence prevails, if there is no one to bear witness and there is no one to publish the truth. This year’s award also shines a light on silence—the very opposite of the truly great journalism of Julian Assange.”

Chubb’s tribute concluded, “Whistle-blowers give this award to Julian Assange—courage paying tribute to courage. There are only four words that matter in this tribute: ‘Free Julian Assange Now’.”

Accepting the award, John Shipton said, “Julian’s contribution is unparalleled. He’s benefitted many, many people the world over, particularly exposing war crimes or Trafigura dumping poisonous waste and destroying coastal regions in east Africa, or the cables which allowed us to see the sordid manipulations that diplomats go through to sell down their populations to enrich the United States. 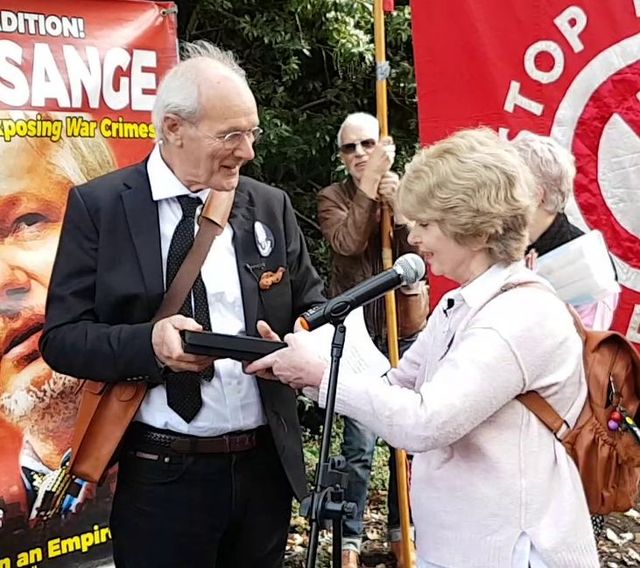 "Julian’s treatment by the Crown prosecuting authorities is a sordid treachery from top to bottom.”

Shipton described the politically biased persecution of his son by the English judiciary, including Judge Emma Arbuthnot’s “hysterical, elated, callous summing up” during a February 2018 bail appeal hearing, “saying that if Julian missed out sunshine, he should stand on the balcony.” When Assange’s legal team had shown Arbuthnot documentary evidence of Crown Prosecution Service “manipulations and contortions” of Assange’s due process rights, she had simply replied, “That’s interesting.”

After Assange had been illegally seized from the Ecuadorian Embassy he appeared before Judge Michael Snow: “Snow had seen Julian for about five minutes. His degree is in law, but he fancies himself as a psychologist and said to Julian, he’s a ‘narcissist.’ These people are absurd. How can they get work?”

Shipton recalled this month’s court hearing presided over by Judge Baraitser. “She decided to hear a case that wasn’t before her. She didn’t have a bail appeal, but she decided she’d rule on a bail appeal and said that Julian had ‘absconded’ and wouldn’t give him bail.” 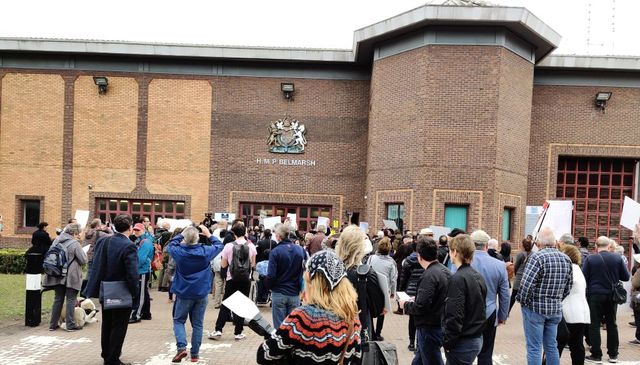 “Julian was given asylum,” he explained, “and consequently he falls under the conventions of asylum which the United Kingdom is a signatory to, as is Sweden and my country, Australia. It means that it’s not possible for Julian to break bail. The rights of asylum allow Julian to travel over UK land to take up asylum. Every one of these conventions has been scrapped, disobeyed ...” He concluded, “I believe that with your help we will win this. I have no doubt. You cannot in my view crush such an outstanding person and event as WikiLeaks.” 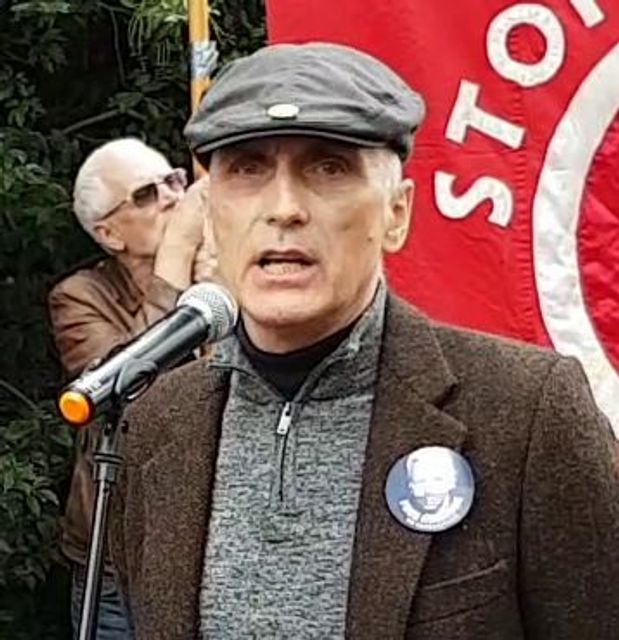 Williamson depicted the state vendetta against Assange as a departure from the supposed centuries-long commitment of British imperialism to democracy. “Britain used to pride itself on standing up for human rights. And here we have a situation where someone we should be venerating, celebrating, is being forced to endure solitary confinement which is tantamount to torture. Torture taking place on British soil. This cannot be allowed to stand.”

Williamson had written to the Home Secretary demanding that Britain “honour its obligations” and release Assange. “We’re behaving as some sort of tinpot dictator,” he said. He urged those gathered to “bring more pressure on other parliamentarians,” claiming, “I know that the Shadow Home Secretary Diane Abbott and the leader of the opposition Jeremy Corbyn have made their support for Julian very clear when he was dragged from the Ecuadorian Embassy.”

Corbyn and Abbott have been silent on Assange since the US Department of Justice laid Espionage Act charges against him on May 23. Their initial statements opposing US extradition after Assange was violently dragged from the embassy on April 11, Corbyn via Twitter and Abbott in the House of Commons, were followed by a grovelling backdown after they faced opposition from the Blairite warmongers who dominate the Parliamentary Labour Party.

Williamson is no stranger to Corbyn and Abbott’s double-dealing. He has been twice suspended from the Labour Party, with Corbyn’s de facto support. He was targeted by the party’s right-wing because he was Corbyn’s most vocal defender, exposing bogus anti-Semitism smears aimed at removing Corbyn as leader. 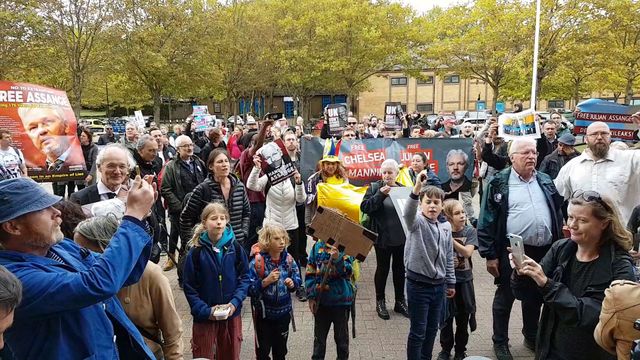 None of this stopped Williamson from concluding that the Brexit crisis might deliver a solution: “There is a possibility that we might have an interim government and we might have Jeremy Corbyn going across the threshold of number 10 Downing Street … we should use that opportunity and we should bring pressure to bear if there is a change in government to say, ‘Do the right thing, and free Julian Assange.’”

Socialist Equality Party National Secretary Chris Marsden emphasised that Assange’s persecution was a product of the drive to war and dictatorial rule by the US, British and world imperialism—and that his freedom would be won through the independent struggle of the working class.

“The targeting of Assange and Manning takes place even as Trump is threatening war against Iran, with Britain, Germany and France signalling their assent. Boris Johnson did so while hailing Trump as the ultimate dealmaker! In April, Johnson said that it was “only right” that Assange now faces ‘justice.’ Since then we have all been provided with ample proof of Johnson’s respect for the law!

“We all know that here in the UK contending right-wing factions of the ruling elite are tearing themselves apart over Brexit. But they are united in one thing—the understanding that state repression will be required to deal with the social and political opposition generated by the threatened collapse of the UK economy. Operation Yellowhammer revealed plans to deploy 50,000 troops, 10,000 riot police and to bring in emergency legislation to outlaw strikes—and no one is opposing this, including the Labour Party!” 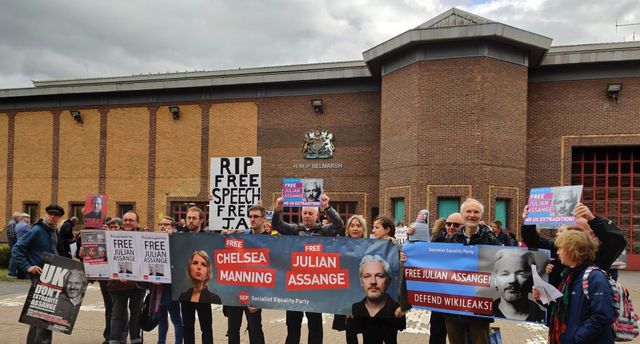 Marsden explained that the Socialist Equality Parties internationally and the World Socialist Web Site had defended Assange from day one. The international working class, he concluded, “has the power to defeat the ruling class, its politicians, its judges, its media, its spies and its military-police apparatus and free Julian Assange!”

The rally ended with a spirited march to the entrance of Belmarsh Prison, with demonstrators chanting loudly, “Free, free, Julian Assange!” and “There’s only one decision—No extradition!”