Some 13,000 people protested in Berlin on Sunday against anti-Semitism and right-wing terrorism. After a rally at Bebelplatz, the demonstrators marched to the New Synagogue.

In addition, more than 2,000 people protested in Halle, where a heavily-armed right-wing extremist sought to storm a synagogue last Wednesday and massacre those participating in the observance of Yom Kippur, the holiest day of the Jewish calendar. The neo-Nazi, Stephan Balliet, fatally shot two people outside the synagogue and wounded several others. 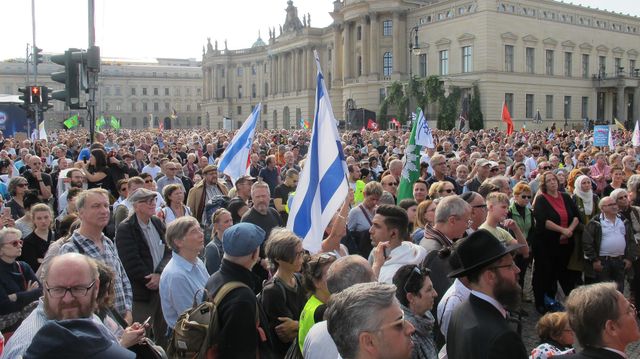 The protests on Sunday followed anti-fascist rallies in cities across Germany on Saturday.

The Unteilbar (Indivisible) initiative called for the demonstration in Berlin under the slogan “Don’t yield an inch! Anti-Semitism and racism kill.”

The statement from the alliance, which is made up of various groups and civil rights organisations, declares: “Right-wing terrorism threatens our society!” The gunman in Halle is not a lone wolf, it continues, explaining that his attack is connected to “fortified militant Nazi structures, the NSU (National Socialist Underground) network, and right-wing networks in the intelligence agencies.” It condemns the “lack of will for transparency” of the police and “non-stop attempts to trivialise the right-wing threat” on the part of politicians and the media. 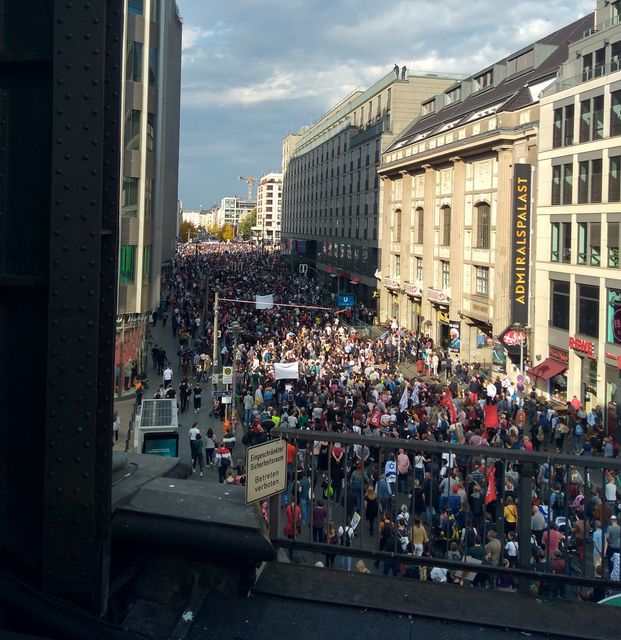 Protesters march through the streets

This weekend’s protests showed once again the widespread opposition that exists to the return of fascism in Germany. The Berlin protest took place on the first anniversary of Unteilbar’s first demonstration, in which 250,000 people gathered at Alexanderplatz following the right-wing extremist rampage in Chemnitz. That rally denounced the rise of the far-right Alternative for Germany (AfD) and the right-wing, anti-refugee policies of the major parties.

As at last year’s mass demonstration, the Sozialistische Gleichheitspartei (SGP) had a strong presence at Sunday’s rally in Berlin. SGP members joined the march, distributed a leaflet headlined “Who is responsible for right-wing terrorism?” and sold copies of the book Why are They Back?, which traces the rise of far-right and neo-Nazi forces and its connection to the turn by the German bourgeoisie to militarism and aggressive imperialist policies. The book also exposes the complicity of the traditional parties of rule in Germany—the Christian Democrats and Social Democratic Party—as well as the Left Party in the elevation of the far-right AfD, and the role of far-right academics and university administrations in trivializing the crimes of the Nazis. 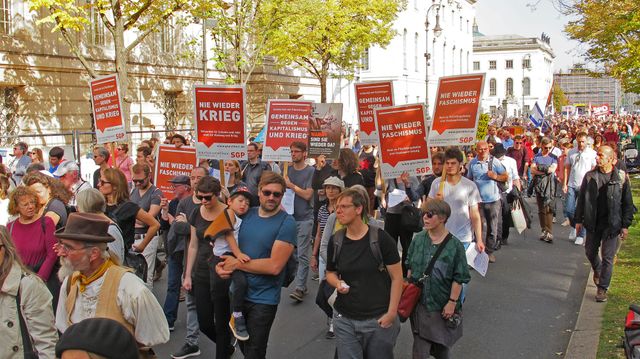 SGP placards at the demonstration

SGP supporters at the rally explained how the ruling class has in recent years created the ideological climate and political conditions for right-wing extremist terrorism. They stressed that as in the 1930s, the struggle against fascism requires the independent mobilisation of the working class and a socialist perspective.

World Socialist Web Site reporters interviewed protesters who joined the demonstration out of concern and anger over the attack in Halle.

Jörg, a 51-year-old from Berlin, told the WSWS: “I’m shocked about the murders in Halle. After the attacks in New Zealand and America, it’s now happening in Germany.”

Like many others, Jörg was concerned about the presence of fascist networks in the police, military and intelligence agencies. “It’s certainly significant that the NSU was able to carry out murders in Germany without the domestic intelligence agency doing anything about it. It makes you suspect that something wasn’t right.”

He added that one “cannot rely on the politicians who are now making widely publicised media appearances. Only the people who are gathered here today and the many millions who don’t want fascist terrorism can stop it.” 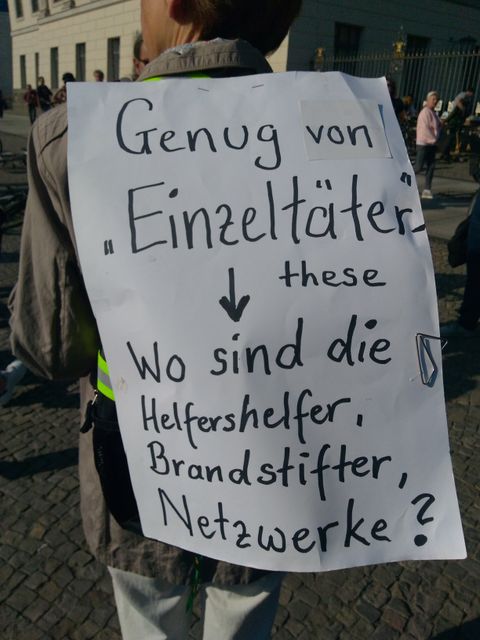 Angela, from the group “Grandmothers against the Right,” explained, “I’m here because I find that this tradition, to do nothing against the far-right structures, is unfortunately a tradition with a terribly long history. After every attack, they talk about a turning point, but then nothing changes. I can no longer tolerate it.”

In Germany of all places, she stressed, where Hitlerite fascism raged from 1933 to 1945, carrying out the worst crimes in history, one cannot remain silent. “If we stay silent, we become accomplices. My parents were born in 1904 and 1911 and supported the Nazi Party. I got into conflicts over this. ‘Didn't you see anything? Why did you stay silent? What was the matter? Even if you lived in small villages, there must have been Jews there as well.’ I don’t want to hear that from my daughter.”

Angela also criticised the established parties and state authorities. The issue is not “lone wolves,” she said, but “right-wing networks.” The “accomplices” and “inciters” sit in government. She said she was “shocked by the right-wing developments for a long time. Since the 1990s, I have protested against the hardening of immigration law, the abolition of the right to asylum, and the watering-down of our Basic Law.”

Camille, a 25-year-old student, expressed the fear that “as a refugee, foreigner or left-winger, you can’t be safe in this country if Nazis can do those sorts of things. Above all, I am furious at the politicians, who are doing nothing to oppose the AfD and other right-wing forces.”

Asked about the role played by the grand coalition parties and other established parties, which have essentially embraced and implemented the AfD’s policies, she remarked, “Yes, that’s right. That’s why demonstrations like today’s are so important. You can’t rely on the parties.” 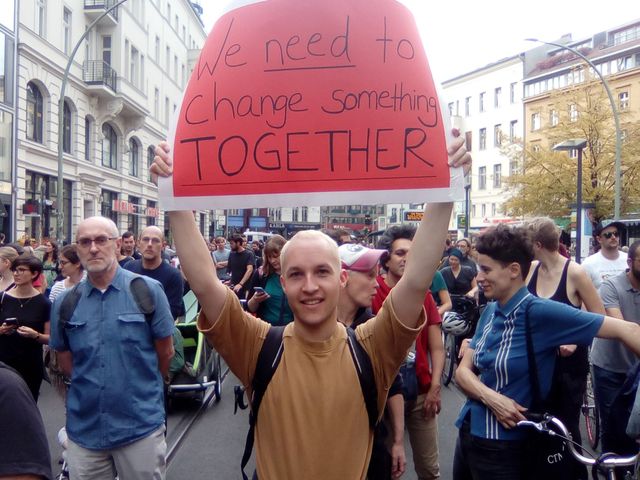 Leo studies art in Mannheim and was visiting Berlin. He said he came to the demonstration to express his horror over the attack in Halle and show his solidarity with the victims. “I think it’s great that this demonstration was organised at such short notice and that so many are here and supporting it,” he said. “Today, the issue for me is to send a message in opposition to everything that has happened over recent years, beginning with the NSU murders. As tragic as last week’s attack was, we have to be clear about the fact that it wasn’t the only one.”

Caro, who lives and works in Berlin, also pointed out that Germany’s domestic intelligence agency has close ties to right-wing extremist terrorist structures and protects them. “There is no question that the Secret Service was closely tied to the NSU,” he said. “Some files were destroyed, others were locked away from the public for decades.”

He noted that the former head of the intelligence agency, Hans-Georg Maassen, has made clear in his statements that he sympathises with the far-right. “I find Maassen’s political views shocking. This man led the domestic intelligence service for years. In addition, there is the fact that the intelligence agency had large numbers of informants operating in the network around the NSU, just like with the NPD (National Democratic Party). What were they doing there?”

Caro pointed out that the German-Turkish journalist and publicist Denis Yücel has described the intelligence agency as “the most dangerous agency in Germany” and called it “unreformable.” He said, “I agree with that. In my opinion, a ‘state within the state’ is emerging here, just like in many other countries. The Office for the Protection of the Constitution (Verfassungsschutz) has for years contributed nothing to the protection of the constitution, but has rather undermined its fundamentals. This tendency strengthens the far-right. The media also plays a role.” 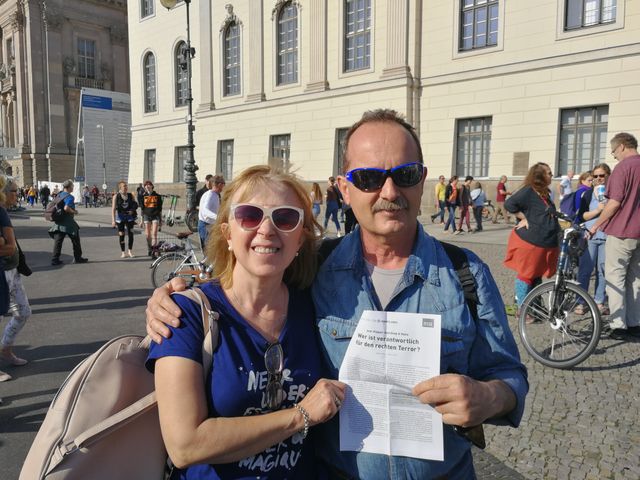 Guillermo and Aradiana from Argentina joined the protest after hearing about the attack in Halle. “We fully agree with this demonstration in terms of its condemnation of right-wing extremism, and we support the people who are here,” they said. They pointed out that the rise of the far-right is an international phenomenon. “Right-wing extremism is also a danger in Argentina,” said Guillermo. “We experienced how that led to the violation of democratic rights. Under the military dictatorship in particular. They killed political opponents. The present government under Macri thinks in a very similar way.”