A 97 percent strike vote by over 110,000 postal workers in Britain was met with an immediate rebuke by the Communication Workers Union (CWU), who declined to set any date for a walkout.

The vote was announced in the large Light Auditorium in Friends Meeting House in central London and live streamed on the CWU’s Facebook page.

Those postal workers present or watching online could have been forgiven for thinking that the CWU was about to storm the barricades, such was the faux “up and at em” atmosphere manufactured by the union bureaucracy.

Just prior to the result being announced, time served CWU bureaucrat Jane Loftus, the former member of the Socialist Workers Party who masquerades as a “left”, announced that a film would be played about the union’s ballot campaign. Everyone was urged to get up and dance and cheer along to the thudding rock soundtrack while waving CWU flags in the air. 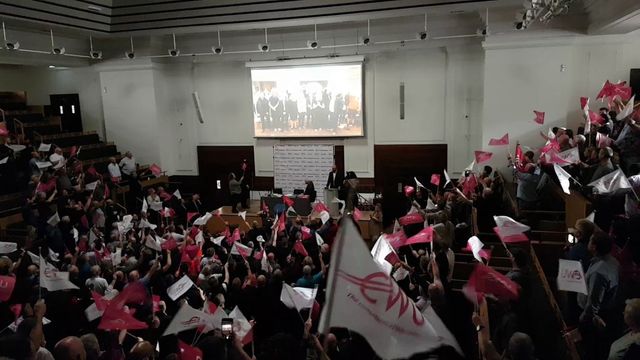 The CWU flag waving session at the begining of the meeting

All were then told to sit down and “make some history”. To cheers, Loftus announced that all three of the CWU’s membership sections balloted had supported industrial action by margin of 94 percent, 95 percent and 97 percent.

But after the party came the hangover, and without any hanging around. Despite the decisive mandate for a national strike against the Royal Mail Group’s (RMG) plans for further attacks, including splitting its Parcelforce parcel delivery from the traditional postal service, the words “industrial action” or “strike” were never mentioned in their initial comments by CWU General Secretary Dave Ward and Deputy General Secretary Terry Pullinger.

UK postal workers vote 97% to strike, but CWU vows to lobby shareholders instead

Ward had punched the air, cheering as each ballot result was announced just a few minutes earlier. But his phoney show of enthusiasm immediately gave way to the issues that really concern him. Addressing the rally after the vote tallies were read, Ward stated only that the vote was a “damning indictment on the way that this company is being led” and that Royal Mail CEO Rico Back and the board “should be considering their positions as to whether or not they stayed in charge of Royal Mail.”

There were “huge issues about the future of our industry. We say to the press today, we say to the shareholders of the company, ‘we are going to make sure that we change your plans’.”

Outlining the pro-capitalist perspective of the CWU, which only wants to supply Royal Mail with a highly exploitable workforce able to boost profits, Ward continued, “and we are going to campaign, on top of this vote, with those shareholders. We are going to come around and speak to those individual shareholders and explain to them there’s a better role for postal workers going forward that can make this company very successful.”

The union could be trusted by management, said Ward, “as we understand that change is necessary. We’ve always been leaders of change in our union.”

Only later, when accredited media were permitted to ask questions, was the issue of strike action even broached when the BBC and Financial Times asked when this might take place.

Ward replied, “Not at the moment… that’s a matter for our executive to determine. We’re a responsible trade union.”

Stating in passing that “We will go there [a strike] if we can’t get the agreement back on track,” he again stressed that industrial action was a long way at the back of the queue in priorities. The main thing was that “on top of that we are going to deploy some other tactics during this dispute as well… We mean what we say when we said we will go and speak to individual shareholders, key shareholders, and explain to them that the plan that Rico Back has put forward is not the right plan. So let’s wait and see. That’s a matter that we’ll determine over the coming weeks.”

Pressed by the BBC as to whether speculation was true that CWU members would strike and cause massive disruption on or around Black Friday at the end of November (six weeks from now) or over the Christmas period (10 weeks away), Pullinger poured cold water on any notion that strikes were imminent or would take place on those dates. Pullinger stressed that “we’re still in a mediation process, so we’re still in a dispute resolution process and it’s not until that process ends that we could even consider that [strikes].”

Asked by the Financial Times what Back had to do for “you to call off the dispute,” Pullinger made clear that he wanted nothing more than to resume collusion with RMG in imposing attacks on his members. “What they’ve got to do is get back in line” with the Four Pillars agreement signed with the CWU in 2018. “Everything was supposed to be done together. Mutual interest on that agreement.”

No industrial action would even be considered for weeks, with Pullinger saying, regarding mediation, “We believe the process ends on Friday and then there’s three weeks before we have a parting of ways.”

Ward complained that under the leadership of Back, Royal Mail “was not setting out a serious plan for investment but a plan to maximise profits for shareholders”—the same shareholders that Ward is so keen to talk to!

How far the CWU has fully accepted privatisation was clear in Ward’s statement that, as opposed to Back, “What we want to see is proper investment across the whole of the business. There is no reason why, even though the world of communications is changing, that we can’t build a successful Royal Mail. We will put forward a vision where postal workers expand their role in supporting local communities and in support of local businesses growth. And what we need is someone that shares that vision with us at the top of the company.”

Ward and Pullinger repeatedly referred to the 2018 deal as “progressive”, with Pullinger boasting that “we got an agreement without taking one second of industrial action”.

In the CWU’s official statement on the ballot results, Pullinger again hailed the agreement declaring, “Just over one year ago the Royal Mail Group Board and the CWU agreed a blue print agreement for the future, a progressive agreement that included an historic pension solution, a mutual interest driven relationship and a joint vision for a successful postal service with social aims.”

The fact is the Four Pillars Agreement was a sellout and included an inferior pension scheme, reduction in working hours in return for productivity boosts through alterations to delivery routes, new duty patterns, new working practices and greater use of technology to monitor performance.

Pullinger then turned to nationalism denouncing the current situation as a “national disgrace”. He attacked Back saying he was “a German national who lives in Switzerland, a millionaire who could not give a damn about this business.” He continued, “in fact he’s on record as saying he took the job and he didn’t even know about the heritage till he went to national Post Office museum.”

The whipping up of nationalist sentiment by the CWU dovetails with the nationalist, anti-immigrant sentiment being whipped up by the ruling class aimed at pitting native born against non-native workers. It follows a wildcat strike earlier this month by Royal Mail workers in Merseyside against management’s use of racist comments against a Muslim worker.