Verdi: Creating Otello and Falstaff, at the Morgan Library and Museum, through January 5, 2020.

The creation of the final two operas of Giuseppe Verdi (1813-1901), completed when the musical genius was approaching his 80th birthday, is the subject of a fascinating exhibit at the Morgan Library and Museum in New York City.

The show, “Verdi: Creating Otello and Falstaff,” on view through January 5, 2020, was made possible by loans from the Ricordi Archive in Italy. Ricordi is the distinguished classical music and opera publisher that was founded more than 200 years ago. Giulio Ricordi, the grandson of the founder, was instrumental in the process that led to the last two operas by Verdi: Otello premiered in February 1887, and Falstaff almost exactly six years later, in 1893. 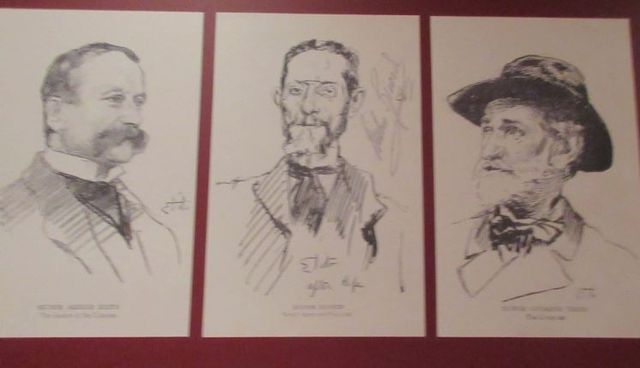 The current exhibit includes correspondence between the composer and his collaborators, along with scores, set and costume designs, posters and other promotional materials, and other memorabilia associated with this history. It evokes the musical period of 130 years ago and illustrates how Verdi, who was to live into the 20th century, kept pace with changes in the world of music while preserving and transforming the achievements of the past.

What makes the exhibit of particular interest is the way it illuminates several interrelated issues: the place of Verdi in operatic history; the particular genius expressed in his final two operas, which were very different from the more than two dozen that had preceded them; and the relationship between “new” and “old” in the musical sphere and in cultural life more broadly.

Verdi had to be lured back into the operatic field following a de facto retirement that he announced to close friends and colleagues after the successful premiere of Aida in 1871. He was then 58 years old and had been the most famous operatic composer for at least 20 years, decades that had seen the appearance of such masterpieces as La Traviata, Il Trovatore and Rigoletto in the 1850s, followed by A Masked Ball, La Forza del Destino and Don Carlo in the 1860s. Though he wrote his famous Requiem in 1874, he did not produce any new operas during the rest of that decade.

He was somewhat weary of the often complex processes and negotiations involved in both the creation and the staging of new works. The composer also began to feel that the musical world was passing him by. In one letter quoted in the exhibit, Verdi writes in 1878 that any new efforts on his part are likely to be followed by the accusation that “I’ve become a follower of Wagner.” 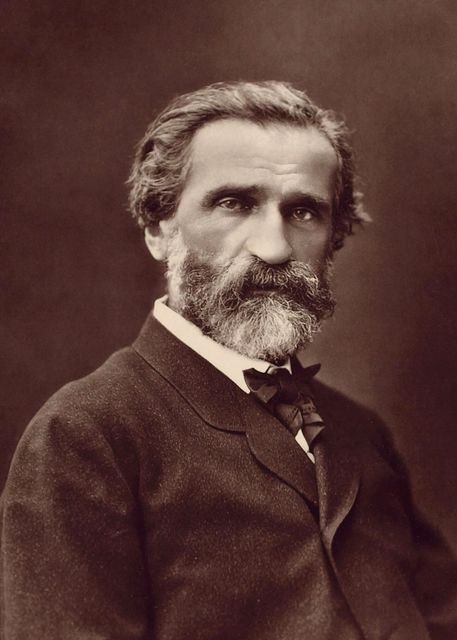 This changed when Giulio Ricordi (1840-1912) enlisted the cooperation of Arrigo Boito (1842-1918), who was a young composer and librettist. Ricordi was not only Verdi’s publisher; he assisted with almost every aspect of artistic creation and production. He was also to be involved in the operatic careers of younger composers, including Puccini, Ponchielli and Giordano.

Boito, born in 1842, was already known as an avant-garde essayist, poet and librettist. He also composed, but completed only one opera, Mefistofele, in 1868. Verdi was not impressed by this work at its premiere, but in fact Mefistofele, although far less frequently performed than Verdi’s masterpieces, remains in the repertory today. Boito, who also worked with Ponchielli on La Gioconda, is regarded as one of the finest opera librettists in history.

Ricordi and Boito, both a generation younger than the operatic master, worked to convince him to return to the stage. In 1879 they suggested an opera based on Shakespeare’s Othello. It took more than seven years, but Verdi’s Otello was finally premiered in 1887, 16 years after Aida.

The long gestation period for Otello was partly the result of Verdi acclimating himself to changes in the world of music. He interrupted work on it to revise two earlier operas, Simon Boccanegra and Don Carlo, experimenting with new styles and techniques. It was only after the revision of Don Carlo in 1884 that he turned in earnest to the music for the already completed libretto of Otello.

After the successful premiere of Otello, Boito soon suggested another Shakespeare adaptation, this time based on The Merry Wives of Windsor. Verdi was enthusiastic, and what followed a few years later was only Verdi’s second comic opera. From a musical and aesthetic standpoint, Falstaff was as different from Otello as Otello had been from the earlier Verdi successes like Rigoletto.

In both of these later operas, as it turned out, the aging Verdi was wrong in his fear that he had nothing left to say. Otello combined characteristic or traditional elements, like the drinking song, the great finale that closes Act 3, and parts of the Act 1 love duet between the title character and his doomed wife Desdemona, with much that was new in Verdi’s musical output and language.

Most of the opera is through-composed in a way that differs from previous Verdi. Even in his earlier works he had extended the style associated in different ways with the music of both Mozart and the bel canto masters such as Bellini and Donizetti to make it far more dramatic and naturalistic. He still used certain conventions in these operas, however, such as the separation of arias and ensembles through the use of spoken recitative. In Otello this distinction is mostly done away with. While those used to the earlier traditions sometimes find themselves hoping for a longer development of melodic fragments than they hear in Otello, as well as the typical Verdian ensembles, Otello was and remains a theatrical as well as musical triumph.

Falstaff is different, but just as triumphant. Here the nearly 80-year-old composer connects the music and words in a way he never had before. Different rhythms, themes and harmonic elements bombard the listener. There are few if any stand-alone numbers in the opera. The composer was inspired by the play and by Boito’s sparkling libretto to reach new summits of musical genius. Opera fans who are steeped in works of the 19th century will often find Falstaff confusing at first, but the genius of Verdi becomes more and more apparent with patient listening, and especially with an appreciation of the extraordinary comic moments in the tale of the bumbling womanizer Sir John. In the midst of today’s neo-Victorian #MeToo campaign, Falstaff is a breath of fresh air in an extra-musical way as well.

The creation of these two operas is excitingly presented in the Morgan exhibit. There are many high points, including the autographed manuscript for the final scene of Falstaff, the famous fugue, in which all of the characters “break the fourth wall,” directly addressing the audience. 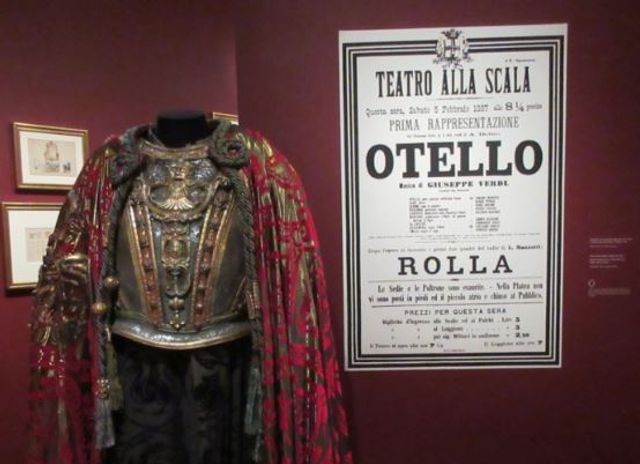 Costume for Otello from 2001-02 season in Milan

Other memorabilia include original photos from the Falstaff premiere in 1893, and original costume designs for the opera by the Austrian designer Adolf Hohenstein. Ricordi sent Hohenstein to Britain to study period architecture for the opera’s sets, as well as garments in the British Museum dating from the period of Henry IV for the opera’s costumes.

The exhibit addresses the issue of blackface—the past practice of using white singers in dark skin makeup to depict the Moor of Venice. It is explained that this has given way to color-blind casting, with the strongest performers used, regardless of skin color or racial background, and without dark makeup used for artificial purposes.

An especially impressive element in the show is Giulio Ricordi’s annotated copy of the libretto for Otello at its premiere. Ricordi, as was his custom, used the margins to indicate the audience response. Here he marked, on various occasions, and of course in Italian: “applause,” “encore granted,” “thunderous applause,” along with repeated curtain calls for the conductor, cast and both Verdi and Boito. It’s the next best thing to being present for the occasion! 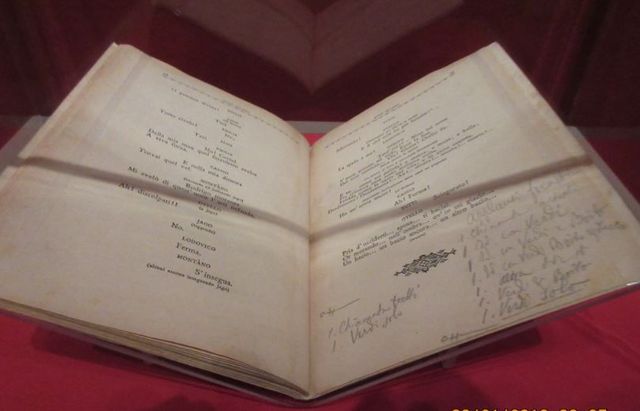 Annotated libretto of Giulio Ricordi from Otello premiere in February 1887

Another appealing part of the exhibit are video excerpts from both of the operas. These include Sergei Leiferkus as Iago in an Otello production at the Royal Opera House in London, Bryn Terfel as Falstaff, and Ambrogio Maestri as Falstaff in a marvelous performance at the Met Opera in New York in 2013, under James Levine.

The exhibit correctly suggests that there was something fortuitous about the circumstances of Verdi’s late return to opera. Without the persistence of Ricordi, the patient efforts over many years to encourage the collaboration between the composer and his librettist who was almost 30 years his junior, Otello and Falstaff might never have been created. 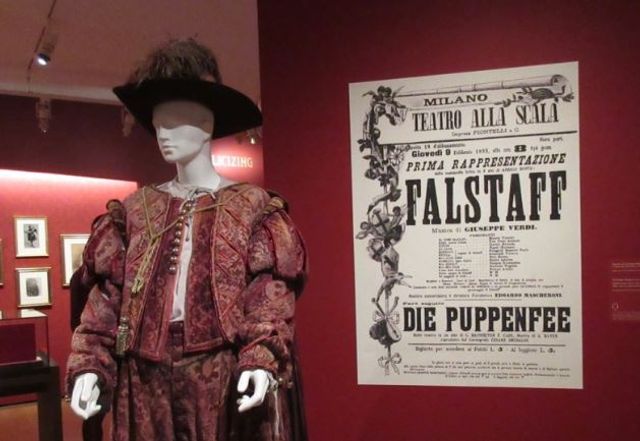 Costume for Falstaff from 1980-81 season in Milan

At the same time, it must also be stressed that Verdi himself was no accident. He was the magnificent musical heir to the Enlightenment tradition, a man who knew some Shakespeare even before the famous playwright’s work was performed on stage in Italy, a man who scorned organized religion and reflected some of the most progressive elements of social life in the mid-19th century.

The genius of Verdi found expression in what could be termed the dialectic of his musical development. He was steeped in tradition and he insisted on a bond with a broad audience, but he never stopped struggling to develop his art. He neither discarded the music of the past, nor simply repeated himself. The results were masterpieces that preserved and at the same time developed and helped transform the operatic form, in turn laying the basis for operas of the 20th century.

Perhaps the words of the English musicologist Roger Parker describing Falstaff are a fitting summation: “The opera leaves us with a musical image that exactly reflects those famous photographs of Verdi in his last years: an old man, in black hat, with eyes that have lived through a lifetime of struggle, smiling out wisely to the world.”