More than 30,000 teachers and staff strike in Chicago, Illinois

Pickets appeared at Chicago Public Schools city-wide Thursday morning as 32,000 teachers and staff struck for the first time since 2012. Educators are fighting for smaller class sizes and more nurses, librarians, social workers and other support staff, along with increased spending to improve conditions in all schools.

Teachers are determined to fight the decades of austerity imposed by the Democratic and Republican parties and to win what they and their students need.

The Chicago Teachers Union (CTU) is working closely with Democratic Party politicians who control the city to shut down the strike as quickly as possible and impose an agreement that conforms to the city’s demands. 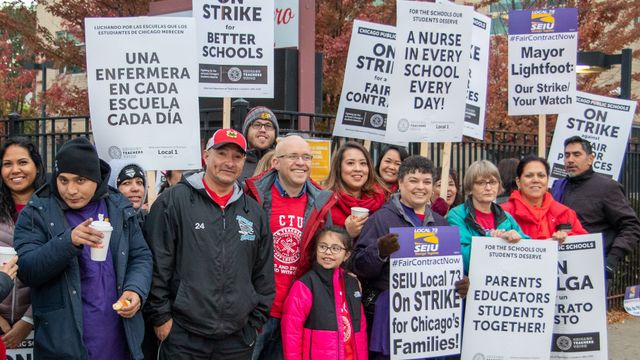 Picketing teachers and supporters in Chicago

There are fears that the growing wave of walkouts among teachers, autoworkers and other sections of public and industrial workers will lead to a general strike. The announcement of the teachers’ strike was followed immediately by moves by the United Auto Workers to end the strike by GM workers on the basis of a contract that accepts all the demands of the company.

Thursday evening, the CTU reported that the strike would continue Friday. Over the weekend, CTU President Jesse Sharkey announced the union had found a “path to settlement” with the school board, in which it agreed to modify demands for the needed library, social worker, nursing and other support staff on the basis of CPS “phasing-in” critically needed staff—empty promises that teachers have heard before.

Elena is a middle school support staff worker on the southwest side. She told the WSWS, “The funding cuts have affected the staff and students tremendously. We’ve lost a couple of support staff positions and teaching positions. We don’t have enough counselors, we don’t have a nurse.

“At least we still have a librarian, but over the years we have seen many declines, and I think that this is the hardest-hit year. I’ve heard about Tax Increment Financing going to many things and taking away from the schools. Money goes to predominantly wealthy neighborhoods. I feel that we get passed over.

“Class sizes are important to us,” Elena said, “but so is the quality of support that the students get. Our counselors counsel the kids, but they are also made to do a lot of other extra duties.” She said that teachers “want to teach, not stay in the office doing paperwork and wearing different hats because they have to also be the nurse and the counselor to the students that come in emotionally distressed. We need books, resources and technology to take students into the 21st century.

The fight to defend public education is part of a broader struggle by workers worldwide to oppose decades of increased exploitation, the destruction of public education, and cuts to health and social services that have sharply increased social misery while enriching the financial aristocracy.

In Chicago, Los Angeles and many other major urban areas, the corporate-backed assault on public education has been spearheaded by the Democratic Party.

Chicago is one of the most unequal cities in America, with the wealth and income gap growing each year, driven by tax cuts and incentives to big business and a small but steady increase of new arrivals among top income earners. This shift has been engineered in large part by the Democrats’ relentless attack on social services and infrastructure like public schools, mental health clinics, and bus transit.

None of these issues were addressed in the remarks by AFT President Randi Weingarten at the downtown rally on Thursday, after which about 1,000 marched. Sharkey and Weingarten, who makes close to $500,000 a year, made demagogic statements appealing to Mayor Lori Lightfoot who has rejected increasing school funding.

Lightfoot indicated Thursday morning the city would not increase spending on public schools: “We’re not moving any further on money because we can’t.”

The cap on school funding is being imposed by Wall Street, whose interests the Illinois Democratic Party defends. The day before teachers walked out, the credit rating agency Standard & Poor’s warned that any increase to the CPS budget to accommodate the teachers’ demands could result in a downgrade of the district’s credit rating.

The city of Chicago has been paying between $700 and $800 million per year to service public debt since 2008, which is roughly the same amount the state legislature has said in 2017 it would provide to Chicago Public Schools annually.

Diana, a special ed teacher at Douglas Taylor on the far south side, was picketing with her colleagues. “We’re out here because we need more resources. We had 465 librarians ten years ago. We’re down to 110 and getting less. The fine arts program in CPS consists of a random substitute teacher and a coloring sheet.”

Senn High School arts teacher Rob said, “We haven’t had a real raise and we were furloughed for many years, and we are trying to make up ground in this contract.” 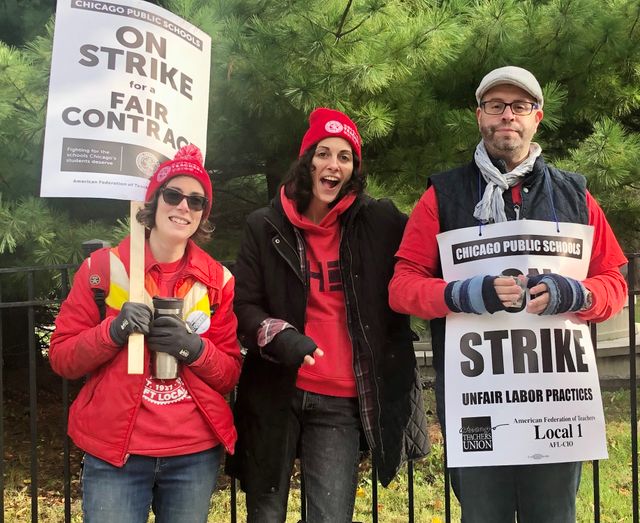 Teachers are determined to fight, and they have widespread public support. However, striking educators face danger: if they do not take control of the strike, the terms of the capitalist class will be imposed on them once again in what could be a five-year contract, as Lightfoot is demanding.

In recent years, as record profits were recorded by major US corporations, a state and municipal budget crisis was used by Democratic and Republican legislators to slash spending on K-12 education, community colleges and universities in Illinois.

Major concessions were extracted from teachers and staff with the critical aid of the CTU, including the introduction of a second tier of pension benefits for hires after January 2017, increased healthcare costs, furloughs of teachers and staff and virtually nothing for classroom needs like books, computers and supplies.

Those cuts were prepared by the betrayal of the powerful 2012 teachers strike, when the CTU shut down the seven-day strike by 26,000 CPS educators just as it was to confront the Obama administration. The administration led the attacks on teachers with “Race to the Top,” a program rewarding districts for introducing merit pay, lifting caps on charter schools and implementing punitive teacher “accountability” schemes based on standardized test scores.

The CTU’s betrayal of the 2012 strike prepared the way for then-mayor Rahm Emanuel’s closure of 49 public schools and the layoff of higher-paid veteran teachers. In exchange, the American Federation of Teachers was permitted to unionize the lower-paid charter schoolteachers and expand its dues base.

Teachers also expressed their interest in expanding their struggle as well as their worries that CTU would once again help the Democrats impose the dictates of the financial aristocracy.

Elena said, “When you’re struggling day to day, it’s definitely about money, but also the conditions that you’re working in. I can’t even imagine the conditions that the workers at General Motors are working in. I think that there is a lot of anti-union sentiment that’s being promoted, but really the working people need to have some kind of organization to support each other. I don’t know how I’d begin to raise awareness, but I think that people need to have awareness of each other’s struggles.

She continued, “The CTU kind of looks out for themselves and says they are fighting for the teachers, but I don’t feel they are really trying to fight for us. I know people will say things like oh, you don’t want to be anti-union, but I think that the CTU forgets about the everyday people. I think there are probably more people who share those thoughts. When you ask these kinds of questions you may get questioned as to whether you are pro- or anti-union, but I think it’s important to ask them.”

CTU is hurrying to conclude an agreement on terms dictated by Lightfoot. 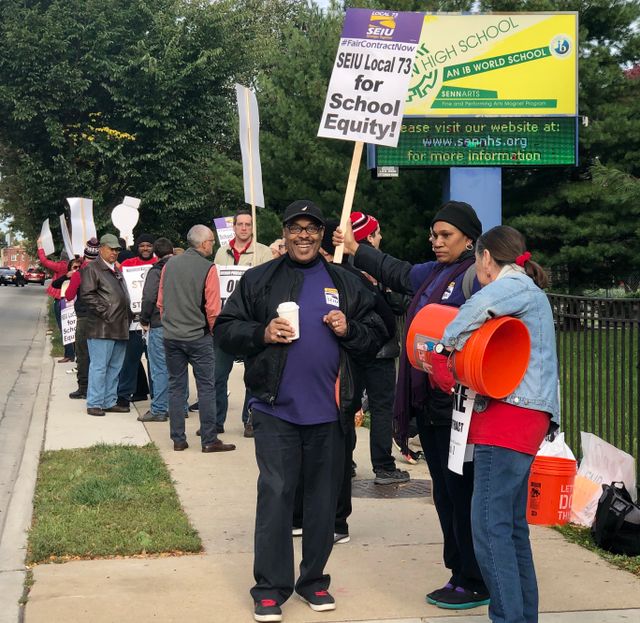 Teachers can and must win this battle. The lesson of the last two years of teacher struggles from West Virginia to California is that educators must take the conduct of the struggle out of the hands of the Democratic Party-aligned, pro-capitalist unions.

This requires building their own rank-and-file committees, in each school and neighborhood, to organize a fight for what the schools and students need, not what Wall Street, the corporations, and the Democratic and Republican parties say is affordable.

To provide the resources needed to improve schools and neighborhoods, eradicate poverty and raise the material and cultural level of the whole population, teachers must carry out a frontal assault on the wealth and power of the super-rich, to radically redistribute the wealth created by working people to meet their needs.

We urge teachers to subscribe to the WSWS Teacher Newsletter, which will do everything possible to provide Chicago teachers with a voice and perspective for this struggle, assist them in building rank-and-file committees, and link up their fight with autoworkers and other sections of the working class.