The UAW shut down the Mack Truck strike Friday morning after announcing a tentative agreement the night before.

The details of the agreement, which was reached behind closed doors, have not yet been released. Workers were informed of the agreement and the decision to send them back to work in a letter late Thursday evening from UAW Director of the Heavy Truck Department Ray Curry.

Mack Truck workers should not expect anything but a concessions agreement. As at General Motors, the UAW will attempt to pull a fast one on them, forcing them to vote on the contract before they have had adequate time to study the details. While at General Motors, the UAW decided it would not be able to send workers back to the plants before voting without risking a rebellion, at Mack Truck the union is moving more aggressively to dissipate the momentum of the strike by sending them back to work. 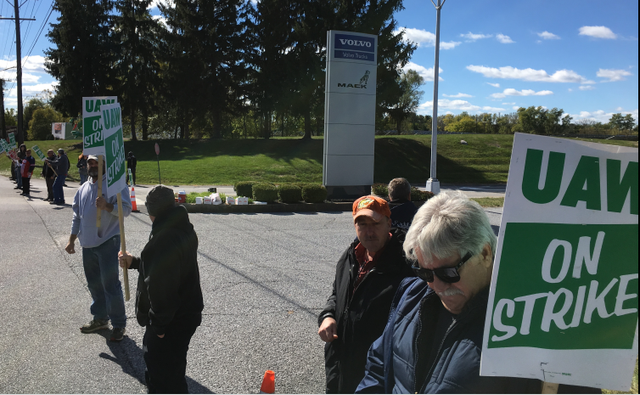 Workers voiced suspicion on the UAW Local 171 Facebook page. One worker said, “I thought we vote first before anything. I want to know more details!”

From the beginning, the UAW sought to sabotage the struggle. It only called a strike after keeping workers on the job for nearly two weeks after their contract expired on October 1. When it finally called the strike, the UAW forced workers to subsist on starvation strike pay of $250 per week and subjected them to an information blackout, even after talks resumed earlier this week.

Moreover, the UAW kept 3,000 workers on the job at Volvo Truck’s New River Valley plant in Virginia, even though both Volvo Trucks and Mack Truck are both subsidiaries of the Volvo Group. The New River Valley plant operates on a separate contract, with a separate expiration date, to prevent workers from both companies joining in a common struggle.

The strike eventually shut down production at New River Valley, which relies on the engines, transmissions, and axles that are produced by the Mack Powertrain factory in Hagerstown, Maryland.

However, laid-off workers at NRV will not receive the supplemental unemployment benefits (SUB) to which they are contractually entitled because Volvo has characterized the work stoppage as being vendor related. UAW officials have not made any indication that they will do anything to oppose this.

Disbursement of strike pay is also being held up, and in comments there seems to be a further delay in the distribution of strike checks to this weekend. “Knowing that we weren’t going into an agreement with the company why weren’t these checks prepared and done sooner?” one worker said on Facebook. “We are now going into the second week and are only receiving pay for one week. Now you want to delay it more? Families are hurting here in this strike and everyday counts when it comes to paychecks.”

A worker with 20-year seniority at the NRV truck plant spoke to the WSWS Autoworker Newsletter said, “I hope that Mack holds out for what they need because that’s going to affect our contract that’s coming up.”

On the question of SUB pay, she said, “It shouldn’t be a ‘supplier issue’ or a ‘vendor issue’ because Volvo owns Mack. How can they call Mack a vendor if they are a subsidiary? They are saving lots of money by not paying sub pay and wages.” However, even if the company dispensed SUB pay, she said, the checks going to workers would only be $250 per week.

“We made a lot of concessions in 2008-09, when the tier system came in. [They] told us all that mess about competing with Mexico and we still made all those concessions. Volvo is not interested in giving people their money back. Management gets raises. Compete with Mexico means put money in their pockets.”

The heavy-duty truck manufacturing industry has broken records in orders and production in recent years, but according to Transport Topics a slowdown occurred this year. According to industry analyst Steve Tam, a 300,000 truck backlog of unfilled orders spilled over from 2018, and there is an almost a yearlong delay in order fulfillment. Mack-Volvo Trucks have a combined 17 percent market share in the North American market, which produces 250,000 trucks annually.

The UAW will undoubtedly push through their sellout at Mack Truck by claiming, as they always have, that cuts are necessary to maintain “job security,” to discourage the company from seeking lower labor costs in Mexico or other countries. This “America-First” nationalism enables global companies like the Volvo Group to whipsaw workers in different countries in a global race to the bottom.

But the Mack Truck strike has taken place in the midst of a broader resurgence of the class struggle all over the world, including not only the strike at General Motors, but mass demonstrations in France, Chile, Ecuador, Puerto Rico, strikes in the auto sector in Mexico and South Korea, a global wave of teachers strikes stretching from Chicago to the Middle East. This poses the need for workers to unite internationally in order to fight the cuts to wages, benefits, and conditions demanded by multinational corporations.

To defend against the sellout agreement, workers must form their own independent rank-and-file committees to link-up with the struggles of other sections of workers, including at General Motors, Ford and Fiat Chrysler, and other industries throughout the world and internationally.