On October 21, Democratic Party presidential hopeful Elizabeth Warren released her plan for public education titled “A Great Public School Education for Every Student.” The next day she appeared at a picket line of striking Chicago teachers where she was hailed by American Federation of Teachers (AFT) President Randi Weingarten. The AFT president said, “If she is in the White House, we wouldn’t need to be in the streets. We will be in the schools making America what it ought to be.” 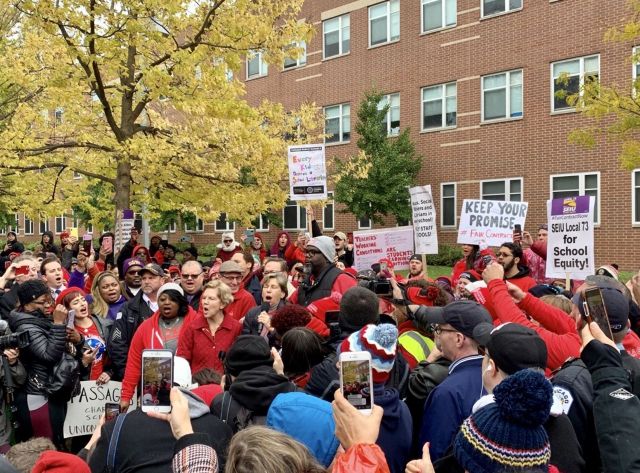 Getting teachers “out of the streets” is a mutual aim of the Democratic candidate and the millionaire union executive, who carried out their joint photo-op as part of the effort by the AFT and the Chicago Teachers Union (CTU) to shut down the strike on terms dictated by Democratic Mayor Lori Lightfoot.

Vying for the endorsement of the teachers unions, Warren is promoting herself as the “education candidate.” The plan was drawn up in reaction to the upsurge of teachers over the past two years and the overwhelming popular support for the fight to defend and improve public education. The latest offering by Warren seemingly models itself on Bernie Sanders’ “Thurgood Marshall” plan, released earlier in the year.

The Warren plan acknowledges the crisis gripping schools across the nation while claiming that everything can be fixed under capitalism. An open defender of the system, she disavows the “democratic socialist” label adopted by Sanders. She hopes thereby to serve as a political lightning rod, diverting the growing resistance of radicalized workers and youth into harmless channels while garnering sufficient support within the ruling class to win the nomination of the Democratic Party.

Tacking “left,” her education policy strings together promises, pledges to “push for change” and band-aid remedies, all of which are inadequate to deal with the fundamental crisis of public education in America.

Warren calls for a quadrupling of federal funding for low-income Title I schools, at an estimated cost of $450 billion over a decade. She suggests a $100 billion competitive grant program for which districts could apply to fund after-school art programs, mentoring, or the upgrading of science facilities. This would mean, as with Obama’s Race To The Top, schools would be pitted against each other in the hopes of receiving nominal funding for essential programs.

Additionally, she advocates addressing the collapse of school infrastructure with $50 billion, with another $20 billion annually for Individuals with Disabilities Act (IDEA) funding.

It should be noted that the State of Our Schools report, released earlier this year, says $145 billion is needed every year to modernize and maintain U.S. public school facilities—nearly three times what Warren is proposing. As for IDEA funding, Warren’s $20 billion would only partially cover the legal mandate of 40 percent federal support.

Both Warren and Sanders say their education plans will be paid for by a “wealth tax,” which they know full well that neither the Democratic Party nor Congress would support. Warren’s plan would levy a 2 percent tax on wealth above $50 million and a 3 percent tax on wealth above $1 billion. Sanders increases the tax brackets and the total tax with the further call for a “national wealth registry” to track down the money.

As these seasoned capitalist politicians know, a few European countries attempted such taxes and abandoned them when the rich simply relocated themselves and/or their wealth. The wealthy park their vast fortunes in tax shelters around the world. They will not submit to even the slightest incursion into their wealth.

This is most clearly shown by the response of ruling classes all over the world to the eruption of working class struggles in opposition to social inequality. Far from enacting progressive reforms as concessions to the demands of workers, governments are stepping up police repression and encouraging the growth of far-right and fascist forces. This is the case in Britain under Boris Johnson, France under the pro-Petain president Emmanuel Macron, Germany, whose government is promoting the neo-fascist Alternative for Germany, and the U.S. under Trump.

She promotes the fiction that one of the best ways to raise teacher pay permanently is to “make it easier for teachers to join a union.” She pledges to support the collection of agency fees and oppose right-to-work laws, citing her support of the Public Service Freedom to Negotiate Act.

Decades of experience, including the 2012 betrayal of Chicago teachers, which opened the floodgates for the closures of dozens of schools, have demonstrated the opposite. Throughout the struggles of 2018-19, the AFT and National Education Association deliberately isolated teacher strikes and forced through settlements that failed to meet teachers’ cost of living or defend decent healthcare and benefits. In the aftermath of recent settlements in Oakland, Denver and Los Angeles, hundreds of staff have been eliminated and more schools have been closed, with the collusion of the unions.

In her effusive praise for the unions, Warren is working consciously as a representative of the ruling class seeking to suppress a brewing rebellion of the rank and file against these anti-working class organizations.

It is highly significant that both Warren and Sanders make segregation and racial discrimination a central focus of their plans, in line with the Democratic Party’s promotion of identity politics. As usual, this is a diversion and has nothing to do with actually improving conditions for the most impoverished. 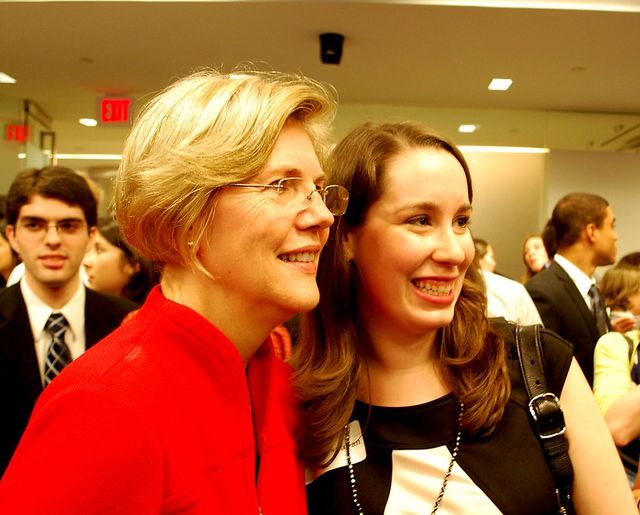 In every serious struggle, as the struggle of the Chicago teachers shows once again, workers of all races and ethnicities stand shoulder-to-shoulder. The intransigent opponents of the Chicago teachers take the form of a multiracial city administration and first black female mayor, who also happens to be gay. Democrat Lightfoot has insisted, there is “no money” for schools and teachers’ demands.

It is the Democratic politicians and their upper-middle class pseudo-left acolytes who inject race and gender, in a deliberate effort to sabotage the solidarity of teachers, school employees, parents, and students.

Moreover, while racial segregation in schools has increased, this segregation is overwhelmingly driven by the growth of poverty. The disproportionate effects of poorly-funded and segregated schools upon minorities reflect the fact that blacks, Hispanics and Native Americans continue to suffer disproportional poverty. “African Americans and Latinos are in schools that are overwhelmingly poor,” stated UCLA professor Gary Orfield in a recent study. Rather than redlining or racism, as Warren claims, it is the 40-year-long social counterrevolution overseen by Democrats and Republicans that has dramatically increased extreme poverty, crowding working class minorities into poor housing and increasing segregation.

Warren is using the race card to divert attention from the inherently anti-capitalist demands of educators for full funding of public education, including the additional hiring of tens of thousands of well-paid teachers, librarians, counselors, paraprofessionals, and the construction of high-quality facilities with full wrap-around services.

As for her answer, Warren calls for “renewing the fight against segregation and discrimination” through another competitive grant, her Housing Plan for America. The competition would be open to states and cities to apply for “money to build parks, roads and schools” if they make zoning law changes. She also calls for more “teachers of color,” “culturally relevant curricula,” and “a more diverse school leadership pipeline.” She adds a feminist twist, calling for nominating “judges who look like America” not “overwhelmingly white and overwhelmingly male,” adding that “educators, particularly women, have carried the Red4Ed movement.”

Warren does not oppose the Wall Street drive to privatize public education, measures that were vastly accelerated under her Democratic Party colleague Barack Obama. In 2003 she supported vouchers and in 2015 she insisted on the use of standardized tests to measure schools, a key vehicle designed both to enrich testing companies and to attack public education.

She now supports the NAACP’s call for a moratorium on charter school expansion until further studies are completed (as if the effect of charter schools cannibalizing their public school counterparts were not known). Warren has no problem with charters, as she has no problem with the capitalist “free market” but decries their “lack of accountability” and de facto segregation.

Warren has called herself a “capitalist to the bone.” That is accurate. She has made no secret of her worries, on behalf of the capitalist class, that the terrible growth of social inequality has fueled not just a growing upsurge of educators, but portends a wholesale political break by the working class with the two parties of big business and the system itself. 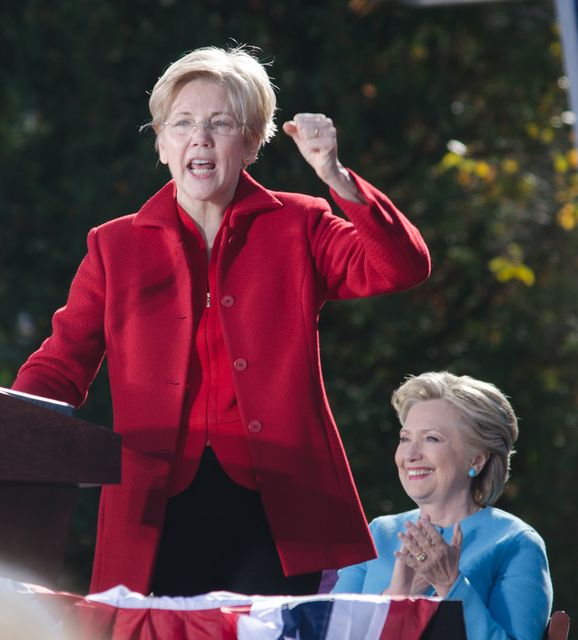 In a speech at the National Press Club last August, she emphasized the growing hostility of the population to the US government. She referenced a poll showing that at the height of the Vietnam War, 1968, which was also the year of the assassinations of Martin Luther King and Bobby Kennedy, 62 percent of Americans said they trusted the government. She noted that the number dropped to 36 percent after Watergate and the resignation of President Nixon, but is now at only 18 percent. She termed this phenomenon “a turn away from democracy.” What she really is talking about is a turn away from capitalism and toward socialism, especially among the younger generation.

Elizabeth Warren’s rebranding follows a long history of right-wing politics. Growing up in a Democratic household, she was described in the 1980s by friends as an “ice-cold Republican.” A Reagan supporter, she remained a Republican in the midst of a social counterrevolution against the economic safety net targeting virtually every federal program from food stamps to education to funding for the arts. Warren associated herself with wealthy conservatives such as John Olin, and became a devotee of the “Law and Economics” school of right-winger Henry Manne.

As a corporate lawyer in 1995, Warren represented LTV Steel, a conglomerate formerly involved in aerospace, airlines, pharmaceuticals and steel, seeking to avoid compliance with a federal law that required funding the healthcare of retirees after bankruptcy. Warren petitioned the Supreme Court, arguing that the payments, as per the 1992 act, would undermine the sanctity of the bankruptcy code. Nearly 100,000 retirees faced losing their company-paid healthcare.

In other such lucrative bankruptcy work, she represented Dow Corning in 1995 as it sought to limit payments to its breast-implant victims. The company was later found to have deliberately deceived women over the dangers of the silicone implants. Another corporate client, Union Pacific Railroad, engaged her services to avoid paying for the cleanup of an oil and industrial waste disaster at the Tacoma, Washington rail yards.

Having established herself as a trusted force for the financial elite, she was tapped by Democratic Majority Leader Harry Reid in 2008 to head the congressional oversight panel on the Troubled Asset Relief Program (TARP). She became its chairperson.

Warren gained a name for herself during the TARP hearings by falsely claiming to represent consumers. Her protestations and exhibitions of indignation served as a lightning rod to divert mass anger against the multi-trillion-dollar infusion into the stock market. They served to provide political cover while Congress rubber-stamped the project.

In sum, Warren played an essential role. She served as a phony “left” cover while the greatest transfer of wealth from the working class to the rich in world history took place. This process set in motion, at the other pole of society, an unprecedented assault on the living standards of the working class and the record growth of social inequality. Funds for public education, like every other social program, were eviscerated and have never recovered.

Capitalism today faces a far more pronounced crisis, and the working class around the world has entered a new stage of the class struggle. Warren and Sanders and the Democratic Party as a whole are mounting a doomed effort to prevent the widespread turn to socialism and revolutionary struggle.